World Hunger and the Veg Solution 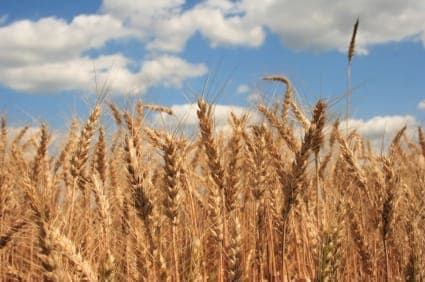 enough grain for all to be fed

Now that we have made it to the beginning of a new year, everyone is ready to start fresh. Call it a resolution, or just a response to the excess of the holidays, but it might be a good time to look at eating more plants. Whether omnivore or vegetarian, we all seem to end up eating too many empty calories, too much rich food, and too few veggies. If you want to keep it simple, just make your resolution to veer toward the plant based dishes this year.

If you want some motivation, it may help to know that, as Moms across America used to say: “there are people starving in (fill in the blank) who would love this food.” Now, your Mom was trying to get you to finish the food on your plate, and chances are, it was not vegetarian. Still, her heart was in the right place. There are people starving, 1.02 billion of them, to be exact.

And while I am not so naive as to believe that hunger is about lack of food, there is a glaring solution that could be employed. We have known since the ’70’s that if we simply stopped feeding all the plants we raise to livestock, we would have enough plant food to feed everyone. At its most simple, the equation of making meat from plants is wasteful, and makes plants into meat for the affluent countries of the world. It takes up land and resources that would make it possible for that billion-plus people to have plenty to eat. Of course, most hunger is political, with wars and profit driving the shortages.

Currently, worldwide 40% of the grain grown is fed to animals, and in the US, 70%.This will only get worse as the global appetite for meat is growing, and meat production increased from 71 million tons in 1961 to 284 million tons in 2007. Add to that the fact that some of the most hard hit countries in South Asia and Sub-Saharan Africa are also bearing the brunt of climate change, which will cause crops to fail.

When people are hungry, it is children and women who suffer.

In a  joint report by Concern Worldwide, the International Food Policy Research Institute (IFPRI) and German NGO Welthungerhilfe found that the lower the level of literacy and educational access among women in developing nations, the more likely they are to experience persistent hunger. They believe that by equalizing the status of men and women, 13.4 million fewer malnourished children would exist in South Asia and 1.7 million fewer in Sub-Saharan Africa.

And where there is hunger, children die. 45% of the child deaths in the world occur in India, Pakistan, Nigeria, Ethiopia and the Democratic Republic of Congo, a figure that continues to escalate each year.

And don’t think it’s just in developing nations. The USDA released its annual report on Food Insecurity, and found that in 2008, 17 million American households were food insecure. That is way up from the 11.9 million in 2007. While Americans waste more food than anybody, throwing away about 1400 calories per day, others go hungry.

It’s frustrating and depressing to think about, to be sure. We can only do our part by wasting less, eating lower on the food chain, and giving as much as we can to combat hunger. As much as we should not be fooled by empty gestures, like putting in a new lightbulb and then feeling that you’ve done your part, veg is powerful.

The less meat we consume, the less meat will be made. I know right now the veg community is small, in the big picture. But Americans need to stop driving the machine.

If you needed a little motivation for your New Years Resolution, maybe thinking about all those hungry people will help. Don’t be an ugly American, cut back and leave a little for the rest.

You might just feel better, look better, and live longer, so why not?