Kansha, More Than A Cookbook 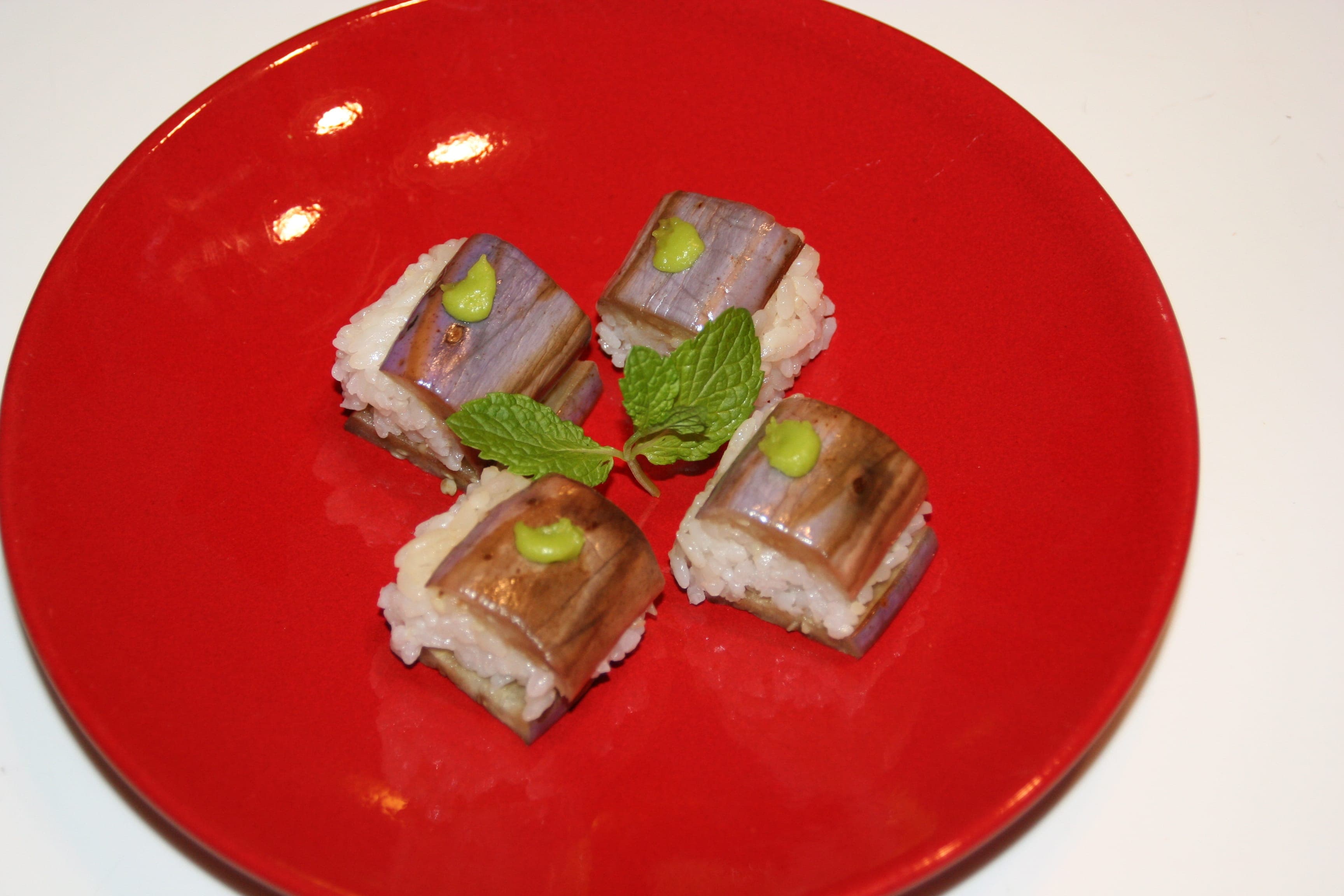 I made the Eggplant Sushi

A cookbook is, by definition, a collection of recipes. What makes each collection unique is the overall philosophy and organizing principle that shaped the group of recipes within. There are healthy cookbooks, decadent cookbooks, and cookbooks for just about every approach to food.

It’s rare, though, to see a cookbook that expresses a deeper philosophy, and then really  brings it to life in every step, every dish, and every photo.

Such a book is hitting stores soon, Kansha, Celebrating Japan’s Vegan and Vegetarian Traditions by Elizabeth Andoh (Ten Speed Press $35). Kansha is the Japanese word for an approach to food that wastes nothing, using every edible part to prepare nutritious, beautiful meals, while preserving energy and resources. It also is vegetarian. It’s also true to its Buddhist roots, by presenting the cooking process as a meditation on your gratitude for the food and the work of everyone who brought it to you.

A short word, but a big thought.

And a big, beautiful book, with mindfulness in every recipe.

Full disclosure, I am proud to count Elizabeth Andoh among my friends in the world of food, and to have discussed Kansha with her back when she was in the process planning and developing. At the time, she was making decisions about how to translate traditions from Japan to the American vegetarian.

She succeeded, and in doing so, has created a new classic, and a book that will be essential to any Vegetarian or non-veg who wants a taste of Temple cookery. In the history of meatless cuisine, the Buddhists of Japan have a pivotal role, practicing a meatless lifestyle since the 6th century. Shojin Ryori, which translates as “earnest effort” is a style of cooking that relies on simple, pure ingredients prepared in often laborious ways. Andoh has adapted recipes that will work in the home kitchen, to give you a feel for the real thing.

Kansha also contains Andoh’s takes on macrobiotic fare, which is an eating style inspired by Japanese ideas. She adds some truly traditional dishes that are easily made vegan, and then creates some recipes that bring the Kansha ethos to simple, modern dishes that cooks may find exciting and maybe even familiar.

Andoh’s previous book, Washoku, Recipes from the Japanese Home Kitchen (Ten Speed Press $40) was also a lesson in a Japanese way of thinking. Washoku brought Japanese ideas about balancing color on the plate to balance both nutrition and aesthetics to the American audience. The idea of balance bubbles through both works.

Andoh is a much respected teacher, and takes the time to describe every step of the process, whether it is washing rice or forming a dumpling. Implicit in all these loving descriptions is the Kansha aesthetic, as you are guided to make an earnest effort, pay attention, and do it right.

Depending on your pantry, you may need to make a trip to a Japanese foods store to make many of these recipes. Luckily, once you stock up on dried kampyo (gourd strips) misos, sea vegetables, Japanese rice, and some seasonal veggies, you should be good to go.

In cooking from Kansha, I was impressed by how timeless the message of frugal, environmentally sound kitchen practices is. The recipes are so mindfully presented that you can’t help but absorb Kansha like a delicious marinade. Sure, I followed a recipe to make a tasty eggplant sushi, and along the way, I thought about the rice, the eggplant that I bought from a farmer that morning, and about using the skin of the eggplant as a kind of mock-eel. I already compost my trims, but Kansha takes it to another level, suggesting that you make crisps from your veggie skins, and finding ingenious ways to serve every little bit.

In a generous gesture, Andoh is also hosting a website for the book, where she will post lessons and share her vast knowledge with us on the web. go to www.kanshacooking.com for a taste of that.
And Thanks to Elizabeth Andoh, for creating an entry into this peaceful world.