Austin, Weird and Wonderful with IACP

Veg Authors at Koriente:Ann, Me, Jill and Ellen

One of the best things about writing cookbooks is that I belong to a unique community of food professionals. We food writers can lead a strangely solitary existence, staying home to test recipes and type, or indulge in the unnatural act of photographing our food so that we can post about it.

Seriously, think about it, the correct response to a plateful of hot food is to dig in, not to grab your cell phone to snap a shot, or set up a tripod and start aiming lights at it.

But once a year, I break away from my kitchen and go to a conference with my fellow food people, the International Association of Culinary Professionals. The group is open to anybody making a living in food, so there are restaurant chefs, writers, editors, publishers, teachers, historians, TV and video producers, photographers and stylists, manufacturers of food and cookware, representatives of various foodstuffs, and more. Every year a different host city organizes a bunch of events to show off their food scene, and we converge on the city to take a big bite of what they have to offer.

This year, we traveled to Austin Texas, where a thriving alternative food scene co-exists with Texas barbecue and longnecks. “Keep Austin Weird” is a local slogan, and I’m all for it. One of our speakers was Jim Hightower, http://www.jimhightower.com/an outspoken populist who counts food activism as part of his mission in life. I’ve always been a fan, and he delivered a funny, heartfelt talk about the importance of fighting for our food supply. His humorous one-liners and wry way with absurdity kept the crowd laughing at the early morning session, even as he talked about sustainable food and regulating the corporations that make our food supply less safe. I even got to ask him about the NRDC lawsuit I wrote about in last weeks post, and he was optimistic that the effort to ban antibiotics from animal feed could be won. 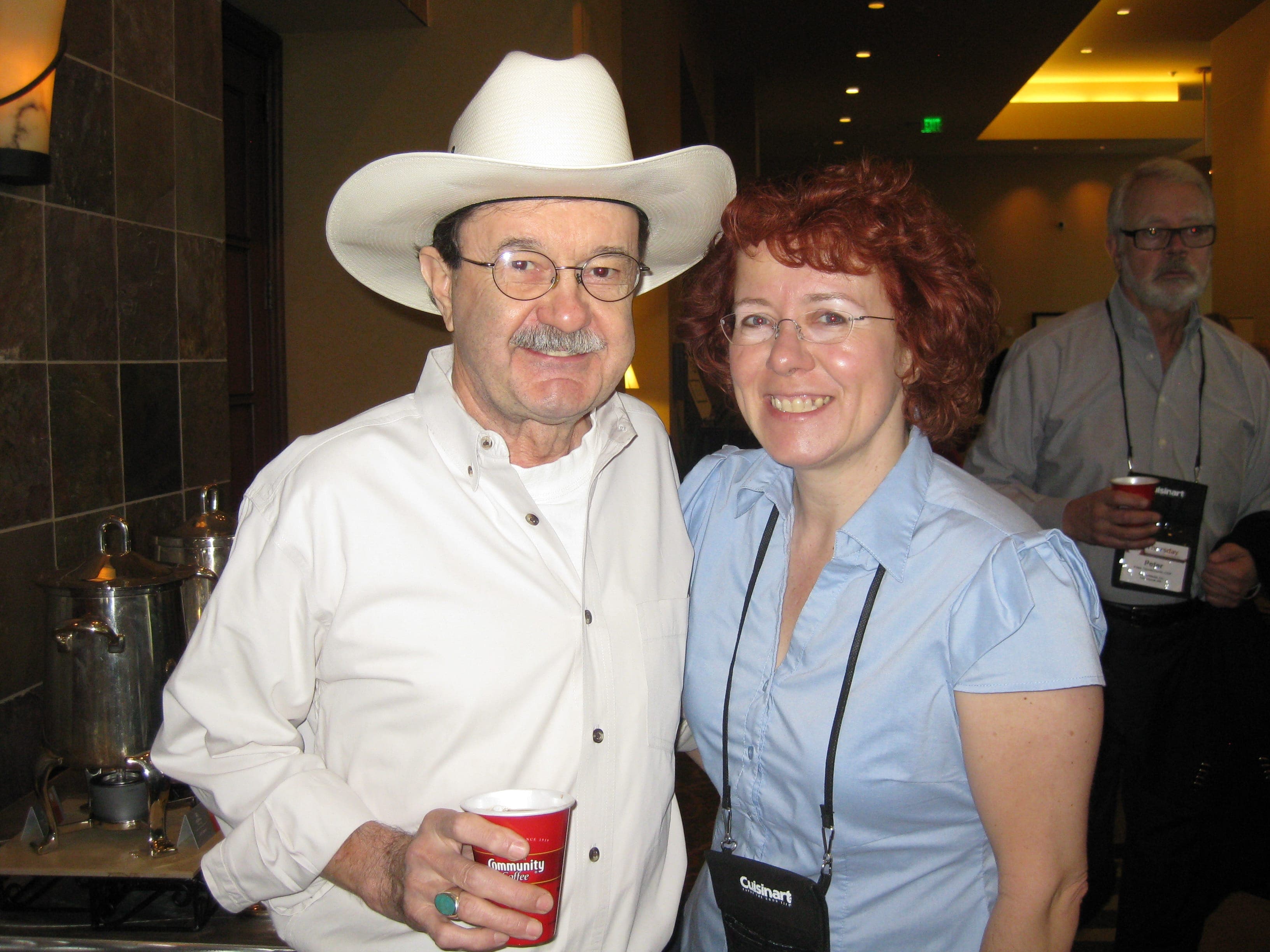 Another seminar, a panel lead by Kim O”Donnel, author of the Meat Lovers Meatless Cookbook, centered on the Changing Place of Meat on the Plate. This was a discussion about sustainable meat, more than vegetarianism, although Meatless Mondays and cutting back on meat were definitely promoted. Panelist Ralph Loglisi, from the Center for a Livable Future, was there to bring the facts about our unsustainable levels of meat consumption to light. He blogs here: http://www.livablefutureblog.com/

I also went to lots of seminars on things like how to do a good TV spot, demonstrated by Ellie Krieger, how to be a good radio guest, with Kathy Gunst, how to edit video for blogs, with bloggers Chef John and Average Betty and videographer Daniel Klein http://www.theperennialplate.com/, and more. There was a seminar on the new electronic world of cookbooks, and there were cooking demonstrations by John Besh and Jacques Pepin that were entertaining and inspiring.

A favorite moment was when a blogger told Jacques Pepin she was glad to see he had a twitter account, and he replied, “I do?” and after the laughter, she asked how he adapts to the new world of social media, and with his Gallic nonchalance, he replied, “I don’t.” Of course, Jacques will be fine, letting someone else write his tweets and letting the brave new world of e-books and apps court him, while the rest of us have gotten the message that the internets and social networks are a vital part of reaching our audiences, so we gladly attend seminars on blogging and tweeting.

And in between all this, I got to spend time with some of the smartest, funnest people I know, the collection of dear friends from all over the world that I have connected with at IACP for years now. There were dinners at gourmet destinations like Parkside and Fonda San Miguel, a food truck party, a reception at the Art Museum with local fare, and I even got to make a break to the Austin Farmers Market. 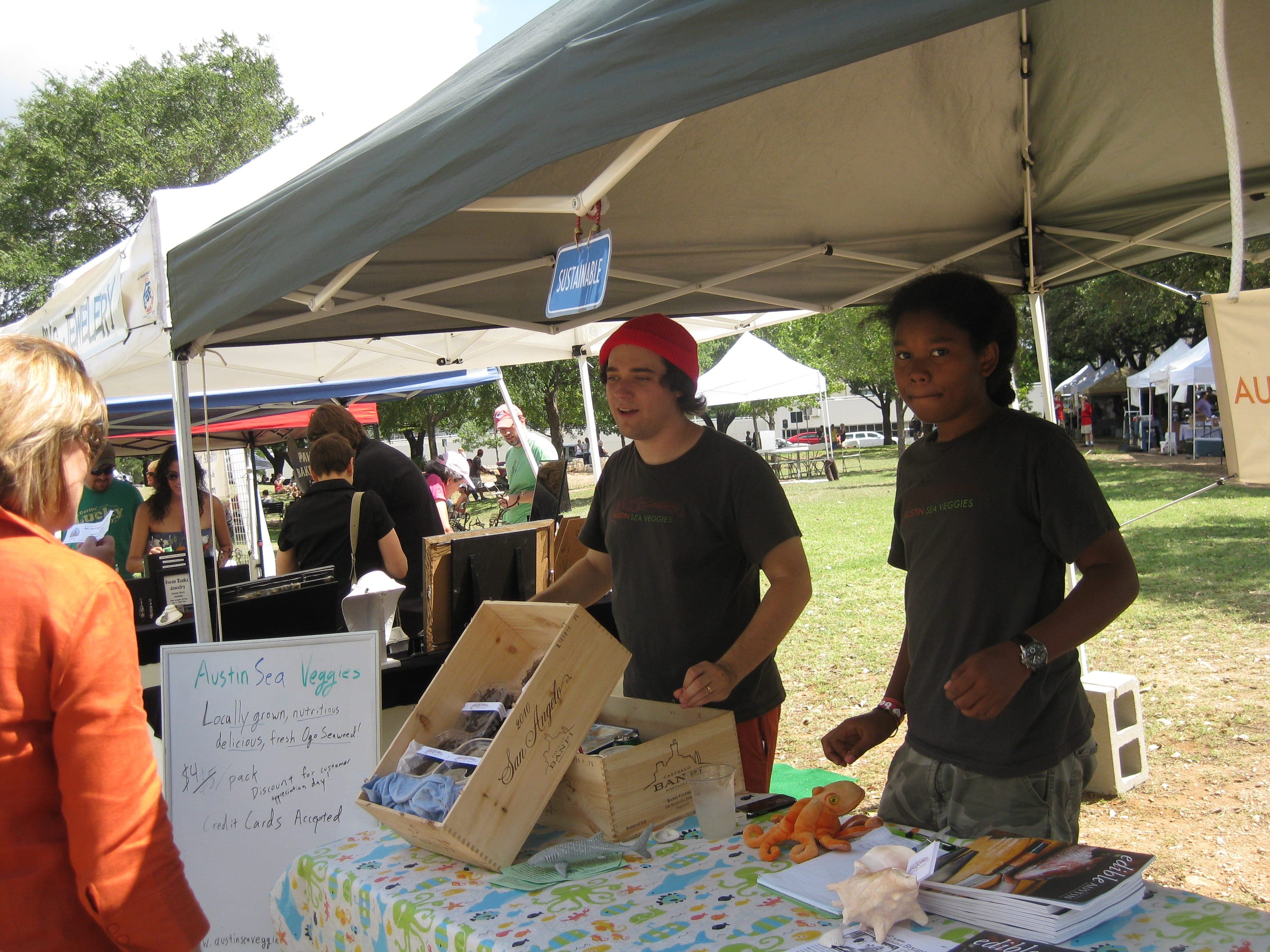 A unique offering was this stand, where a young man with a degree in Molecular and Cell Biology, named Lewis Weill, sells cultivated Ogonori, a variety of sea vegetable. The fine, crisp strands of ogonori were a revelation, so unlike the dried kinds of sea vegetables that I have always loved. Lewis has a day job as a biologist, and in his spare time, grows this nutritious veggie in tanks of purified water enriched with salt and minerals to to make a cleaner version of sea water. He is an unassuming visionary, who wants to save the oceans and also provide a clean seaweed that isn’t bathed in the pollution that has become a problem in wild-harvested sea plants.

One lunch that I organized was to bring together the vegan and vegetarian food writers for a veg meal. I invited Ann Gentry, chef and owner of Real Food Daily in Los Angeles and author of Vegan Family Meals, Jill Nussinow, the Veggie Queen, author of The Veggie Queen, Vegetables Get the Royal Treatment, and The New Fast Food, The Veggie Queen Pressure Cooks Whole Food Meals in Less than 30 Minutes, and Ellen Kanner, author of the Hungry Ghost and Edgy Veggie, who pens a Meatless Mondays column for Huffington Post, a syndicated column  The Edgy Veggie, and freelances for publications like EveryDay with Rachel Ray Bon Appetit and Culinate.

We walked over to a wonderfully weird little spot called Koriente, where a Korean cooking style blends with a whole foods approach, and most of the menu is vegan, although meat and fish are available. We all really enjoyed the brown rice and fresh veggies, and Korean hot sauce and nori. 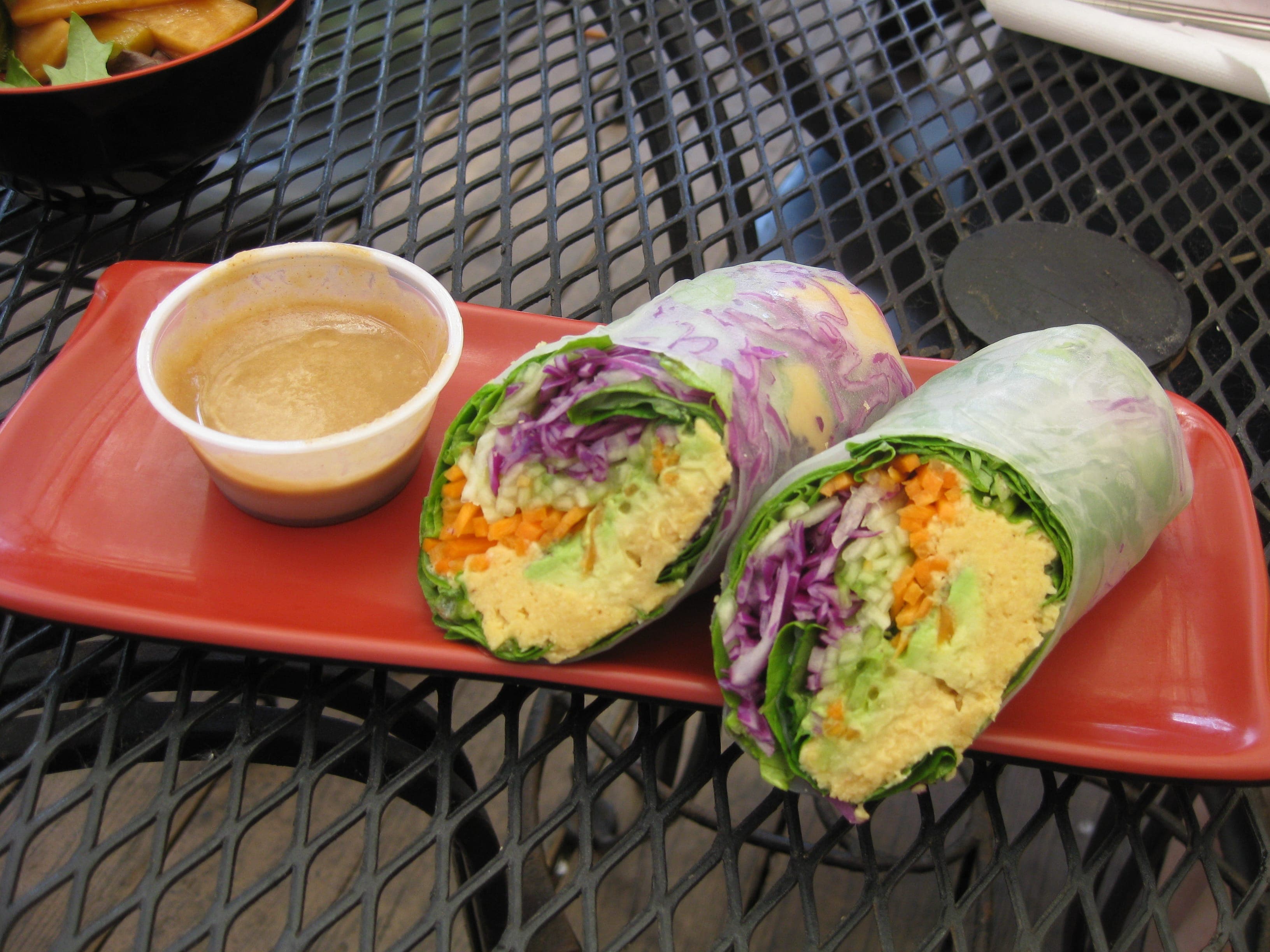 a Summer Roll with Hummus 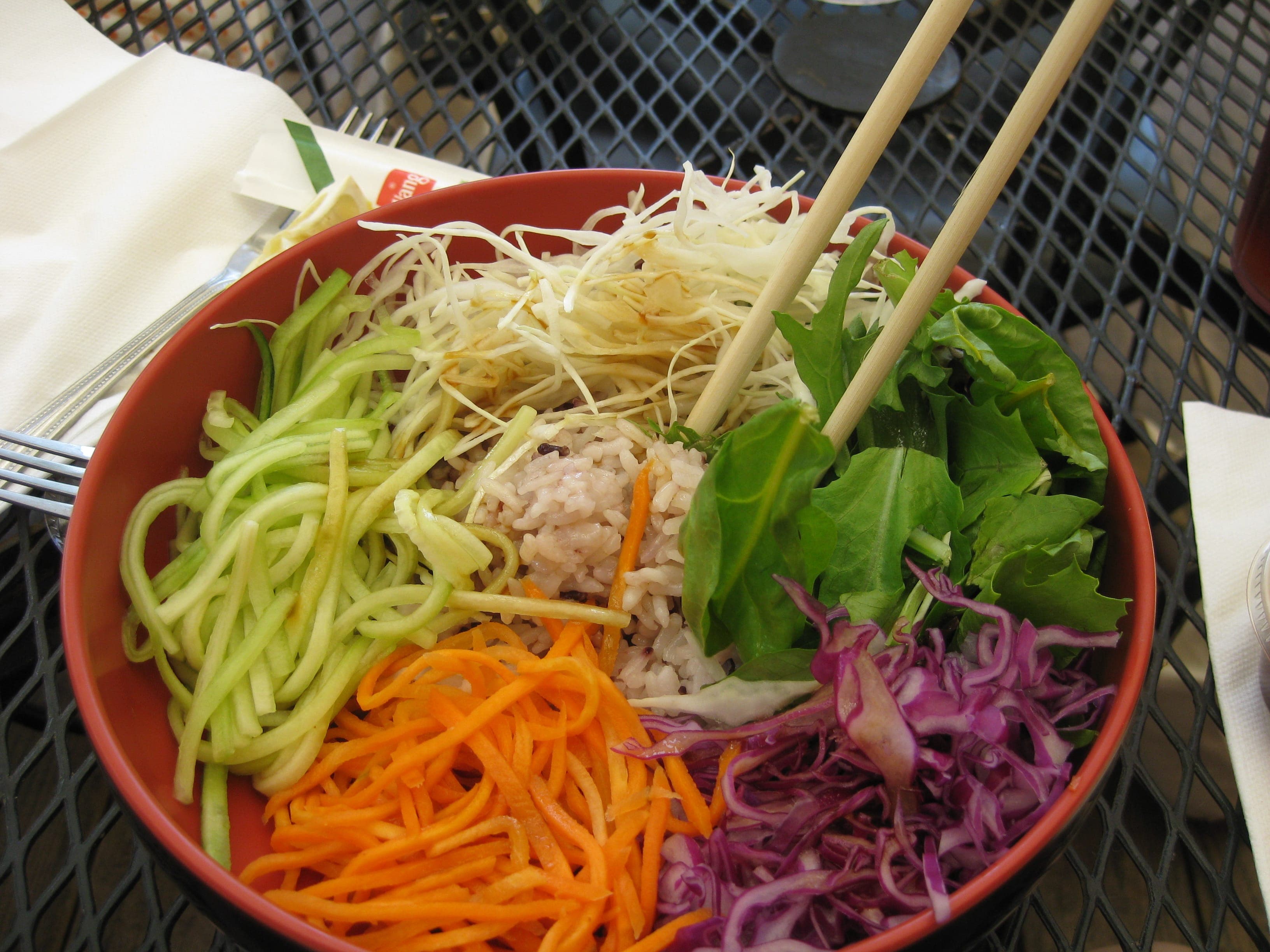 Brown rice and veggies really hit the spot after a few days of rich food, and sitting with these stars of the veg world was a rare treat. This small group of women who live, write and cook to promote a plant-based worldview are usually operating thousands of miles from each other, and it was great to get these moments to share. These are changing times, and we are all seeing the interest in vegan and veg food growing, and that is cause for celebration.

Thanks Austin, and thanks to all my IACP brethren for a good time. I’m inspired and educated, and most importantly, connected to some amazing people.

Oh, and my publisher, Chronicle Books, threw a lively party to announce this years new releases, and I got to see the cover of my upcoming book! 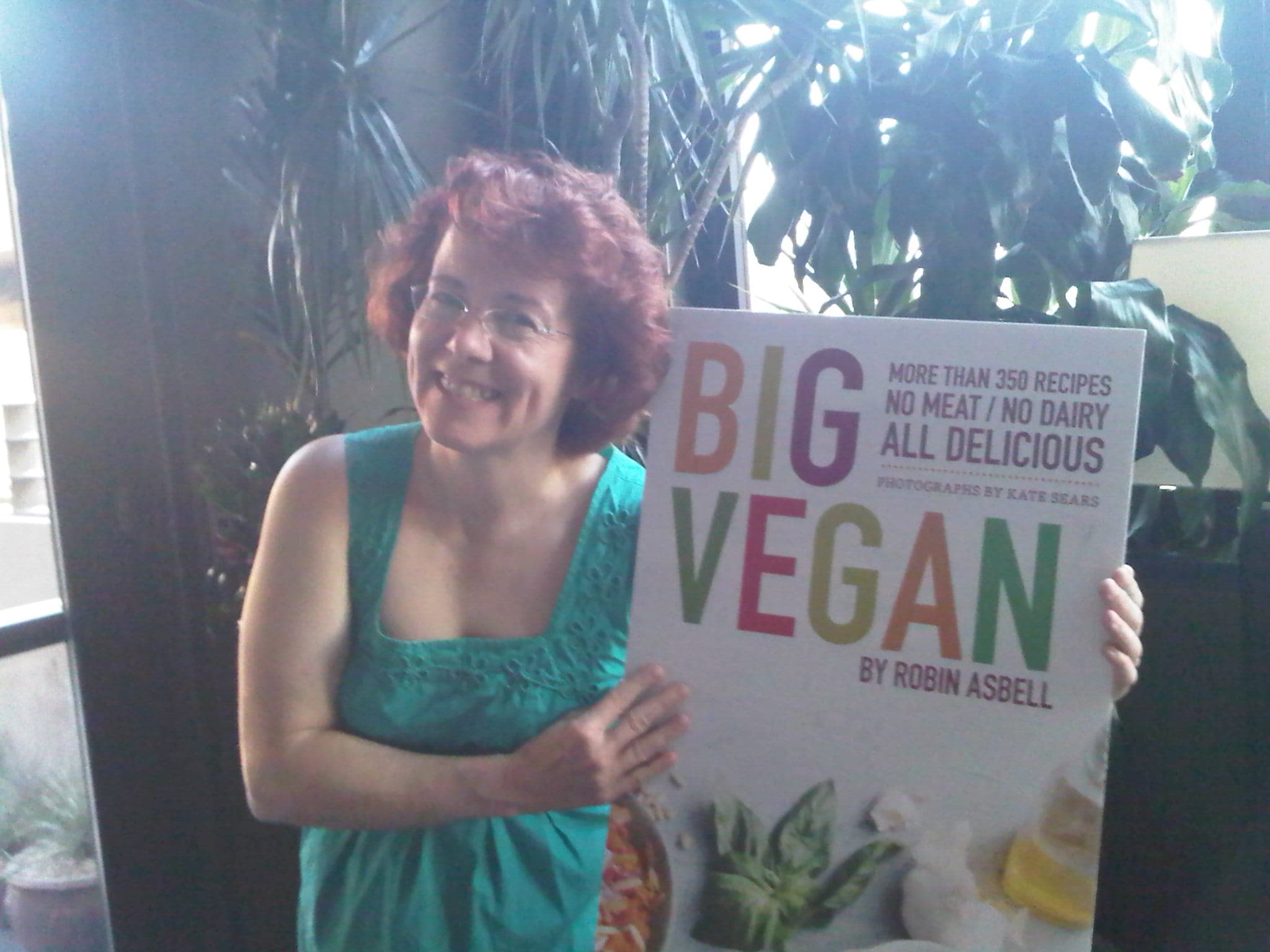