Vegans Take Over the Convention Center 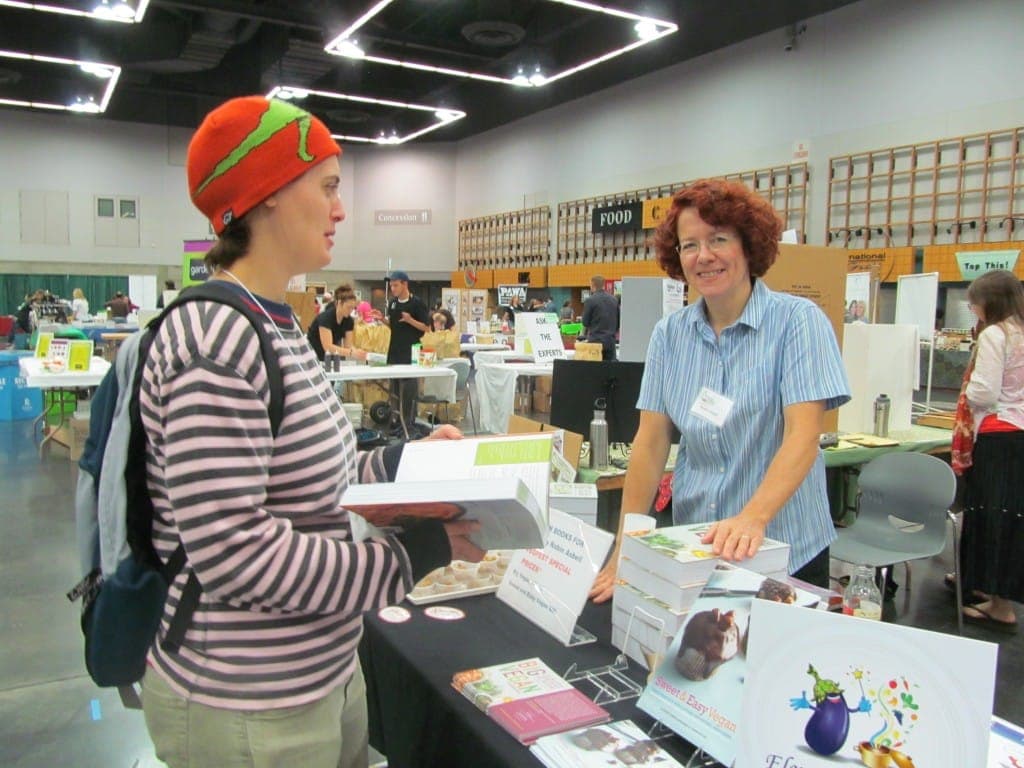 One of my first VegFest visitors peruses Big Vegan

It’s always a winding road, from the beginnings to the official launch of a shiny new book. One day, it’s just an idea, bouncing around like a fluffy cloud in the sky. Then, there’s a magical process that involves lots of shaping, testing, input and help, and then I forget about it for a few months, and then it appears. I have grown to like the surprise of it all. Boom, there it is.

Well, my latest book, Sweet and Easy Vegan, Treats Made with Whole Grains and Alternative Sweeteners (Chronicle Books $35) has landed.

This month I took a trip to introduce my new baby to the many vegan-friendly folks in the Pacific Northwest, with classes in Bend, a book signing at the famed Powell’s Bookstore in Portland, and a weekend at the NW VegFest. Of course, my classes in Bend, at Ginger’s Kitchenware, were a great experience. If you are ever in Bend, you must visit the store.

The VegFest was HUGE! I knew it would be big, but a whole wing of a convention center? Yes, and that was just the booths, with food, books, clothing, and everything vegan, with enough food samples to make a day of it. If bites of chocolate, mock meats and cups of smoothie were not enough, there were also food vendors selling plant based meals, like curry and pad thai.

The main events though, were the speakers. I presented a cooking demo on Sunday, but since I was busy in my booth, selling books, I didn’t get to see the many distinguished speakers. The roster is like a list of who’s who in the vegan community. Caldwell Esselstyn, Milton Mills (watch a youtube of him here), Mark and Virginia Messina, Ruth Heidrich, Robert Cheeke, and many other experts in everything of interest to vegans were there. There were talks about nutrition, athletics, farming, the environment, and of course, cooking.

I shared a booth with my good friend Jill Nussinow, the Veggie Queen, who was selling her books and dvd, as well as speaking on pressure cooking. Jill is a pressure cooking advocate and I wrote about her book in a previous post. She’s also an RD, and shared tips on eating a plant rich diet in minutes. 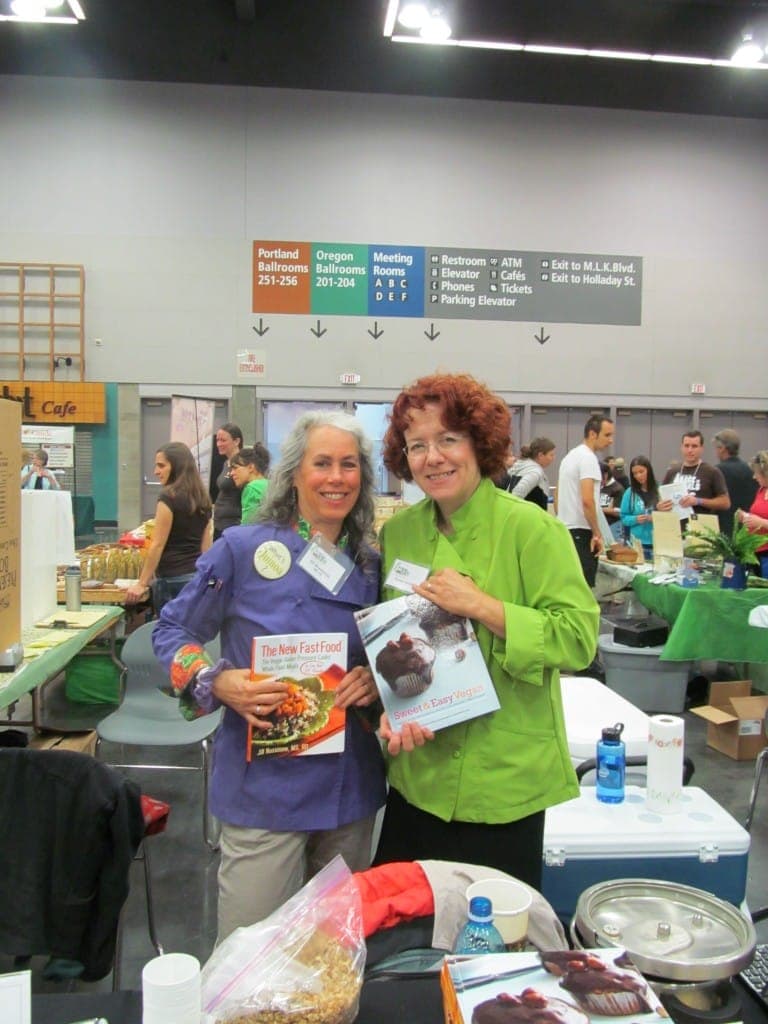 Jill Nussinow and I in a moment of quiet

I was looking forward to spending time with Virginia Messina, the Vegan RD, whom I have admired from afar for many years. She writes a great blog and her new Book Vegan For Life is a well-written and informative guide to the vegan lifestyle. She also has been a leader in working within the American Dietetic Association to educate other dietitians and the public about vegetarian and vegan diets, has worked for Physicians Committee for Responsible Medicine, and written piles of articles and books about the benefits of plant-based eating. I first heard of her when I devoured the book The Vegetarian Way, which she co-authored with her husband, Mark Messina. That book was the basis of many classes I taught on vegetarianism, and I interviewed her husband Mark for several articles over the years. It was a big deal to me when I asked her if I could use her Vegan Diet pyramid in my book, Big Vegan, and she graciously gave me permission.

So, after following her work for all these years, I got to share a booth with her for a few hours, and in between selling books, we got to catch up. 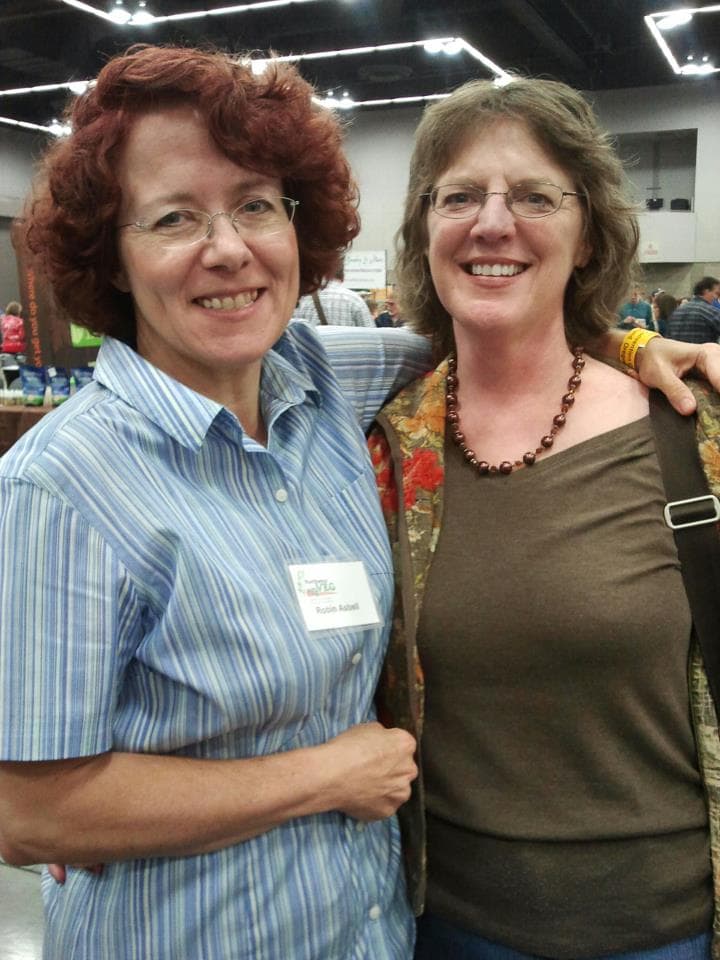 As well as hanging out with Virginia, I was invited to a dinner with the other presenters, and shared Chinese food with Milton Mills and Keith Tucker, who is working on a film documenting the intersection of Hip Hop culture and the Green Movement. It’s going to be a fun and important film, you can check out his the website here. The distinguished group of veg-thinkers and teachers were a fun group, with lots of laughter.

Portland was also a great place to eat Vegan, and I ended up eating at Blossoming Lotus twice, which was a treat both times. It’s a vegan restaurant with many raw food options. One night I had a roasted beet salad with curried cashews and lots of greens, another night I had a vegan cheese platter with fruit and whole grain breads (all handmade nut cheeses) and a Thai Seitan Salad that was spicy and on a bed of leafy greens. Jill and I also made a trek to the New Cascadia Bakery to try the best gluten free baked goods I have ever had. They had some vegan options, too, which were terrific.

So, vegans and anyone interested in eating more plants, look for a VegFest near you. If you live anywhere near Portland, pencil it in for September of next year. These kinds of get-togethers are an essential part of building a sustainable movement. I met many people who were there because they were just starting with a vegan diet, or just curious, and I love hearing that. Attending a gathering with all the resources, and speakers of this caliber, gives these plant-based eaters information that could take years to gather from books and sites.

It’s inspiring, too. I came home energized, and glad to have my small role in bringing plant-based recipes to people who are making great changes in their lives.

From Big Vegan, Over 350 Recipes, No meat No Dairy All Delicious (Chronicle Books)

With the help of kitchen manager Deb Kay (who blogs here) We served 200 samples of this sandwich, which was especially good because we put it on Dave’s Killer Bread, a locally made loaf.

1. Prepare a steamer for the vegetables. When the water is boiling, put the broccoli and kale in the steamer and cover. Cook for 3 minutes, until the vegetables are just tender. Drain and cool, then pat them dry with a towel.

2. In a medium bowl, stir together the tahini, lemon juice, and salt. Add the broccoli and kale and toss to mix. Split the sandwich rolls and toast them, then stuff them with the broccoli mixture and tomatoes. Serve warm or cool.