Chasing Plenty in London, at The Ottolenghi Empire 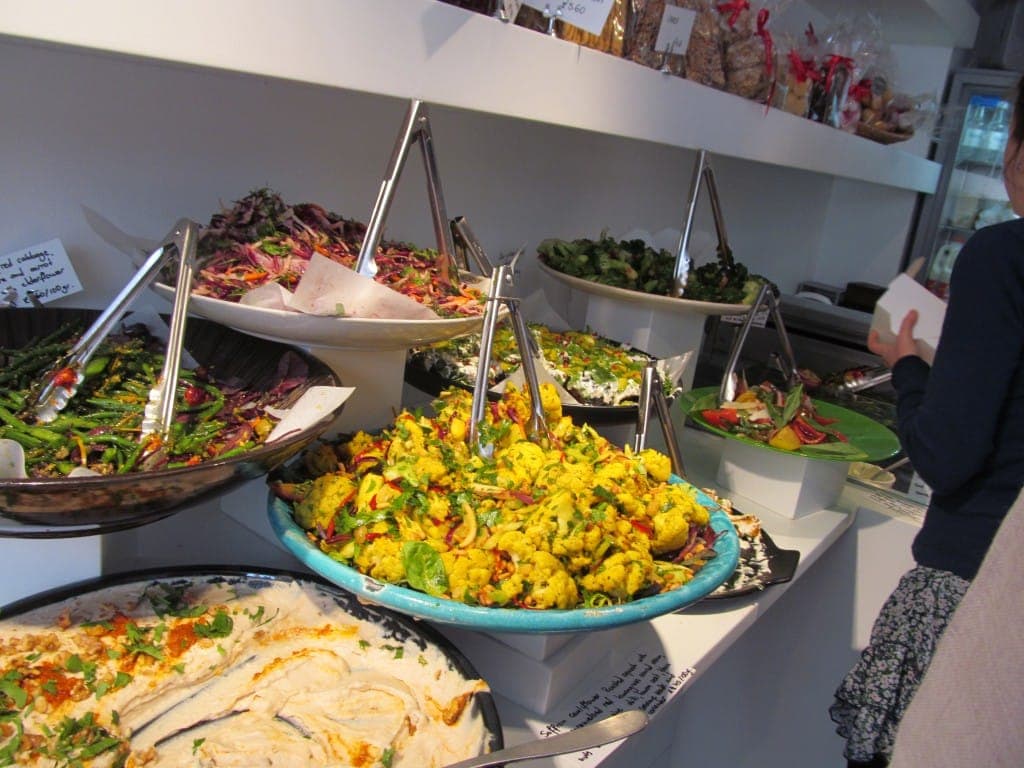 Like many Americans, I was introduced to Yotam Ottolenghi by the rave reviews of his restaurants in London, which were so exciting that American magazines and newspapers splashed brilliantly colored photos of his food across their pages. Then he released his book, Ottolenghi, The Cookbook, coauthored by Sami Tamimi in 2008 , and he was everywhere. It seemed like overnight, his fresh fusion of Middle Eastern, Mediterranean and Global flavors and vegetable centered cooking was the hottest thing going.

Of course, overnight sensations never really happen overnight, like any good band, they work and work and then if a big break comes along, they can be catapulted to fame. That’s really what happened when Ottolenghi catapulted across the pond. Turns out, he had been a featured columnist in the Guardian newspaper, penning a column called The New Vegetarian, since 2006. He also had a growing line up of restaurants to helm, branching out from the original Ottolenghi in Notting Hill, which opened in 2002. In 2010, he released the book Plenty, Vibrant Vegetables Dishes from London’s Ottolenghi, and the follow-up, Jerusalem, also co-authored with Sami Tamimi, came out in 2012.

Hard working guy, yes? Now, I have a copy of Plenty, and have perused his other books as well. Ottolenghi takes the flavors of his native Israel, as well as the world, and amps them up to make vegetable dishes that are intense and vibrant. Pomegranate, saffron, and tahini might grace a recipe and on the next page, basil, oregano and chiles carry the day. Ottolenghi also manipulates his cooking methods to coax exciting flavors and textures from veggies, like a Broiled Vegetable Soup, or the recipe below, in which cauliflower is oven-braised in saffron-infused water, building complexity and intensity.

So it was with great excitement that I made plans to make a pilgrimage to his flagship restaurant in Notting Hill. I wanted to see where it all started, and try it all first hand. 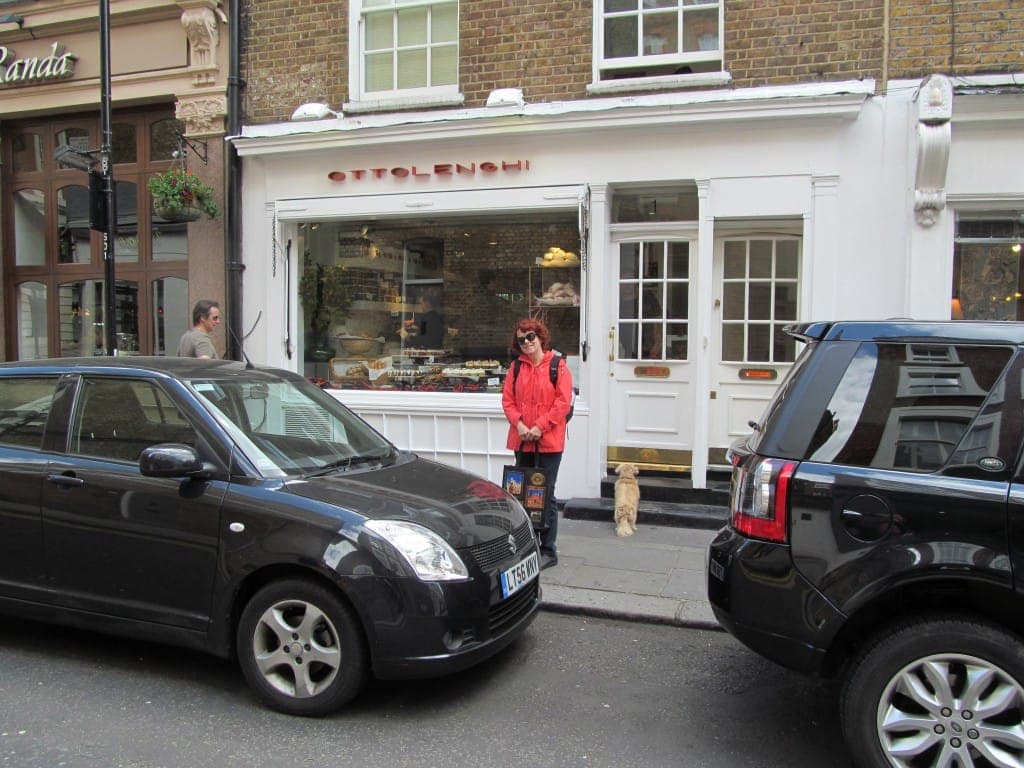 Me, outside Ottolenghi, with a Dog Waiting for His Owner

The first thing I realized at Ottolenghi was that this was a teeny, tiny place. Take-away only, as the Brits say, and honestly, that photo at the top is about a third of what’s on offer. It’s also very dessert and baked good focused, and all of that looked amazing. 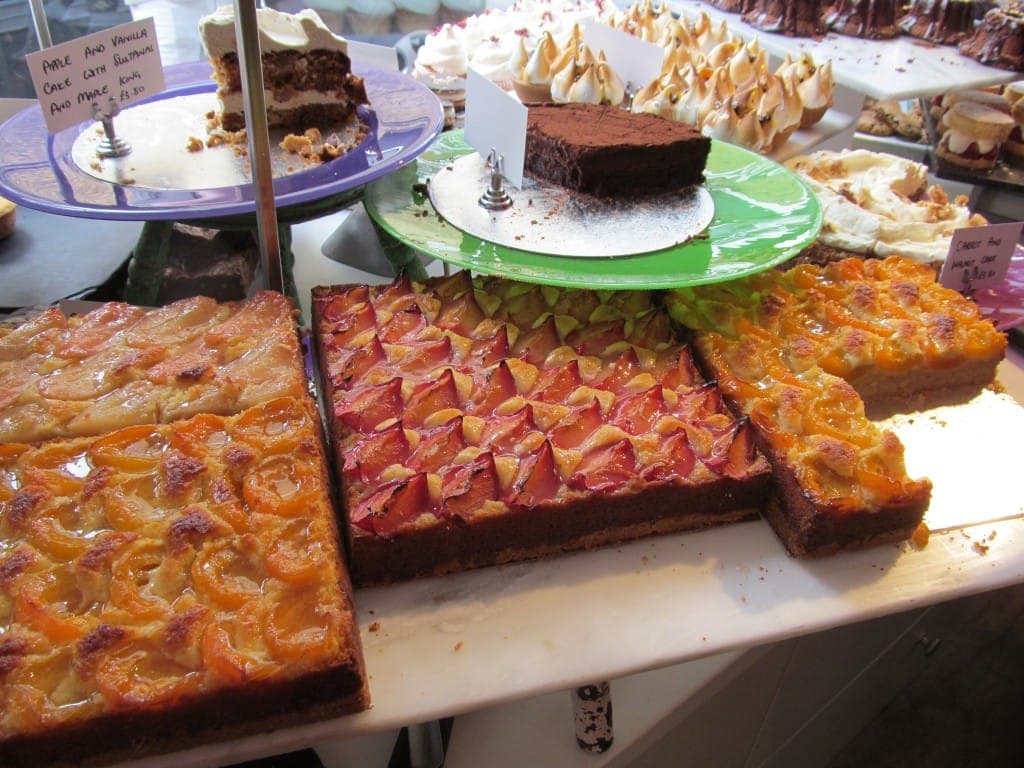 The Whole Front Window is Full of Treats Like These

The Next thing to know is that Ottolenghi LOVES dairy products, especially yoghurt. I knew it was not a vegetarian place, but after hearing about the growing interest in Vegan food in London, I expected a few more plant based dishes. I went ahead and got a bit of all the vegetarian dishes to try, and they were all delicious.

I also bought a jar of his Salad Seeds (sliced almonds, pumpkinseeds and sesame seeds) and Dukkah (Hazelnuts, sesame seeds and spices ground up for dipping bread) to bring home. I was feeling touristy, what can I say?

Of course, when you travel hundreds of miles to get to a restaurant, it’s easy to expect too much. This little deli is like the seed that grew a forest, really. I could almost imagine how the trendy neighborhood of Notting Hill had embraced the little take-out place, and buoyed the talented chefs to now Worldwide fame. It’s good food, really good food.

So, with that perspective,  we took a trek the next night to his fine dining restaurant, NOPI. There, similar bowls of salad and veggies greeted us in the foyer, where they like to have them on display as they serve them at room temperature, just like the deli. 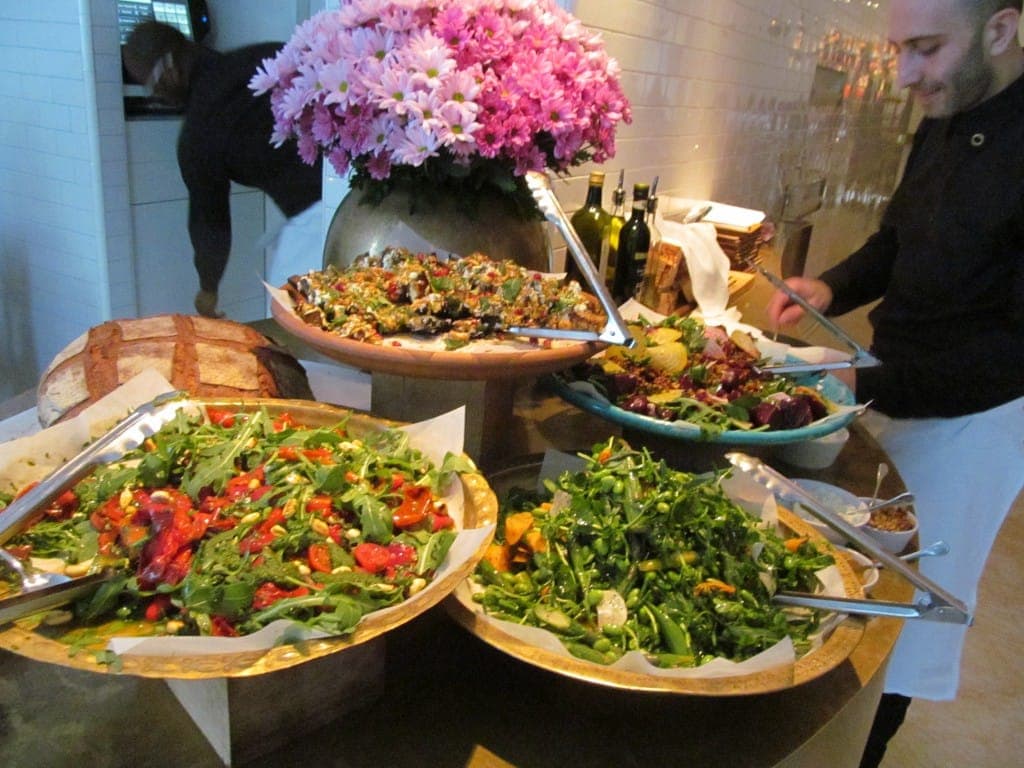 Veggies on Display at NOPI

The menu was exciting, with many interestingly spiced and flavored dishes. There was one vegetarian entree, a chickpea pasty, and an assortment of vegetable dishes. I made a meal of three of the vegetable sides, which as it turned out, would have been plenty, but our waiter made a mistake, and to make it up to us, brought two more vegetable dishes. There were zucchini fritters, pickled beetroot over a rich baked goat cheese pie, chickpea polenta fries, and the chickpea pasty, all delicious. We tried gamely to eat all the food, which is very rich and intense, and just could not. I cannot blame anyone for my own gluttony, I know.

Then the waiter offered a dessert menu, and we declined. “Next time you should save room, our desserts are the best thing we have here,” he said.

The Saffron Cauliflower from Plenty

This recipe makes a lovely golden bowl of cauliflower, that, as far as I can tell, is the same as the one he serves at his Notting Hill restaurant, or pretty close. The technique of oven-braising the cauliflower with saffron really infuses the dish with flavor, and I love to put everything in one pan and bake it.

Serves 4 as a Side Dish

Preheat the oven to 400 F. Put the saffron strands in a small cup and pour over the boiling water. Leave to infuse for a minute, then pour the saffron and water into a large bowl. Add the remaining ingredients, except the parsley, and mix well with your hands.

Transfer to a medium baking pan and cover with foil, then roast for 40-45 minutes, stirring halfway, until the cauliflower is tender but not overly soft.

Uncover the pan and let cool, then stir in the parsley. Taste, adjust salt and pepper, and serve warm or at room temperature.