The Beauty of Grilled Cauliflower 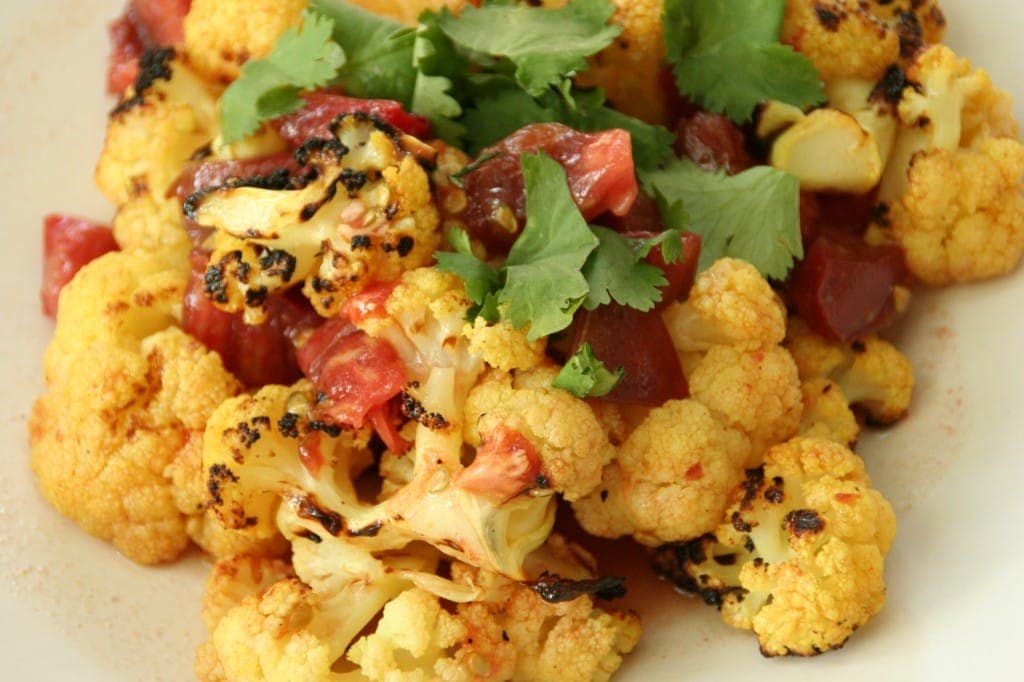 One of the great things about cooking is that you can follow your muse, becoming slightly obsessed with certain foods or flavors, then moving on when another one catches your fancy. The wide world of plant foods offers up a bounty of inspiration, with each seasonal shift. Thanks, Mother Nature.

So I can admit that somewhere along the line I kind of stopped being that into cauliflower. I still put it in recipes, but when I was fantasizing about cooking a healthy meal, my mind went to greener, brighter veggies.

It was my loss when I fell out of sync with cauliflower, which is a brassica in good standing, and confers all the anti-cancer, anti-oxidant goodness of its family tree. It’s especially talented in the detox department, containing sulfur and glucosinalate compounds that help your system detox itself. It’s rich in Vitamin C, as well as vitamin K, a potent anti-inflammatory.

I’d like to offer thanks for a recent reminder that cauliflower deserves a celebration. The local Farmer’s Market has recently offered up piles of jumbo cauliflower, just in time for the grill. I’ve been ramping up a new appreciation of cauliflower, especially pan-roasted to make a caramelized edge and tender center, and the grill is a great place to do more magic with the white veggie. It’s too easy to get in a rut with our grill veggies, sticking to corn on the cob and soft veggies like zucchini, but there’s a whole world of veggies that just need a little more TLC to really shine with a hint of char.

The key to getting great results with cauliflower on the grill is a quick blanch before hand. The texture of cauliflower is a bit dryer and more fibrous than a zucchini, so it does need some boiling water to infuse and soften it before it goes over the flame. So, it takes another step, but it’s a great opportunity to do some fun stuff with color.

So, since I was going to drop the cauliflower into boiling water for a couple of minutes, I thought, why not put some turmeric in the water to give the cauliflower a little natural dye job, then marinate it in a curry infused oil before grilling, for even more color and flavor. The results are pure gold.

Then, the tinted veggies got a quick grilling over medium heat, and since they were already partially cooked, they just needed time to get tasty char marks and absorb a little smoke. Then I tossed them with a sweet and sour dressing, to counter that bit of bitterness, and some heirloom tomatoes and cilantro.

And, as long as I was at it, I cut out some cauliflower steaks and grilled them to serve the next day. The steaks, which make a stunning centerpiece on the plate, were terrific heated up and drizzled with a bright green cilantro chutney. Yum.

First, cut the “steaks.” Trim the stem of the cauliflower even with the base, then turn it over and slice it in half through the stem, then cut an inch thick, solid piece on either side. Reserve. Cut the remaining cauliflower into big pieces, aiming to have flat edges wherever possible, to place on the grill.

Boil 3 quarts of water in a 4 quart pot, and add the turmeric and salt. Gently place the steaks in and simmer for 3 minutes, then carefully place on a towel. Drop the cauliflower florets in the still boiling water and cook for two minutes, also. Drain, and be sure to clean the sink right away, it will stain it yellow!

In a flat bottomed storage container, whisk the canola oil and curry powder with veggie stock. Rub some on the steaks, and then toss the remaining cauliflower with the remaining. Let marinate for a few hours or grill right away. To grill, heat the grill and oil the grate, and sear the steaks and chunks of cauliflower over indirect heat. It should be hot enough to make marks but not dry out from being on too long. Transfer the florets to a bowl and the steaks to a plate or storage container.

Save the steaks, or serve them drizzled with a green chutney and on top of some red rice.

For the salad, whisk the lemon, agave, salt and ginger, and pour over the cauliflower. Add the tomatoes and toss, serve topped with peanuts or cashews.