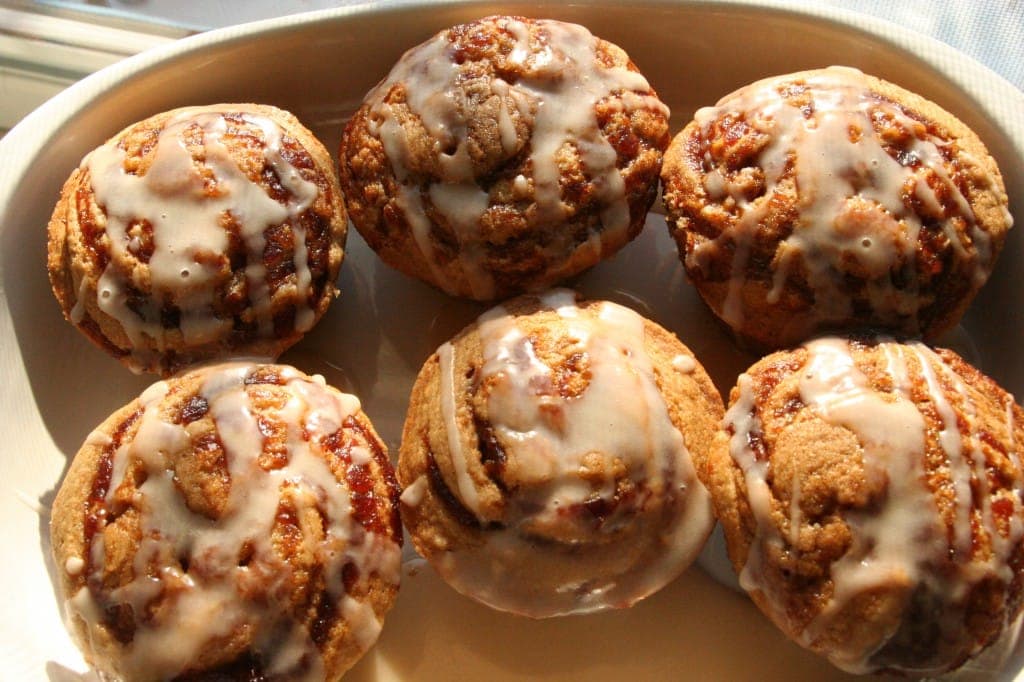 I love apples. All year long. But this time of year, I’ve just got a thing for apples and spice. Something about the smells of cinnamon and the tangy sweetness of the apple just warms me from the inside out. So when I saw a photo online of a cake with a swirl of apple butter in it, I practically laid awake nights thinking about it.

Yes, I really do lie in bed and think about food when I should probably be sleeping. But it is my job, so maybe that makes it less weird, right?

So on this frigid, snowy day, I decided to bake up some mini-versions of that cake. I picked up some fruit sweetened apple butter, which I love. I’ll probably eat the whole jar before the Holidays even get here. I picked maple syrup as my sweetener for the cupcake, and used canola oil, although if you wanted an even richer mouthfeel, you could go with coconut oil, too. I put a little unbleached flour in, for tender quality that I need in a cupcake. Casting about for a frosting, I pulled out my jug of apple cider, and decided to go with a drizzle of cider and powdered sugar glaze, that would not obscure the apple butter swirls, while still dressing it up just a bit.

It’s really easy, just a stir it up in a bowl cake, with a stir and drizzle glaze. The only tedious part is swirling in the apple butter. But we’ll get to that.

Once the cider was out, it struck me that a lively, gingery mulled cider and wine would be a perfect antidote to the day. So, I set to warming that on the stove, too. Let’s say I was feeling festive.

To get the apple butter swirls all the way through the cake, I opted to put in half the batter, swirl in a teaspoon of apple butter, and then repeat, giving them a two level apple butter delivery system. Of course, you could just do it once, but I think this is worth the extra minute.

Into the oven for a quick 20 minutes, and my lovely cupcakes were done, their enticing spirals of apple goodness beaming up at me.

Just as the glaze was setting up, my doorbell rang, and I opened it to see my friendly mailman. He was bundled head to toe, his face barely visible in the tunnel of his hood. He beamed. I was sure that apple and spice scents must be pouring out the front door. He handed me my package and my mail.

“Wait here, just a second,” I said. “Let me get you a couple of cupcakes.” I scurried back to zip them in a baggie.

He beamed, tucking them gently on the top of the cargo in his bag. “Thank you.”

“It’s really supposed to be cold tomorrow.” He said.

This is a classic Minnesota exchange, usually had while shivering on a stoop, wearing a parka. It’s always going to get colder at a later date, making today’s sub-zero windchill not so bad.

“Have a great weekend!” I said. I thought about the cider, but, no, I did not give the mailman alcohol on the job. I don’t know the rules on that, but I suspect it’s frowned upon.

I hope my cupcakes made his day just a little apple-ier. 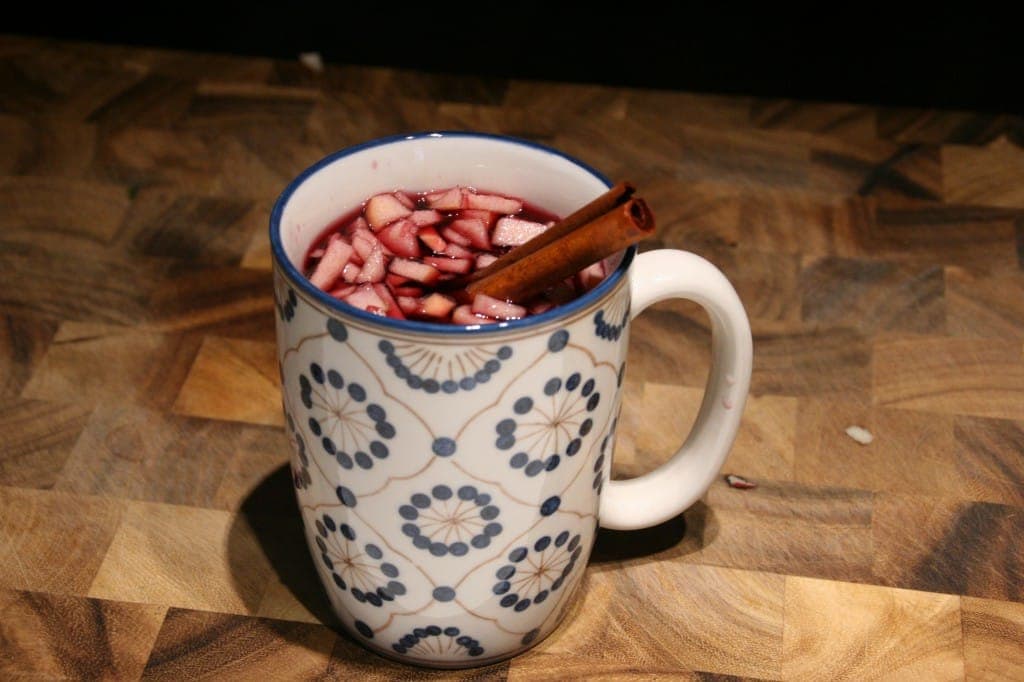 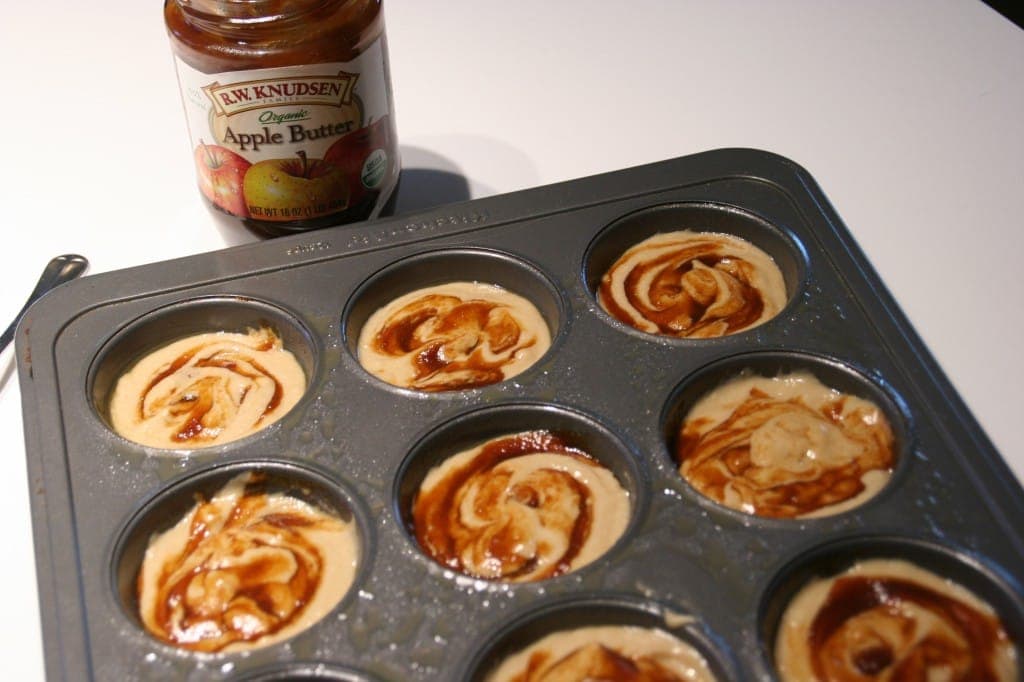 24 teaspoons apple butter (about half a cup)

3. In another medium bowl, stir the maple, milk and vinegar. Stir in the oil.

5. Bake for about 20 minutes, until a toothpick inserted in the center of a cupcake comes out with no wet batter clinging to it. Cool on racks for five before carefully transferring the cakes to the rack to cool completely.

6. For glaze, put the powdered sugar in a bowl or cup and stir in the cider with a fork. Use the fork to drizzle on the cupcakes. Let the glaze dry before storing or serving. If you can wait!

Mulled Cider and Wine with Honeycrisps

I kept this simple, because , really who wants to keep all the spices for mulled cider on hand? A cinnamon stick and a large dose of warming ginger is enough spice for me, but if you want to throw in a few whole cloves and allspice berries, feel free.

Put the cider, wine, cinnamon and ginger in a 4 quart pot and warm on the stove. Don’t boil, just let the spices scent the air and marry with the cider and wine. Strain out the solids and add the chopped apple to the warm cider, serve with a spoon to eat the apples at the end.