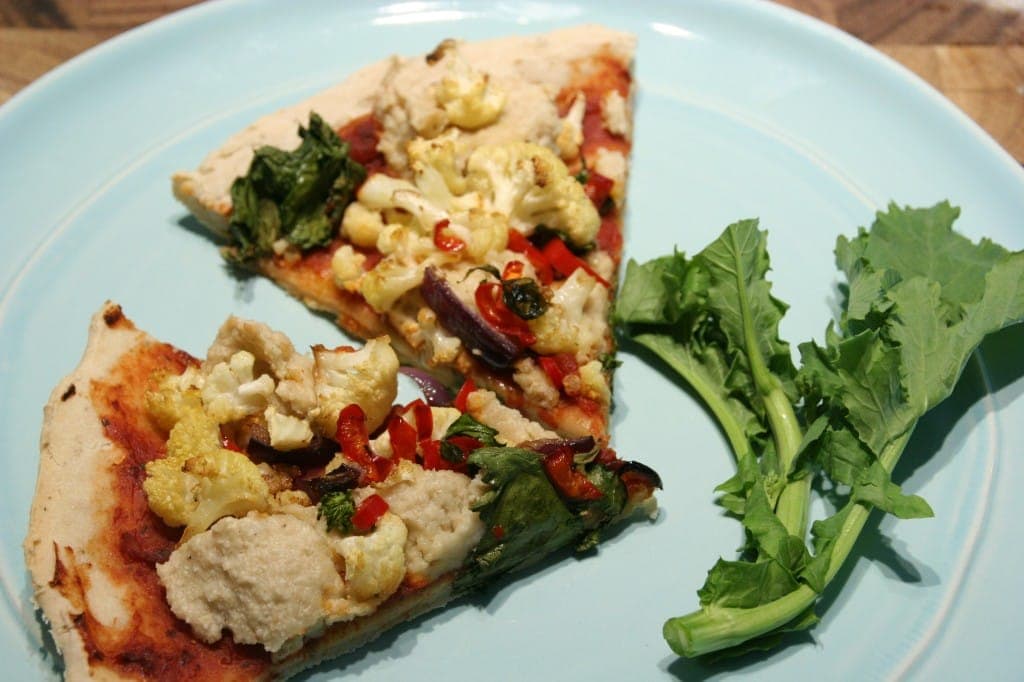 If you have shopped for gluten-free cookbooks in the last 19 years, you have to know the books of our Grande Dame, Carol Fenster. She’s the author of 11 gluten-free cookbooks, and has been providing a treasure trove of recipes and information at her blog, CarolFensterCooks.com for many years. In the world of gluten -free, Carol is an internationally known expert, who speaks and consults all over the world. You can even subscribe to her meal plans at gfree.com, and for a small fee, receive plans and recipes designed to make GF easy for you.

I’ve known Carol for several years, and like many people, when I am stumped about something gluten-free, I turn to her. We first met at a Whole Grains Council conference, where we bonded immediately over our shared passion to get more whole grains into gluten-free recipes. I’ve had the opportunity to take a class from her, and to interview her for articles I was writing, and she  is a great resource and inspiration.

Gluten-Free 101 is an update of an earlier book, and the fact that it is needed speaks to a big change in the gluten-free landscape. It’s an excellent book for beginners and experienced cooks alike. Carol has developed her yeasted recipes to offer the option of putting them in a cold oven, to use the preheat time as rising time, which is a really clever innovation. There are lots of contemporary flavors and new flour that weren’t there when the first book came out.

I asked Carol about the way things have evolved in the world of gluten-free.

When was your first book published?

I was told to avoid wheat in 1988, but didn’t publish my first book (self-published, because gluten-free wasn’t BIG then) in 1995 and then just kept writing books because I discovered that I wasn’t alone (as I previously thought). The idea for Gluten-Free 101 came about when I realized a few years into authoring that I was missing a group of people who didn’t have the cooking background to understand even the simple basics. Consequently, they were completely overwhelmed by the thought of cooking. One colleague avoided breakfast for 3 months because she was afraid to eat or prepare the wrong thing and then possibly get sick at work (she was a courtroom attorney). I self-published the original book in 2003 and just recently revised/expanded it for Houghton Mifflin Harcourt (formerly Wiley) for publication in 2014.

How has the gluten free landscape changed, especially with respect to getting more whole foods into the recipes?

Interest in gluten-free has skyrocketed and we see a broader range of races and ethnic groups (we once thought it was primarily a Caucasian-only condition). I just spoke at a large gluten-free conference this past weekend and was amazed at the cultural diversity of attendees. As for the whole foods, we have a ways to go. There is greater interest in whole grains, for example, yet we still have a lot of highly-processed foods such as crackers and cookies being manufactured for the gluten-free community that are not all that healthy, although they’re certainly safe for the gluten-free diet.

How have the people who are going GF changed? Are they doing it for different reasons?

It used to be that the gluten-free diet was a “medically-prescribed treatment,” primarily for celiacs only. Today, we see it used for children with autism, people with auto-immune disorders, those with non-celiac gluten-sensitivity (which affects 6 or 7% of the population, far more than the 1% for celiacs), and finally (and unfortunately) people who adopt a gluten-free diet as a weight-loss approach. As any expert will tell you, a gluten-free diet is NOT a weight-loss diet. In fact, it can add pounds instead. And, it implies that once you’ve lost the weight, you can return to eating gluten…which just confuses everyone including waiters in restaurants! In reality, a gluten-free diet for most of us is a lifelong commitment because it is the only treatment for celiac disease and non-celiac gluten sensitivity.

Do you know of any new products, grains, flours, etc, coming down the pike?

Someone just sent me a bag of flour made from grape skins, so I’m eager to give that a try. I don’t know anything about this flour but it’s fun to experiment with new flours. And, of course, I’ve been using kaniwa (baby quinoa) and I especially like the red and black forms of quinoa because they taste better to me. I’m especially impressed with the new dairy-free cheeses from Daiya. Vegan Gourmet does a great job with its dairy-free sour cream and cream cheese. It’s easy to forget that, along with being gluten-free, many people have other food sensitivities such as lactose-intolerance so it’s good to have these new substitutes to work with.

So, here we have a little taste of Carol’s latest book, and her recipe for Veggie Pizza.

It was really delicious! 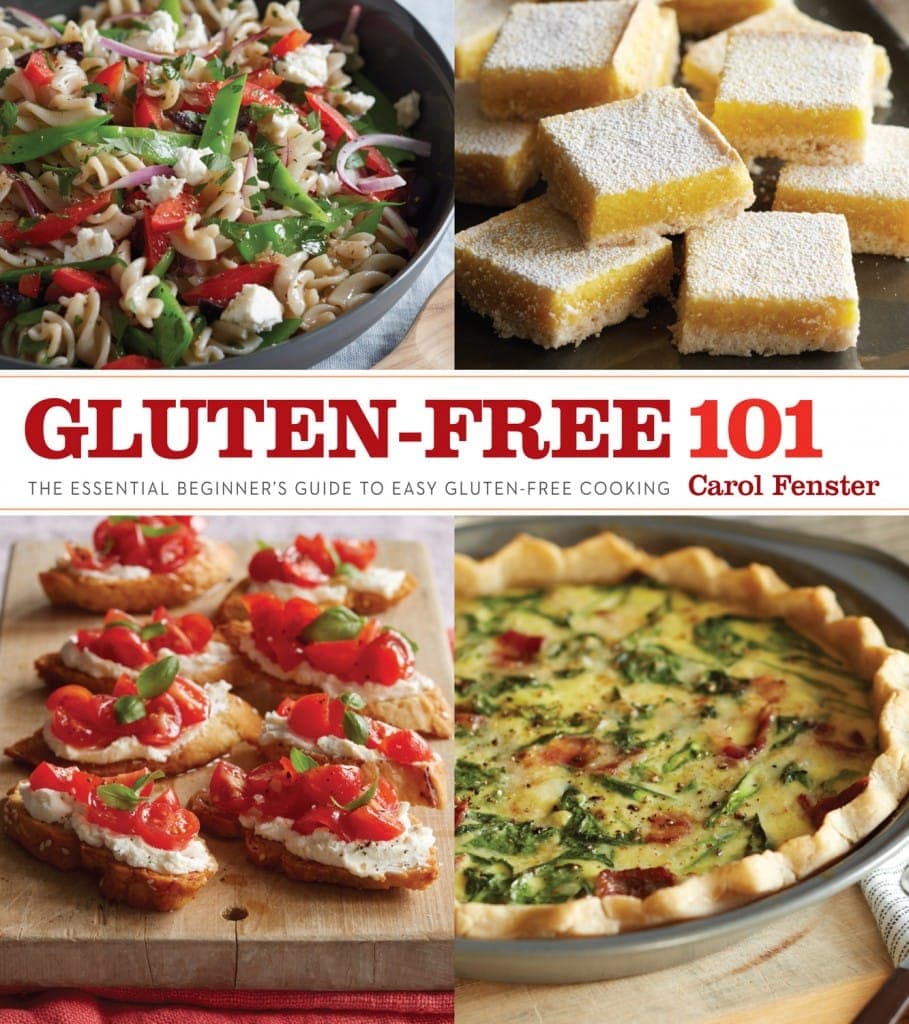 To make this recipe vegan-friendly, I made some cashew cheese to dollop on top. I used cauliflower, red onions, a red Fresno Chile and some broccoli raab for the veggies.

Pizza is one of the top foods people miss when they go gluten-free. I’ve been refining this pizza crust process for years, and now the result is so good that it has received national acclaim. You can hold it in your hand and it won’t crumble! Gluten-free pizza dough is very soft and sticky—without the elasticity of wheat flour dough—so it is patted into the pan rather than rolled or stretched. The dough adheres to the pan better when it is greased with shortening rather than cooking spray. You can use store-bought pizza sauce, but try mine— it is thicker so it won’t make the crust soggy. You can make it up to 1 week ahead. I used bell peppers, tomatoes, onion, and olives to top this veggie pizza, but you can use any toppings you like, including pepperoni, sausage, ham, or bacon.

1 tablespoon olive oil (for cooking vegetables), plus more for brushing the crust (optional)

2 cups vegetables, such as the following:

[1] Make the pizza sauce: In a small heavy saucepan, combine all of the sauce ingredients and simmer, uncovered and stirring occasionally, for 15 minutes. Set aside.

[2] Make the crust: Arrange oven racks in the bottom and middle positions of the oven. Preheat the oven to 400ºF. Grease (use shortening or butter, not oil or cooking spray) a 12-inch nonstick (gray, not black) pizza pan. Dissolve the yeast and sugar in the warm milk for 5 minutes.

[3] In a food processor, blend all of the crust ingredients, including the yeast mixture, until the dough forms a ball. The dough will be very, very soft. (Or, blend in a medium bowl, using an electric mixer on low speed, until well blended.) Put the dough in the center of the pizza pan. Liberally sprinkle rice flour onto the dough; then press the dough into the pan with your hands, continuing to dust the dough with flour to prevent it from sticking to your hands. At first, it will seem as though there is not enough dough to cover the pan, but don’t worry―it is just the right amount. Make the edges thicker to contain the toppings, taking care to make the dough as smooth as possible. The smoother you can shape the dough, especially around the edges, the prettier the crust will be. Bake the pizza crust for 10 minutes on the bottom rack.

[4] While the crust bakes, make the toppings. Heat the oil in a large skillet over medium heat. Add the vegetables and cook, stirring frequently, until slightly softened, 3 to 5 minutes.

How to Shape Pizza Crust Dough

See a step-by-step guide to making gluten-free pizza at www.glutenfree101.com. Click on Videos, then on Pizza 101.

Wouldn’t it be nice to have a pizzeria in your own kitchen? Well, that may be asking a bit much. But you can have pizza often and with little effort, with a little advance preparation. Make the pizza dough ahead of time and freeze it, tightly covered, for up to 1 month. Thaw the dough overnight, tightly covered, in the refrigerator before shaping the dough on the pizza pan following Step 2. Or, make the dough on weekends, refrigerate, tightly covered, and bake it up to 3 days later. The only change required for make-ahead dough is to use cold rather than warm milk so that the yeast won’t activate until the pizza goes into the oven. While the chilled dough is easier to shape, it may take longer to rise because it is cold, so let the shaped crust sit on the countertop for 10 minutes to warm up a bit before baking.

When you’re ready to bake the pizza, preheat the oven, remove the foil from the crust, and place it on a lightly greased 12-inch pizza pan. Let the crust thaw for about 10 minutes while you prepare the toppings. Add the toppings and bake the pizza on the middle rack just until the cheese is melted and lightly browned, 15 to 20 minutes (depending on toppings). Serve imme