Why Aren’t You Eating Yucca? 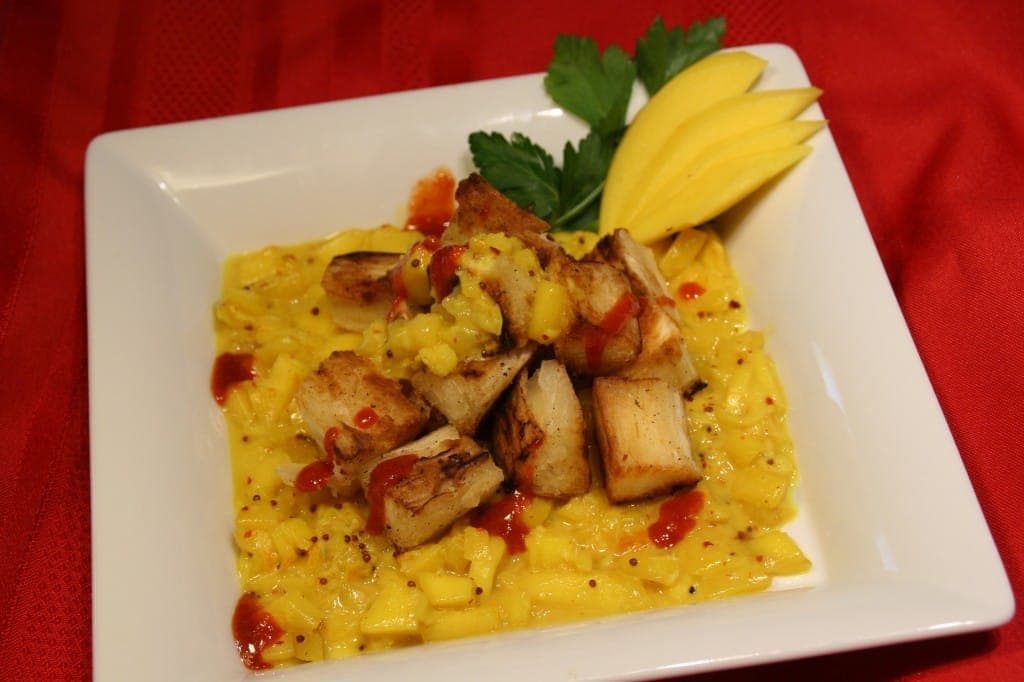 I recently found myself in first a Cuban joint, Victor’s 1959 Cafe, and then a few weeks later, an El Salvadoran place called Pupuseria La Palmera. When I perused the menus, I realized something about myself. Whenever I see yucca on a menu, I order it. Yucca with salsa, yucca in garlic butter, yucca with salsa verde, I just can’t see it and not want it.

And I always think, why don’t I make this more often?

I had yucca, (also known as cassava)  for the first time, about 20 years ago, in a now-defunct Cuban place called Cafe Havana. I had been invited by the chef, a lovely woman that I had met in my neighborhood organizing work. She was so proud to show me the menu. Of  course, there was not a vegetarian entree in sight. But, there were fried plantains and yucca. I bit into the crispy fried chunks of creamy white root, and fell in love. It was good that I was so smitten, because when my friend came to the table, her face fell. She was hurt that we were not having pork.

I was madly in love with my appetizer, and just kept telling her how much I loved it. She was mystified.

I went through a phase of obsession with yucca after that. I sought out the massive brown tubers and boiled them. I made them into potato salad, I pureed them in soup. Like all culinary crushes, it passed, but to this day, the thought of a plate of crispy yucca gets me going.

If you aren’t up on yucca, it’s a starchy root vegetable, common to the Tropics. Fried yucca is the French Fry of Latin America. Like the French with their Aioli, they serve it with much more interesting sauces than our ketchup. It’s also big in parts of Africa, Southern China, Southern India, Thailand and Vietnam. In many of those places it’s used to make flour, breads, dried chips to fry, or starch.

But if you dig a little deeper (It’s a root, get it?) yucca turns out to be very different from a potato. For instance, the yucca is twice as high in calories and fat than a potato, ounce for ounce. It has the same vitamin C content, and a few trace minerals here and there. It’s so much richer and, dare I say, meatier than a potato.

But where it gets interesting are the saponins. Saponins are natural soaplike chemicals in yucca, which you may have heard about because they are similar to the coating on quinoa that we are all supposed to rinse off. The ones in yucca act as natural steroids, soothing joint inflammation like a very weak, natural cortisone shot. It’s also got polyphenols and some antioxidants. These chemicals are thought to be the source of yucca’s long-standing reputation as an arthritis cure. It’s anti-inflammatory, and helps with joint pain.

You can buy yucca pills to treat arthritis, but why not enjoy the awesomeness of yucca as food?

This got me thinking, why not make a dish with a base of yucca and a sauce packed with even more anti-inflammatory foods? It would be like eating the best French fries, ever, with the pleasant side effect of making the day that follows my morning spin class pain-free.

So, here you go, my decadent-tasting pain-relieving special, here at the home for creaky joints. 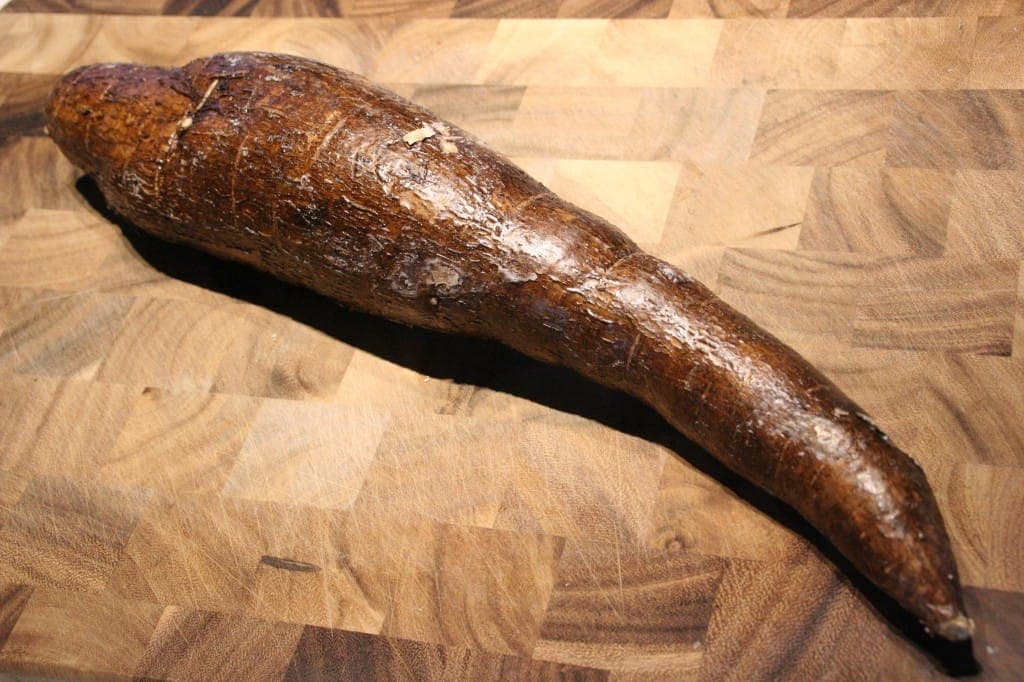 Yucca, the delicious but gnarly looking relief your knees need 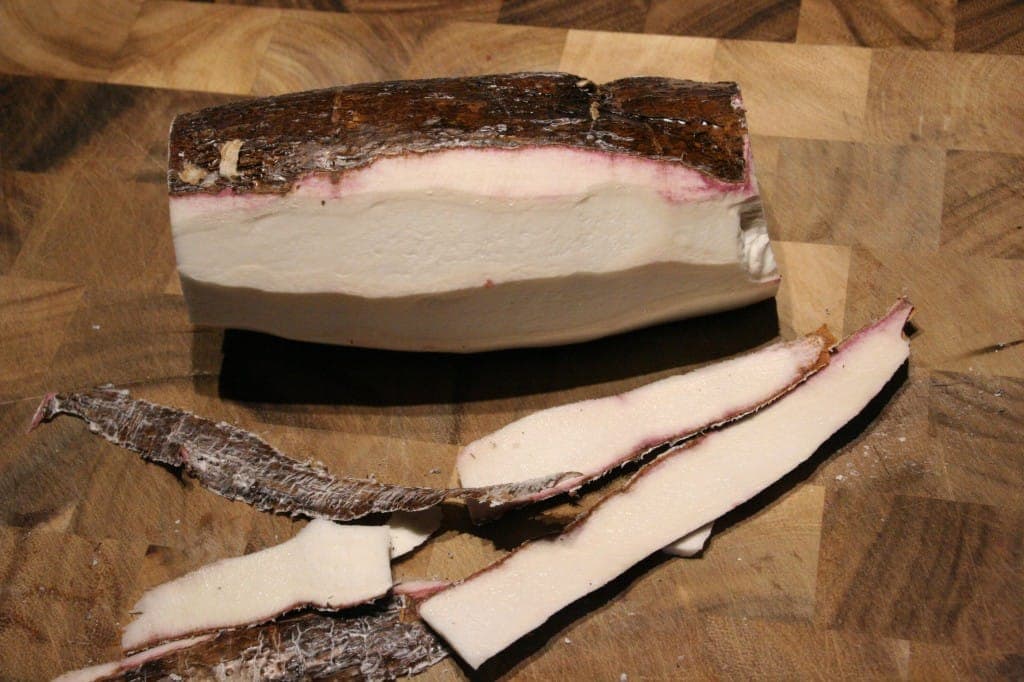 Of course, you don’t have to fry the yucca. Once it’s boiled and chunked, you can even just heat it in the sauce and serve it like a curry.

Fill a large bowl halfway with cold water. Use a paring knife to peel the yucca, then slice it in half lengthwise. Pare out the hard core that runs down the middle, like a slightly twisty, thin root. Put the yucca in cold water to soak and to prevent browning.
Bring a big pot of water to a boil and add the drained yucca. Add salt. Bring to a boil and lower to a vigorous simmer. It may take 20 minutes, it may take an hour. Check by piercing with a paring knife, it should be very tender, but not falling apart.
Drain and let cool. Cut in chunks.
Make the sauce. In alarge saute pan, heat the coconut milk. Add the mustard seeds, ginger, turmeric and pepper flakes and bring to a boil. Add the mango, sucanat, lime and salt and simmer until the fruit is slightly softened and the sauce is thick, about five minutes.
To serve, heat canola oil in a large saute pan over medium high heat. When hot, fry the yucca chunks, turning them individually with a fork or spatula, til all the sides are browned. Drain briefly on paper towels, sprinkle with salt, and serve with sauce on or beside the yucca. Drizzle with hot sauce, if desired.