What Kind of Sushi Does the Fox Make? 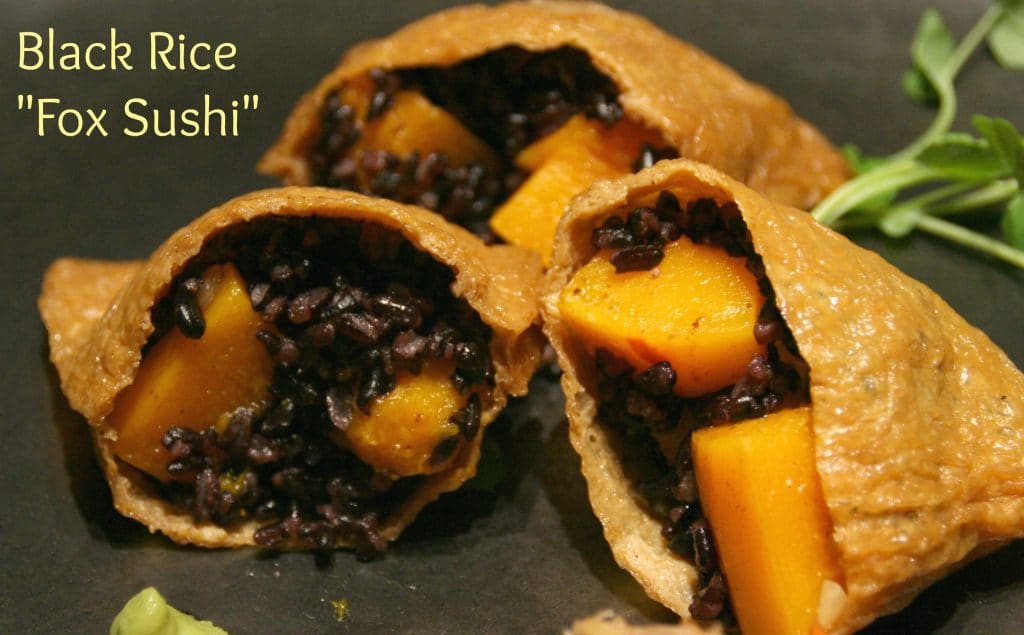 Have you ever seen “Fox Sushi” on a menu? Did you wonder what kind of sushi a fox might make?

There are two reasons for the name. One is an old belief that fox spirits are roaming about in Japan, where their mischievous, sensual behavior is to blame for unexpected events. Like troublemaking fairies, these spirits need to be placated. They are known to follow the god or goddess of the rice harvest, called Inari. Because of this, the fox spirits enjoy a nice bite of sushi. Over the years, a specific type of sushi was invented for the roving foxes.

Also called Inari Zushi, the dish features a lovely golden brown piece of tofu, opened up like a pita bread and stuffed with sushi rice. Often, the rice is plain, or it might have some veggies mixed in. The fried tofu also has two corners, which could be construed to resemble the ears of a fox, giving the dish a second meaning.

Many Shinto and Buddhist shrines in Japan today have shrines dedicated to Inari, and shops nearby will sell Inari Sushi to leave as an offering.

The tofu wrapper is called “Abura Age” or as this can says, “Inarizushi No Moto, and you buy it canned, which makes this the fastest, easiest way to wrap your rice. It’s available at Japanese markets and online (one source is here) 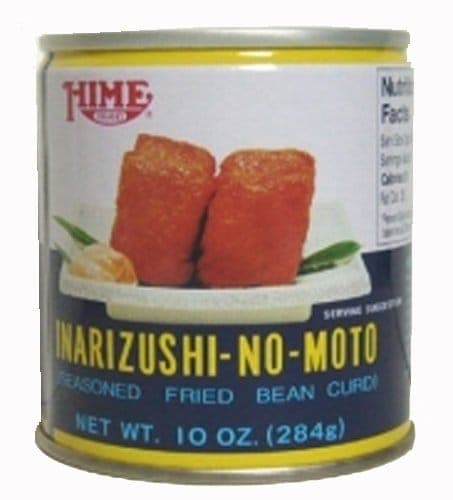 Buy it canned and pre-seasoned

I know that some of you find cooking with tofu a little daunting, so you will be thrilled to give these nifty pockets a try. You can make them yourself, by slicing tofu thinly and deep frying it, then simmering it in a broth of soy sauce and mirin. Or you can buy it. It’s pretty tasty and good in other dishes, too, so give it a try.

To keep to the Japanese tradition of eating seasonal foods, I opted for some lovely kabocha squash in the filling. It’s orange as a fox, and has a wonderful meaty texture (see a previous post raving about kabocha here.) I like to braise my squash, and use the tender cubes in lots of dishes. In making this recipe, you can make just enough for the 12, or you can go ahead and cook extra rice and braise the  whole squash, and take out what you need for this dish.

I always love making extra of things that I will certainly use. The black rice can become a breakfast dish or a quick fried rice, later in the week. And extra bean curd slices can be sliced on salads or stuffed in sandwiches.

Of course, the mythic fox spirits probably have a taste for their traditional white sushi rice, so in this version, my use of black rice might surprise them. I hope that it would delight.

Of course, you could use other grains, like a red rice, or even quinoa, although the dramatic black rice goes so well with the orange squash, it really works in this.

First, cook the rice. Bring the water to a boil in a small saucepan. Add the rice and cover, turn to the lowest setting, cook for about 25 minutes. Let stand, covered for about 5 minutes before seasoning.

Season the rice with the maple and rice vinegar, stir in by folding, don’t break the rice.

For the squash, heat the canola or coconut oil over medium heat in a small saute pan and saute the onions for five minutes. Add the kabocha and stir for a minute, then add the stock and salt and cover. It should cook the squash through in about 5-8 minutes. Uncover, test with a paring knife, and raise the heat to boil off any extra liquid. Let cool, then fold into the cooled rice.

Stuff the rice mixture into the tofu pieces. Garnish with piles of ginger and kimchi, a dab of wasabi, and if desired, pass tamari for additional seasoning.