The New “Hot Grain” and Millet Sushi with Avocado 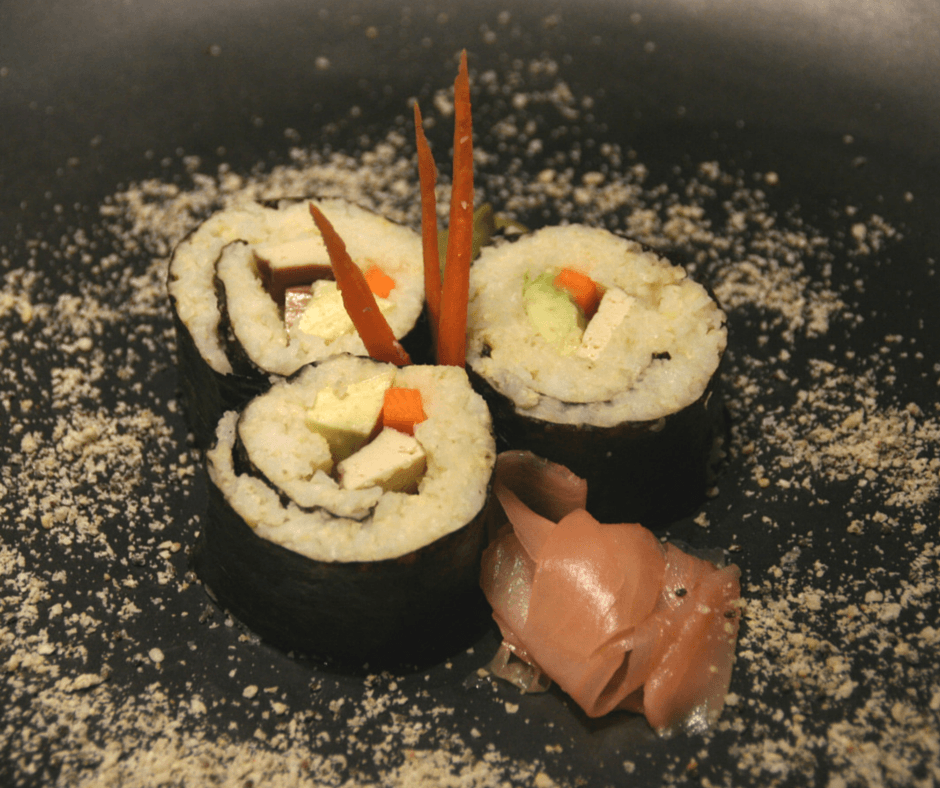 Switch out Rice with Golden Millet

I always love trend predictions at the beginning of each new year. Full of optimism and certainty, brave journalists try to let us know what we will be doing in the coming year. Will cronuts and cake pops fade away?  Will bone broth surpass juicing? We all want to know.

The Washington Post and Time Magazine online both posted lists of foods we will be loving this year. They even weighed in on the popularity contest in whole grain consumption. According to their considered opinion, quinoa will finally step aside and let millet, and possibly buckwheat, take their places in the sun.

Will it come true? Will millet finally make it out of the birdseed aisle and onto our tables? It’s a pretty good guess. If you look at what made quinoa into the mainstream food it is today, you can see some similarities, and also some big differences.

To my mind, the big selling point for quinoa was the protein. In our current obsession with protein (another trend that shows no signs of fading) quinoa has been singled out as a high protein grain. A cup of cooked quinoa has about 10 g, while millet has 6 grams. A cup of cooked amaranth has 9 g, teff has 10 g. Oats have about 7, wheat berries about 7. So quinoa, amaranth and teff are the “high protein” grains. Technically, they are “pseudograins”, but in practice, it really doesn’t matter.

The second big attribute of quinoa that made it a household staple was the ease with which it cooked up fluffy, with separate and not sticky grains. To my mind, that is what differentiates it from its high-pro peers, since amaranth and teff are teeny-tiny and cook up like porridge. Americans have not yet warmed to the idea of a stir-fry over soft porridge, and that is what amaranth and teff deliver.

Millet, on the other hand, has an enigmatic texture, which can cook up separate and fluffy with the right preparation and amount of liquid, or be a porridge or polenta with a little more liquid and a longer cooking time. That quality can be a curse or a blessing, as I meet people who have tried cooking millet and found the texture either too dry or too mushy, and given up on it.

So what else is the big selling point for millet? Well, it is cheap and grown in the USA, for one thing. Its gluten free, which is big these days, and has a lovely yellow color that doesn’t seem too “whole grain” to the critical eye. It has no branny bitterness, and is probably the whole grain that is closest to white rice in flavor. Which makes it a prime candidate for making Millet Sushi.

That cup of cooked millet has about a quarter of your days need for copper, phosphorus, manganese and magnesium, all valuable nutrients. Like all whole grains, it is protective of your heart, has cancer-preventive qualities, and has antioxidants.

If you want to get in on the millet craze, you need to know how to cook it. Then you can make Millet Sushi with Avocado, or whatever fillings you like.

For separate and fluffy millet: Start by dry toasting the grain in the pan. Swirl the grains over medium high heat until they crackle and give off a toasty scent reminiscent of popcorn. Then add water or stock, as little as 1 3/4 cup for very firm millet.

My secret to fluffy, not too dry millet? Saute onions, possibly a mirepoix with some carrots, maybe herbs or spices, then add the dry millet and cook until hot and toasted. Then add liquid. Bring to a boil, reduce to low, and check it in 20 minutes. When all the liquid is absorbed, let stand, covered, for at least five minutes.

For sushi millet: I used 2 cups water to one cup millet.

For porridgey millet: Start with three cups liquid to 1 cup millet. Toast if you want, for flavor. Simmer for about 25 minutes.

For millet congee: Start with 4 cups stock or water, simmer for 30-40 minutes.

So will millet be the hot grain this year? Who can say. I’m happy to see interest growing in any whole grain. If chefs are discovering my little yellow friend, more power to them. 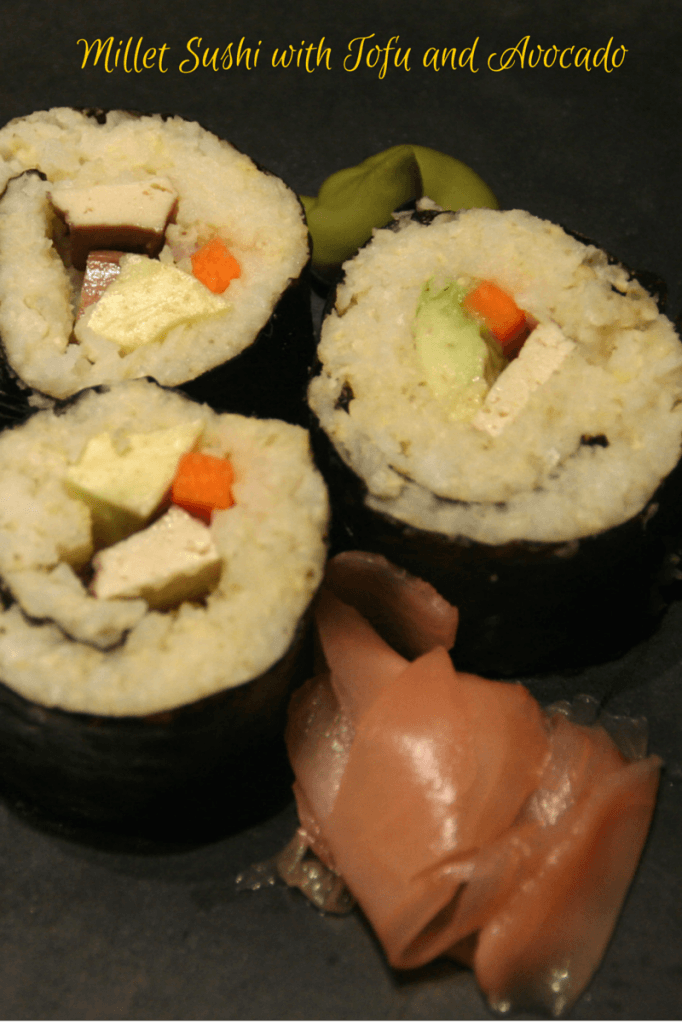 A Little Wasabi and Pickled Ginger on the Side

Millet Sushi with Tofu and Avocado

1 large ripe avocado, pitted and sliced in 1/3 inch wide slices in the shell, then scooped out

gomasio for the plate (a mix of toasted, ground sesame seeds and salt, you can buy or make it)

Bamboo rolling mat, if you have one

First, dry toast the millet in a 1 quart pan over medium-high heat. Swirl it until toasty and fragrant. Take off the heat and carefully pour the water in, it will bubble up when it hits the hot pan, so hold it away from your body. Put back on the heat and bring to a boil, then reduce to low and set the timer for 20 minutes. Check to see if the water is all absorbed, if not, let cook a little longer. Take off the heat, fluff, and cover for five minutes to let steam.

Mix the vinegar and sugar in a cup and drizzle over the millet, then gently fold in. Let cool to room temperature.

Place a sheet of nori on your rolling mat, or you can go rogue and freestyle it. It’s not hard.

On each sheet of nori, spread about 3/4 cup of millet, to cover about 3/4 of the sheet, leaving at least an inch bare at one end to seal the roll. Pat the grain lightly in place. at the end of the sheet of nori closest to you, place a row of avocado slices, a row of tofu slices, and slivers of carrot to make a neat line of fillings. If desired smear a little mayo in alongside them, or some wasabi.

Pull the nori up and roll the roll, thumbs in back, fingers holding the fillings in place. Don’t roll too tight, the millet will expand and explode the roll. Place each finished roll seam side down on a cutting board.

Slice each roll in 6 or 8 even slices, using a sharp chefs knife. Serve with wasabi, ginger,tamari,  and a sprinkling of gomasio.