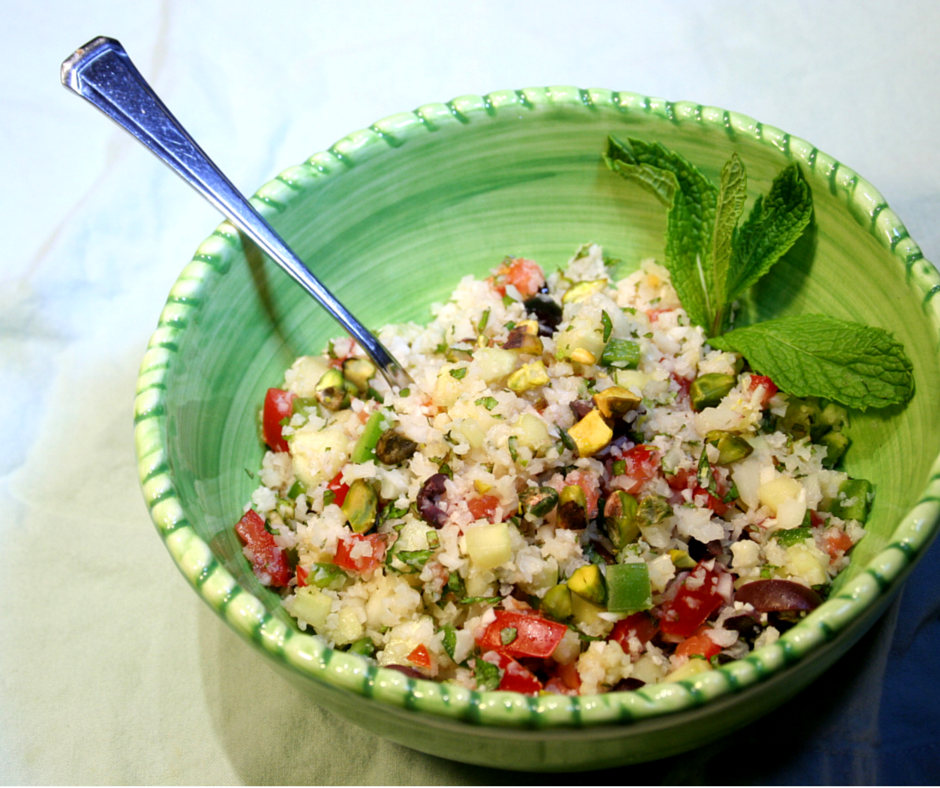 First things first. I love bulghar. Bulgur, bulgar, how ever you want to spell it. Whole grains are the base of the pyramid, and fantastically tasty, too. But sometimes, you need a vegetable side that has just a bit more panache. That, to me, is where cauliflower that pretends to be bits of grain comes in.

It’s not rice, it’s not bulghar, it’s cauliflower. Just as spaghetti squash is not spaghetti (click for a link to that blog post.)

That said, paleos and carb-avoiders have christened cauliflower as the new non-grain, no carb stand-in food. This is a pretty good thing, actually. Far better to eat more cauliflower than to come up with some new faux food. I don’t even know what no-carb fake grain would look like, and thankfully, there doesn’t seem to be an industrial fake rice on the horizon. Unless you count Shirataki noodles and rice, which are strange, to say the least. But not new. The Japanese have been making things from konjac for a couple of thousand years.

So kudos to the grain avoiders, and the gluten sensitives, who have embraced vegetable alternatives to a food that doesn’t agree with you. Zucchini noodles, Sweet Potato “Buns” and other pure vegetable stand-ins are clever ways to slip more veggies into dishes that look familiar, and that you and your family already love.

So I have been making cauliflower “rice” often for my gluten-free friends. It started out plain, something to put a stir-fry over. Then I started fooling around. Raw, sauteed, blanched before mincing, blanched after, steamed. I wanted to make the rice seem rice-like with a mild taste that doesn’t distract.

I’ve found that blanching the florets briefly before mincing in the processor works best. The boiling water pulls out some of the strong brassica flavors, and softens  the cauliflower just a bit. 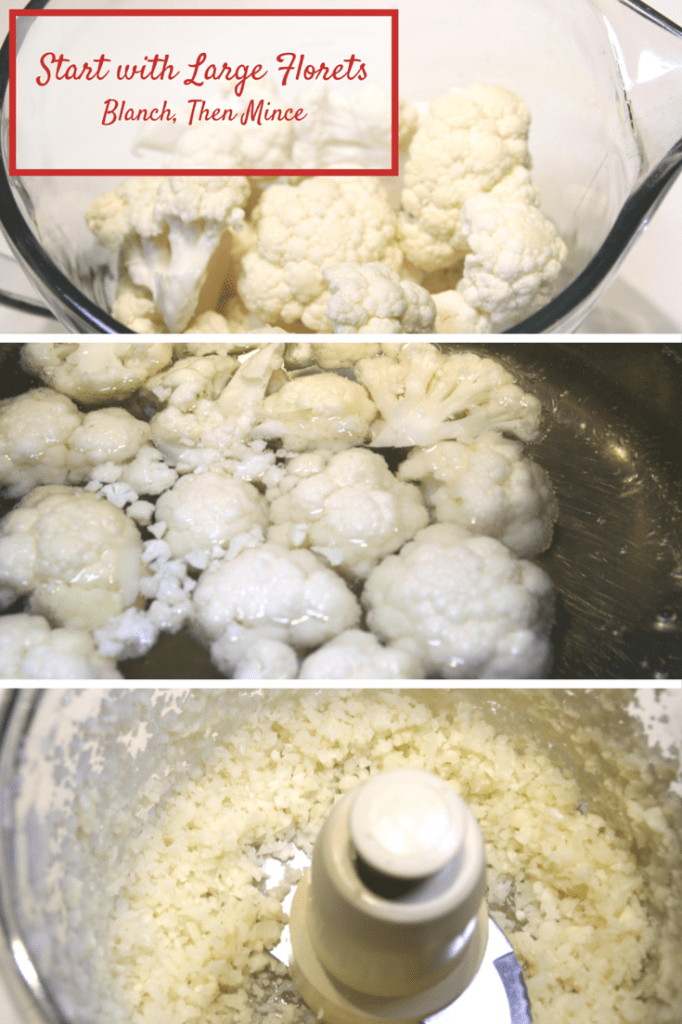 Once you have your cauliflower minced into rice-like form, you can go to town. Use it as you would cooked rice, in Fried Rice, Casseroles, and more. The one big difference is that cauliflower is not absorbent, the way that rice is. You can still mop up your stir fry sauce with it, but it is firmer and doesn’t melt in your mouth like white rice.

Let’s face it, white rice is a blank slate, on which we display other tastes. Cauliflower is a little more assertive.

Truly, the firmness of it really is more like a whole grain. I like to use it with a flavorful sauce or dressing, like this tabouli recipe, to kind of camouflage the cauliflower taste a little bit.

So, whether you are giving up gluten, avoiding carbs, or just looking for a fun vegetable dish, give this recipe a try.

It’s not rice, it’s cauliflower rice. It has its own charms. 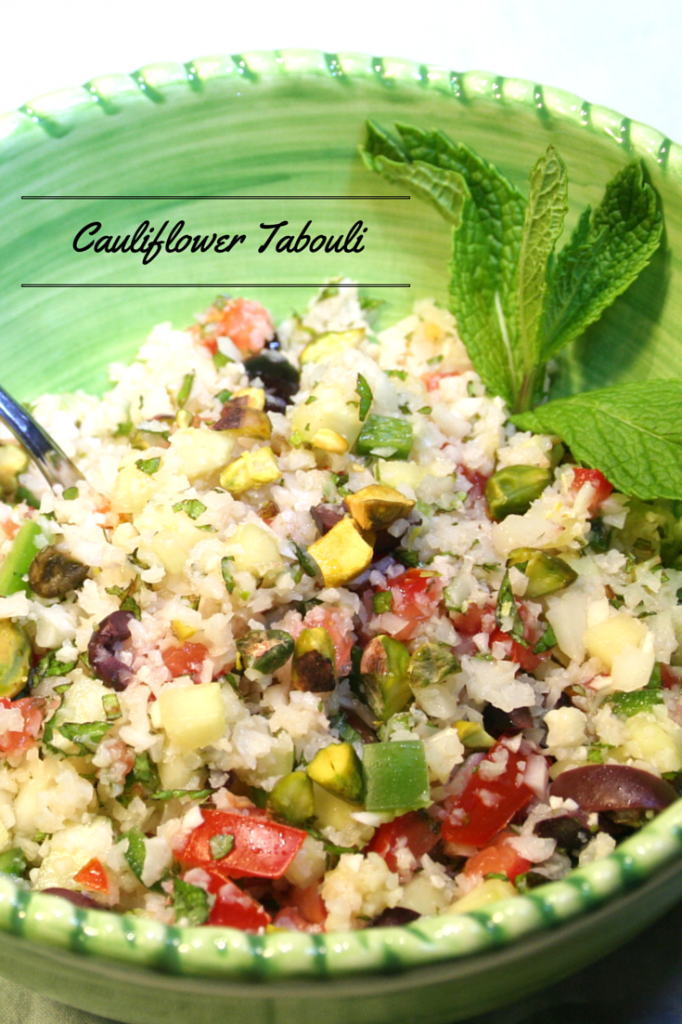 Because cauliflower isn’t absorbent, like bulghar, you don’t need much dressing. I left the handfuls of parsley that I usually put in tabouli out this time, letting the mint come to the fore. And of course, you could add some chick peas for added heft and protein.

Bring a large pot of salted water to a boil. Cut the cauliflower into large florets,and cut the stem pieces into 1 inch chunks. Drop the pieces into boiling water, and cook for two minutes. Drain. Let cool.
In a food processor, put a third of the cauliflower into the bowl and pulse to chop. Scrape out into a large bowl. Repeat until the cauliflower is all made into “rice,” and piled in the large bowl.
Add the jalapenos, tomatoes, and kalamatas. Mince the mint and garlic and put in a cup, and stir in the olive oil, lemon and salt. Pour the dressing over the cauliflower and stir to mix.
Serve sprinkled with pistachios.