Playing with Purple Corn in Cornbread, Grits, and Chips! 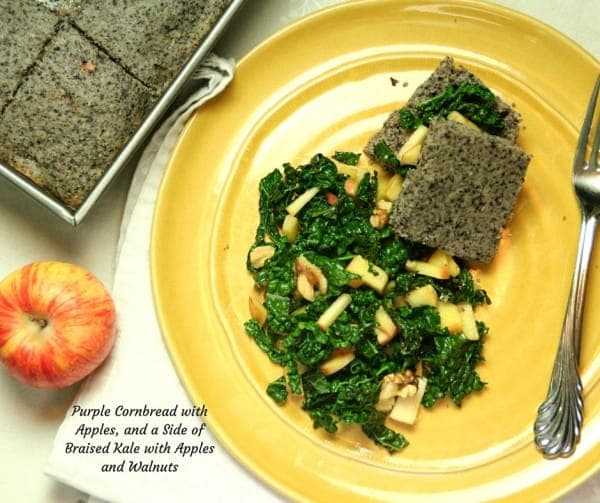 Purple Cornbread with a Side of Apple Braised Kale

It’s funny how you find out about things.

In October I attended a conference of the American Cereal Chemists International. Let’s just call it “grain nerd heaven.” Cereal chemists from all over the world were sharing technology and research, and there was an exhibit hall filled with cool toys, food ingredients, and information. I was strolling through the exhibit hall, taking it all in, when my eyes were drawn to a gloriously colorful display.

It was so striking, I just had to take a picture. 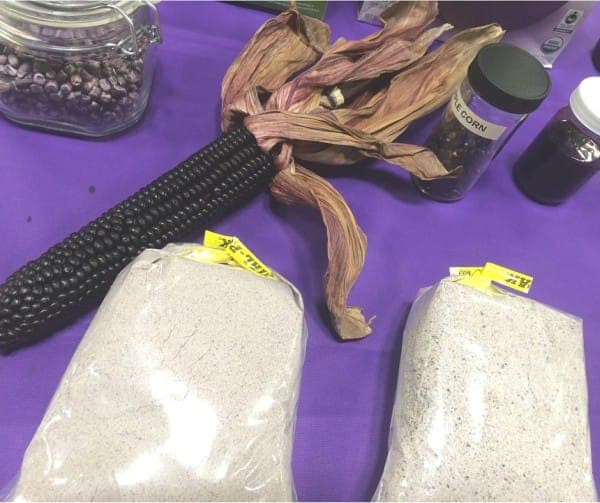 Purple corn. Not blue, but purple.

What’s funny about finding this corn, there, at that moment? Well, among the international, exotic, and high-tech things on display, this corn stood out. It could have been from the moon. I struck up a conversation with the company rep, and asked for some samples of the product to play around with.

It wasn’t until I actually received the samples that I realized that the company growing and marketing the unique corn is based in Stillwater, Minnesota. Just down the road from me. And they have been getting this corn into some products and stores.

And I knew nothing at all about it. Kind of funny.

But now I do. And it’s purple, and delicious.

So, why am I excited about this colorful corn? First thing, it’s not some Franken-corn, it’s a natural, non-GMO variety of corn, developed from varieties of ancient maize. The Suntava people wanted to create a new strain of purple corn that was more disease resistant and easy to grow. To get it going, they had to hand pollinate the plants in the field for a few years, until the Suntava corn was established.

The purple pigment infuses the entire plant, from the stalks to the leaves, creating a dramatic effect. The pigment is so plentiful that the Suntava people have created an extract from it that food manufacturers can use to tint food and amp up the antioxdant content, naturally.

We already had blue corn, so what is the big deal about purple corn? Well, like my previous purple food obsessions, purple sweet potatoes, purple carrots and the almost purple blue potatoes, this purple food is packed with antioxidants. If you’ve been buying blueberries by the bag to puree in your smoothies, you probably know that there are some amazing health benefits to eating deeply colorful food.

The unique, purple antioxidants are called anthocyanins. You probably know that antioxidants get their name for their ability to protect your cells from oxidation, sparing them from premature aging and preventing cell damage. These purple anthocyanins have been studied and found to prevent heart disease, cancer, diabetes and obesity, and to be anti-inflammatory.

And that is a good reason to seek it out.

But come on- IT’S PURPLE! Sure, I get a little jazzed when I hear something is good for me, it’s true. But what really gets me going is a new color in my food palette. Eating the rainbow is not just good for you, it looks great on the plate to have bright, intensely colored foods next to one another.

I was excited to give purple corn a trial run, just to see how the pigment would develop in a finished dish.

For a first experiment, I plugged the purple cornmeal into my cornbread recipe, and added some diced apples for a seasonal touch. I wanted to see the colorful cornbread next to some deep greens, so I braised some Tuscan kale with diced apples in apple juice. I left the red peels on the apple pieces, for a little more color contrast. 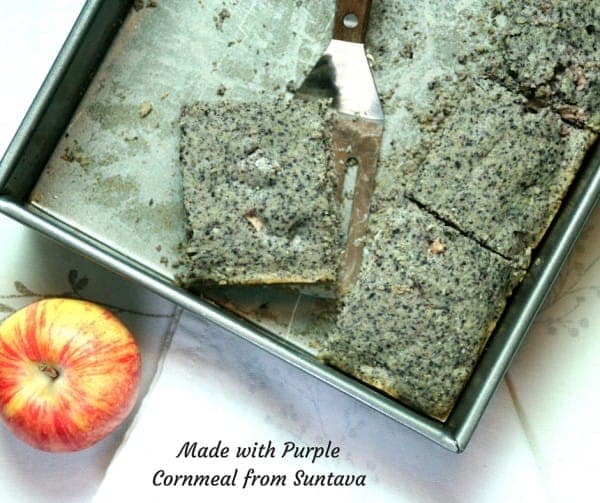 The other exciting product that I couldn’t wait to try were the purple grits. Now, I am a Minnesotan. I’m about as Northern as it gets, as you can see by the sugar in my cornbread. But I have a deep appreciation for good grits. Not the degerminated, quick-cooking kind, but real, old school grits.

These chunky purple grits are in their own category of old-school, harking back more to something an Andean might have cracked with a stone than something you’d get on the side in a New Orleans restaurant. They are so chunky, you actually need to soak them overnight. After a soak, the still took about an hour to cook.

But look at them, after I stirred in some parmesan and a chunk of butter: 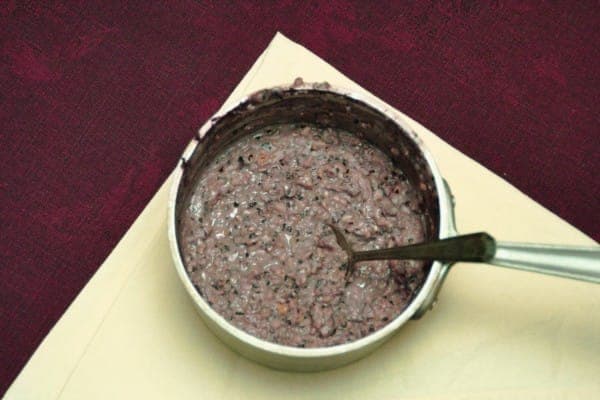 For fun, I served the technicolor grits to some guests, topped with a fried egg, fried sage leaves, and sauteed grape tomatoes, with garlicky aioli on the side. They were a lovely lavender, flecked with bits of purple corn bran. 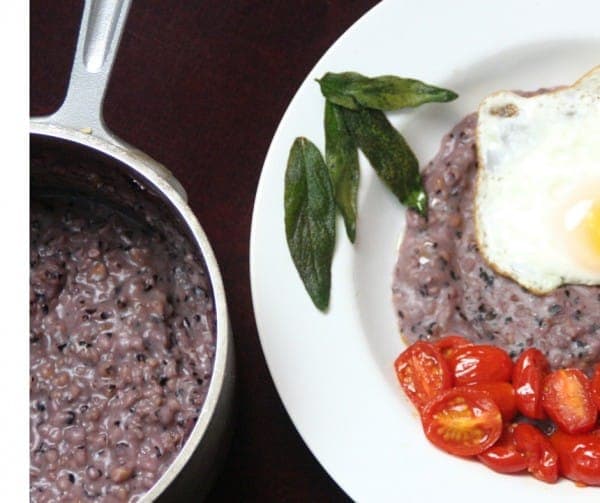 With an egg and some fried sage leaves…

On a visit to a local Coop, I came across a bag of chips made from the Suntava Corn, so I went ahead and bought them. how I missed them before, I don’t know. I guess I don’t spend that much time in the chips aisle. 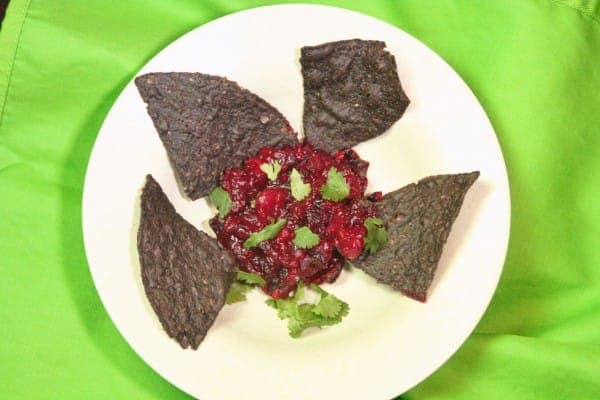 For a colorful companion, I threw about a cup of cranberries and a couple of tablespoons of raw sugar in a pan, and brought it to a simmer until the berries burst and it thickened. A jolt of hot sauce, a pinch of salt, and some cilantro, and I had a very simple cranberry salsa.

The purple anthocyanins gave the chips a deep, dark color, and it looked and tasted great with the tart and tangy salsa.

I am thoroughly happy with the beautiful purple corn, and plan to keep experimenting with it over the winter. I know I’ve just gotten started.

It will be a beautiful ride.

You can read more about the company, and order the corn at the website of Suntava Purple Corn. 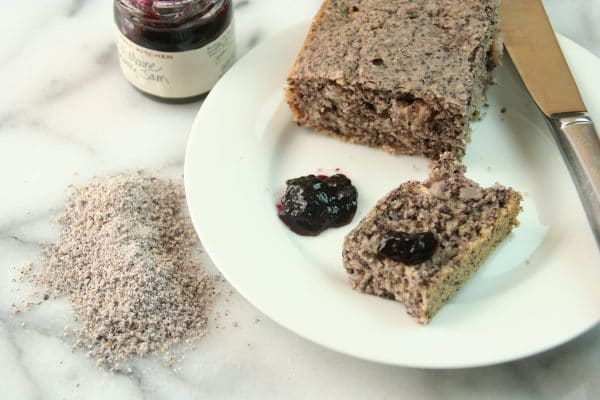 1 bunch Lacinato or other kale

In a large bowl, combine the flour, cornmeal, baking powder, salt and sugar, stir to mix.

In a medium bowl, combine the milk, oil, and water-flax mixture or egg. Whisk to mix.

Stir the wet mix into the dry mix, then stir in the apple. Scrape the batter into the prepared pan and bake for about 20 minutes, until a toothpick inserted into the cetner of the pan comes out clean.

While the cornbread bakes, heat the olive oil in a large saute pan over medium-high heat. Add the kale and stir until it starts to wilt. Add the apple cider or juice, the died apples, and salt, and bring to a boil. Cover the pan for a few minutes to wilt the kale to your desired level of tenderness.