Whole Wheat Bao with Black Bean Tofu, The Steamed Bun for Everyone 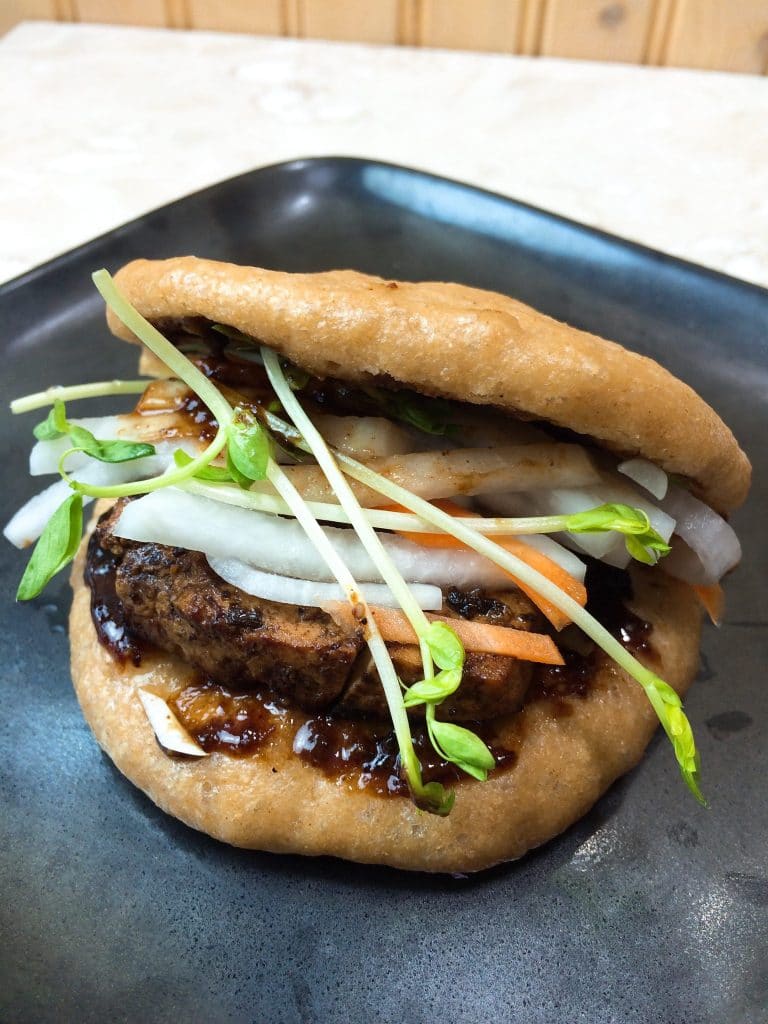 Take a big bite of bao

Bao are hot right now. At least if you pay attention to all the chatter about places like Momofuku in NYC. Bao are simply Chinese steamed buns, and they come in many forms. The folded bao that they serve at places like Momofuku are made with a fluffy, sweet white flour bun, that is opened and stuffed with a hunk of pork and some scallions and pickled vegetables, all with a smear of hoisin sauce.

Basically, a sandwich on fresh, warm bread, filled with savory, crisp, sweet and sour. No wonder everybody loves them. Of course, I had to make some with tofu, instead of pork.

These buns are the descendants of a Taiwanese festival bun, Galled Gua Bao, and according to Lucky Peach, they were originally an offering to the Earth god, because they resemble a purse overflowing with money. Now they are sold at street stalls in China and all over the world.

The Bao is about the size of a slider, with a very particular kind of bread. I’ve been making dim sum for many years, and teaching classes on the art of steamed buns, dumplings, and other tidbits. The first time you have steamed bread it is a revelation, because the crust is soft and pale, rather than crisp and brown from the oven. The dough is always salt-free and has some sugar in it, making it a completely different experience from our Western bread.

For my whole wheat bao, I used white whole wheat flour. It’s paler and a little finer in texture, depending on the brand. It’s also a little lower in gluten, so it can make a tender dough, if you don’t over-knead it. I used coconut oil in and on the dough, a trick I came up with to replace the traditional lard. Lard is big in Chinese cuisine, where pork is a long time favorite food. Coconut oil has a buttery mouthfeel and a relatively neutral flavor. I used refined, not extra-virgin, just to keep the coconut flavor from being prominent. The dough is usually leavened with both yeast and baking powder, so it gets a nice rise in the steamer.

I have a large stainless steel steamer that I bought for making large quantities of steamed dumplings and buns, but if you don’t have one, you can rig one from things you have around. A plate, placed on a cake rack in a large pot of simmering water will work. you just need to be able to keep the water from touching the bottom of the plate, and to close the lid tightly. I’ve even used four wads of foil in the bottom of the pan to hold the plate above the water, and it worked. You just need the buns to be in steam, not water.

Once I mixed up the dough, it was quite tacky, which is good. Whole wheat flour absorbs more water than white, and it takes it a few minutes to do it. It’s far better to have a sticky dough and knead it a bit on a floured counter, then let it rest, than to add more flour at the start and have a dense, heavy bread.

Once I let it rise for an hour, the dough was supple and easy to shape. I divided it in 12 pieces and formed each into an oval, brushed it with coconut oil, and folded it to make the bao shape. Just fold it, don’t press, and the coconut oil will keep the bread from melding completely. Then I placed each one on a parchment square and on the steamer pan. I let them rise for 30 minutes.

While all of that was going on, I had tofu baking in the oven, coated with black bean sauce and hot sesame oil.

The tofu will never be as unctuous as I imagine pork belly to be, but it is pretty darn tasty in its own right, with all the umami of fermented black soy and tamari smeared over it. 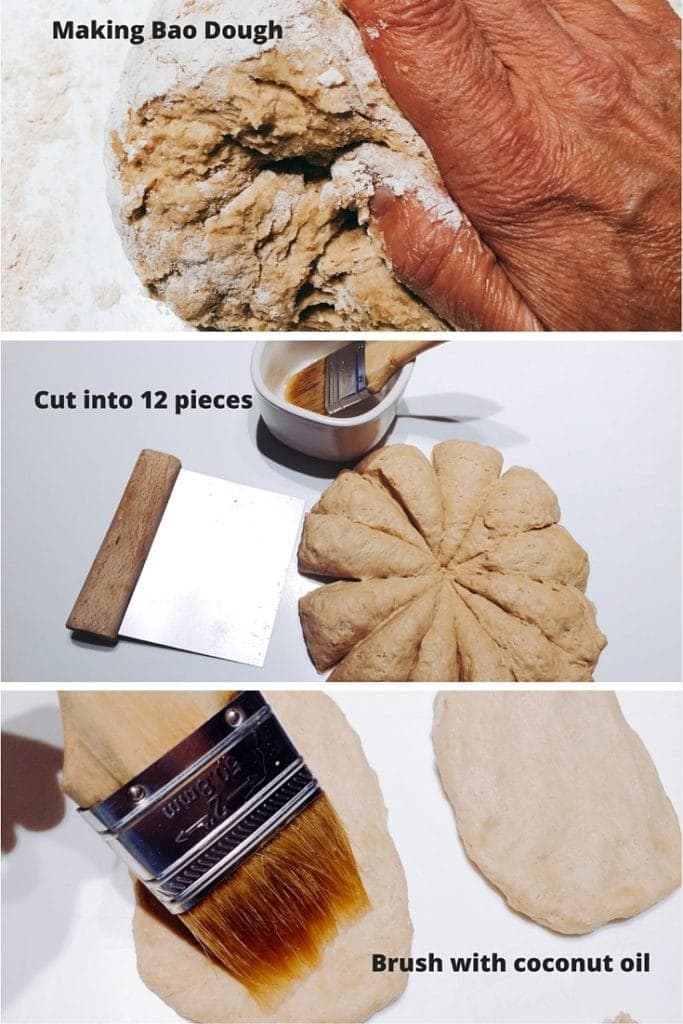 I steamed the buns for about 20 minutes over medium heat, giving them some time to puff in the steam. 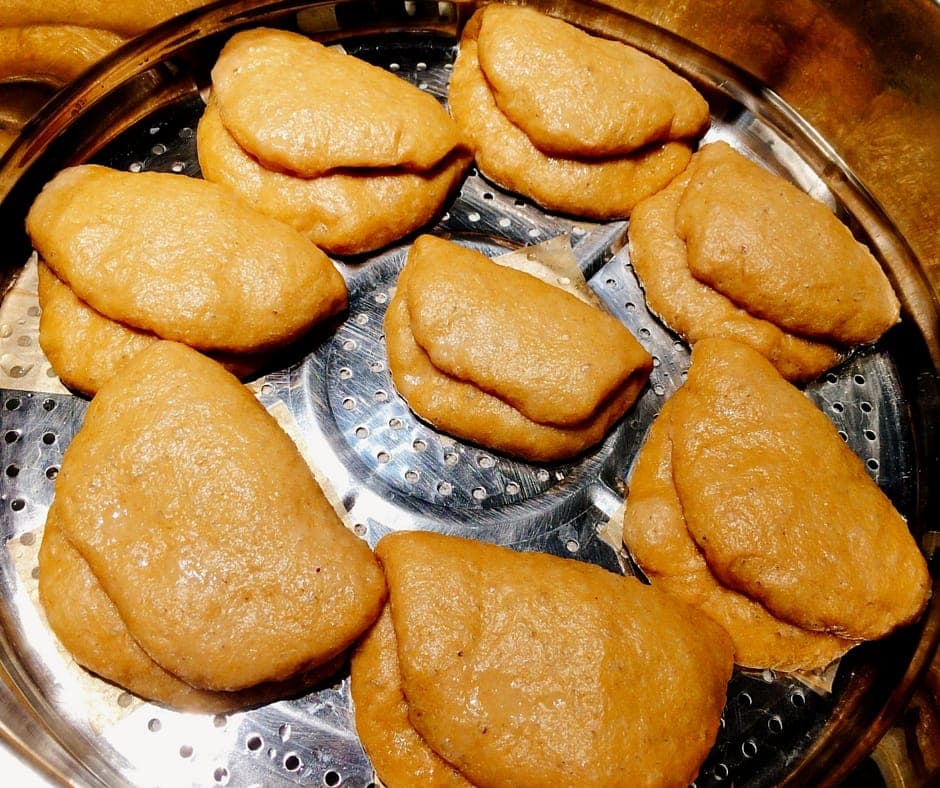 Bao buns in the steamer

For the finished bao, I stirred up some hoisin sauce with peanut butter and honey, for a salty sweet spread. Some minced scallions, pea shoots, and julienned daikon and carrots tossed with rice vinegar and salt were all I needed. 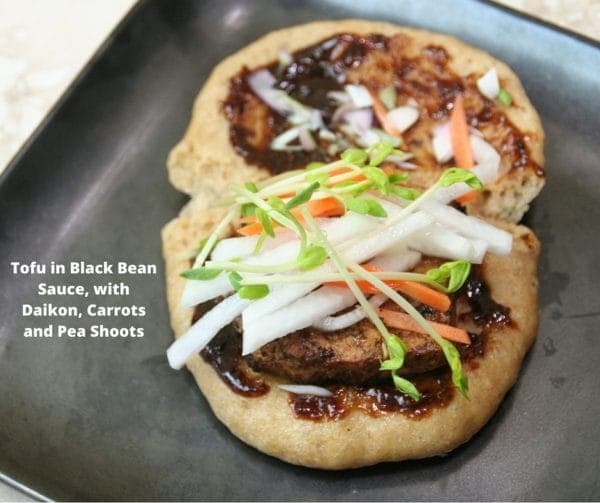 Preheat the oven to 400 F. Oil a sheet pan and reserve. Mix up the black bean sauce, tamari, hot oil and honey in a medium bowl. Press the tofu in a towel and then slice it into 6 1/2 inch thick slices, then slice them in half to make 12 squares. Gently coat the tofu with the black bean mixture and place on the baking pan. Bake for 30 minutes, let cool.

Cut parchment into squares about 2 inches by 2 inches. You need 12.

For the dough, stir the flour, sugar, yeast and baking powder in a large bowl. In a cup, mix the warm water and melted coconut oil and stir into the dough. Stir until it becomes a shaggy mass, then knead gently to mix. When it becomes sticky, place on a floured counter and knead until a soft dough is formed. Place in a oiled bowl and cover with plastic wrap for an hour.

Prep the fillings, combine the carrot, daikon, vinegar and salt and toss, let stand. Mince the scallions and reserve. Mix the spread in a small bowl and reserve.

To make the bao, divide the dough into 12 pieces, then form each into an oval. Flatten each on the counter to make 5-6 inch long, 3 inch wide ovals of dough. Baste each on both sides with coconut oil, then fold and place each on a parchment square on the steamer tray or plate you will be using.

To serve, open each bun and smear with hoisin sauce, sprinkle with scallions, place a tofu square inside and top with the daikon mixture. Top with a few pea shoots. Close and serve immediately, with Sriracha sauce on the side. 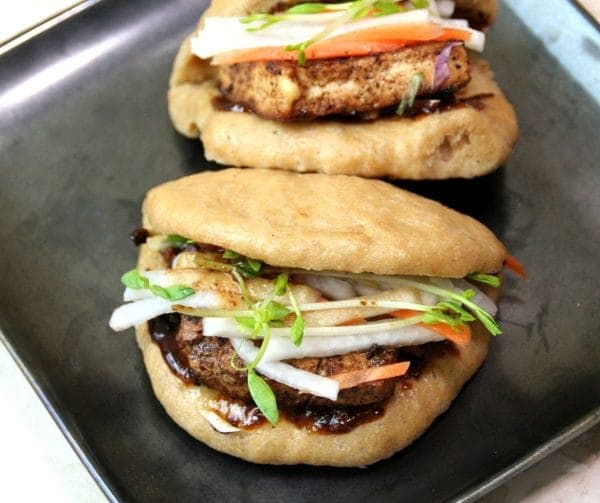