Get into Whole Grains Month with a Granite Grain Bowl! 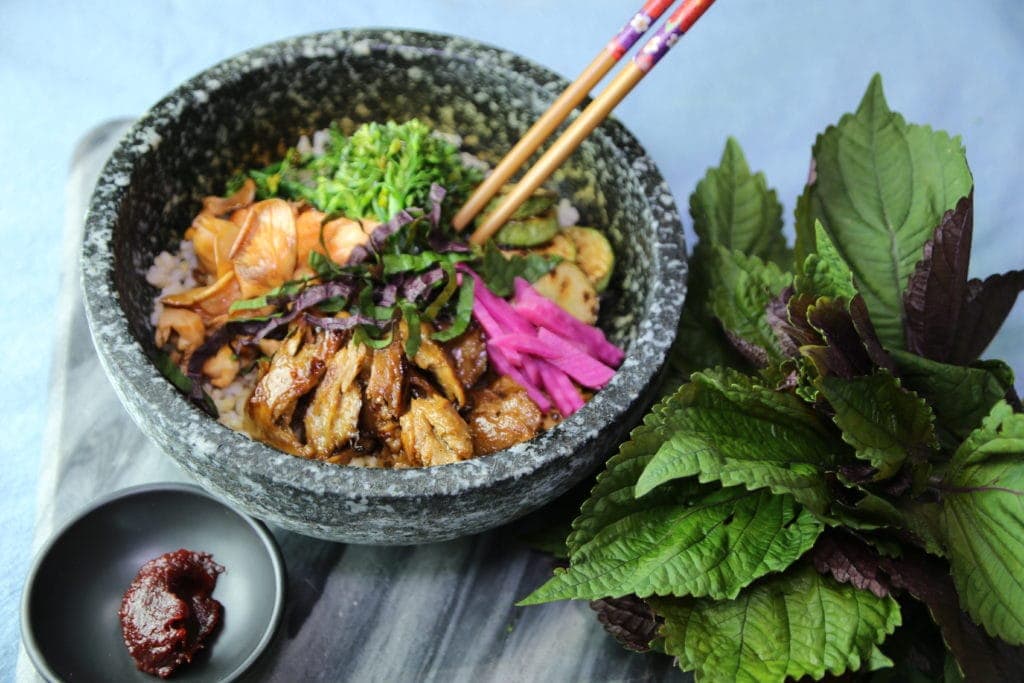 The hot granite bowl crisps the rice and steams the toppings

I started early, and posted last week with a FREE COOKBOOK GIVEAWAY, so click here to enter to win, and check out Sweet Potato Toast on Toast.

The whole month of September you can be on the lookout for whole grain recipes, information and product specials to crop up all around you. Thanks to the work of folks at the Whole Grains Council, there will be a whole month devoted to raising awareness of healthful, sustainable whole grain foods.

To kick off the month, I wanted to show off my new toys, the Korean granite bowls I got at United Noodles. The granite bowl is a traditional cooking tool, sometimes called a Dolsot. If you don’t have one, you can crisp the rice in a hot cast iron skillet, or just skip the crisping and enjoy the Korean flavors in the bowl.

Cooking with hot stones goes back to prehistory, so it feels kind of primal to heat a rock and use it to prepare dinner. Of course, this lovely, machine turned granite bowl is a very evolved version of a hunk of stone heated in a fire, and thankfully so. It’s traditionally used for Dolsot Bibimbap, which is what inspired this recipe. You can also use it for stews like Doenjang Jigae and Kimchi Jigae, in which the hot stone both cooks and keeps warm a bubbling pot of stew.

When I bought the bowls, I took the step of soaking them in water, then putting them on the stove filled halfway with water and a generous pinch of salt, and heating them over low heat. Once they came to a simmer, I turned off the heat and carefully dumped out the hot water, and reheated them until they were dry. Then I brushed them with sesame oil to season, just like I would season a cast iron pan. 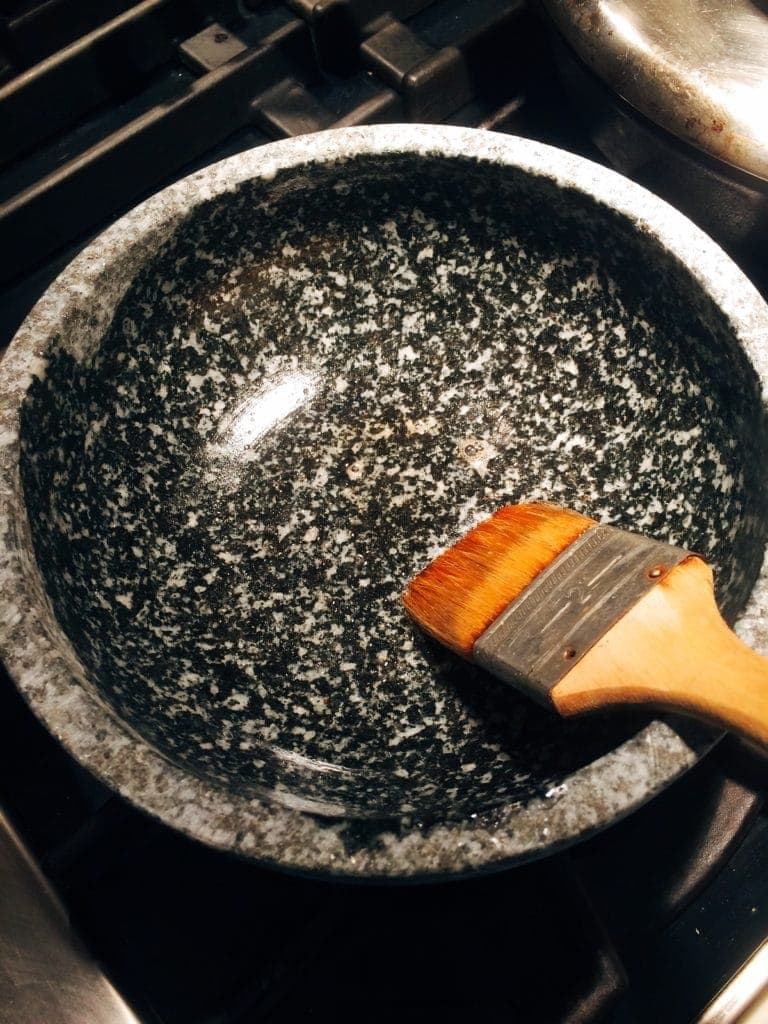 Seasoning my dolsot with sesame oil

The granite bowl is actually safe up to 650 degrees fahrenheit, as long as you heat it up slowly and let it cool naturally. I was a little nervous about putting it over the gas flame, but it did just fine.

The point of putting the rice in the hot stone bowl is to crisp the bottom of the layer of rice, for a crunchy, chewy texture. The crispy layer of rice is called jurungji. Of course, this is usually made with white rice, but we are all in for whole grains, and it is just as fantastic with medium or short grain brown rice. 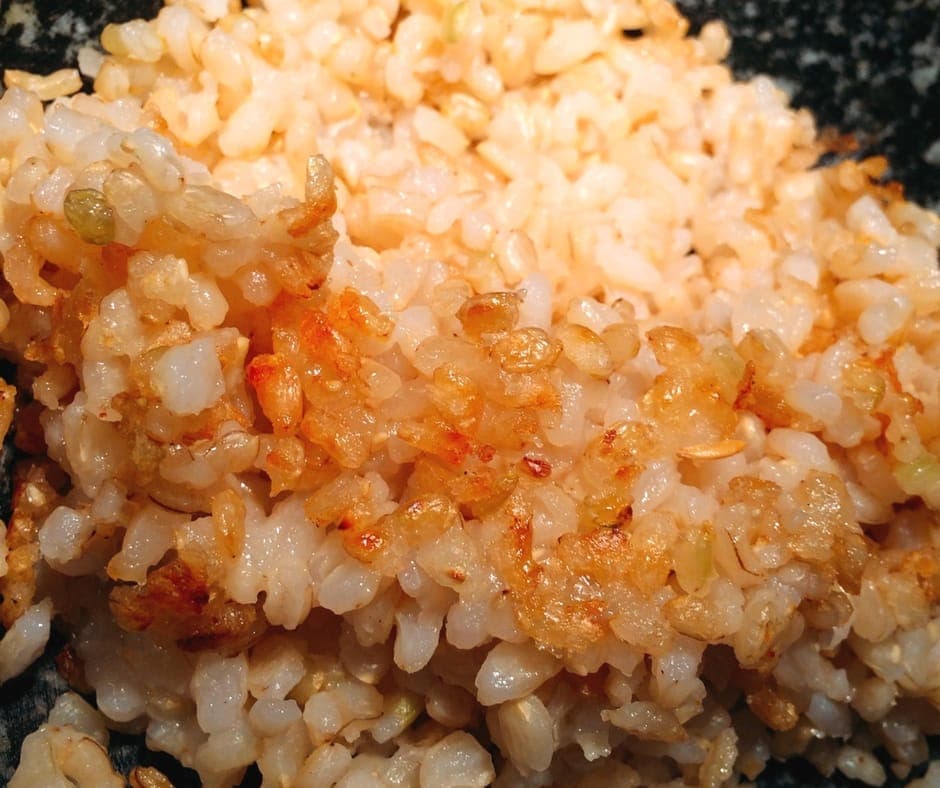 After 10 minutes in the hot bowl

I love Korean food, as you may have noticed, as I have been touting the joys of gochujang for a while now. Try these recipes once you buy some, you’ll love  Grilled Corn Pizzas. 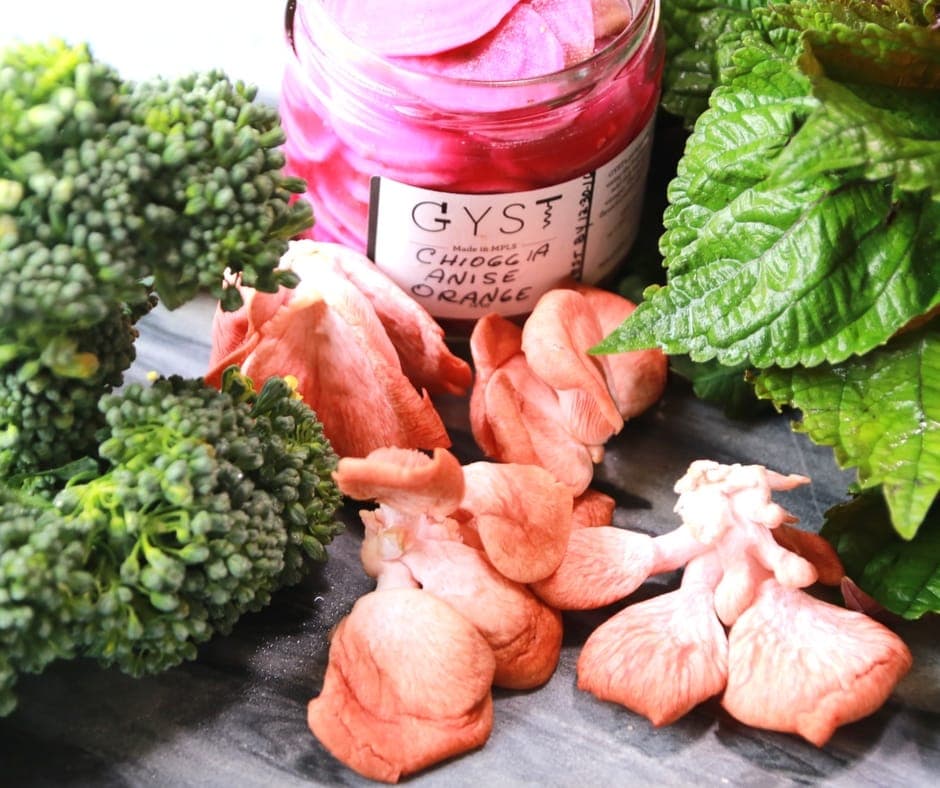 So I assembled some of the fresh and fabulous ingredients that would make a great bowl. I lucked out and found some pink oyster mushrooms at my Coop, and wanted to honor them by just barely searing them  and seasoning with soy sauce. I had some locally made fermented Chiogga beets made by the good people at Gyst and I lucked out and found some fresh and fragrant Shiso leaf. Shiso is a basil-like herb that is traditionally used in Japanese and Korean cooking. Broccolini and teeny baby zucchini were looking good that day, and I had a craving for mock duck.  A Bibimbap bowl is always served with lots of Banchan, the Korean side dishes and toppings that make a simple bowl of rice into a celebration of fermented and quickly cooked vegetable flavors.

I took the time saving step of simplifying it a bit, just sauteing each veggie and seasoning it, and topping it all with fermented beets and fresh shiso. A schmear of gochujang makes it all complete.

So if you want to try some tasty brown rice topped with winning Korean flavors, give the Dolsot bowl a try. Modify it to use up the vegetables you have on hand, and it can be a quick and delicious bowl meal. 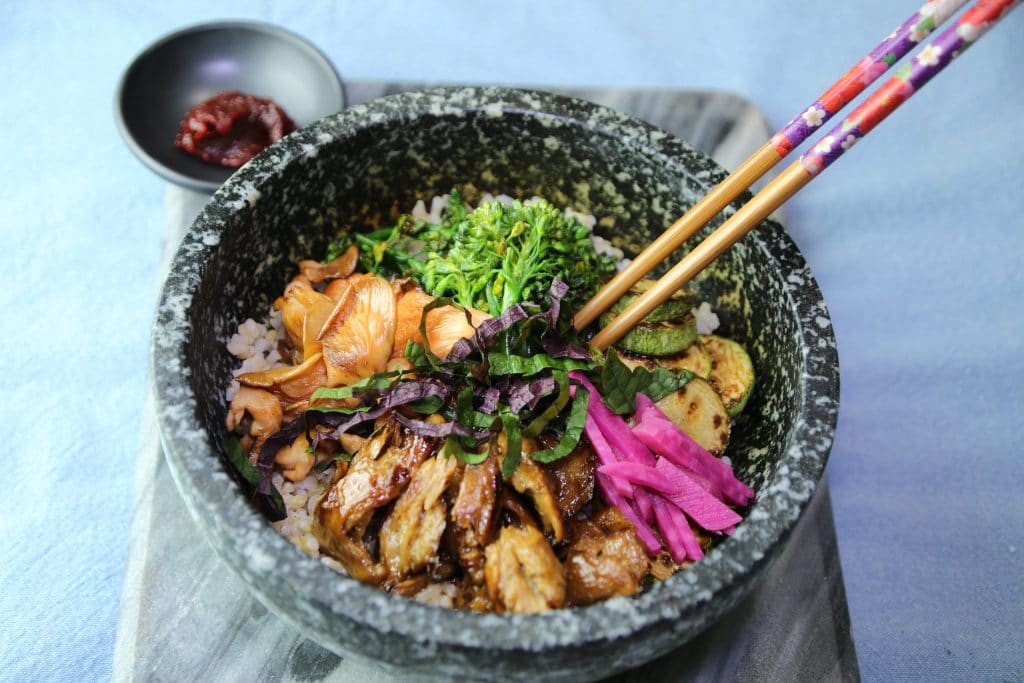 My mouth is watering!

Season two granite bowls by brushing them with sesame oil. Place over medium heat for 15 minutes.
While the bowls heat, stir fry all the ingredients separately. Have a plate ready to hold them as they are ready. Place a wok or large skillet over high heat and let it heat for a minute, then swirl in a bit of canola oil. Quickly stir fry the broccolini, just searing for a few seconds per side, then splash some shoyu over the broccolini, and stir until evaporated. Move to the plate. Repeat with the zucchini, searing, then splash with shoyu and vinegar. Transfer to plate. Sear the oyster mushrooms, and splash with shoyu and a pinch of salt. Stir fry the mock dusk, and when browned, sprinkle with shoyu and maple syrup, then toss in the pan until glazed. Transfer to the plate.
In each bowl, press 1 cup brown rice to cover the bottom. Arrange the vegetables and mock duck over the rice. Move the hot bowls to large heavy plates or some other stone board that can be carried to the table. Let stand for 10 minutes to crisp the rice, then garnish with beets and shiso.
Serve with gochujang on the side.