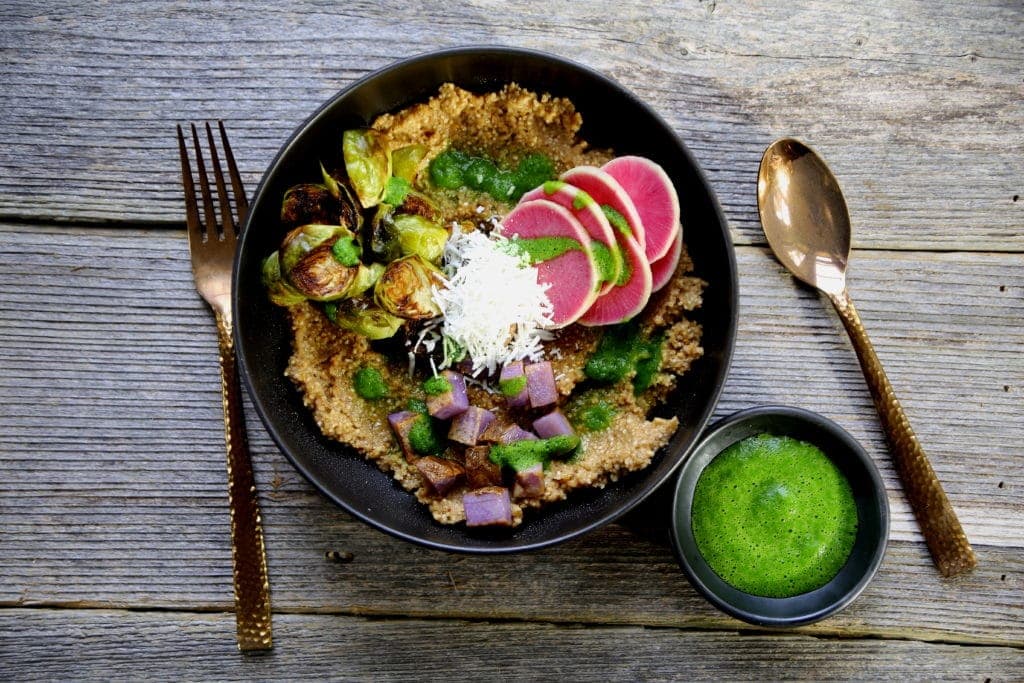 A bowl of Tibetan Tsampa with Westernized Touches

Have you ever wanted to be a little bit more like the Dalai Lama? More serene, loving, and inspiring to everyone around you? Well, you may have a few thousand hours of meditation to get through first, but on your way, you can try eating the same thing for breakfast.

No matter where he goes, the spiritual leader of the Tibetan people dines on the traditional Tibetan tsampa and butter tea breakfast of his native land.

Now, thanks to Sherpa foods, you can buy pre-roasted and ground barley tsampa, seasoned with a touch of Himalayan sea salt. Boil some strong tea, whip in some butter, and stir it into the tsampa for the breakfast of a Lama. Or, for a more Western approach, try one of the flavored varieties, like Toasted coconut, Apple Cinnamon Pecan, Cherry Almond Cranberry, or even Chocolate Almond. 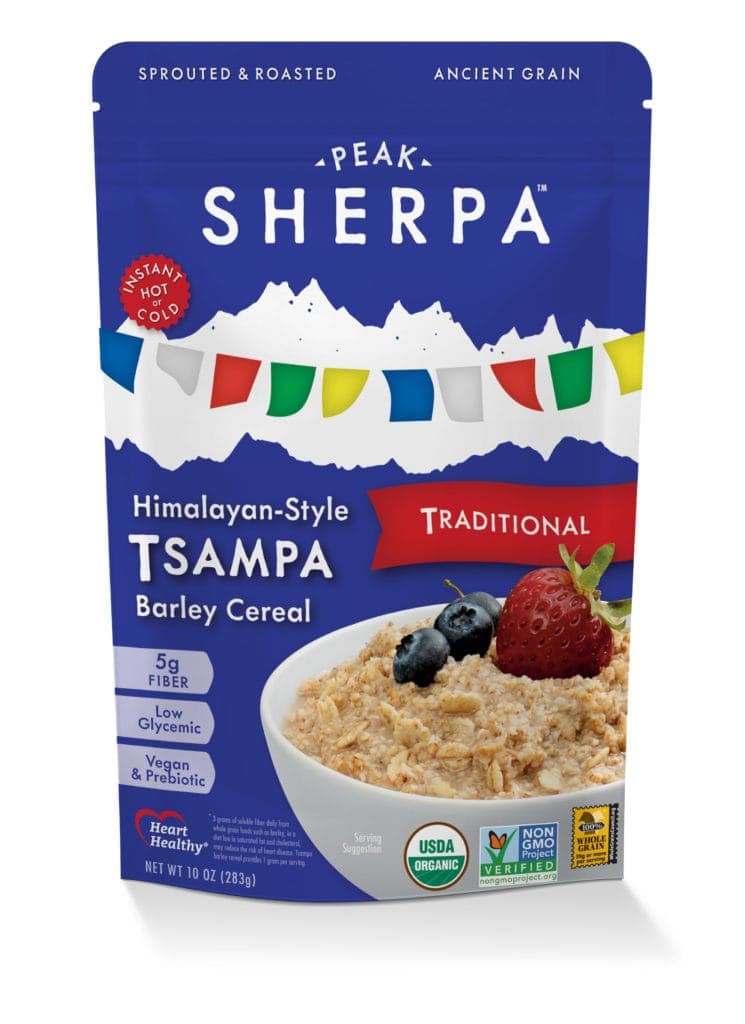 Tsampa Has a Storied History

In the frigid, mountainous region of Tibet, not much grows. For centuries, barley has been a staple, because it is hardy enough to be cultivated there. The natives survived on a spartan diet, comprised of few root vegetables, milk and meat. It’s a place where staying warm and fed is about survival more than gourmet pleasures.

This ancient barley, like the quinoa of Peru, is such a nutrition powerhouse that it has served as the central source of nutrition for the Tibetan people. Toasted and ground barley flour was the convenience food of the region, requiring only hot water to reconstitute. It is still served in restaurants, and diners mix the powdered barley with tea to make a thick, moldable paste, which is eaten like bread.

Tibetan Tsampa is such a cultural touchstone that calling a Tibetan a “tsampa eater” means she is part of a growing group struggling to keep the Tibetan language and culture alive.

The Yuthok family,  brother Renzin and sisters Namlha and Tsezom, are the founders of Sherpa Foods. They come from a long line of Tsampa eaters, and are passionate about spreading the goodness of this ancient food. “Tsampa is such a unique food with amazing cultural significance and history,” says Renzin, “I felt that I had to help tell its story, preserve the traditions of the Himalayan people, and share our ancient food with the world.”

If the incredible nutritional benefits of organic sprouted barley and the tastiness of a hot bowl of goodness aren’t enticing enough, Sherpa Foods warms your heart even more by donating a percentage of sales to the Sherpa people, who have been devastated by earthquakes, poverty and oppression. 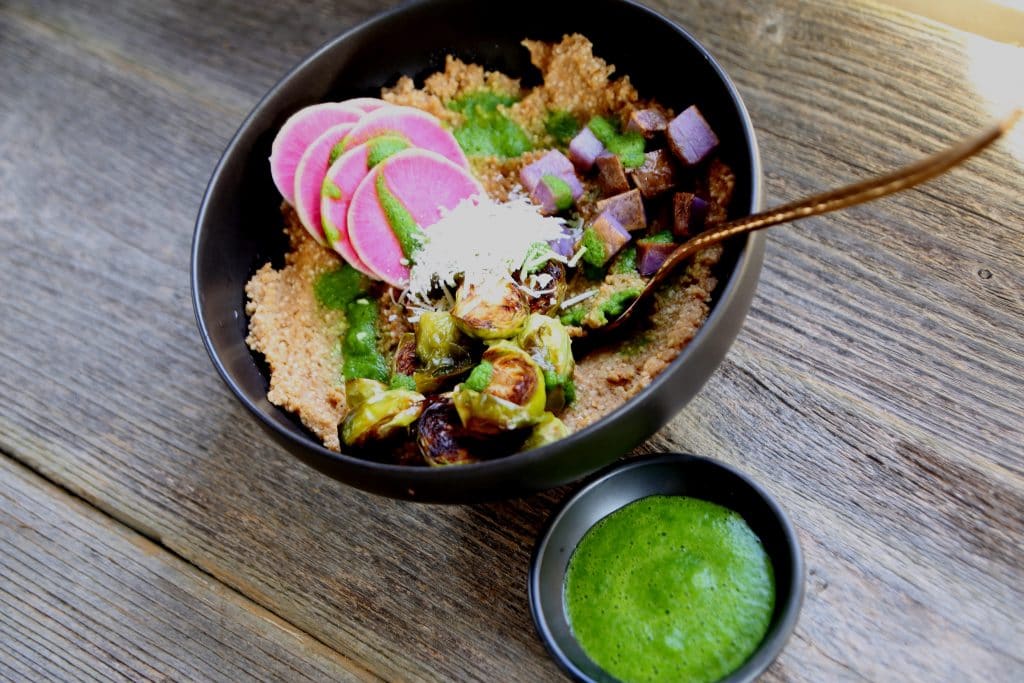 Climb Your Mountain with Tibetan Tsampa

2 small watermelon radish or part of a daikon

First, make the sauce: Place the rice vinegar and water in the Vitamix, then add the remaining ingredients. Secure the lid and select Variable Speed 1, then turn on the machine. Gradually increase the speed to 10, then High. Blend until smooth. Transfer to a bowl or pitcher. Makes more than you need.

Vegetables: Preheat the oven to 425. Toss the potatoes with a little oil and place on one end of a sheet pan, toss the brussels with oil and place at the other end. Sprinkle with salt as desired. Roast for about 25 minutes, until browned and tender.

Pa: Put the hot tea in a jar with a tight-fitting lid and add the butter or coconut oil, put the lid on and hake the tea vigorously until the butter is melted and emulsified. Place the Tsampa in a medium bowl and pour the hot tea over it, stir it in. Let stand for a few minutes. Taste, if you want more salt, add it, if you think the grain is too firm, microwave it a minute or so.

Serve the Pa in bowls, with roasted vegetables, Myzithra cheese, and hot sauce on top.