The Herbivorous Butcher Takes Over The World! And My Banh Mie. 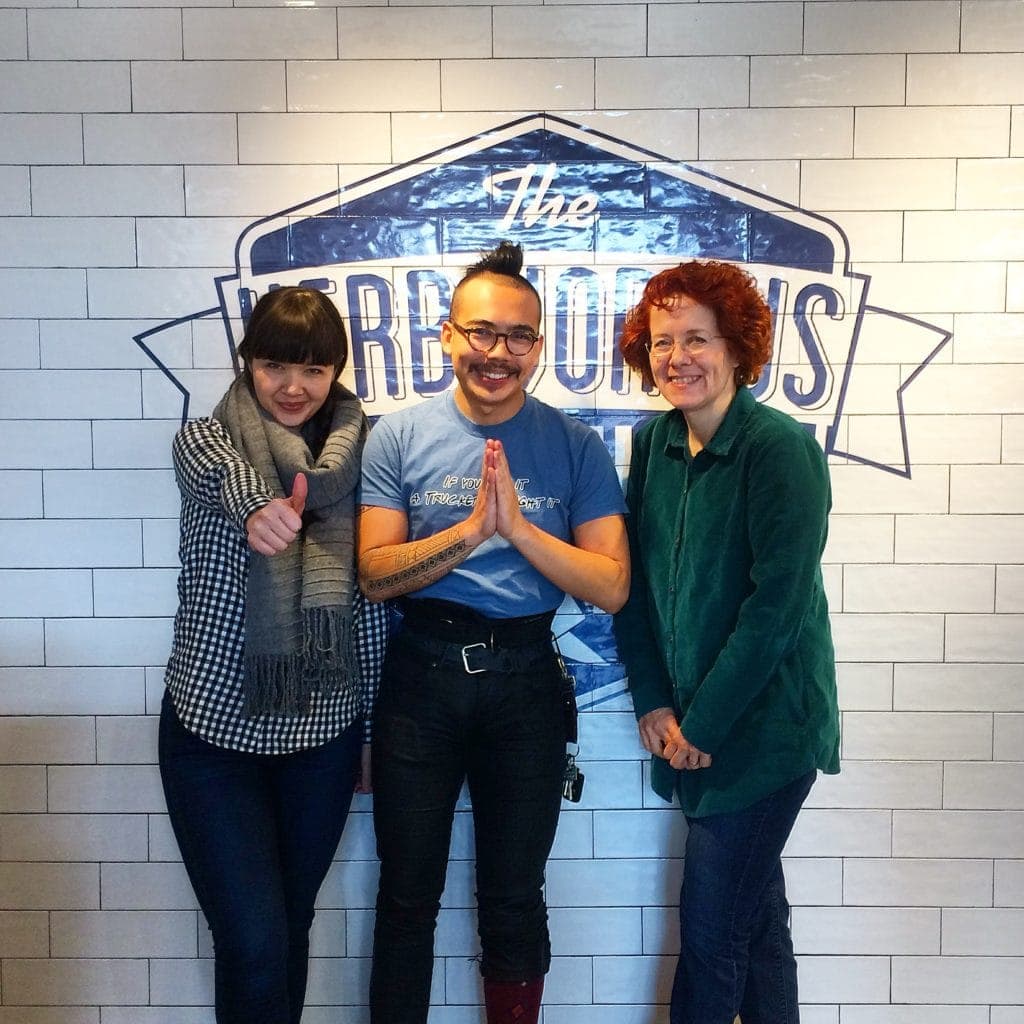 Aubry and Kale Walch at the Herbivorous Butcher

Minneapolis may be famous for the Twins, for Mary Tyler Moore (RIP) and for its Chain of Lakes. But these days, in the world of food, we are now famous for the Herbivorous Butchers.

Yes, the brother and sister team of Aubry and Kale Walch have captured the imaginations of press the world over, with their inspired renditions of mock meats and cheeses. In just a year, they went from spending their days giving away samples at the Farmer’s Markets to selling 3,627 pounds of faux meat and 516 pounds of non-dairy cheese in December ’16, and they can’t keep up with demand.

They have been written up in the Guardian, Time, Zagat, Buzzfeed, The New York Times, Vogue, and a list too long to repeat. Diner’s, Drive ins and Dives paid a visit, and put the charming pair and their unique shop on food tv. 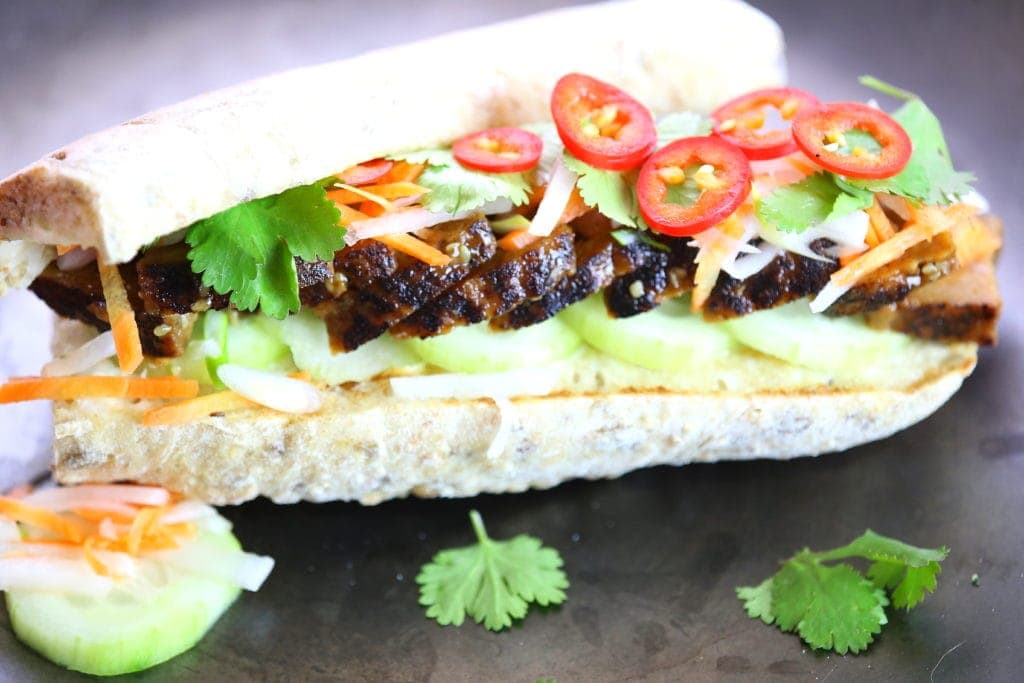 So how, exactly, have the ‘Butchers taken seitan, a food made since the 6th Century in China, and made it so hot?

First, they didn’t like the products out there, and became obsessed with making new, better tasting versions of the ancient seitan we know as mock duck, or wheat meat.

“We thought we would have a little lifestyle business, just us making making it. We didn’t think about all this when we were at the Farmer’s Market. Now we have seven employees in the kitchen, and twenty in the store.”  said Aubry. “Now we want to put our butcher shops in other cities.”

From where I stand, the sampling was where the ‘Butchers created a new market. The two charismatic vegans managed to surprise all the shoppers who came to the market for watermelons and sweet corn, by offering them a taste of something they would never, ever seek out in a grocery store.

“Just try it, I’d say. Most are skeptical until they taste it. Everyone will taste it, if only to confirm their love of meat. But we surprise them” said Kale, or as Aubry called him, “The Sample Master.”

Once the meat was winning hearts and stomachs at the market, the duo launched a kickstarter, knocked it out of the park, and then opened the quirky, warm little storefront they now run in North East Minneapolis. 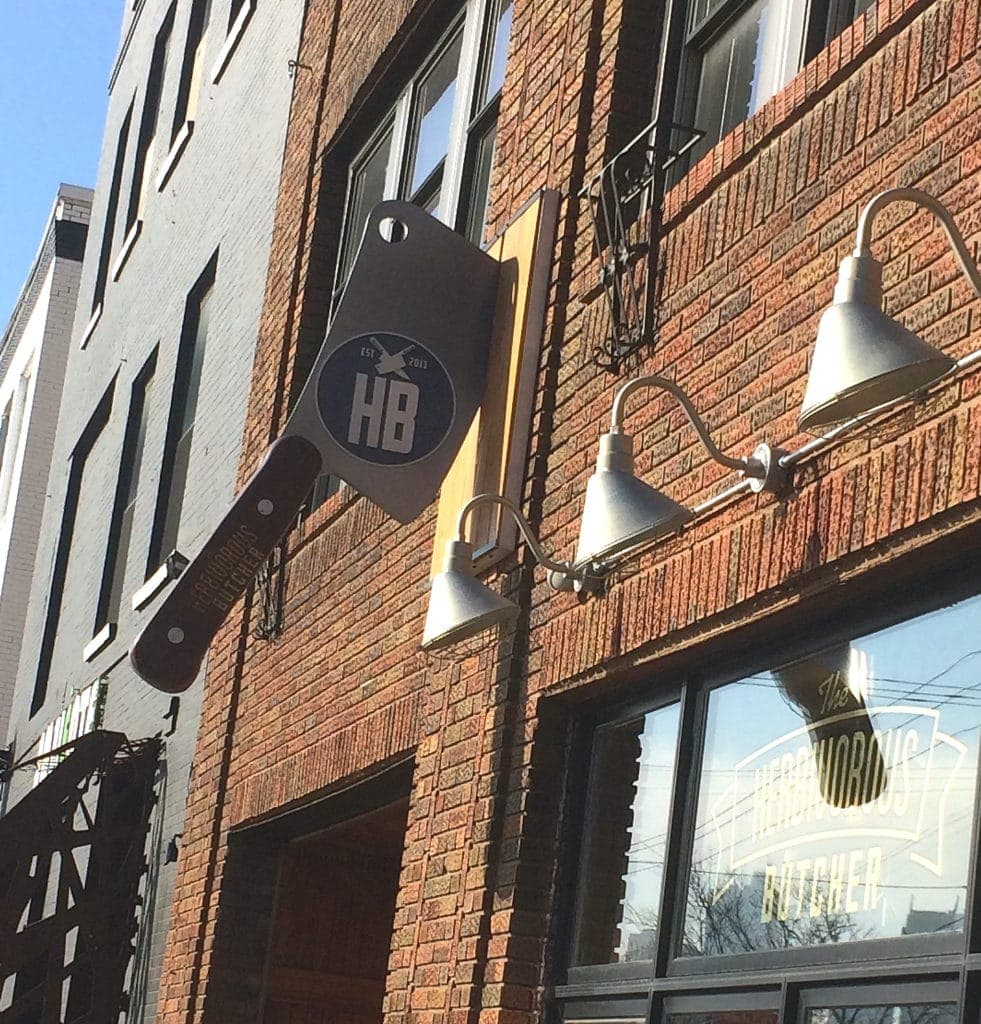 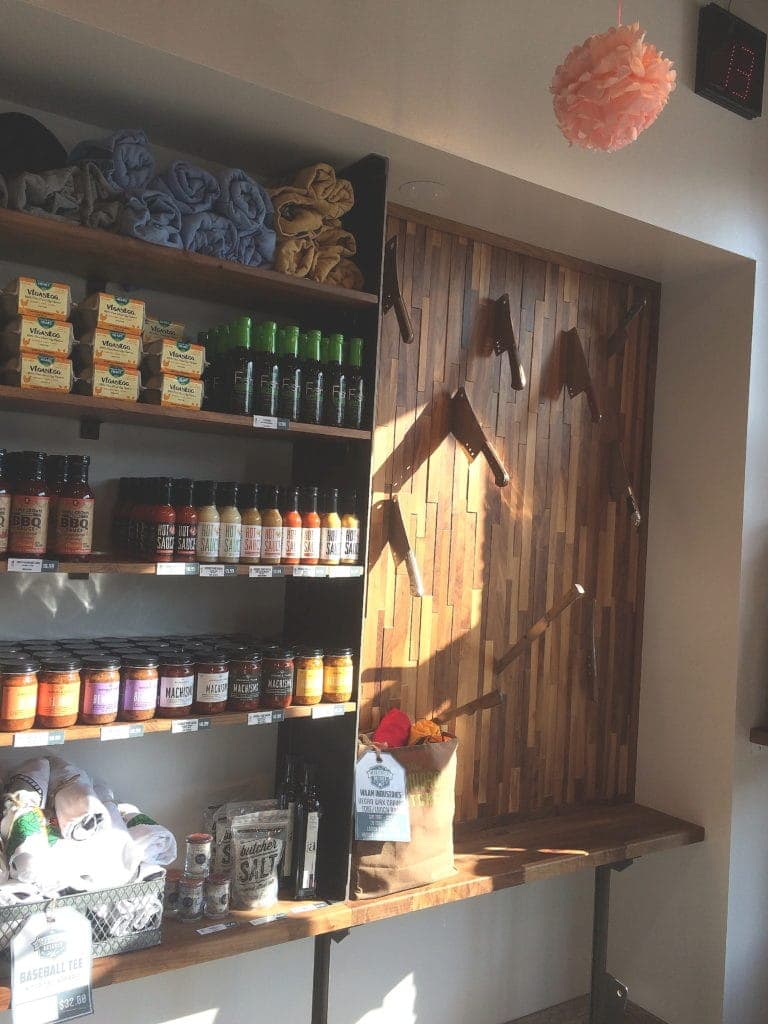 There’s a Cleaver Motif in the Shop

The shop, nestled in between a number of meat-centric restaurants, presents itself like the kind of butcher shop you might find in Mayberry RFD – with a touch of hipness. “It feels like an old-fashioned butcher shop, maybe it’s a familiar feeling for people who have been there. You can order by the pound, you can taste the sliced meats.” said Kale.

The meats are designed to appeal to omnivores crossing over, not die hard vegans, who may find their resemblance to animal foods off-putting. “60% of our customers are omnivores coming in to either try to switch, or because a friend or family member who’s vegan is coming over. Then they try it and like it.” Said Kale. “They’re not for vegans who don’t want it.”

Because the meats are seasoned, sauced and completely cooked, all you have to do is insert them into your familiar foods,as I did with my Banh Mie recipe. “For the most part you can directly swap them out for your favorite meat. And never worry about cooking the bacteria out of your food.” said Aubry.

The ‘Butchers also make non-dairy cheeses, and they sell the Punk Rawk cashewmilk cheeses made in Minneapolis, I wrote about here. They sell a few select sandwiches, all modeled on the kind of over the top deli sandwiches you’d see in a Dagwood cartoon. Stacked with sliced meats, cheeses,and delectable toppings, the sandwiches made Guy Fieri roll his eyes with bliss, and he’s eaten a few big fat sandwiches in his day. 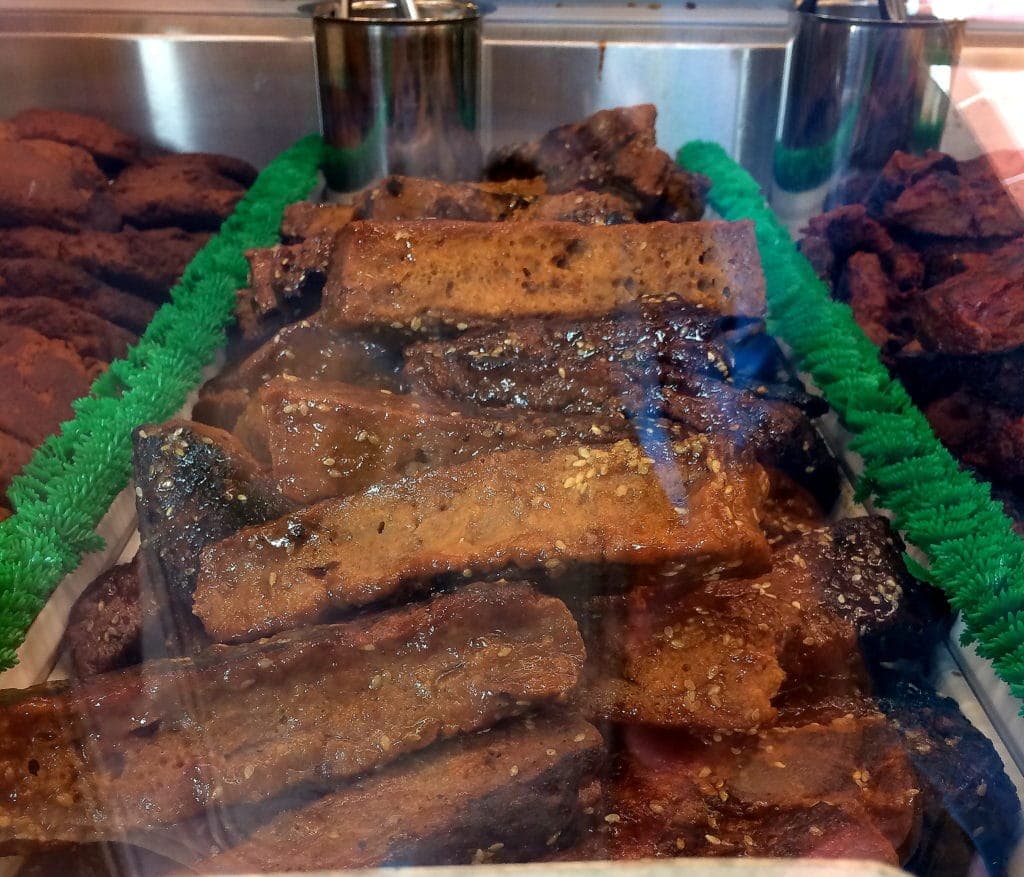 Korean Ribs in The Case (Pardon the reflections)

Behind the case is the kitchen, where the happy sausage makers mix, form and cook all the meats.Here’s a glimpse of some roasts being shaped: 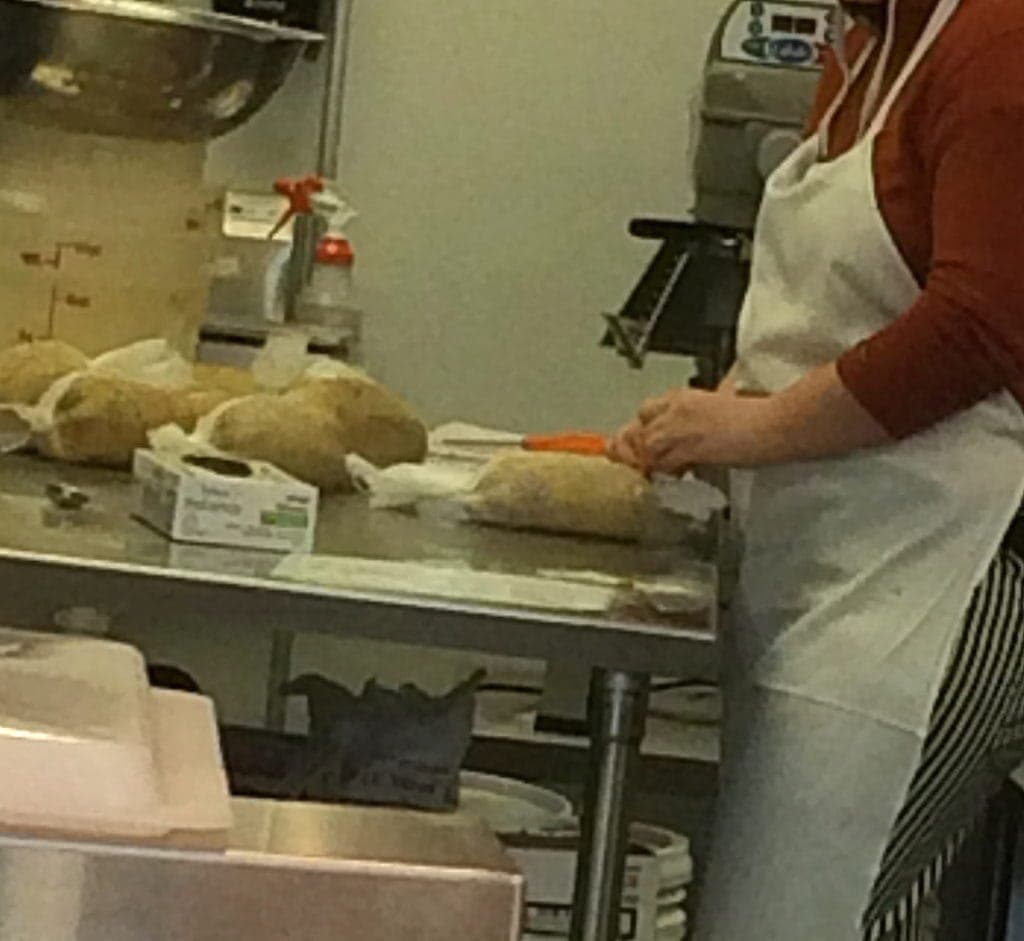 The ‘Butchers call themselves a “savory bakery,” because they are basically kneading doughs and then baking or steaming them. They have branched out into some jackfruit-based products too, which can meet the needs of the gluten free vegans as well as the curious omnivores who miss pulled pork.

So, if you don’t live in Minneapolis and want to give the HB products a try, order them here. If you do live nearby, the shop is worth a trip.

And you can bet that there will be more outposts of the Herbivorous Butcher, coming soon. 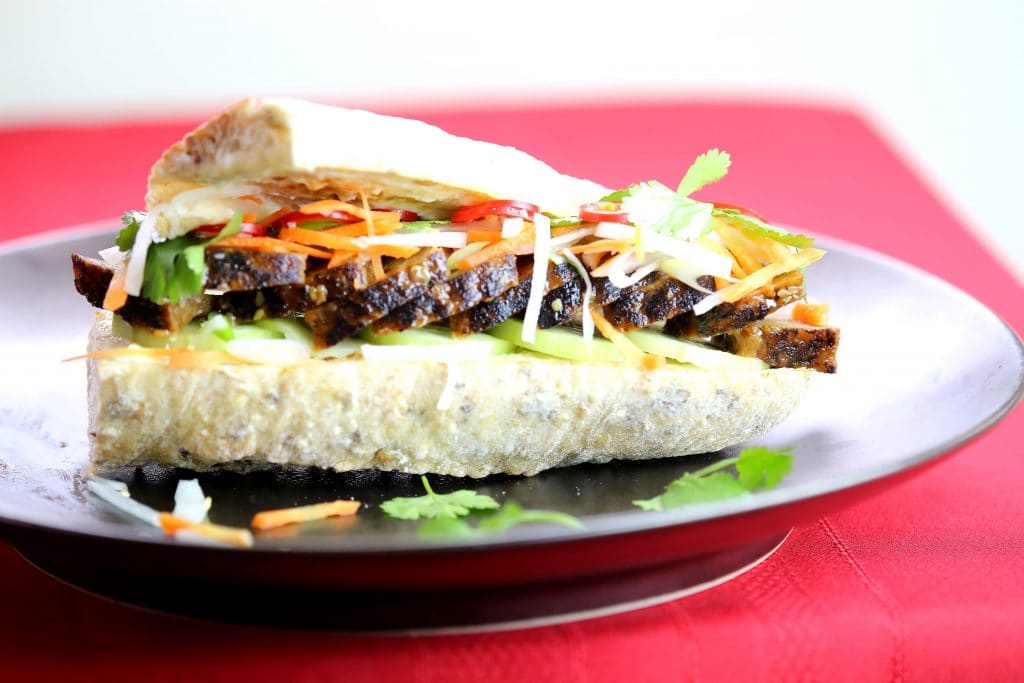 Preheat the broiler. Split the baguette into halves and then slice each for a sandwich. Open the baguette piece and spread with mayo. Wait to broil until the rest of the sandwich parts are ready to go.
In a small bowl, combine the daikon, carrot, sugar, rice vinegar and salt. Let stand for about 10 minutes.
Slice the “ribs” into thin pieces and warm them in a pan on the stove, or microwave.
Slice the chilis, pluck the cilantro leaves, and sliver the scallions.
When all is ready, broil the baguettes until the may is bubbly and browned in spots. Place each on a plate and layer on cucumber, ribs, some of the daikon mixture, the cilantro, chilis and scallions. Put the top slice of bread on and serve immediately.