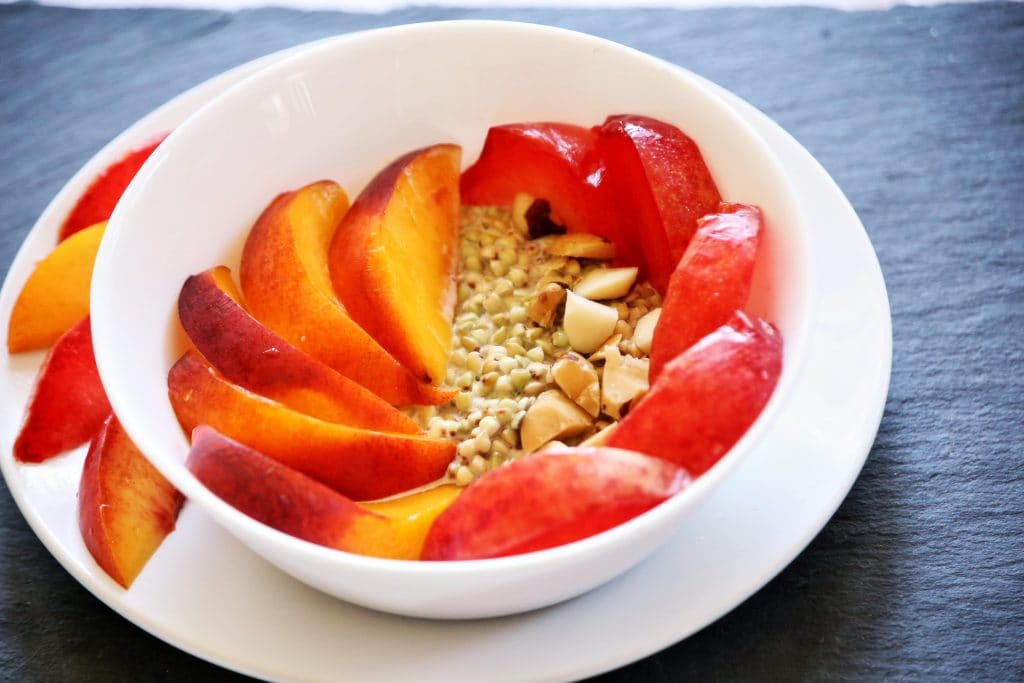 Have you ever had two separate experiences, and as they percolated in your mind, the combination inspired something else entirely? That’s exactly what happened to me at last month’s Grain Gathering, and my inspiration was buckwheat.

As I wrote last week, at the Grain Gathering I toured an experimental grain field, planted with plots of wheat, buckwheat, and barley. Along with the dramatic purple barley, paradigm shifting perennial wheat, and heritage grains, were these gorgeous flowers. 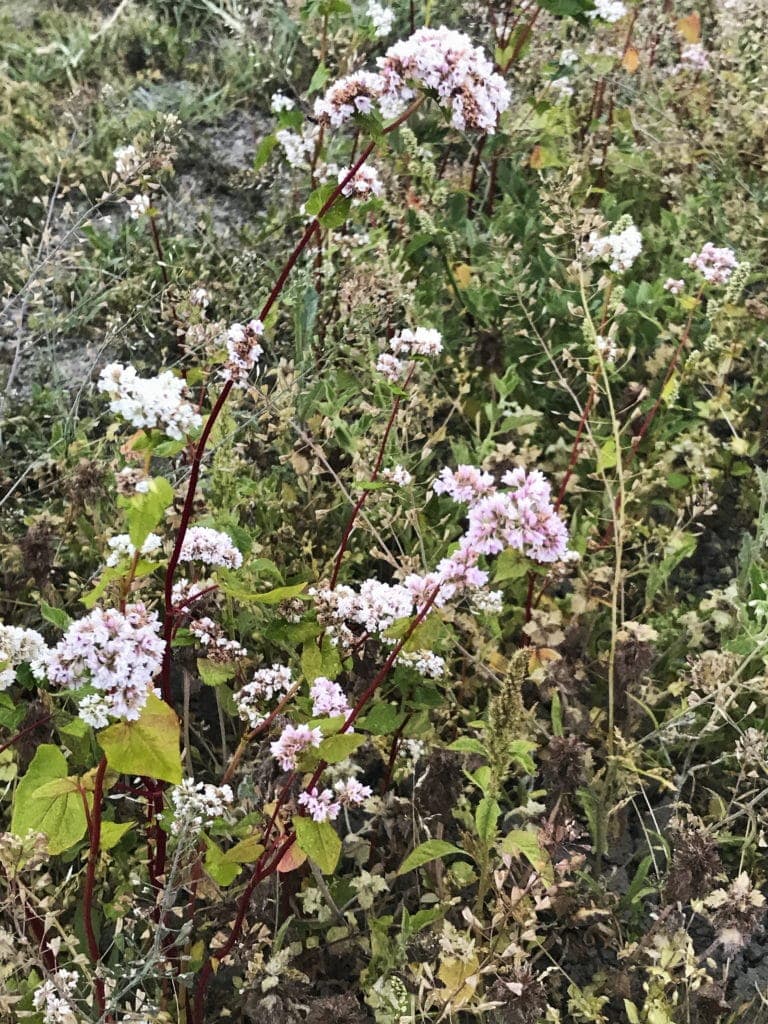 I thought I knew what buckwheat looked like, but it turns out, I didn’t. Those lovely pink flowers will mature into perfect little three sided pyramid-shaped seeds, each wrapped in a black, papery hull. Unlike wheat and barley, whose seeds line up evenly along a central stem, these hang in little clusters, and must be harder to harvest because of it.

The Buckwheat that I was admiring turns out to be a variety from Bhutan, which is one of 120 buckwheats from 19 countries, all grown there for breeding diversity. Dr Steven Jones was giving the tour, but he made sure to give a shout out to the women behind the buckwheat. “Bethany Econopouly and Kim Binczewski are doing the work on buckwheat. Bethany is looking at flavor, color, and early maturity.” Econopouloly is a PhD student at WSU studying with Jones, and Binczewski is the lab manager, among her many jobs.

Buckwheat has long been on my list of grains that should rise again. Buckwheat thrives in poor soil and cold climates, needs no nitrogen fertilizers, and matures quickly, allowing farmers to plant a crop after harvesting another, for a fast turnaround before winter sets in. In the early 1900’s US farmers planted a million acres of buckwheat, but now only 50,000. It’s still big in Russia, where toasted buckwheat kasha is a traditional dish.

We would do well to start filling in between crops with buckwheat, if only for the honey. ” Buckwheat is great for the soil, the bees and us.” said Jones. Those pretty flowers attract honeybees, who make a deeply flavorful honey from the pollen. I recommend trying it drizzled over your breakfast!

Chances are, you’ve only had buckwheat in pancakes. I love buckwheat cakes, too, but there is so much more to buckwheat. Those perfect little pyramids have a nutty, mildly minerally flavor, and a nuttiness that really comes out when toasted or baked.Unlike some whole grain groats, the bran layer softens quite a bit in cooking, and the grain can become soft and sticky, if you want it to.

But that brings me back to the two events that came together as one. You see, after my jaunt to the buckwheat field, I came back to the Bread Lab to attend some seminars. One I stopped into for a few moments was about making Muesli. The man behind the Mock Mill, Wolfgang Mock, was leading a group in making muesli from freshly flaked whole oats. 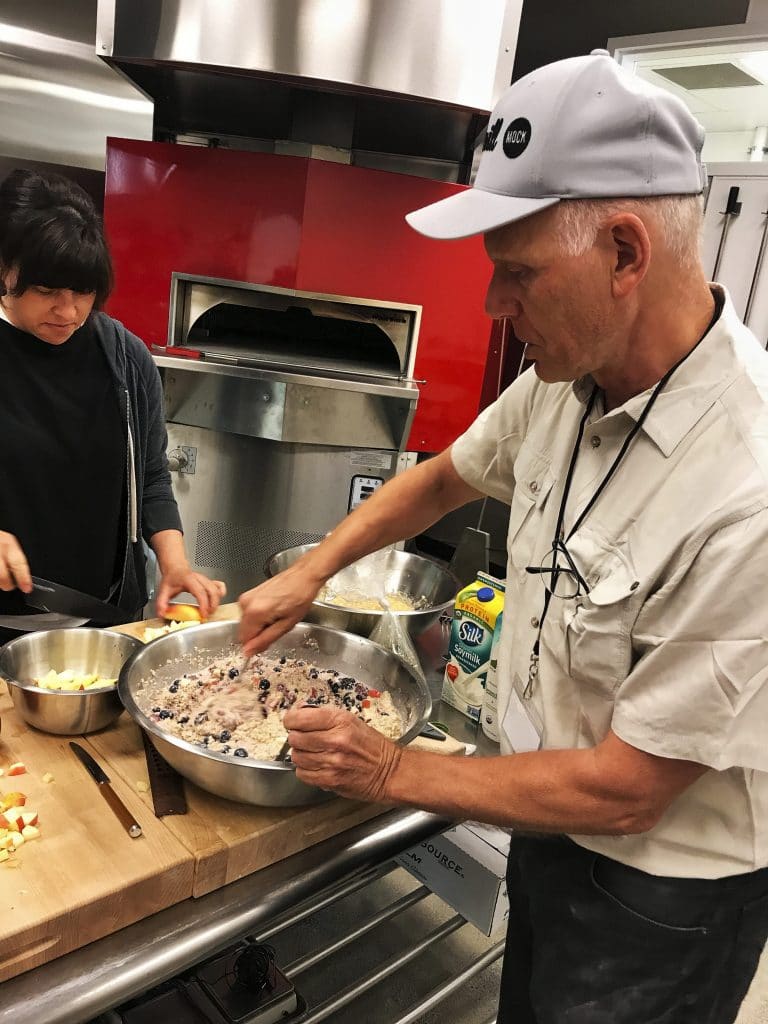 As he demonstrated his recipe, Mock began to extol the health benefits of one of his favorite add-ins, the Brazil nut. “One a day gives you all the selenium you need, ” he said, with infectious enthusiasm. ” If your selenium is low, they tell you to take supplements, but the supplements are made from Brazil nuts. Just eat the nuts!”

But even more intriguing, they both taste nutty and sweet, and are good raw. So I made an easy overnight soak of the buckwheat, mixed with soy milk and a little water. It softened the grain enough to make it easy enough to chew, but still entertainingly crunchy. You could certainly add other stuff to your soak, from frozen berries to pomegranate juice, or chia seeds and cinnamon.

The one thing to know is that the milk will be thickened and a little stringy-looking, but it didn’t bother me a bit. If you want a smoother porridge, just buzz it for a few seconds in the blender.

So here’s to a rebirth of buckwheat in the popular consciousness. 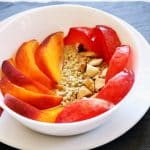 Try the amazing flavor and texture of buckwheat in this easy overnight soak, and it may just take away some of that post-exercise soreness, as a bonus.
Prep Time 5 minutes
Servings 3
Author Robin Asbell