When Peaches Ripen, Make a Peach and Berry Crisp

Oh July, you have won my heart a hundred times over. Yes, you were steamy in spots, but we managed to romance each other relentlessly. Of course, July includes a trip to Illinois, where I pick up my annual peach harvest. You may not have heard about the epic peaches of Calhoun County, but they are worth a trip. And a Peach and Berry Crisp is just one of the delicious results. 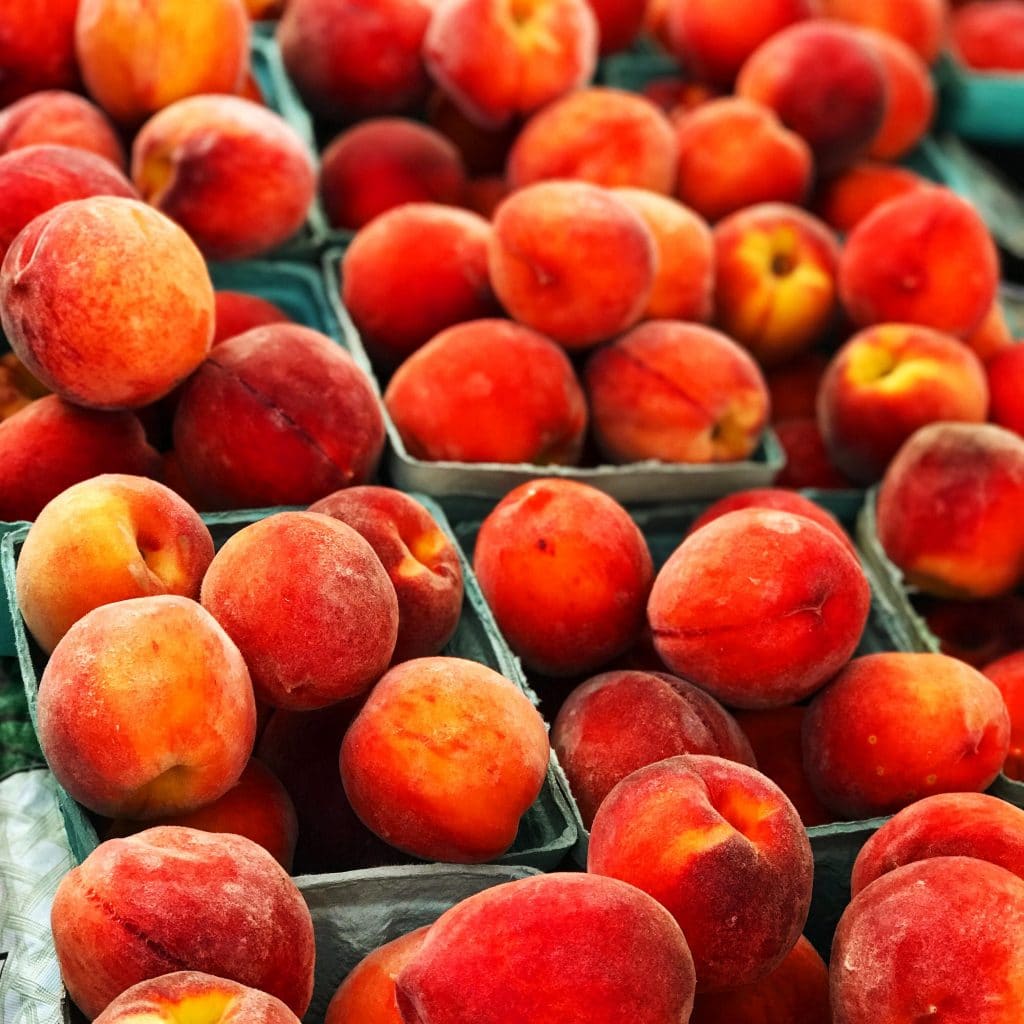 We moved to Jacksonville, IL, when I was in high school. Somehow in the haze of memory, I still have vivid memories of discovering the local peaches. They are such a local favorite that back then, when there wasn’t an organized farmer’s market, there was a stand on the corner of the gas station lot, selling peaches. “Peaches at the gas station,” I said to my boyfriend, “really?” “Oh yeah, let’s get some,” he said, and we embarked on a peach based diet for the rest of the summer.

At least that is what I remember. The intensity of the peach flavor, the juice running down my chin, coating my hands and wrists, as we sat on a picnic table in the park, was unforgettable.

So, when I go home to visit, I try to time it to sync with the peach harvest, and take a little nostalgic revel with the peaches. With a peach and berry crisp. 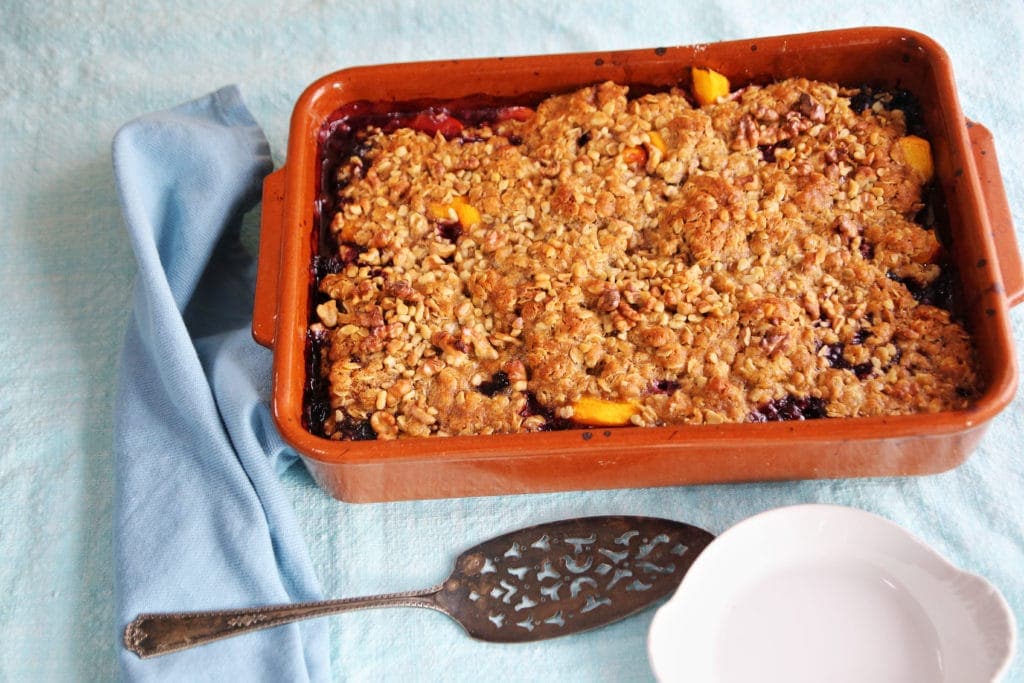 Now let me say, I know that you probably have a peach that you think bests all other peaches by a mile. I’m not here to fight about it. In fact, I’m happy that you have a local peach, if you are so lucky, that gives you the kind of ecstatic response that these give me.

There’s even a bit of a political scrap over the best peaches.

Of course, the peach season is also the hottest season of the year, and it’s a sacrifice to turn the oven on for too long. I still practice my Illinois strategy, of early morning baking. So, I got up early, cranked the oven, and proceeded to peel and slice peaches into a baking dish. These are old school peaches, kind of small, very fuzzy, a little hard to peel.

But they are worth it. 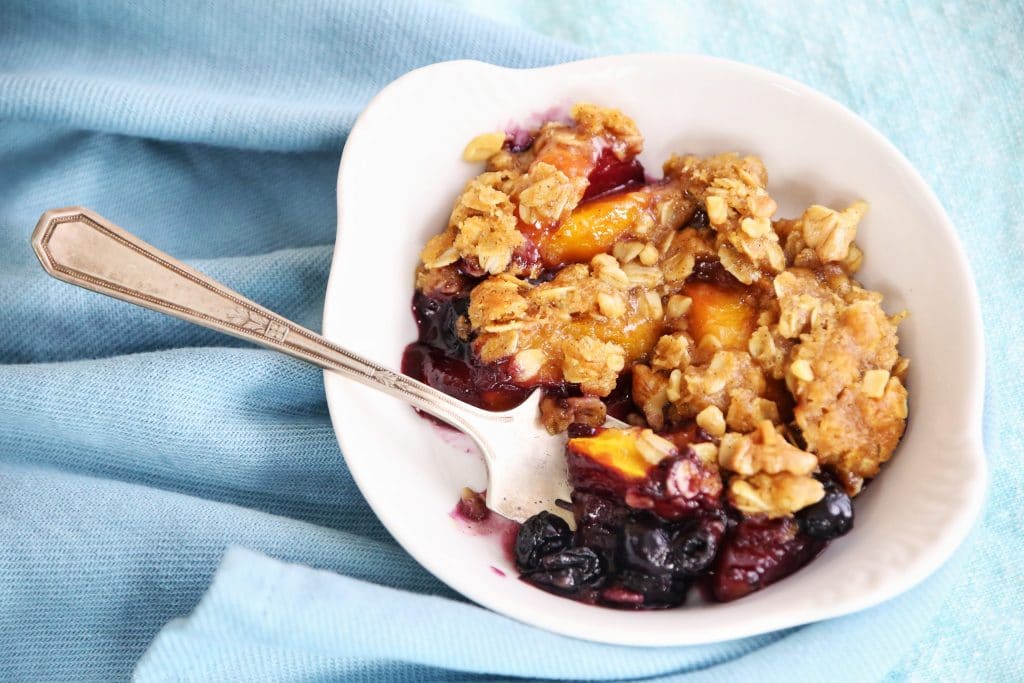 A Bowl of Simple Joy

In the infinite bounty of the season, we also had our choice of blackberries and blueberries at the farmer’s market, so I added them to the crisp. 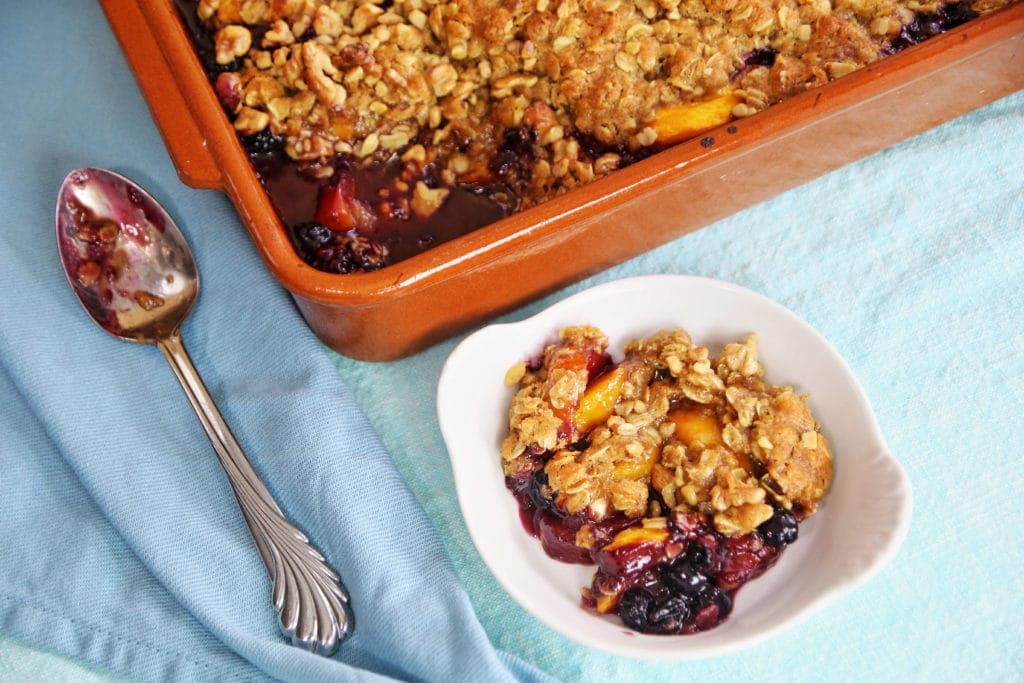 Because for a moment, the peaches can take you out of time and place. A mouthful of nature’s perfection isn’t in the here and now, it’s timeless.

Forget your problems, and taste the peach. 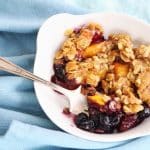 When peaches are at their juicy peak, you just need a simple way to show them off.
Servings 6
Author Robin Asbell