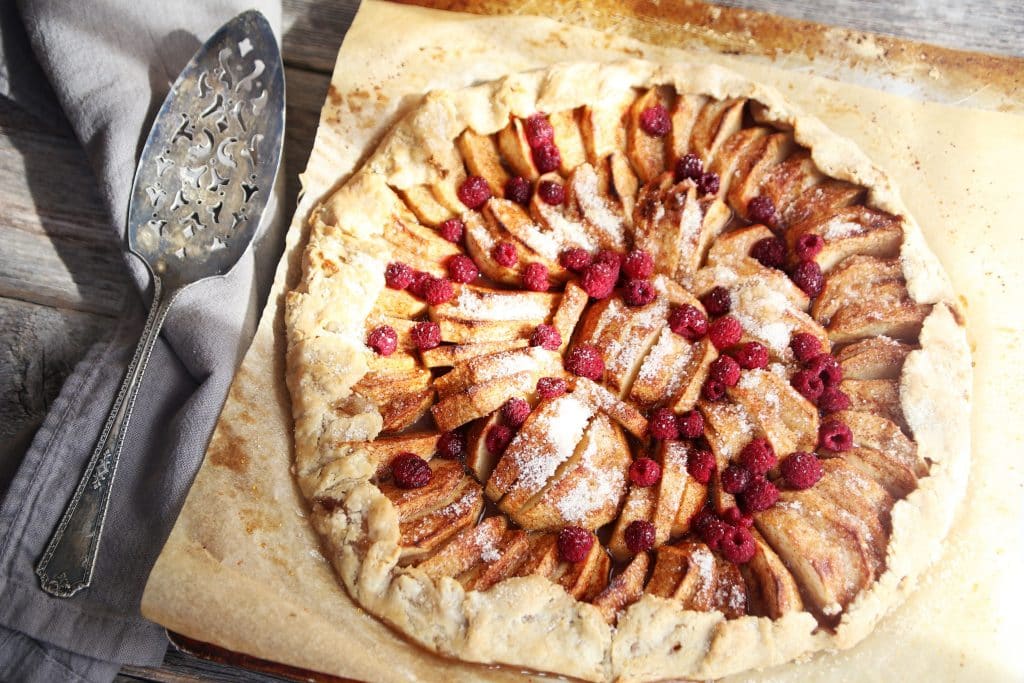 At the farmer’s market last weekend, as I shivered in the 40 degree air, I marveled at the bounty of vegetables that the end of September brings. Summery sweet corn and tomatoes were there, alongside Fall-ish squash and apples. Strikingly, there was an abundant harvest of raspberries, as well. I knew right away that I would have to make an Apple Raspberry Galette.

I used to grow raspberries in my yard, but their aggressive ways were just too much. The spiny canes spread by sending runner roots out just under the surface of the lawn, and removing them requires heavy gloves and a shovel. I wanted to go back to loving raspberries, not resenting them, so we dug them up and gave the plants to a friend. And now I buy beautiful raspberries from my local farmer!

The apple raspberry galette is so much easier and quicker to make than a pie, I hope you’ll try making it. The balance of crust to filling is about 50/50, so the pastry must be flaky and delicious. The fanned sliced apples give it real curb appeal, and they bake so much more quickly than a deep dish- 40 minutes of oven time, I promise.

Or try one of these apple recipes: 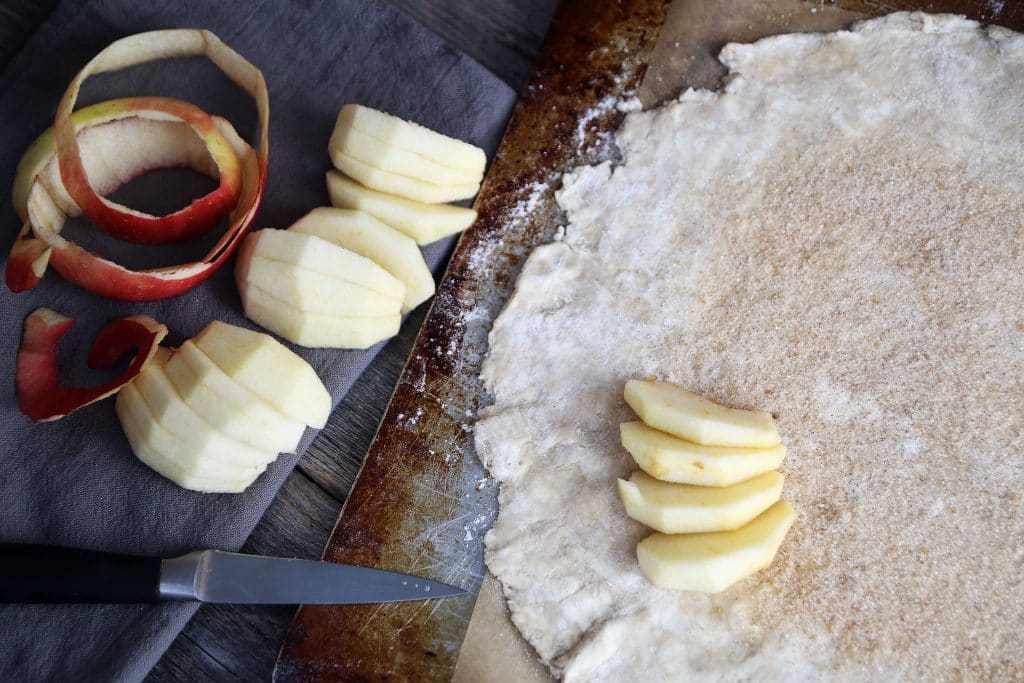 Start on the outside row and work your way in

If you get some practice in peeling and slicing apples, you can get fast at it. I just slice them and put them right on there, none of the bowl of lemony water some recipes advise. 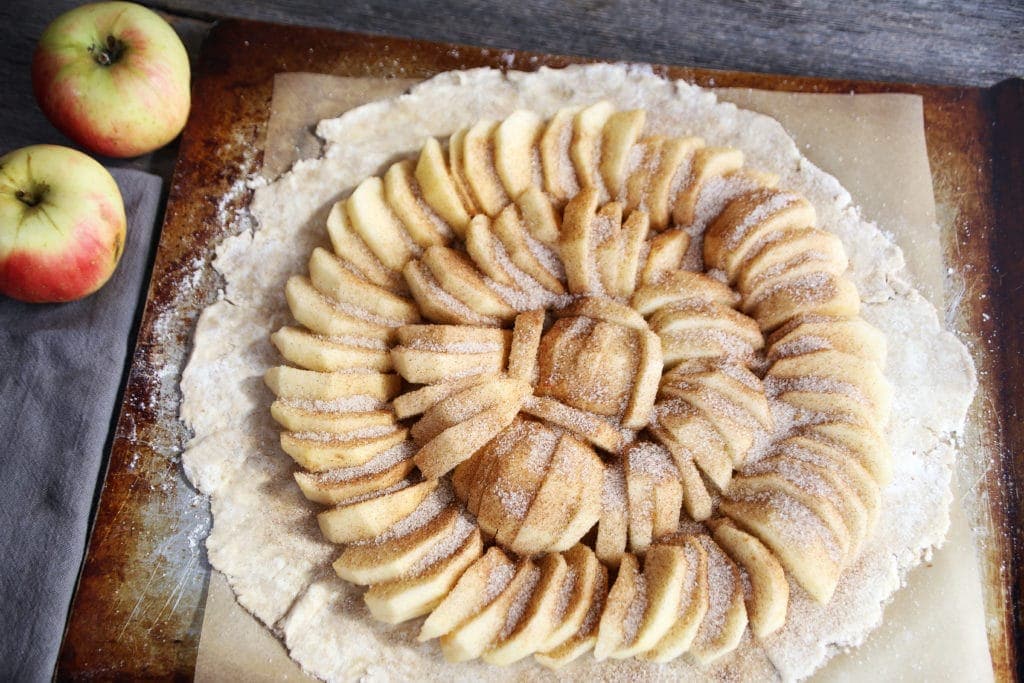 For my crust, I went with a locally produced, freshly ground flour from Baker’s Field Flour and Bread. I love their products and can buy it at my Coop. If you don’t have a source for a fresh, soft wheat flour, you can use whole wheat pastry or white whole wheat. I’ve been playing around with some Melt brand buttery sticks, they seem to work well in pastry. I would have done my usual coconut oil if not. If you are into butter, use organic, grass fed butter for this.

If you didn’t see my apple segment on Twin Cites Live Last week, scroll down the page to click on the link. I was on just before an apple breeder from the University of Minnesota, James Luby, who concurred with me in my choice of Zestar for my crisp. It’s taken me a while to stop automatically reaching for Granny Smiths, but the Zestar is pretty wonderful in pies, and this galette. 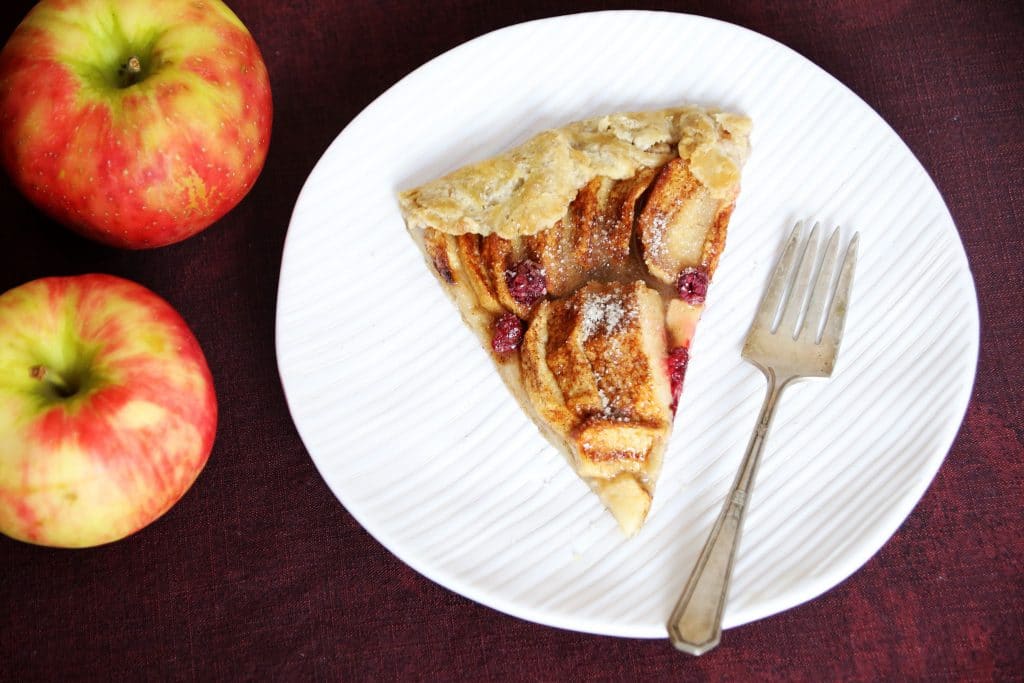 Just a simple wedge of galette, it needs no adornment.

The only thickener in the galette is a sprinkle of flour under the apples, and the chunky sugar. The sugar melts and becomes a thick syrup, so it is not a pie that you can keep for more than day without the crust becoming soggy.

So seize the season and make an Apple Raspberry Galette for tonight’s dessert, and go ahead and finish it off for breakfast the next day! 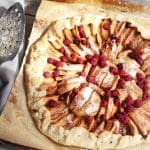 Save time and celebrate the harvest with an easy galette. It's really not as hard as it looks!
Course Dessert
Servings 8
Author Robin Asbell