If you think of your slow cooker as a tool to drag out in the depths of winter, just for slow-simmered stews and bean pots, you are not alone. You’re also missing out on the many ways that the cooker can make your life easier. It’s time you discovered slow cooker baking. You may even start slow cooker baking on the hottest days of summer, with this recipe for Whole Wheat Chia Buns.

If you think about it, the slow cooker is a free-standing, heavy ceramic mini-oven. Plug it in, and the ceramic pot heats slowly, like the ceramic tiles on the bottom of a bread or pizza oven. The lid is the oven door, sealing in the heat. The big difference is the size, and the fact that the lid is much more air-tight than your oven. But you get my point. It’s an oven.

The Slow Cooker is a Bread Oven

One of the most appealing things you can serve on the side of a meal is a warm, freshly baked bun. Especially when you are serving a soup or stew, with lots of juicy broth and sauce to mop up. These buns are fluffy and light, even though they are made from 100 % whole grain flour. That’s because white whole wheat flour is a little lighter, and because of the slow heat of the crockpot warming under the buns. They are also “no-knead” buns, because they don’t really need to develop much gluten. Nestled together in the pot, they have nowhere to go but up, and they have enough structure to form an airy, open crumb.

One slight drawback of baking in the slow-cooker is that it doesn’t give your buns that golden brown top you have come to expect. I solved that by rolling the buns in seeds, concealing the paleness underneath, and giving them plenty of crunch. The chia also adds a little nutrient dense plan-food goodness.

Yes You Can Bake on a Weeknight

So, thanks to an appliance with “slow” literally in its name, you can have buns fast. I’ll take my humor where I can get it, and when I have an hour and 45 minutes, I can have some quick buns from slow cooker baking. 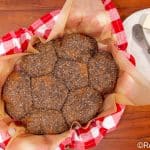 The slow cooker is surprisingly fast, when it comes to a yeasted bun. Put these little buns on to cook and they will rise and bake in 90 minutes.
Course Side Dish
Servings 8
Author Robin Asbell