Ask For the Vegan Menu at Amazing Thailand 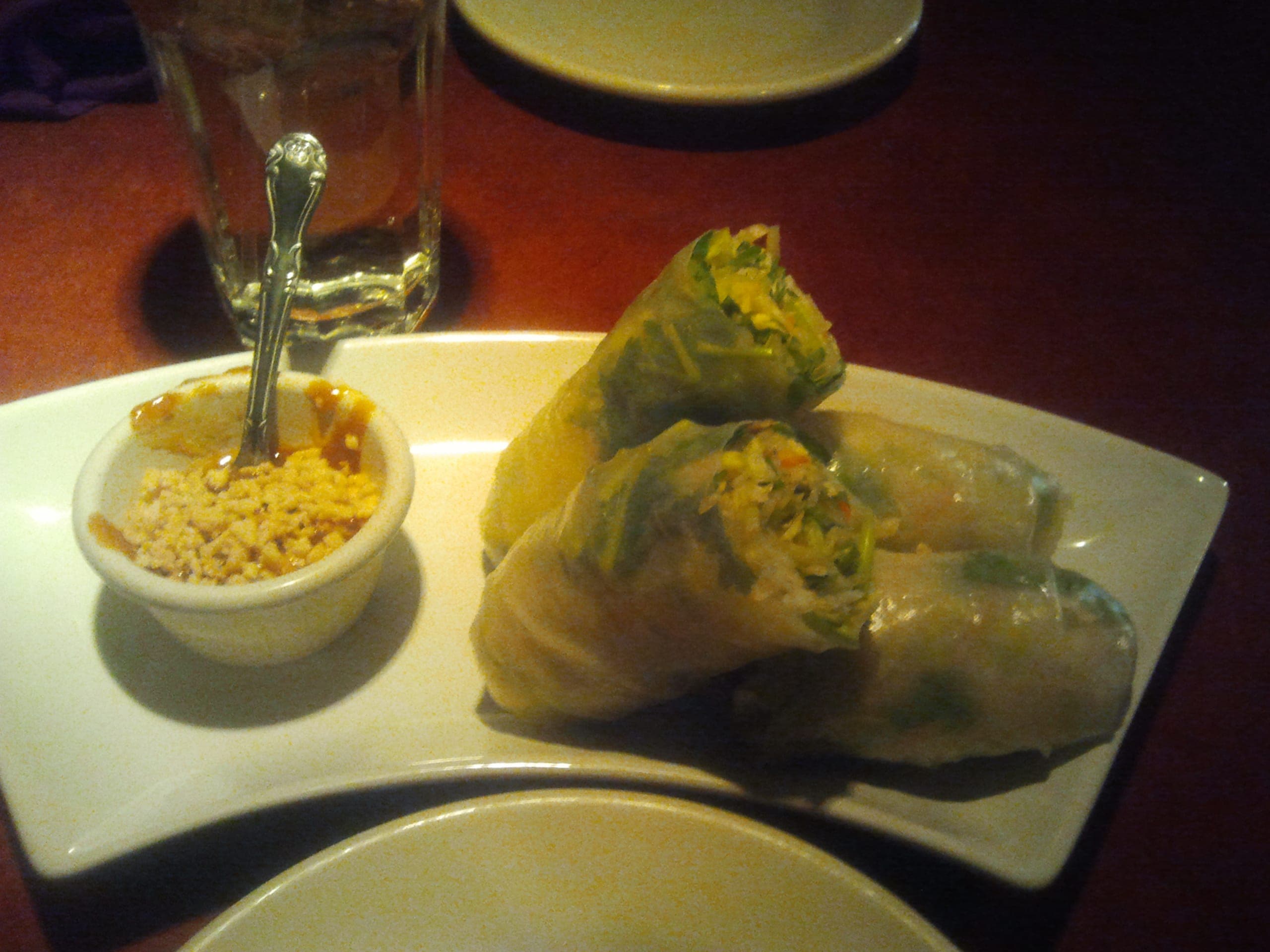 I love teaching cooking classes, for many reasons. One of the fun things is that the students often clue me in on restaurants that offer alternative menus. Since I do so much cooking at home, I am usually way behind the curve when it comes to restaurants, so it’s a huge help. This strange phenomenon of the secret special menu is really quite baffling; it’s as if restaurants don’t want the general public to think they are into vegans or something, or that they make weird gluten free food, so they keep it on the need-to-know basis. When I teach gluten-free, I always learn about some new places that are hiding a whole gluten-free menu behind the counter, that my hungry attendees have ferreted out and shared through the grapevine. This happened recently at a vegan class, when I heard a rumor that one of the better-reviewed Thai restaurants in Minneapolis had an actual Vegan Menu.

The restaurant, located in Uptown across from Calhoun Square, is called Amazing Thailand. It’s a nice place, with dark wood booths and interesting Thai wall decor. And a special, printed, laminated vegan menu, available on request. Awesome. And, in fairness, the vegan menu is on the website, if you can get it to open. But you don’t get it at the restaurant unless you ask.

They say that once you see something three times, it’s a trend, so I am calling it a trend. I dined in Bend Oregon in a Thai restaurant that had a vegan menu, and some years before, sampled vegan options on a menu in Eugene. Veganizing Thai food is not hard, really, so it makes sense. Vegans are already into eating tofu, mock duck, and all the peanuts you can sprinkle on top. Leaving out the fish sauce and eggs still leaves you with loads of flavor and texture.

So, just grab a Thai cookbook and take a look. If there is fish sauce, use soy sauce. Sugar? Vegan sugar or agave. Curry or shrimp pastes? Well, there are vegan curry pastes, Thai Kitchen is one that has no secret fishy ingredients. Shrimp pastes are basically used for their umami, and add salt, and often a dose of chiles. Try a dab of really dark miso instead, and adjust the heat. Eggs? Just whisk up some arrowroot and water to bind things like Pad Thai and thicken the sauce. Then, rely on the flavors of lime, chile, tamarind, palm sugar, soy sauce and coconut milk for a mouthful of Thai goodness. And don’t forget the peanuts. 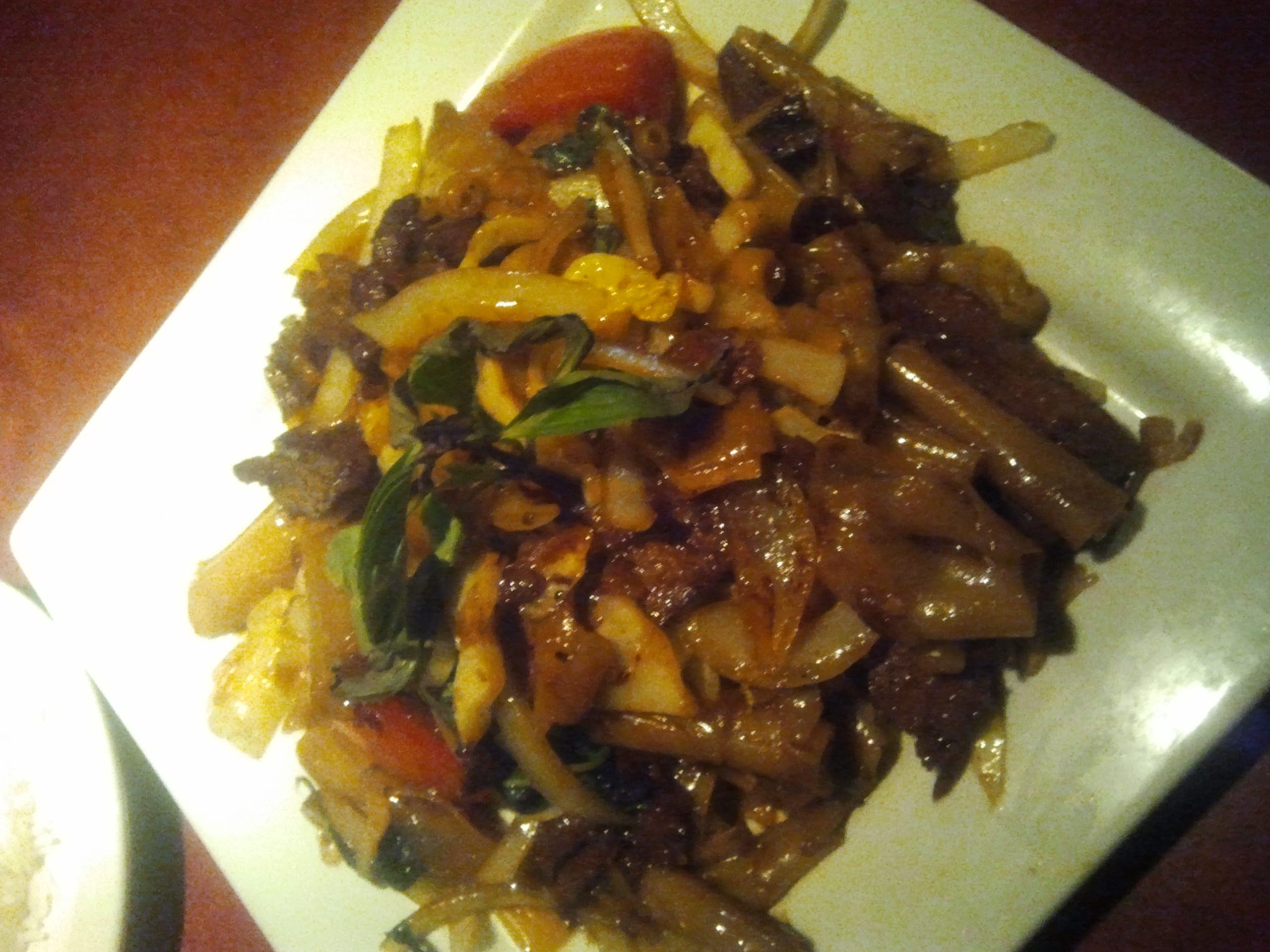 At Amazing Thailand, I had the vegetable springrolls, which were pretty much the usual thing. Rice noodles, lettuce, carrots, cilantro, in rice wraps with a sweet peanut sauce. I love those. It would be nice if they offered to throw some tofu in, but why quibble. Then I ordered “Spicy Noodles” with mock duck. The description just listed the veggies in it, so it was kind of a mystery. As you can see in the photo above, the noodles, which look like tubular pasta, were a stretchy rice sheet that had been rolled up and sliced in wide pieces, some of which unrolled, most did not. They were deliriously tender and elastic, and coated in a tangy, spicy sauce. Cabbage, spinach, tomatoes, onions and chiles were swimming alongside the mock duck, which seemed to have been coated with a blend of exotic spice, almost like five-spice. I got medium, which was pleasantly sinus-clearing hot.

The Vegan menu also offers a papaya salad, which can be vegan in Thai style, but my companion got Lao style which is only different in that it has fish sauce. Here is a picture of that. All accounts were that it was delicious. 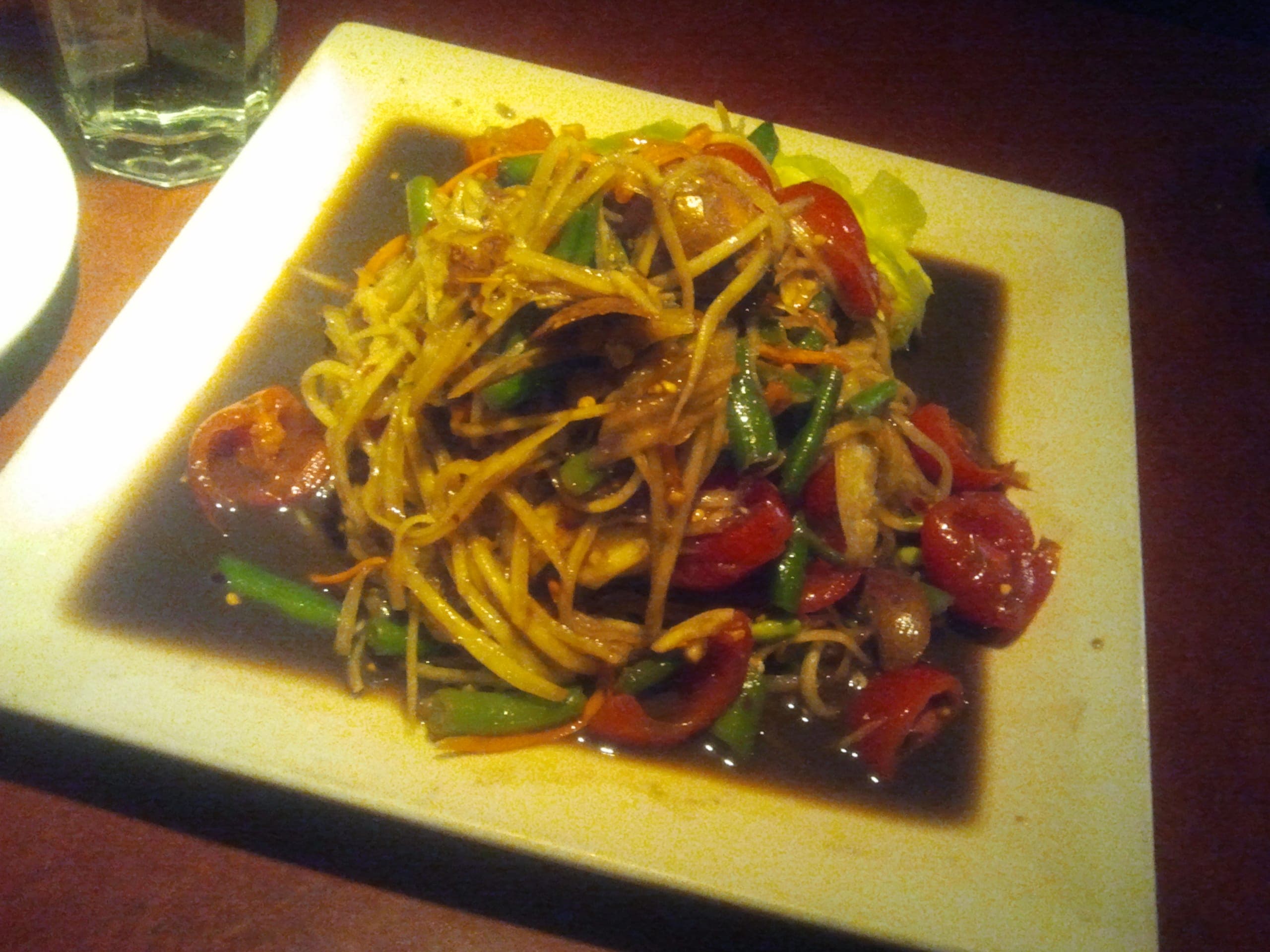 It’s interesting that with an under-served vegan market out there, hungry for dinner, so few restaurants are interested in selling them food. Take a trip to Either coast, and there will be actual all-vegan restaurants, as well as plentiful vegan options in other, good restaurants. Here in Minneapolis, we have only one totally vegan restaurant, Ecopolitan, which is also a raw restaurant.

It’s fine by me that places cater to both vegan and omnivorous customers. I get it that they are trying to keep everybody in the party happy, and stay in business. Still, vegans are out there. It’s not that hard to figure out how to make some really good vegan food, and print a menu. Praise to the enterprising restaurateurs who are making things just a little differently so that vegans can enjoy their cuisine.

Now if I only had more time to go out to eat, I could find all the secret menus.