Fresh Artisanal Pastas from Dumpling and Strand, with Squash Blossoms 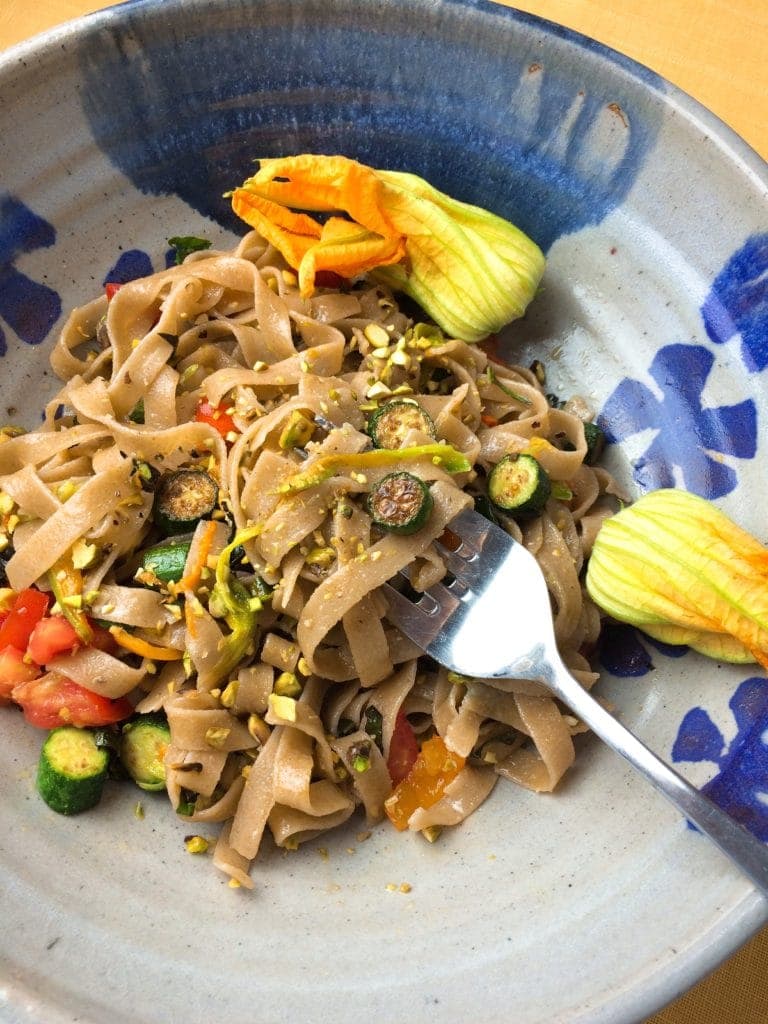 I rarely get that excited about a new product coming to market. Most of the time, it takes me months to get around to trying new things, in part because of my recipe testing queue. But fresh artisanal pastas might just get my attention.

Even as I am working on holiday recipes for December, the rebel on me wants to go to the farmer’s market and fill my basket with fleeting summer gems, like the first squash blossoms and heirloom tomatoes.

Nothing fits into that plan quite as well as a great fresh pasta, and I had been waiting for over  year to get to try “Dumping and Strand, Noodlers at Large” new line of artisanal pastas. That’s because I met the maker, Jeff Casper last year at the American Cereal Chemists International convention, where we were nerding out over whole grains.

It was clear that Casper was passionate about pasta, and had the background to make some amazing pasta and noodles.

“I spent 10 years doing product development work at General Mills.  Most of my time there was working in bakery and grain based foods.  While working in bread I began to seek out and learn from bakers such as Didier Rosada.  Only then did I really appreciate the amazing transformation of grains into incredible flavors by these master artisans.  That in turn led me to some culinary training at the Culinary Institute of America.  Later, I worked at a milling company and saw that many of these methods to develop flavor were not being applied to pasta, a food I have been making since I was a teenager.” said Casper.

He had my undivided attention when he told me of his plans to mill fresh, non-gmo flours, and to focus on bringing out the unique qualities of individual grains.

“Fresh whole grain flour tastes better: it is sweeter, more aromatic, and has a more complex flavor profile.  Our whole grain flours are ideally milled within a day or two of when we make our pasta.  The oils in whole grains are prone to oxidation, which in turn leads to an acrid bitterness and some cardboard-like off flavors.  This may be in part why many of the dried whole wheat pastas have a flat cardboard-like flavor.” he said.

He was even playing around with using levain, a pre-fermented starter often used to make traditional breads, as part of the pasta dough.

“I personally find many dried whole grain pastas underwhelming in flavor.  In bread, fermentation of grains awakens latent complex flavors that make whole grain flavor incredibly delicious.  Because of my disappointment with whole grain pasta, I was curious if some levain would help make a whole grain pasta stand out in a dish as an equal partner with other ingredients.  When I tasted some early versions with friends, some of them remarked that the pasta tasted like artisan bread- which made me happy because that is what the goal was.”

So of course, I was ready to eat a big plate full of this intriguing pasta then. I had to wait.

Well, I finally got my hands on the pasta at the Mill City Market. Take a look at the spread of oh-so-fresh noodle goodness. 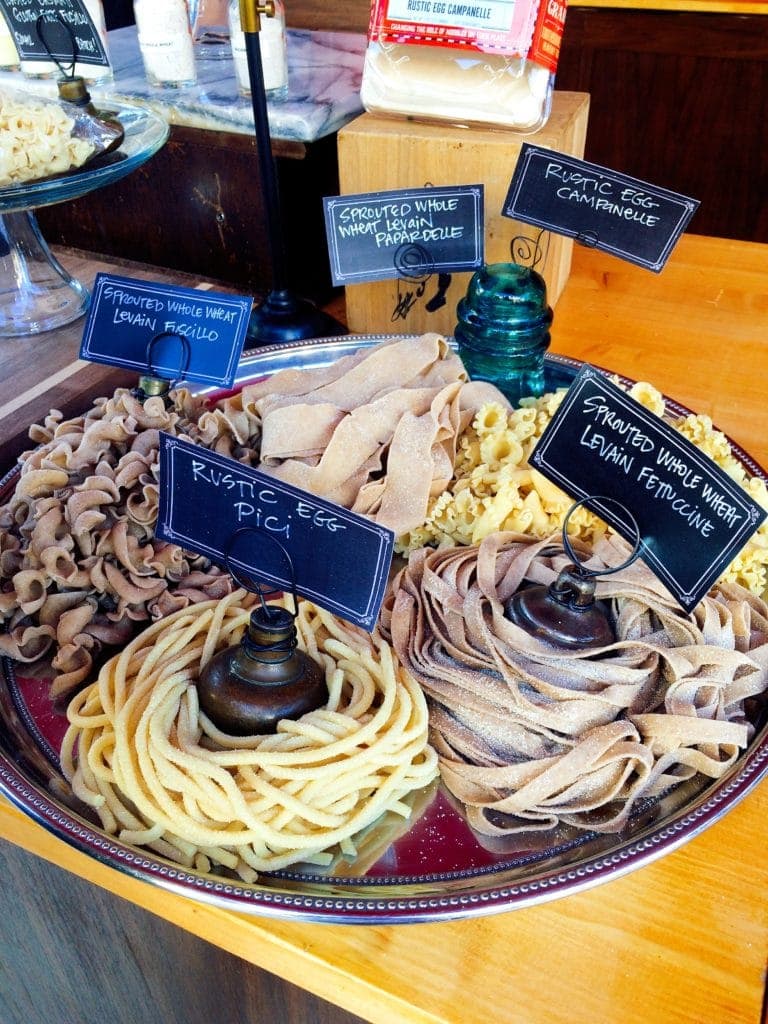 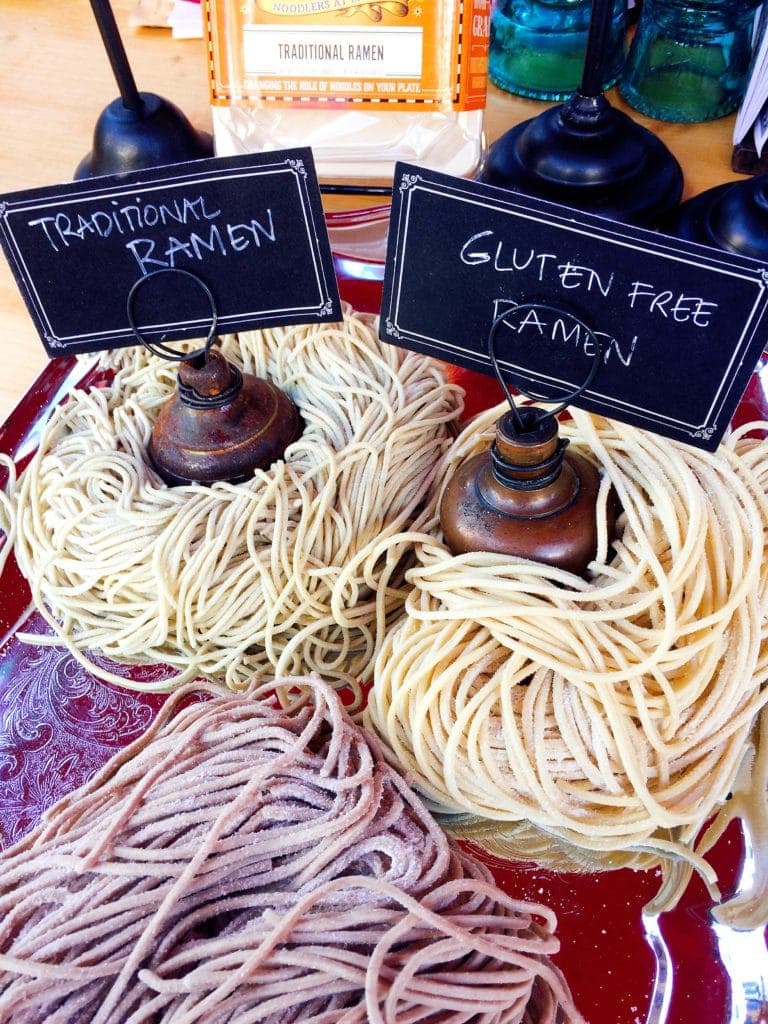 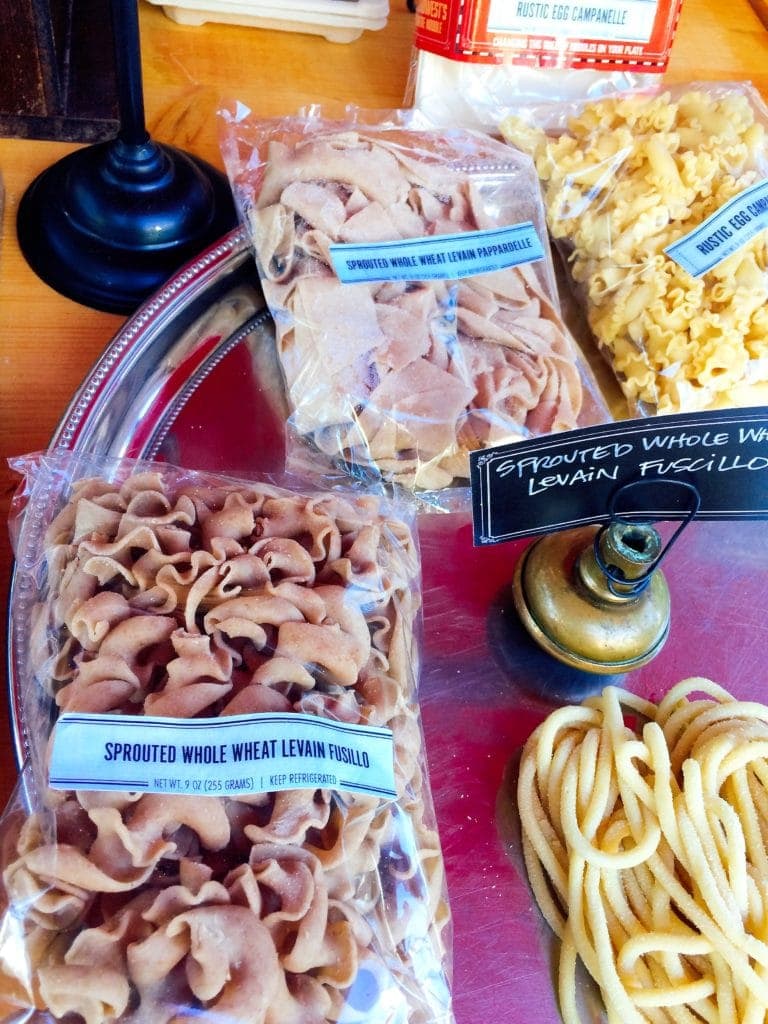 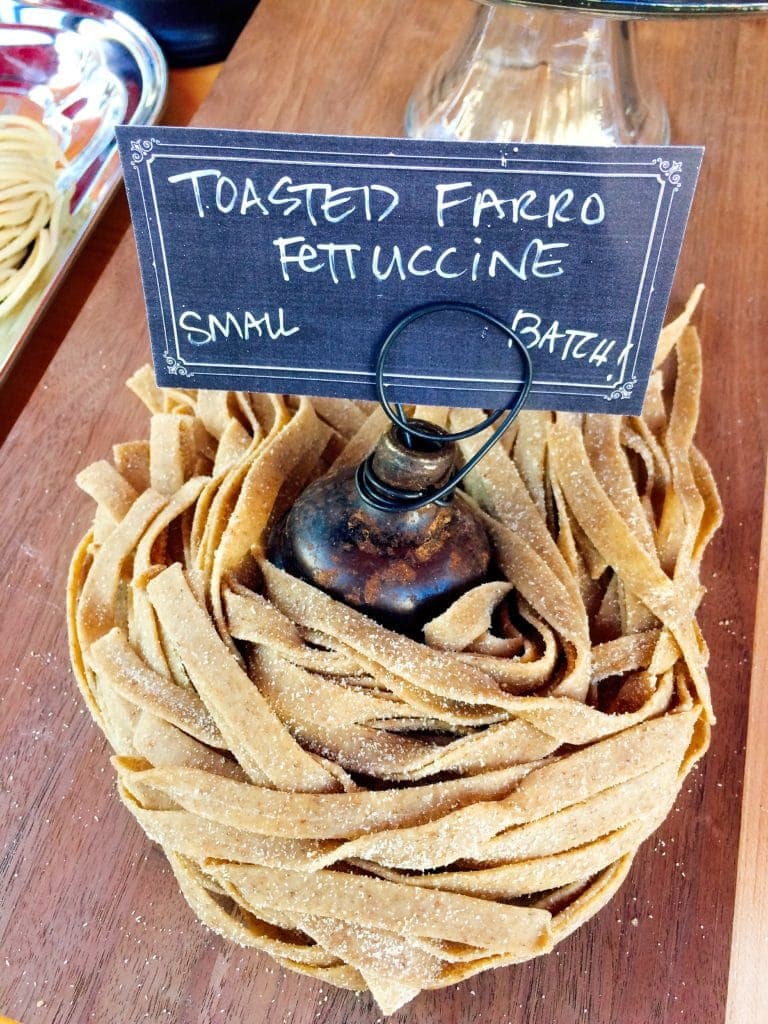 When most of us buy pasta made in factories that deal in millions of pounds of product, we get something very standardized and predictable. A smaller, artisan operation like Dumpling and Strand has the ability to be a little more spontaneous. If they feel like making a sprouted farro pasta one week, they can make a small batch, and print a few labels. No million dollar marketing campaign or re-tooling at the factory.

These pastas are breathtakingly good. Just contemplate all the varying thicknesses of the noodles, and the care that went into selecting the shapes of each one. The delicate pappardelle is just a whisper thinner than the toothsome fettucine, while the traditional ramen is a fine thread, next to the thicker buckwheat soba. They cook in 2-3 minutes, depending on the shape, and have textures that will have you throwing those supermarket boxes of macaroni in the trash.

I’ve been on a soapbox for years about whole wheat pasta. It’s gotten better, and most of them no longer dissolve into a gritty mush as soon as they are tender enough to eat. I’m happy to say that Dumpling and Strand have cracked the code. Taking a bite of these whole wheat pastas gives you a sensation of both weight and silkiness. Tender and supple, the fettucine didn’t break up after being tossed with the sauce, and had an appealing variegated color, as if there were a granular constellation within the noodle, spiked with barely visible bits of bran. There was a depth of flavor that must have come from the levain.

And gluten-free pasta? I did write a book about it, so I know just how tricky it is to get it right. I am thrilled to say that this toasted basmati rice version, with no dairy added, is excellent.

” I have several friends with celiac parents or kids and wanted to develop GF pastas that they felt good about buying their family members and could enjoy themselves even though they did not need GF.  This meant a product with the texture and flavor of a fresh wheat based pasta while providing some whole grain content.  Our formula contains an heirloom benne (low oil sesame) flour to help give a wheat-like note to the cooked flavor.  We also have a GF fresh ramen noodle and 100% Buckwheat Soba noodle that are GF.  We  have dedicated space and equipment for producing our GF pastas. We are working to get GFCO certified for these products in early fall. ”

I tossed my fusillo with a quick basil and almond pesto, and some fresh tomatoes. 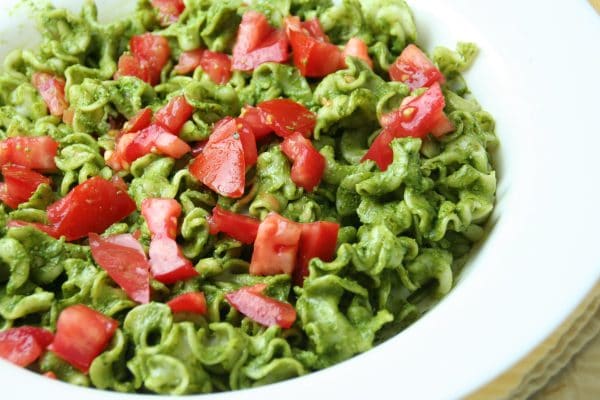 Gluten-free fusillo with pesto and tomatoes

To give the fettucine an appropriate, seasonal and local send off, I bought baby zucchini with blossoms attached, and opted to sear the crisp little zucchini in some hot olive oil. I sliced the blossoms and some vine-ripe red and yellow tomatoes, slivered some basil, and chopped some pistachios to play off the nutty taste of the pasta. 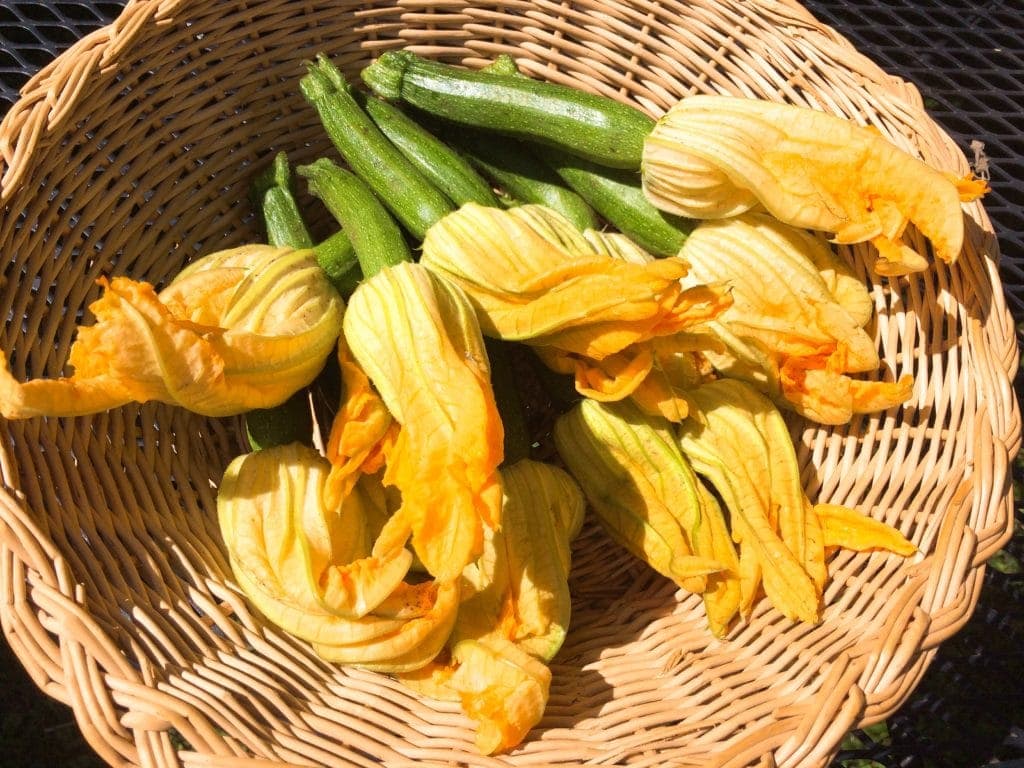 Squash blossoms are available for such a brief moment at the market, so I felt lucky to have gotten them for this dish. If you haven’t worked with them, just be careful to wash them well and pat dry, and remove the base of the flower and the stamens, which don’t taste all that great. 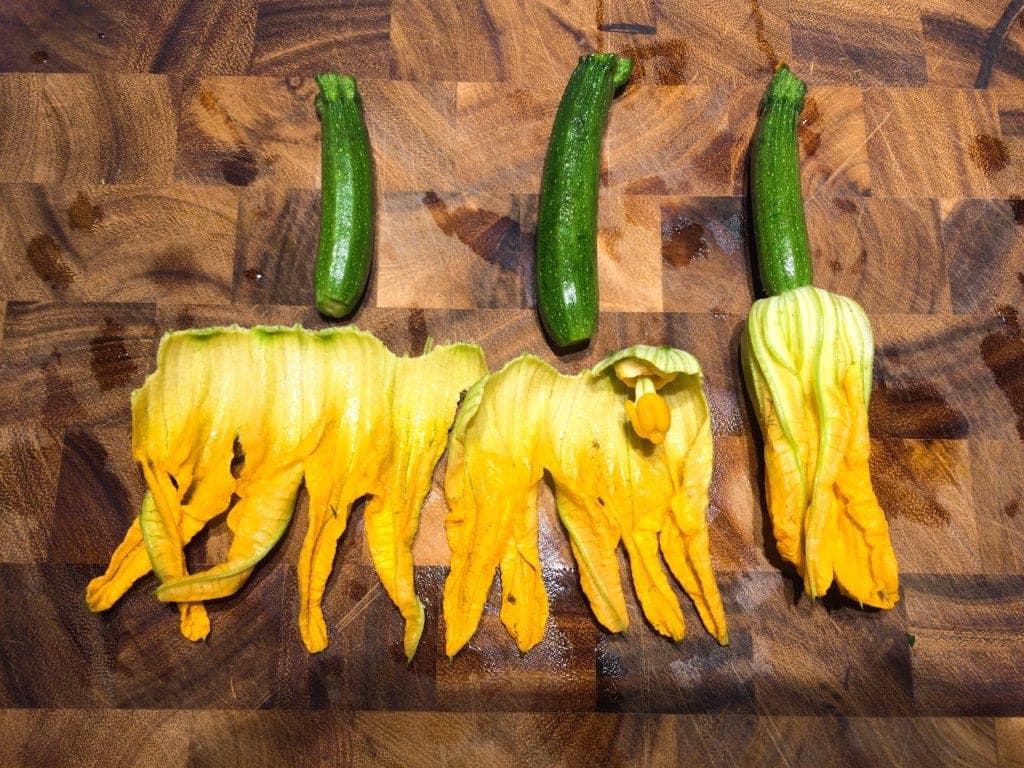 Sliver the tender flowers in strips, so that you can simply marinate them in olive oil and garlic, and toss with the pasta.

If you are able to make it to the Mill City, Kingfield or Linden Hills Farmer’s Markets, make a beeline to the Dumpling and Strand display. The “noodlers at large” are working at getting the pastas into stores in the area, as well.

As for me, I’m glad that good things come to those who wait!

1/4 cup shelled, unsalted pistachios (toasted or raw, whatever you can get)

a generous pinch or two of coarse salt

Put on a large pot of water to boil for the pasta, and salt it generously.

Chop the pistachios so that some are finely powdered, and some are in small chunks, reserve.

Snap the zucchini blossoms off the zucchini and soak them in a large bowl of cold water to remove dirt and ants, then drain. Open the flowers and remove the bases as shown in the photo above. Pat the blossoms dry and sliver, then put in a medium bowl. Add 3 tablespoons of the olive oil, the basil, garlic, tomatoes, zest and salt and toss to mix. Let stand while you prepare the zucchini and pasta.

Slice the zucchini. Place a large saute pan over high heat, and when hot, drizzle in the remaining tablespoon of olive oil. Let heat for a few seconds, then add the zucchini and sear for a minute before turning the slices. Sear the zucchini until browned on both sides.

Cook the pasta for about 2 minutes, then start testing, it may take 30 seconds or a minute more. Drain and quickly rinse with a splash of hot water. Drain well.

To the pan with the zucchini, add the squash blossom mixture and the hot pasta. Toss, and toss in half of the pistachios. Taste for salt.

Serve sprinkled with remaining pistachios and garnished with the remaining two squash blossoms. If desired, grate parmesan over each plate.