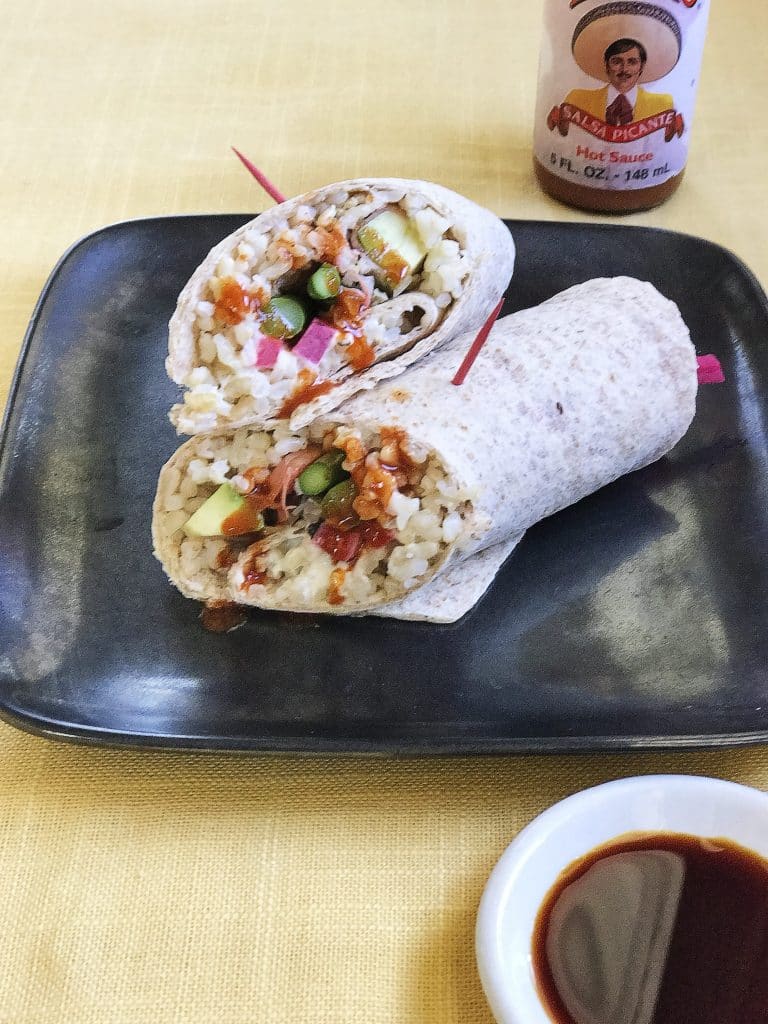 Fusion cooking had a heyday, back in the 90’s. It was all good until it went too far, until monstrous hybrid experiments roamed the land. We all tried to walk the line between cool-fusion and con-fusion food. Strange combos became all too common. Soon it became almost a pejorative to call something “fusion cuisine.”

In our current quest for cultural authenticity, it’s become even more of a sensitive topic. But dammit, sometimes joyfully, lawlessly mashing up things that taste good together is, well, fun. Take this example. Sushi is all understated rice and smooth fillings, wrapped in seaweed. Burritos are spicy, loud flavors wrapped in flour tortillas. Fuse the two into a “sushi-rito” and you have a bunch of tastes that really work together, in one crazy package. The Sushirito is the best kind of cultural combo.

It’s all in good fun, isn’t it? Nobody is claiming that this is an ancient dish, created by Japanese peasants, or handed down from a pre-Columbian grandma. Nope, This is just stuff I like, wrapped in a glorious sheet of carbs. Whole grain rice, whole grain tortillas, and vegetables, nothing to get upset about. Just because I put wasabi mayo and Tapatio hot sauce on the same dish doesn’t make my Sushirito a crime against cultural authenticity.

For this bad boy, I cooked up some medium grain brown rice and seasoned it with a little rice vinegar and sugar, and I quick pickled some julienned watermelon radish. Some asparagus spears, steamed until crisp-tender, were perfectly in season. Wasabi mayo is always good, and some kraut and pickled ginger gave it some fermented goodness.

But then I veered over into burrito territory, by spreading it on a whole wheat tortilla and serving it with hot sauce. So there. I must say, my husband, who kind of politely goes along with sushi, ate this with no reservations. We both dug in like college kids at Chipotle.

So if you are craving both sushi and burritos, you are in luck. Maybe you can put on your favorite 90’s dance mix to complete the nostalgic feeling.

Try the Sushirito and enjoy a little honest fusion food. 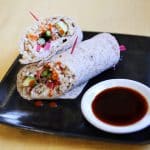 We love sushi, and we love burritos. Skip the sushi rolling and simply twist up a burrito with seasonal vegetables. Then you can douse it in your favorite hot sauce and dip in soy sauce, for a fun and easy meal.
Course Main Course
Servings 4
Author Robin Asbell