What is a Quince? Try This Lovely, Easy Compote

Every winter, alongside the persimmons and pomegranates, you’ll see these rather lumpy, pear-shaped fruits called quinces. If you aren’t familiar with them, you might even buy one, take it home, and wait for it to ripen, or take a bite. The hard, tannic fruit will come as a shocking surprise, and you might well toss the quince in the trash, never to buy one again. That would be a real shame, since the true character of this unique fruit is only revealed wwhen you simmer it for a good bit, and the fruit softens and releases an enticing perfume.

Quinces are an ancient fruit, thought to have originated in the area around Iran. Quinces are referred to in the bible, ancient Greek and Roman mythology, and were revered in many ancient cultures. In the ages before apples and pears were the predominant fruits, the quince was both sturdy and easy to store for a while unrefrigerated, both important qualities. Quinces made their way all over Europe and Asia, and were brought to the US by the colonists. The English settlers planted and cooked with quince until it gradually was replaced by apple trees. It’s now a specialty item, sought out by people who grew up with quince dishes, and people like you who are curious about interesting fruit.

The big selling point of the quince, to this day, is the gift of a high pectin content. Pectin is a form of starch that occurs naturally in fruits, which, when cooked, thickens and jells. Some fruits are low in pectin, so it must be added to make a jam, but quinces have abundant pectin. You can basically cook them with a little sugar and make jam, without any additional thickening.

The quince is the star ingredient of Dulce de Membrillo Paste, the sliceable fruit paste that is served with cheese and charcuterie in Spain and other Mediterranean countries. In a classic combination, the sweet and tart cooked quince cuts through the richness of cheese and complements the flavors of salty cured meats. In England, they make “Quince Cheese” that is similar to Membrillo, with varying flavor additions.

Your Quince and Cranberry compote can fill the same function as Membrillo, alongside your cheese, or a pot of cashew cheese. It can be serve like a chutney or relish at many meals. The fruity mixture serves as a palate cleanser, and awakens your palate in between bites of richer, savory foods. It’s also a fine jam to serve on toast.

Quince is a rich source of vitamin C, zinc, potassium and iron, and dietary fiber. It is also rich in certain organic compounds like catechin, epicatechin and limonene. Like most fruits, it’s good for your health. This compote is naturally sweetened with apple cider and maple syrup, for a hint of maple along with the luscious quince.

The next time you see those odd, lumpy quinces at the market, definitely give them a try in this easy compote. You’ll be sharing a taste that goes back for centuries. 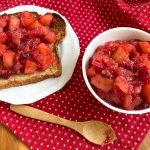