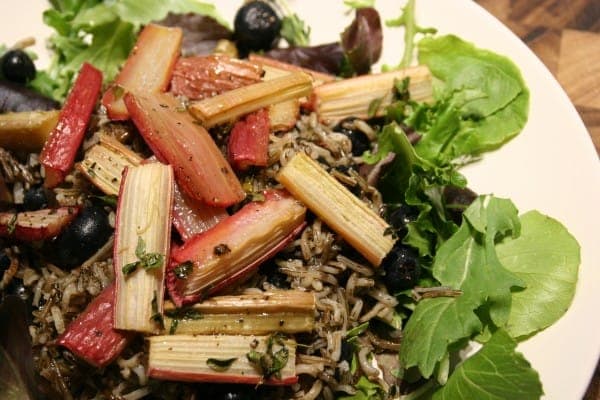 Oh, my Garden. It’s emotionally intense, compared to gardens I had in Illinois. The beginning is fraught with peril, as I watch weather reports for hard freezes and frosts, trying to time my plantings for the earliest possible moment. I have to be ready to jump in with my trusty trowel, often while the snow pile on the driveway is still melting.

If the timing isn’t right, and a book deadline or tour comes at the decisive moment, the summer heat will be on my late plantings before the spinach has even germinated, and that spinach bolts like lightning. A salad or two and its time to move on to kale, which seems to be more philosophical about the seasons.

Good thing we have such amazing Farmer’s Markets!

But this year, I may have gotten a good start. Sure, to the rest of the world, mid-June for rhubarb is absurd, but to me, it’s nice to have it. I’ve got baby kale, and salad-ready spinach, thank  you very much.

So it’s time to make salad while the sun shines. In this case, I thought it was high time I did something with my rhubarb besides the ever lovable sauces, chutneys and pies. Sure, they are evergreens, but the tart beauty of rhubarb offers so much more.

It was time to go (dramatic music..) SAVORY.

Well, with rhubarb, I can only go so savory, since it is so sour that you just have to goose it with some sweetness. But roasting it with thyme, salt and pepper and then piling it up on a big salad, that was a new thing for me. 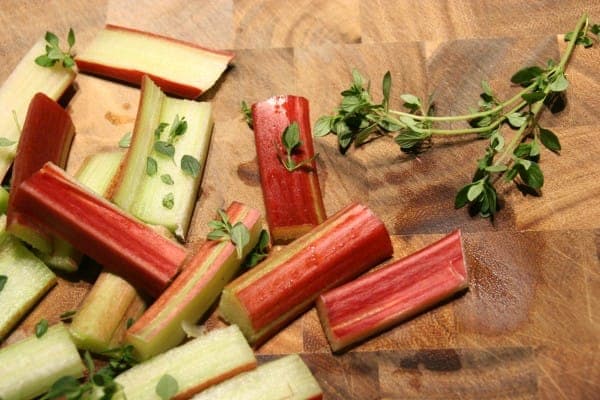 Rosy Red Rhubarb with Thyme, Fresh From the Garden

So I chopped the fat, juicy stalks into planks, spread them on an oiled pan, and drizzled them with maple, thyme, and a sprinkle of salt and pepper. A brief roast at 400 and they were meltingly soft and a little browned.

From there it was clear that my local wild rice and some spring-themed berries would go well, and I had enough baby spinach to mix with some store bought greens and make a salad of it. I thought about complicating things by pureeing some rhubarb for the dressing, but it was nice to use some raspberry infused white balsamic I had in the cupboard.

You could always try that at home.

This is a lovely side salad for four, although you could make a meal for two out of it, especially with a handful of toasted walnuts, or if you are into dairy, a crumble of soft goat cheese.

Serves 4 as a side

Cook the wild rice, drain and cool.
Preheat the oven to 400 F. On a sheet pan, smear a tablespoon of olive oil. Cut the rhubarb in thin planks lengthwise, then in 3 inch pieces. Place on the oiled pan and drizzle with maple, thyme leaves and some of the salt and pepper. Roast for 20 minutes.
To assemble salad, whisk the remaining olive oil, maple, vinegar, salt and pepper and mix with the cooled rice and blueberries. Pile greens on a large plate, then top with wild rice. Arrange the rhubarb over it and serve. 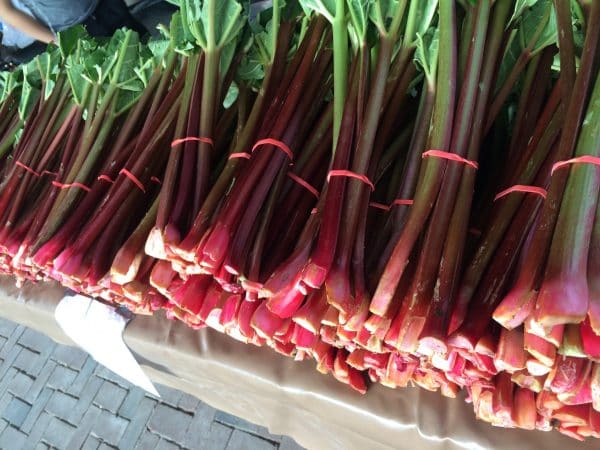