Chill Out with a Matcha Latte Smoothie 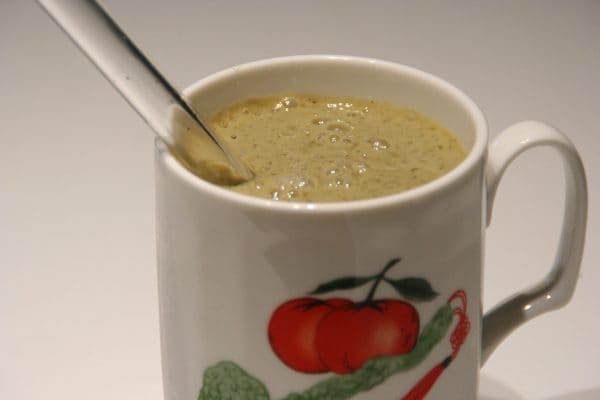 Green tea is one of the most super of the superfoods. But sometimes it gets lost in the shuffle, as we guzzle our coffee lattes and green juices. Green tea is a form of green juice, in a way. The unfermented tea leaves we refer to as “green” seem to hold the promise of a long and healthy life.

Drinking green tea also protects your teeth, as long as you drink it without a bunch of sweetener. It steps in and protects your bones.It’s also a useful tool for weight loss, as part of a balanced plan.

But did you know that when you brew your green tea, you are leaving behind lots of healthy compounds in the discarded leaves?

That’s where Matcha comes in.

Matcha tea is an ancient Japanese tea made by quickly steaming just picked green tea leaves, drying, then grinding. The resulting powder does not dissolve, like instant tea, but is traditionally whipped with hot water to make a tea emulsion. While the slightly sludgy effect may seem odd to the average soda consumer, it is a great way to really taste your tea.

Matcha is the preferred tea for the Japanese Tea Ceremony, where the bright green powder is whipped in a special cup with a bamboo whisk. If you are ever able to attend a traditional Chado ceremony, it is a beautiful experience.

But if you are looking for a tasty and completely American way to enjoy matcha, try my cold matcha smoothie.

It’s wildly delicious, energizing, and gives you all the health benefits of green tea in a super-cooling shake form.

1 cup unsweetened vanilla almond milk, or your milk of choice

1 tablespoon matcha powder (if you are caffeine sensitive, start with a teaspoon or two)

Blitz in the blender and drink while frothy and icy.