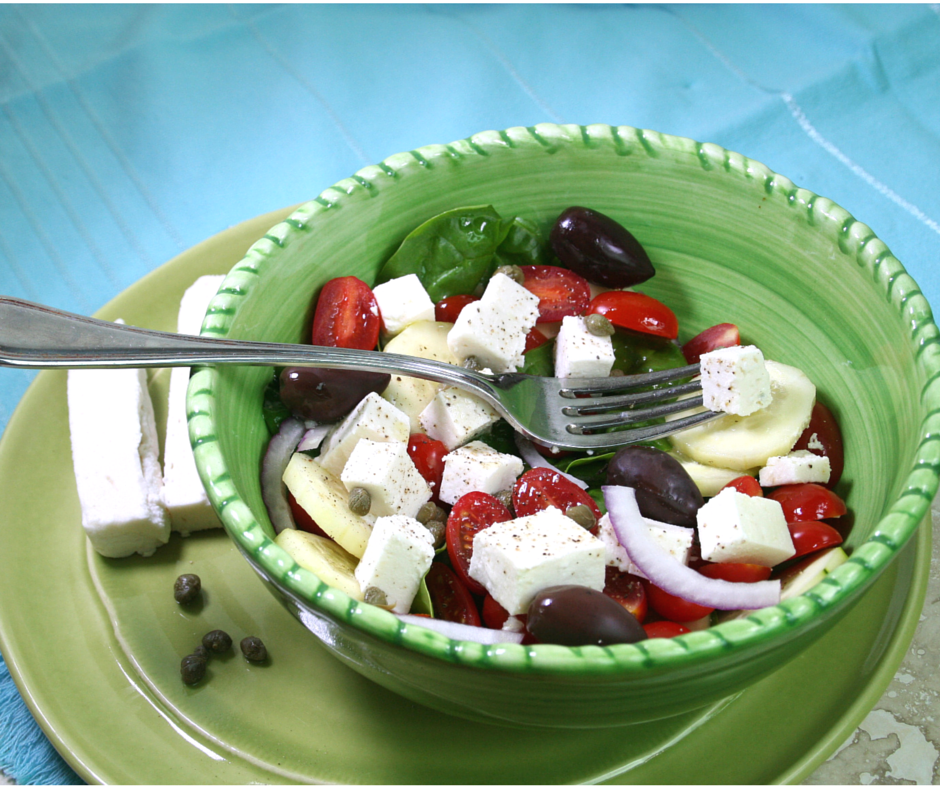 Can you believe it’s Vegan Feta?

Miyoko Schinner is both a grande dame and a hot new face on the vegan scene. She is the author of one of the first wave of vegan cookbooks, the Now and Zen Epicure, which she put out in 1990. That book is out of print, although a revised new version did come out in 2001, the New Now and Zen Epicure. Schinner ran a famous restaurant in San Francisco in the ’90’s, the Now and Zen, and has been a mover and a shaker in all things vegan for at least 30 years.

But her last book, Artisan Vegan Cheese, is responsible for bringing her hot and buzzy global fame, with a whole new set of vegan fans. Yes, Schinner cracked the cheese code. Not content to make the simple cashew cheese puree (that I have been plopping on pizzas and into sandwiches for years) Schinner wanted more.

She made vegan cheeses that made the leap to immortality, with careful fermentation and aging. Her cheeses changed the way we look at fermented nut pastes forever. The book was a huge seller, and Schinner now has a successful vegan cheese production facility, and sells some mock meats, too.

(I hope that you read last weeks post on Miyoko’s “Cheese.” If not, just scroll down later.)

Not content to solve the cheese dilemma, Schinner is now going to make your whole foods life even more complete. She has written a new book.

The Homemade Vegan Pantry: The Art of Making Your Own Staples (Ten Speed Press $22.99)

Yes, she has put out a pantry book, so that you can make whole, home made versions of all the processed vegan foods that line the grocers shelves. Mayo, butter, mock meats, canned soups, pasta, biscuit mix, bread, sauces, energy bars, even mac and cheese mix. Everything you buy pre-made, but made with better ingredients. 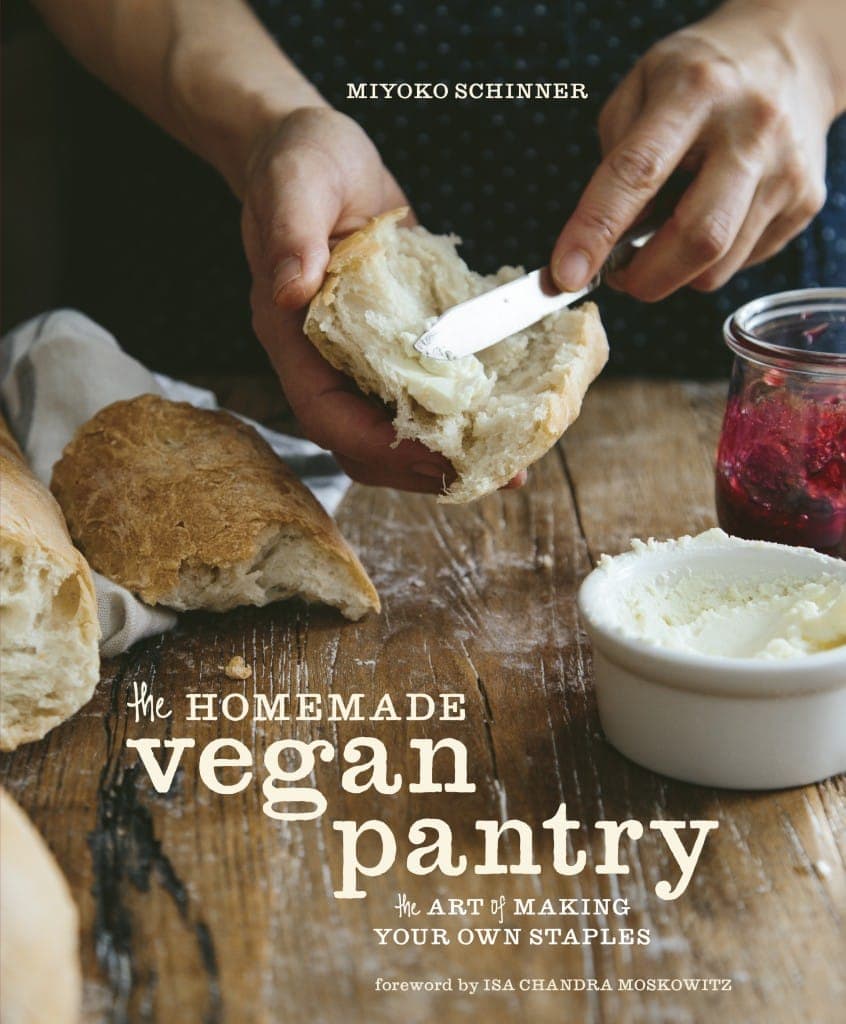 After last week’s “cultured nut product” review, I had to give one of the cheese recipes a try. For newbies, the “feta” is a good starter recipes. It’s a process, but it’s really all quite easy. It just takes a few days.

First, I made Rejuvelac. Rejuvelac is one of those old-school health-nut foods that you don’t hear about anymore, and I am happy to see that she has put it to good use. It’s a live, fermented food, full of good bacteria, just like your beloved kombucha and kimchi.  For rejuvelac, all you need is some wheat berries (or quinoa for GF diners) and some water. Sprout the berries, then let them sit at room temp to ferment. 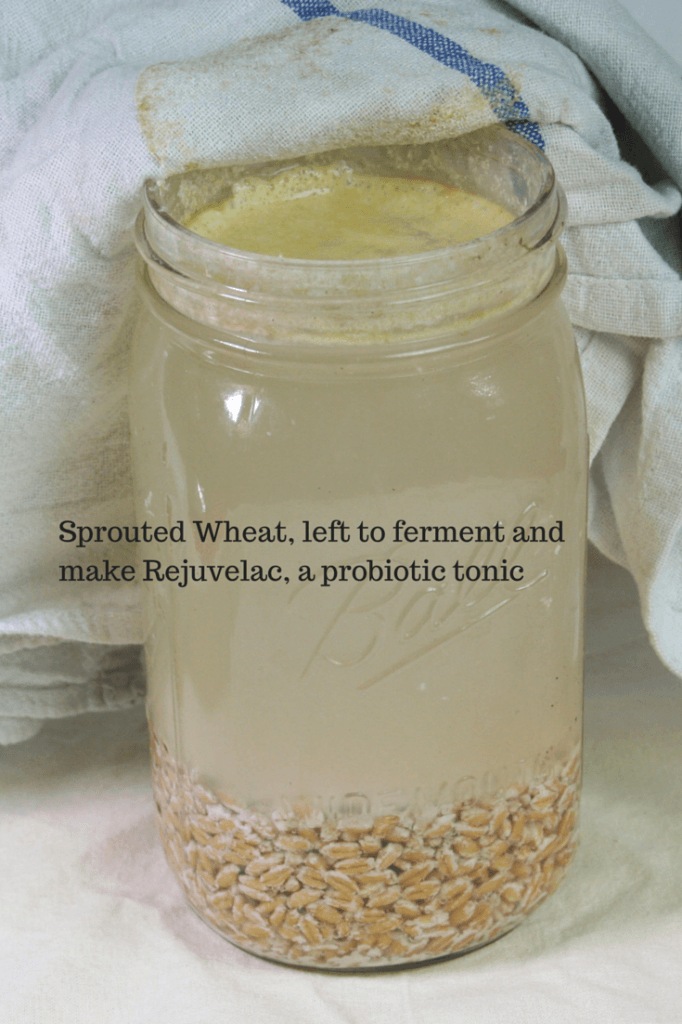 Easy to Make, Full of Lactobacteria

The resulting liquid is a culture, and when you add it to your cashew puree, you are seeding it with lactic bacteria to make it ferment. All  this adds umami and a tanginess that is reminiscent of the fermented flavors of cheese. You just let the almond-rejuvelac paste sit, then cook up a gel of water and agar powder to thicken it. Stir that in, spread in a pan, and you have cashew “cheese.” 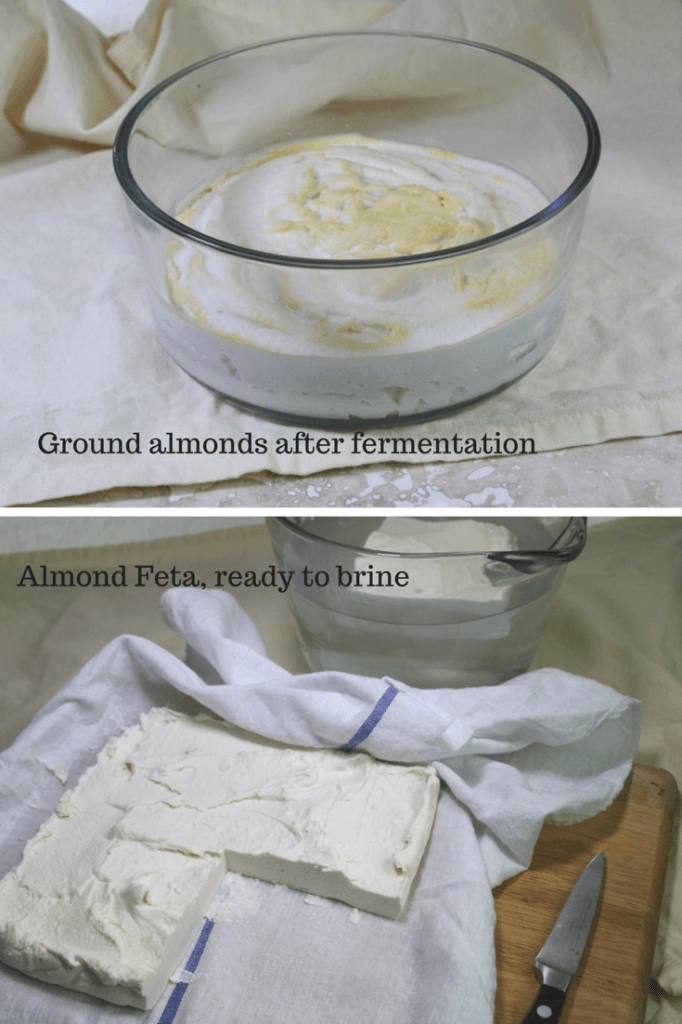 First a fermentation, then the cheese is set with agar agar

After the mixture sets up, it gets a soak in brine, for the familiar briney flavor of Feta. 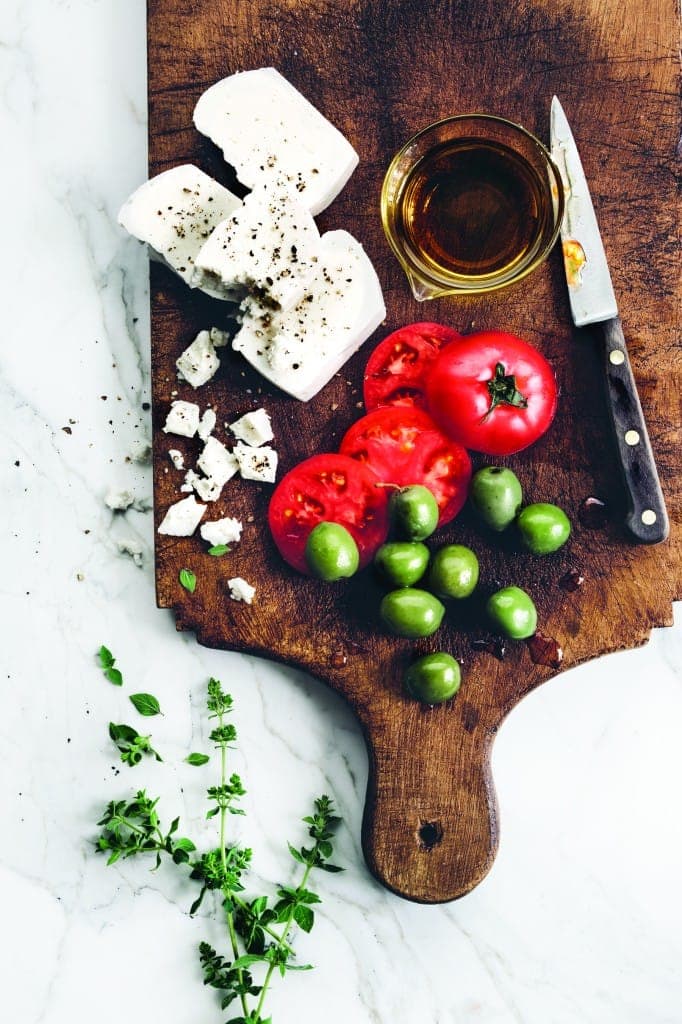 I used the cheese to make a simple Greek Salad with Almond “Feta” The “cheese” was smooth and creamy, and had a mild, tangy note. I served it to a friend, who suspected nothing until I spilled the beans.

It’s not cheese, but it’s got good bacteria, the nutrition of nuts, and the taste is truly satisfying.

I’m looking forward to trying some of the other pantry recipes in the book. I’ve written many articles on the importance of the pantry: If you want to eat well, you have to have good food within arms reach. If your resolution is to eat plant-based, whole foods cuisine, invest the time into stocking up on Miyoko Schinner’s pantry staples.

It will make your life easier and tastier.

(From The Homemade Vegan Pantry: The Art of Making Your Own Staples (Ten Speed Press $22.99) by Miyoko Schinner)

I had almost forgotten the joy that feta cheese can add to dishes. For example, the wonderful Greek spinach pie, spanakopita—I had basically given up on this entirely. I’d made and had many vegan versions of it, but without the briny flavor of feta, the flavors just fell flat. After much knocking around in my noggin, I came up with the perfect vegan substitute. Salty and briny, this feta works beautifully crumbled over salads or slightly melted in all of the traditional dishes. Best of all, stored in brine, it keeps for weeks, getting stronger in flavor and more delicious as time goes by (in fact, it vastly improves after a month, so make this weeks ahead of time if you can).

2 cups blanched almonds, soaked in water for 12 to 24 hours

1 cup Easy Rejuvelac (see below) or juice from sauerkraut

Drain and rinse the almonds. Place them in a high-speed blender with the rejuvelac and salt, and process on the highest setting for 1 to 2 minutes until smooth and no longer grainy to the tongue. Pour the mixture into a clean container and cover with a nonpermeable lid or plastic wrap. Leave on your kitchen counter for 1 to 2 days to culture, making sure you taste it each day, until it begins to get tangy. Keep in mind there is no hard and fast rule about how long it needs to culture—your taste buds will have to guide you in determining the right length of time. In warmer weather, it could be just a day, while in cooler weather, it could take 2 days or even longer.

Once the cheese is slightly tangy, you can move onto solidifying it. First, prepare the mold for the cheese by lining an 8-inch square pan with cheesecloth. Combine the water and agar in a medium saucepan and whisk well. Cover the pan with a lid and bring to a simmer over low heat. Don’t peek for 3 to 4 minutes, then check to see if it is bubbling away. At first, if you peek too early, it may look as if it has solidified. However, if you let it simmer over low heat for a couple of minutes more, it will start to liquefy again and bubble away. When the agar is fully dissolved, pour in the cultured almond mixture and whisk immediately until fully combined. Pour the cheese mixture into the cheesecloth-lined pan. Refrigerate for several hours, until hard.

Prepare the brine by whisking together the water and the salt in a large bowl until most of the salt is dissolved. Cut the cheese into four pieces and place in the brine. Cover and let sit for 8 hours at room temperature. Transfer the cheese to a storage container and pour the brine over the cheese until it is halfway submerged. Add more plain water to completely cover the cheese and dilute the brine. Store in the refrigerator for up to 3 or 4 months. The flavor vastly improves after the first 3 to 4 weeks.

Fear not—making rejuvelac is really not that complicated or scary.

Put the quinoa or wheat berries into a 1-quart wide-mouth jar. (Make sure that the grains aren’t already presprouted!). Cover them with water and let sit for 8 to 12 hours, then drain. Secure the top with cheesecloth and rinse and drain the grains twice a day until you see sprouts—quinoa sprouts in less than 24 hours, whereas wheat berries generally take about 2 days. Now fill the jar with filtered water, cover with a lid, and leave at room temperature (out of direct sunlight) for 2 to 3 days, until the water is cloudy and bubbly. Strain out the seeds and refrigerate the liquid, which is now lactic acid–rich rejuvelac. You can turn the strained sprouts into another batch of rejuvelac by filling the jar with water and letting it sit for another couple of days. The rejuvelac keeps in the refrigerator for 3 to 4 weeks.

Cut the feta into small cubes and reserve. In four large salad bowls, arrange the spinach, cucumber, tomato, olives and capers. In a small cup, whisk the lemon, olive oil, garlic, and salt. Drizzle the dressing over the salads and top with feta and cracked black pepper.