My Asian Dumpling Obsession, and a Recipe 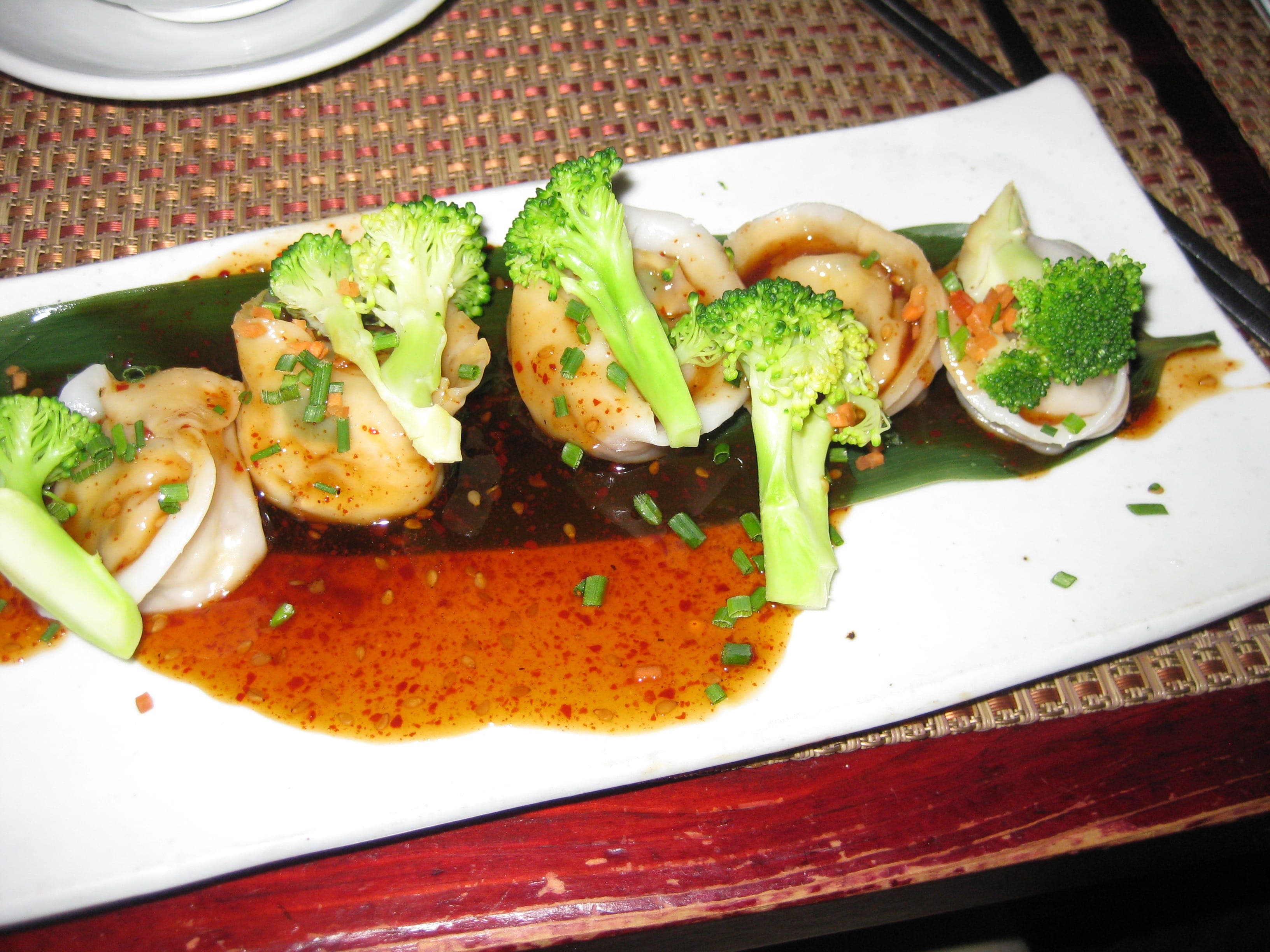 Vegetable Dumplings at HanGawi in NYC

If you read last week’s post, you got a peek at my fabulous macrobiotic meal at a restaurant named Mana. We shared two kinds of steamed dumplings, one filled with a mash of lightly curried sweet potatoes, the other stuffed with greens and vegetables. This was not my first dumpling experience in the Big City. In fact, pretty much every time there is a veggie dumpling on a menu, I order it. The photo above is of a lovely veggie dumpling I had at the vegan Korean restaurant HanGawi, just a few days before. Although they are somewhat obscured by lightly steamed broccoli florets, you can see that they are folded in a tortellini-style shape. They were filled with tender greens, and perched on a puddle of sweet-sour hot sauce.

I couldn’t stop there, and when I had dinner at The Spice Market, a Jean Georges Vongerichten restaurant, I had another version. This time, they bobbed in a tasty soup. 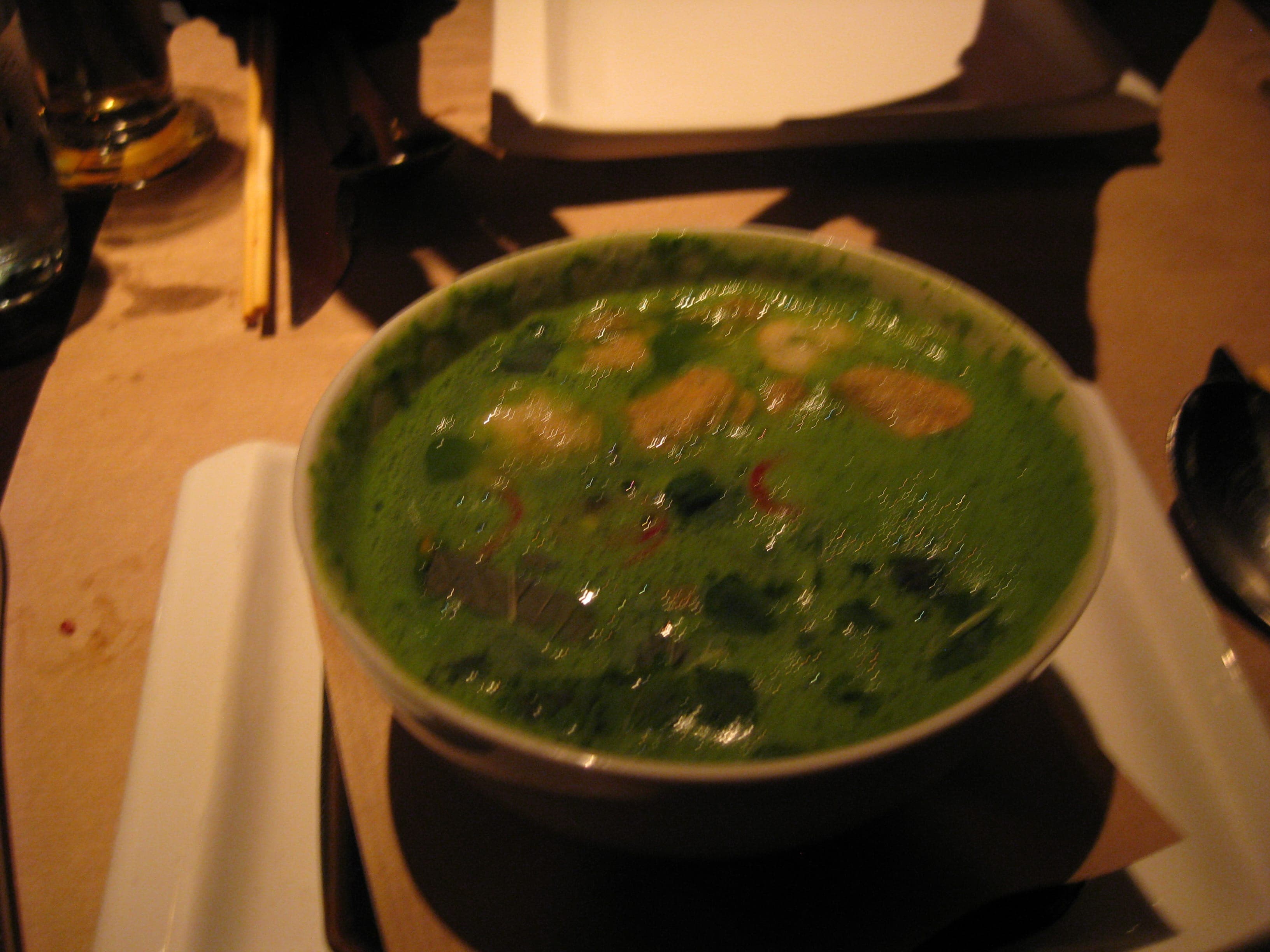 This was definitely an upscale soup, a sweet and subtle puree of absolutely fresh, shelled peas, with a few chopped greens and herbs. The dumplings were tiny and tender, filled with miso-spiked pea puree. It was a celebration of the English Pea, a seasonal and fleeting delight. It was delicious.

Of course, then came the dumplings at Mana, where we shared them, dipped in tasty soy-based sauces. 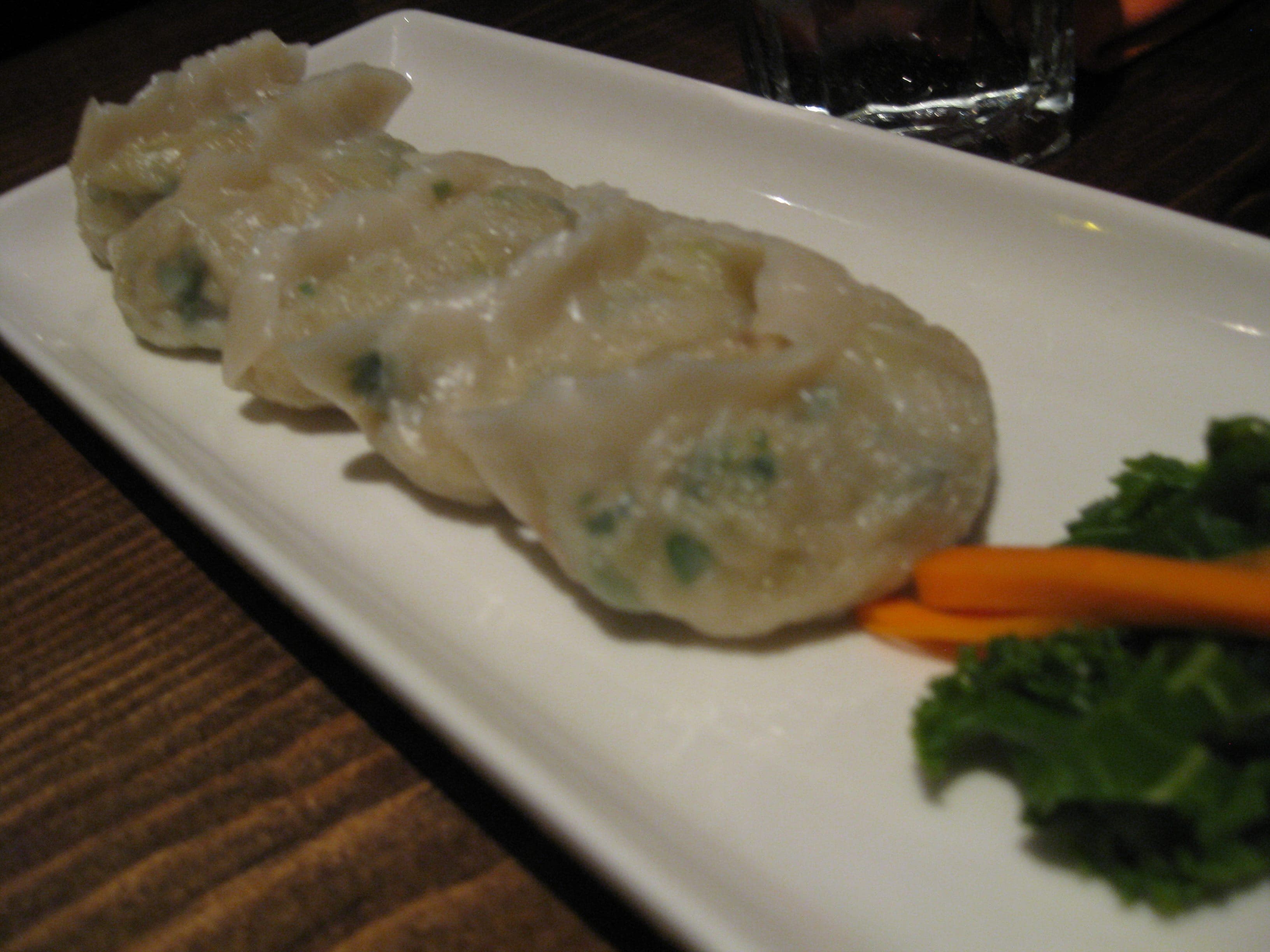 When you come right down to it, a plump, juicy dumpling is irresistible. Little pillows of deliciousness that they are, they are like a present, specially wrapped just for you. The sauce is the bow on top. You get to eat them with your fingers, if you want, or pick them up with chopsticks, which is also pretty playful. So, if you can see where this is all leading, I thought I should make some steamed veggie dumplings when I got home. 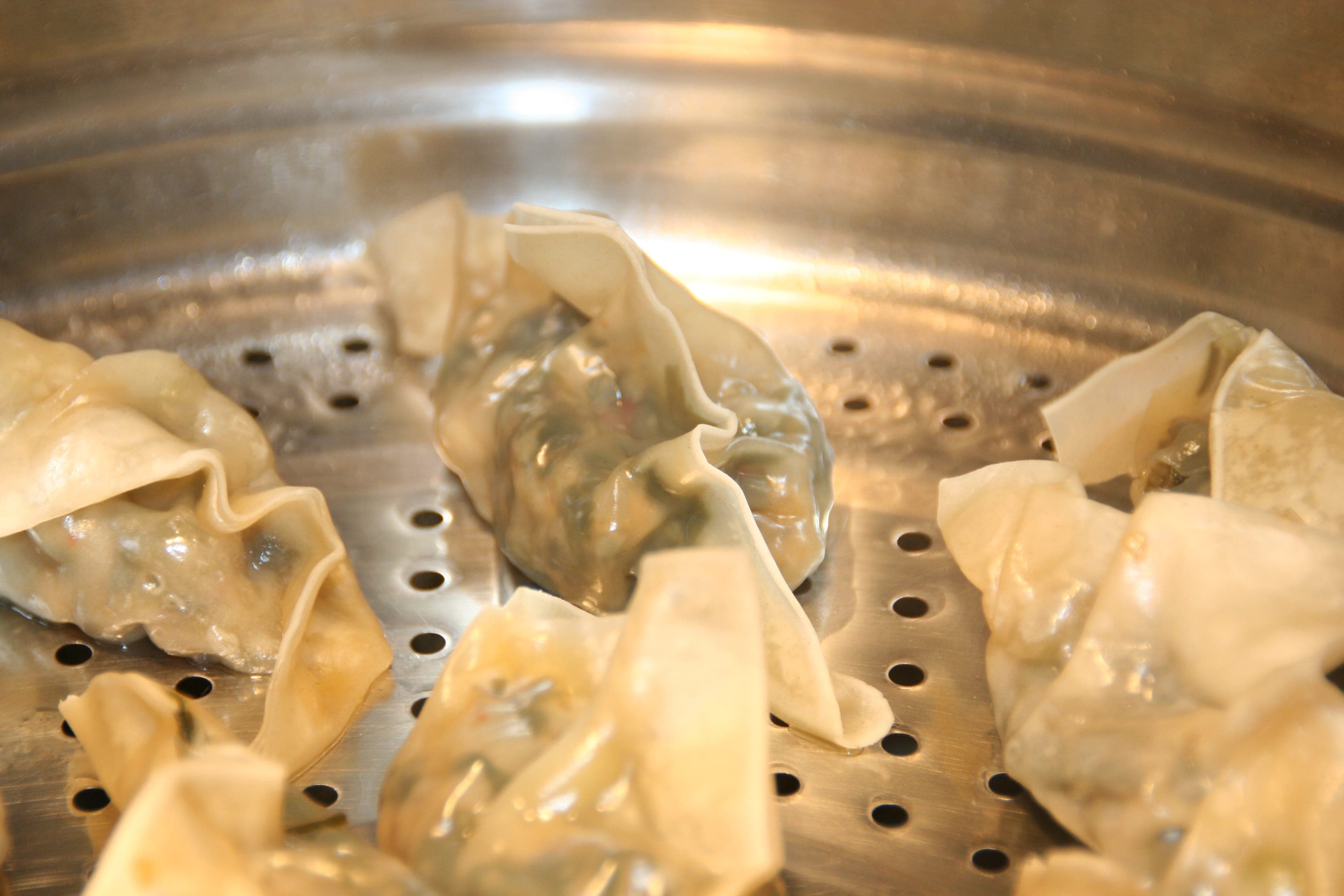 I’ve made versions of this recipe for years, and found that they benefit from the complexity and funk that a bit of preserved or pickled cabbage adds. I used easy to find wonton skins in the photo, which are thinner, and kind of flop over in the steamer, but are just as yummy. If you are vegan, look at the ingredients on your wrappers, many brands are actually egg-free.

1. Use 1 teaspoon of the oil to stir fry the vegetables until almost wilted. Add salt, pepper, wine, soy sauce, and sugar, cook until thick. Remove from heat, scrape into a bowl and cool completely.
2. To assemble, get a pastry brush and a cup of water, and a steamer or plate, and cut some parchment pieces for each dumpling. Lay out several wrappers and place a scant tablespoon of filling in the center of each. Brush the top half of each wrap and pull the two sides up around the filling, and form a flat bottom. Pleat the top edge and set each on a piece of parchment on the steamer. Cover with plastic as you go. These can be covered and refrigerated for a few hours, or frozen raw to be cooked frozen.
3. To cook, set up to steam. When the water is boiling, put the steamer over it, cover, and steam for about 8 minutes. When the dumpling wrappers are tender and the veggies are hot all the way in the center, they are done.  Let diners mix the three condiments to suit their tastes on the plate. 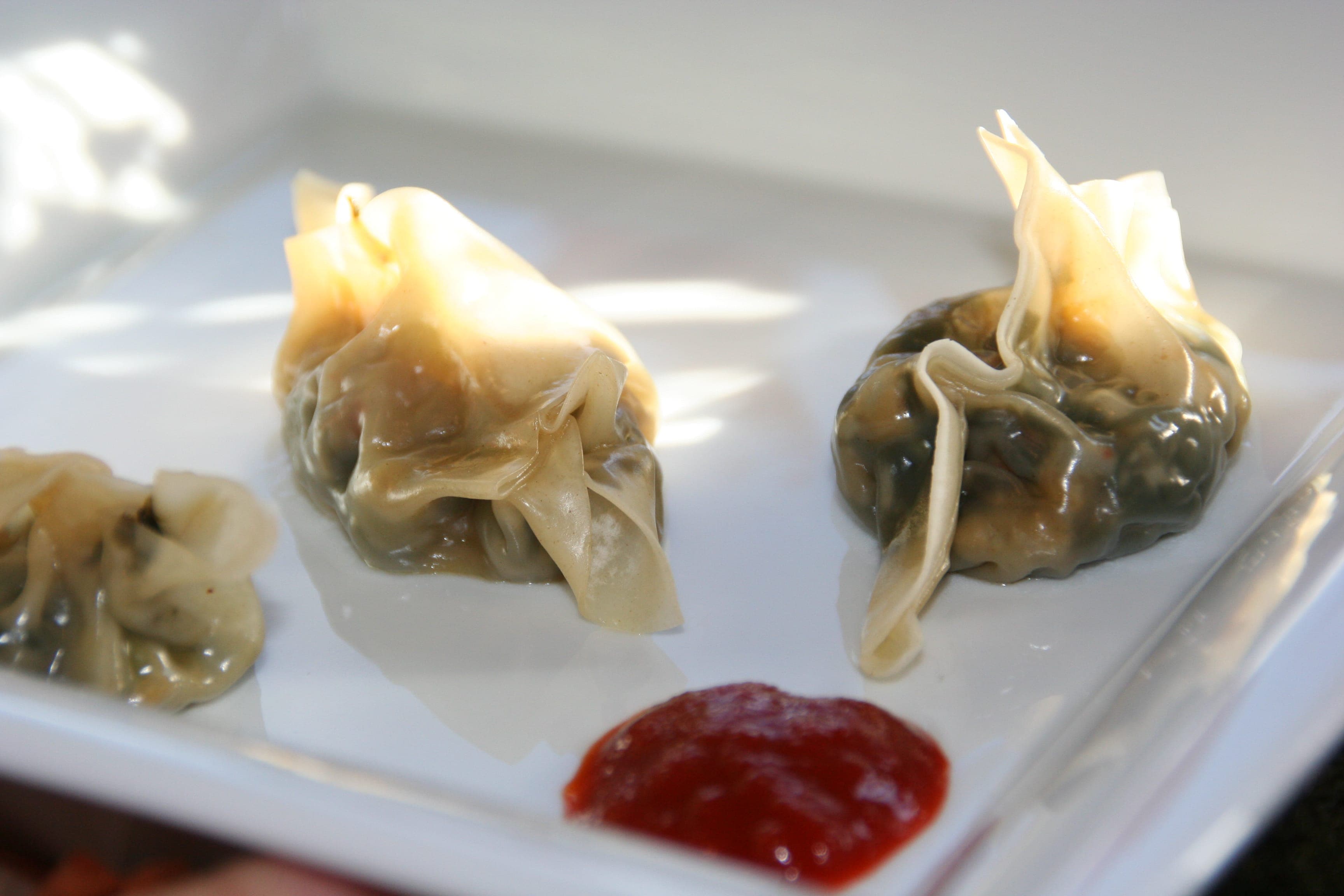 With a little Sriracha