Are You Crazy For Pumpkin Spice?

We seem to fall into two camps. There is a growing number of people who look forward to Pumpkin Spice Season as eagerly as summer vacation or baseball. Then there are the people who are either blissfully indifferent, or just plain sick of hearing about all the new pumpkin spice flavored products, from ice cream and cookies to mac and cheese and bologna.

As always, when something becomes a fad, it often gets a little over exposed. That’s no reason to blame the quintessential combination of pumpkin and warming spices, especially when it comes in its original pie-shaped form. The thing that bothers me is the way that manufacturers take a good thing (mmm, pie!) and make it into a fake thing (non-dairy creamer with artificial flavors.) Most of these foods and drinks have ZERO pumpkin and ZERO spice. It’s all Fake.

So, as your Plant Based Chef and real foods enthusiast, I wanted to share an easy to make, foamy, fragrant latte that contains ACTUAL pumpkin and spices. It takes a few minutes longer to make than pouring bottled chemicals in a cup, but it’s worth it.

Then, for a crazy, radical riff on pumpkin spice, I’m sharing my favorite pumpkin spice chili. Cubed, meaty-textured kabocha squash stands in for pumpkin (which is usually not pumpkin) and the spices we use in pumpkin pie accompany cumin and jalapeno for a nuanced, playful take on chili.

Watch the video to learn a safe and easy way to peel and cube winter squash, for a nice, chunky texture in the chili. Then it’s easy to cook it like any other vegetable in the chili with spices. I prefer Kabocha, but you can use whatever squash you have.

I’ve also got great recipes for a Squash Hummus and a Kabocha Cornbread, so check those out, too.

As much as we love to take potshots at some of the more absurd products, only the Grinch can really claim to hate pumpkin pie, and all the really good things that taste like it. These days, there is plenty to argue about, and let’s face it, we all need a little comfort. If a hot latte that reminds you of Thanksgiving at Grandma’s house will help, by all means, have one. Have two! 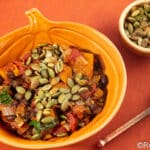