Is anyone else ready to eat like it’s a normal Spring? Just a bright, sunny, buds-are-busting-out-all-over kind of Spring? Everybody is soaking their dried beans and that’s great. But you actually can find the first asparagus of the season, and it’s looking pretty good. The big grocery store shortages are of flour and TP, not phyllo dough, so I think we are pretty safe to indulge in this frivolous, and yes, sexy little dish. Aphrodisiac Asparagus in Phyllo is a step above your usual veggie sides, and you deserve it.

Give Me Fresh, Green Veggies!

It’s finally warm out, here in Minnesota, I’m getting the shorts out of their spot in the back of the closet, and preparing for lots of gardening. I’m also cooking to keep my spirits up and my system in peak readiness to fight off any foreign invaders. I know it’s kind of a matter of luck, but if I do walk into a cloud of Covid-19 microparticles, I hope my immune system is going to give it the “old college try” and knock it back.

When asparagus looks good, and you can get some nice, fat spears, its time to make this festive finger food. Asparagus is known as an aphrodisiac, and as the most suggestibly shaped vegetables of Spring, you can guess why. There’s actually some nutrition behind it, too, with B-vitamins and folate chipping in to help fuel the processes needed for arousal, and Vitamin E contributing to the creation of sex hormones in both genders.

But really, it’s as healthful and supportive as all the other veggies, with lots of good fiber, vitamins and minerals to keep your heart healthy. You can’t really get sexy without getting your heart pumping, can you?

Aphrodisiac Asparagus to the Rescue

I’ve made this phyllo wrapped treat before, if you want to try it with a different sauce, click here: Asparagus Spears with Chutney

Wrapping the spears in phyllo isn’t hard, just watch the video or follow the recipe, it comes to you once you get going. 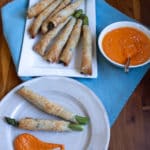 Asparagus Spears in Phyllo with Romesco