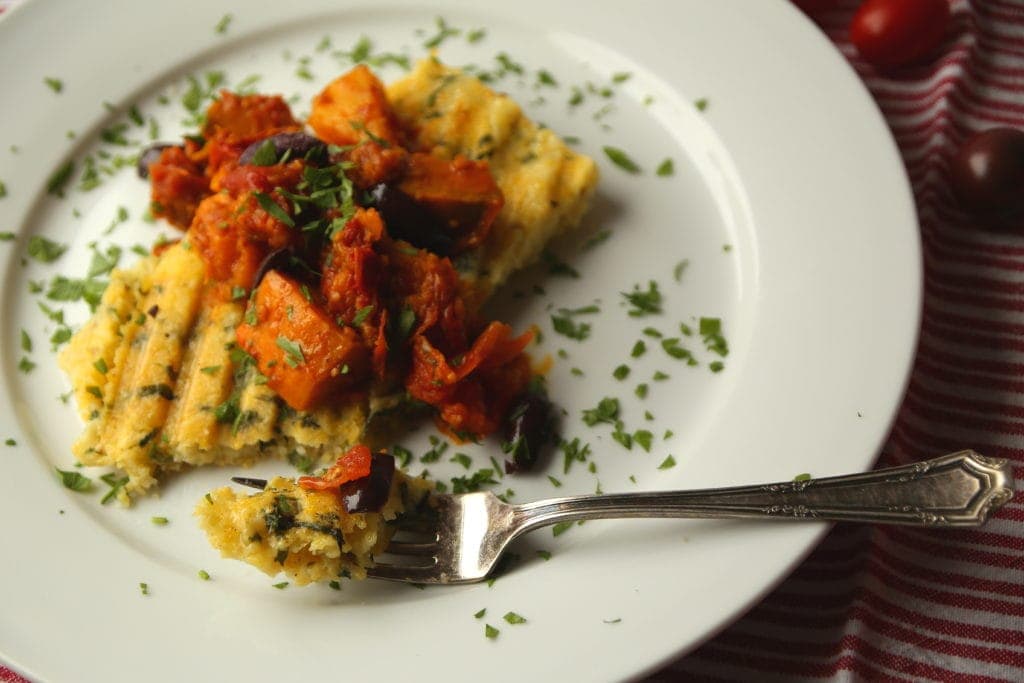 Few foods are as comforting and satisfying as polenta. Cornmeal polenta is soft and creamy, but with just enough texture to give it a toothsome crunch, and perfect for grilling to a crisp golden crustiness. Grilled polenta offers the best of both worlds, with the softness of mashed potatoes and the crusty outer shell of a french fry.

It’s a perfect food for Fall, keeping you warm from the inside as the chill winds start to blow.

The polenta we know is made from whole grain corn, which puts it in a special class. It’s one of the whole grain foods that has a gloss of gourmet, and makes it onto restaurant menus without a hint of healthful motivation. Its sunny yellow color and authentic Italian pedigree move it out of the ranks of brown and crunchy health foods and into the world of artisanal pastas and risottos.

It’s an amazing reinvention, for a food that was once the cheap gruel of the poorest peasants. A New World plant, corn didn’t make it to Italy until the 1600’s, so it is relatively new. Historians believe that the idea of polenta, or coarsely ground grains cooked in water, may have been one of the first grain foods, preceding breads and pastas, simply because it is so basic.

It’s not hard to imagine: people picked seeds, people cracked them with rocks, people cooked them in water, people saved the leftovers. Hello polenta. That same mass of congealed cooked grain eventually became pasta, fermented flatbreads, heck, beer was probably the happy accident that happened when cooked grains fermented on their own.

When corn made its way to Italy, it replaced the millet, farro, chestnut, chickpea and buckwheat polentas that were being made. The sunny, sweet flavor of corn won people over, and the grain was grown to feed the starving peasants. Northern Italians still make whole grain polenta from corn, although some buckwheat polenta is still popular.

In the US, grits and cornmeal mush have a similar backstory, serving as the cheap food of the poor during times of scarcity. In both cases, the lack of key nutrients led to malnutrition, since corn alone cannot supply all the vitamins and minerals you need.

So there is some irony in the elevation of Cucina Povera to the realm of the gourmet. But whole grain polenta is a delicious, healthful food, as long as you don’t try to survive on polenta alone! Cornmeal is a great source of the fiber that most contemporary diets lack. It’s got some Iron, Vitamin A and B-vitamins, too. More recent research finds that corn delivers on antioxidants that prevent a host of ills, from cancer to vision problems. It’s also got resistant starch, a kind of starch that keeps us full longer. Just like those peasants.

For today’s recipe, I used Bob’s Red Mill Organic Polenta. It has a good particle size, with some chunkiness, but not so coarse that it takes hours too cook. It’s also readily available, so you should be able to find it. If you have another polenta, it’s simple enough to adjust, just cook it until it’s creamy and there are no hard bits.

People used to do this on rocks, so it can’t really be that tricky.

I started with my sauce, which used up the last of my garden tomatoes and a red kabocha squash that I got from a farmer. I fired up the oven and roasted everything while I made the polenta on the stovetop. 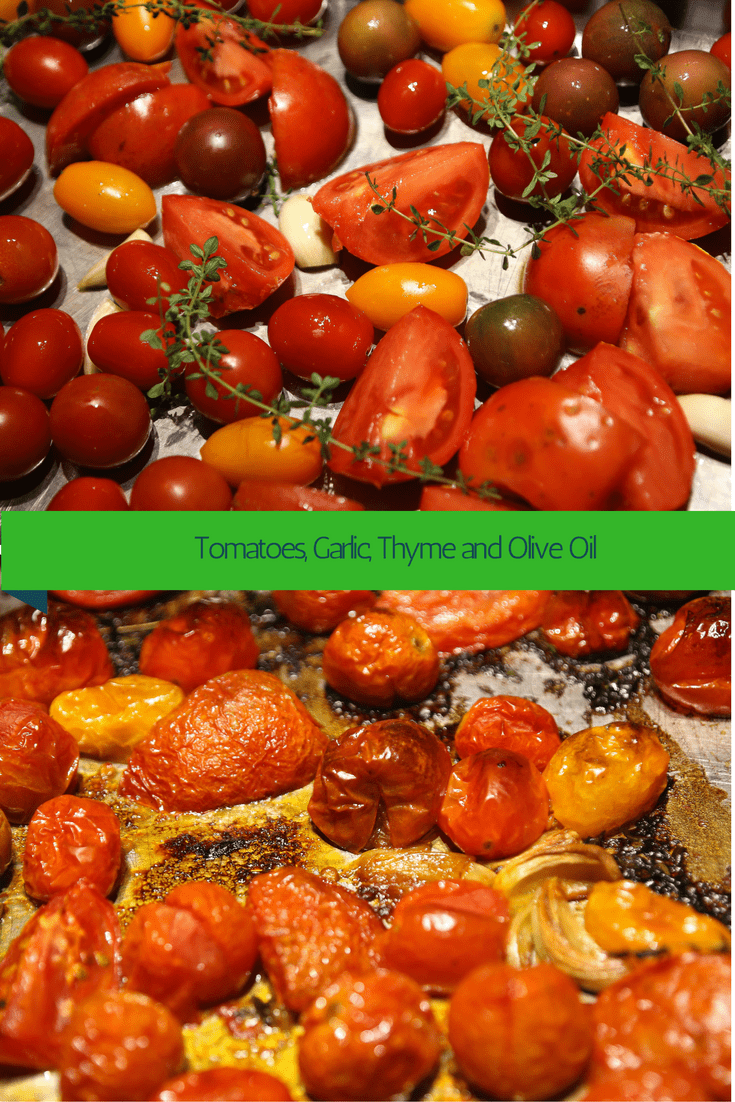 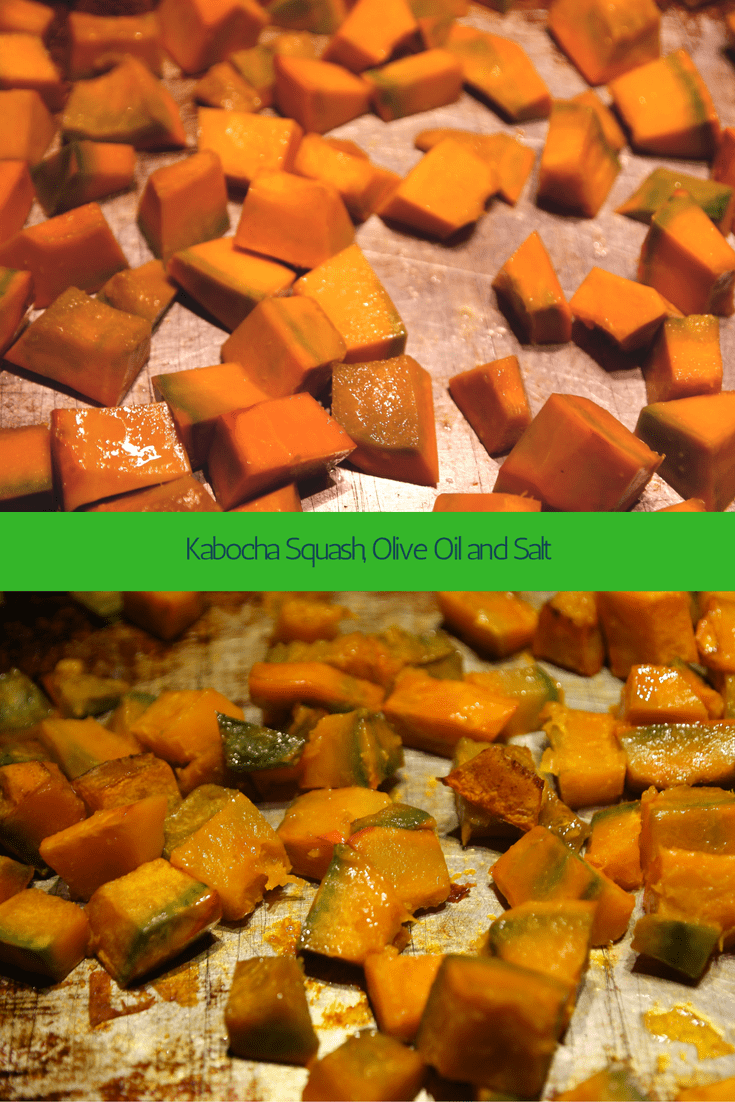 Stirring the polenta is not as grueling as some would have you believe, especially with a small batch. I just kept it on low and stirred every five minutes or so, until it got thick. Then it needs some attention. Once it’s thick you just stir in the arugala, and if using, the butter and cheese. Vegans can use olive oil instead of butter, and throw in some nooch for cheesiness. 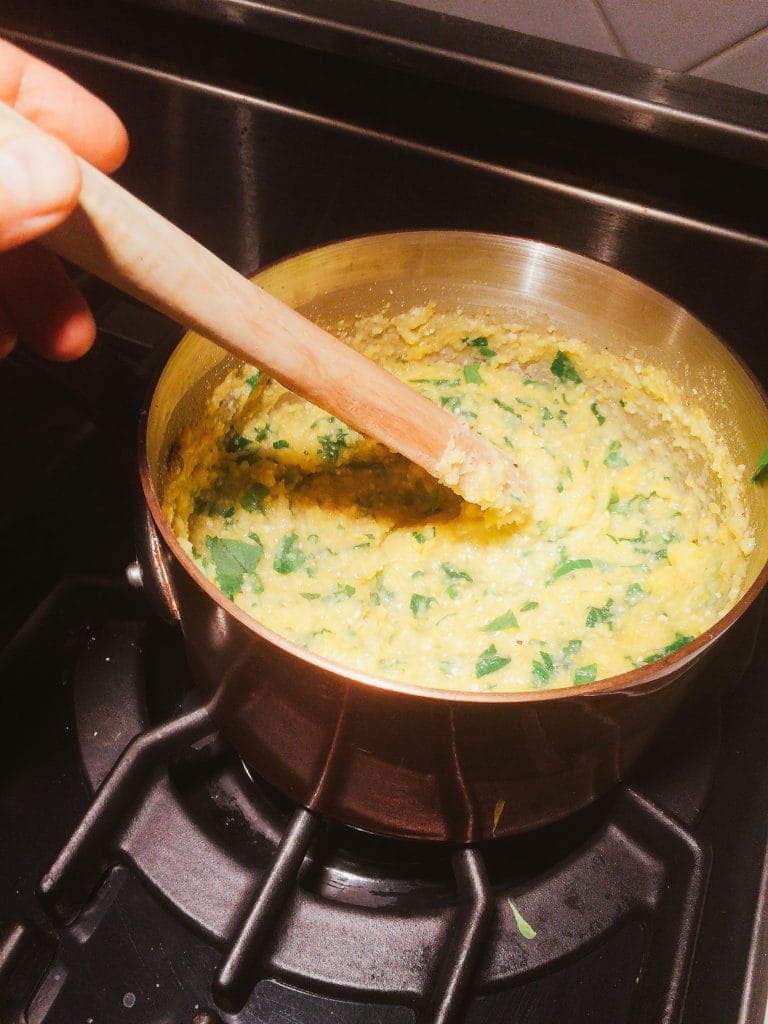 Once I spread it in the pan and chilled it, I thought it would be fun to put it in the panini press. This is completely optional, but it worked out well. It mashed the polenta into a less perfect shape, so if you need your food to stay perfectly square, you can use the griddle function of the panini maker and just grill each side.

I loved how the press made more crunchy surface area, giving the polenta more places for sauce to pool. But it was all about the crunch. However you grill the polenta, you need plenty of oil to keep it from sticking, and to help form that crispy crustiness.

The sauce is very rustic and chunky, I just mashed some of the squash cubes and whole garlic to give it some body, and left the rest in pieces. A handful of briny olives and a sprinkle of parsley was all it needed to show off the great flavor of all my vine-ripened tomatoes.

And there you have it, a whole grain dish to celebrate Whole Grains Month, all sunny and golden and steeped in history. It’s a great make-ahead dish, just reheat the sauce and grill the chilled polenta when it’s time to eat.

I know I’m thinking of the peasants who created this dish, and how it must have fueled them to work hard in the fields.

We are so lucky to have all kinds of amazing grains available, and to be able to try them all! 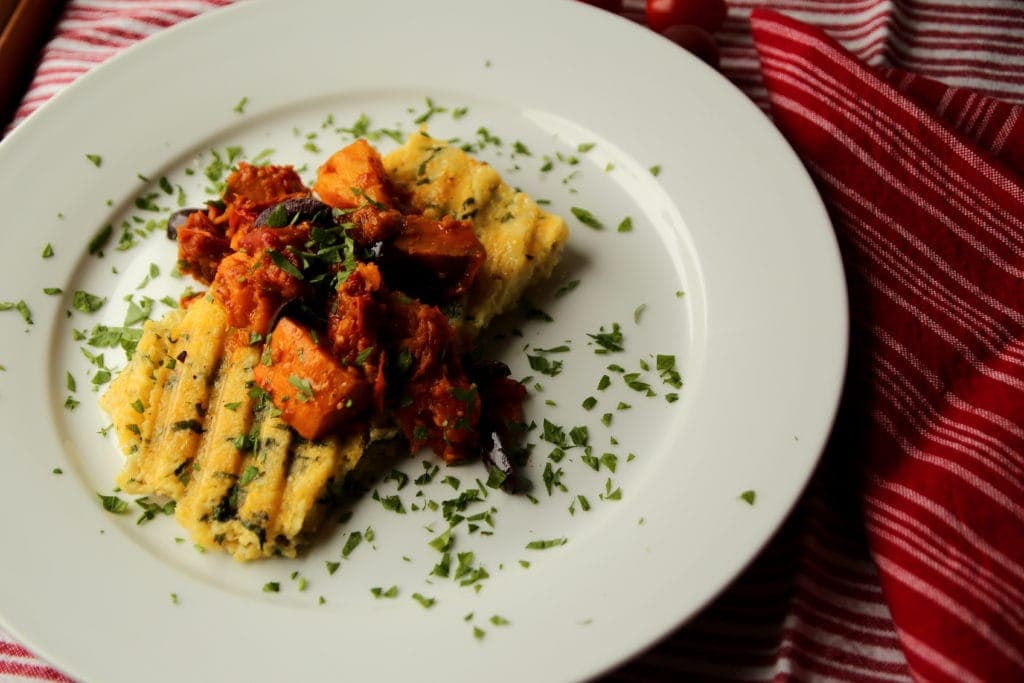 Put your polenta in a panini press!

Preheat the oven to 400 F. In a large roasting pan, toss half of the olive oil, the whole cherry tomatoes and large tomatoes, garlic, thyme and 1/2 teaspoon salt. Roast for about an hour, stirring every 20 minutes, until deeply wrinkled and browned.
In another roasting pan, toss the squash with the remaining olive oil and salt. Roast for about 30 minutes, until tender when pierced with a paring knife.
To make a sauce, mash several squash cubes and garlic cloves and stir into the tomatoes. Add the olives and reserve.
For the polenta, butter or oil an 8-inch square baking pan and reserve. Put the water in a small pot and whisk in the polenta and salt, and bring to a boil over medium high heat. Lower the heat and whisk often for about 25-30 minutes. When thick, stir in the butter and arugala, and stir until the arugala is softened, then stir in half of the cheese, and stir until melted. (vegans can skip the butter and cheese.) Spread in the prepared pan and chill until cold.
Slice in 9 squares and grill or press in a panini grill. Serve with sauce, covered with parsley, and if using, sprinkle with cheese.