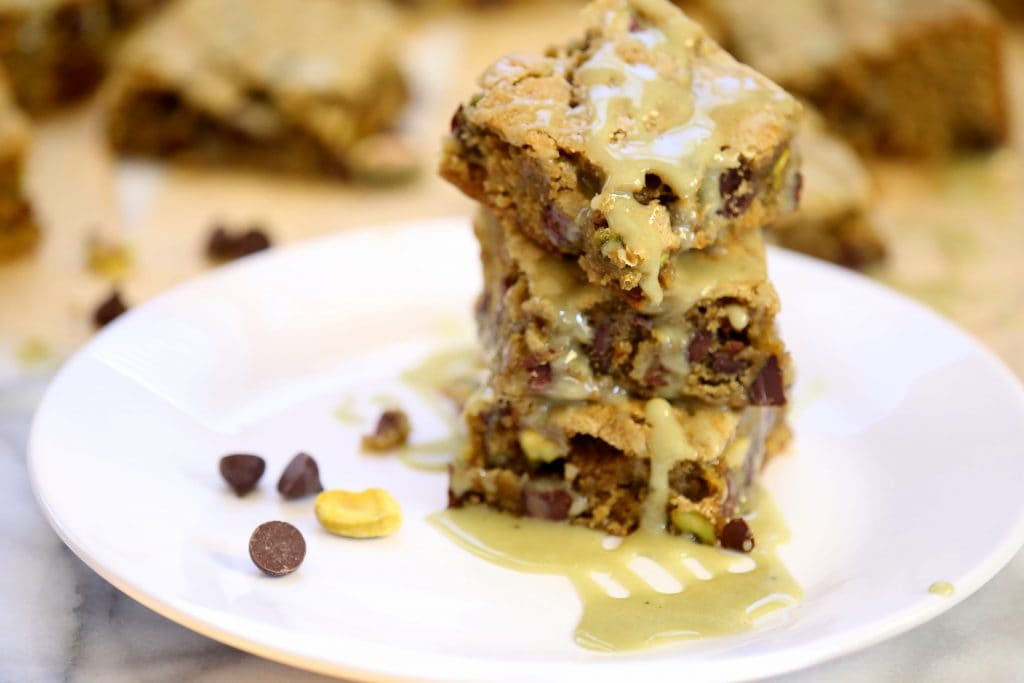 I remember the first pistachios I ever laid eyes on. They had bright red shells, and had arrived around the holidays. As a kid, the color of the shells drew me like a magnet, and I just had to get a handful of this new, exotic nut. Cracking open the hard shells with my teeth, I remember thinking that they were kind of sweet tasting, and not crunchy like other nuts. They were probably a little stale, to be truthful.

But I soldiered on, risking my dental health as I pried apart those technicolor shells. When it was all over, I noticed that my fingertips were tinted pink, stained by this magical red nut that was actually green inside. I wanted to do it again.

I now know that the red dye was a trick used by the nut sellers of that era, used to cover up their bruised, cracked and often rancid product. Back then, they were coming from Iran, and were the worse for the journey.

The Politics of Pistachios

In a strange, political twist of fate, Jimmy Carter stepped in. During the Iran hostage crisis of 1979, he put a ban on pistachios from Iran for one year. When that year ended, Iran dumped low cost pistachios on the US market, to keep the nascent American pistachio business from taking off. California growers persisted, until the Iraq war in ’87, when the US was suddenly willing to shut Iranian pistachios down again.

Fast forward to now, US growers harvested 830 million pounds of pistachios in 2016. Nobody is dyeing the shells anymore, and you can find shelled, raw, roasted and salted pistachios in most produce departments. It’s been an American success story.

Little did I know, back in that red shell era, that pistachios are one of the most healthful foods you can eat. With more protein and less fat per calorie than most other nuts, they are full of fiber that keeps you full and satisfied. The fats or the good, monounsaturated kind, and pistachios lower bad cholesterol and raise the good. A small handful gives you all the Vitamin E you need for the day, and some B-vitamins, minerals, and antioxidants. 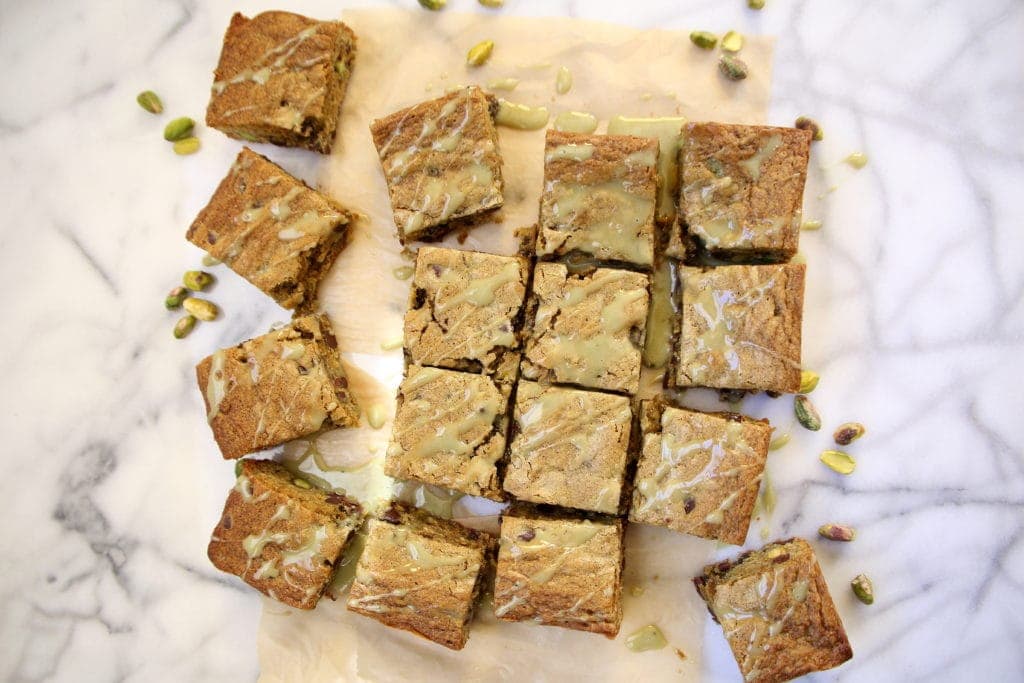 Bursting with pistachio flavor, these blondies will disappear quickly…

The green nut even has lutein and zeanthin, the antioxidants that protect your eyes from macular degeneration.

All the better for seeing these delicious blondies fly off the plate! 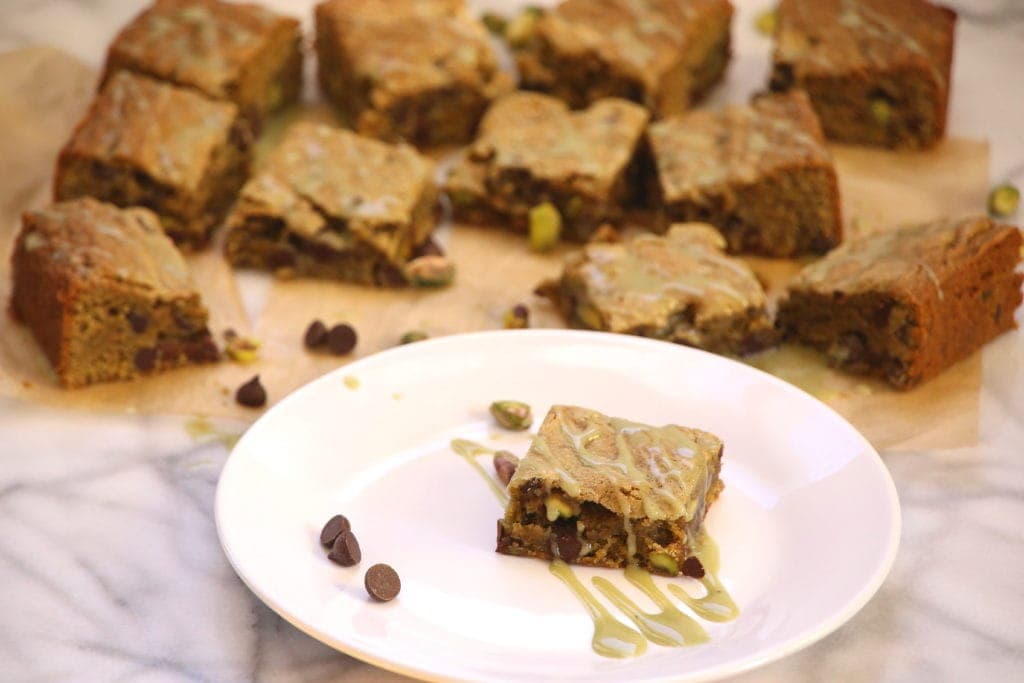 Underbaked just enough to be soft and gooey

For these decadent bars, I used my Vitamix to make pistachio butter, then mixed it into the batter. You can always use a food processor, too, it will just take more stops to scrape down and grind again. I love the way that the pistachio and matcha combine to give it a really exotic, rich flavor. Matcha in the glaze lets the sweetness of green tea shine through. 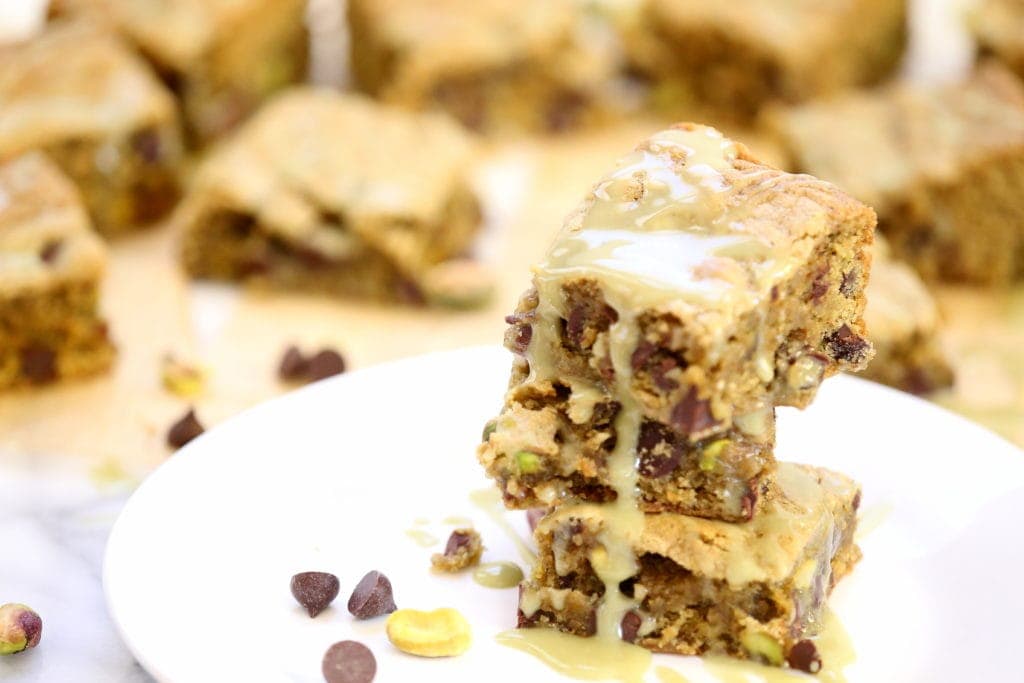 A stack of pistachio flavor

So celebrate National Pistachio Day with a lush, crunchy treat. You’ll be taking good care of yourself while you savor every bite! 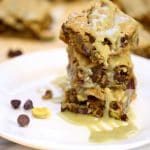 Pistachios Star in these crave-worthy bars.