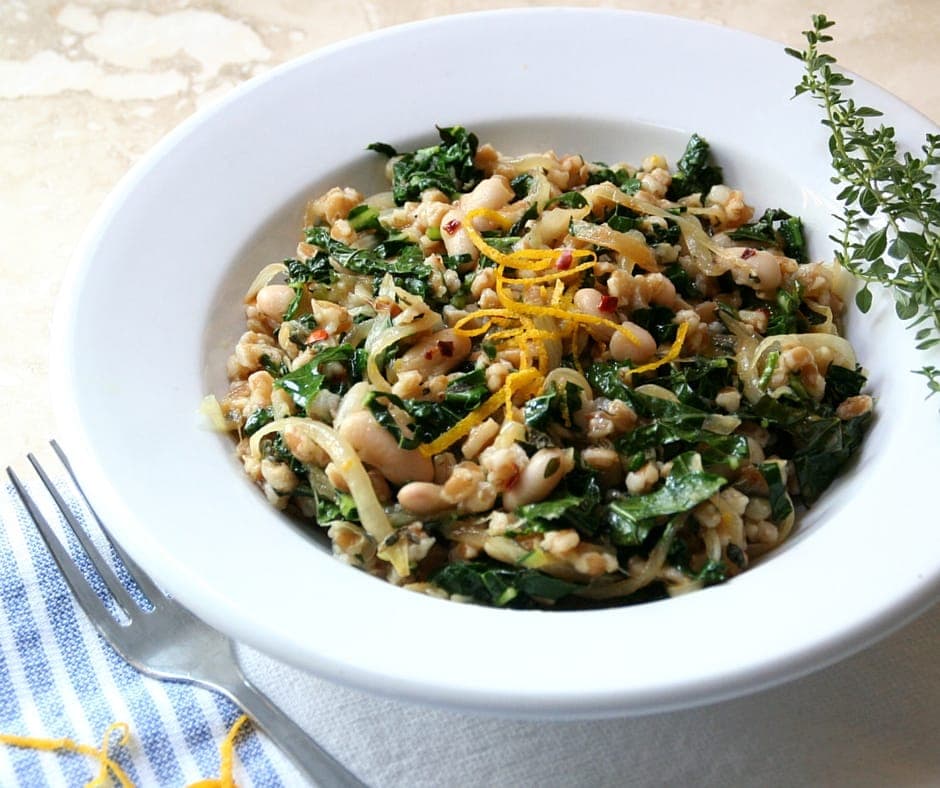 Chewy, Hearty Farro with a Hint of Orange

September’s the in-between season, when we might be languorously savoring a golden Fall day, or we might be clutching our sweaters just to keep the brisk wind from chilling our bones. It’s Nature’s way of giving us a little nudge, to let us know that Winter is Coming. Enjoy your walks in the sun, because the days are getting shorter, my friends. And it is ok.

At times like these, you need a hearty, filling Farro dish, that can be served hot or cold. On the deck, with a glass of Rose, or at the dinner table, with steam wafting from the fragrant bowl. Either way, the chewy, nutty Farro delivers a satisfying and sustaining boost of Ancient Grain goodness.

It’s also nice to use up some of that Tuscan Kale that is still plentiful in my garden.

I had a feeling that Farro would become a household word when I first saw it being used by Mario Batali on the food network. Overnight, a whole grain that is remarkably similar to wheat berries was suddenly sexy. The same gourmands who look down their noses at a wheat berry and veggie salad were swooning for a Farro and Cucumber Salad by the Maestro. And for good reason.

Farro is an Ancient grain, and when you shop for it, you may be getting one of three grains.  It’s either Einkorn (farro piccolo), Emmer (farro medio), or Spelt (farro grande) and it may be whole semi-pearled, or pearled. They are all ancient varieties of wheat. Farro gets some of its cachet from being a traditional staple in Tuscany, one of the most beloved food regions of the world. Like all wheats, it probably originated in the Fertile Crescent, and moved around the Mediterranean.

The Farro I used today turned out to be semi-pearled. That form is really popular, in part because it cooks in 20 minutes or so. It’s also less crunchy than your whole grain wheat berry, and is easily made into soft and juicy dishes like risotto or soup. 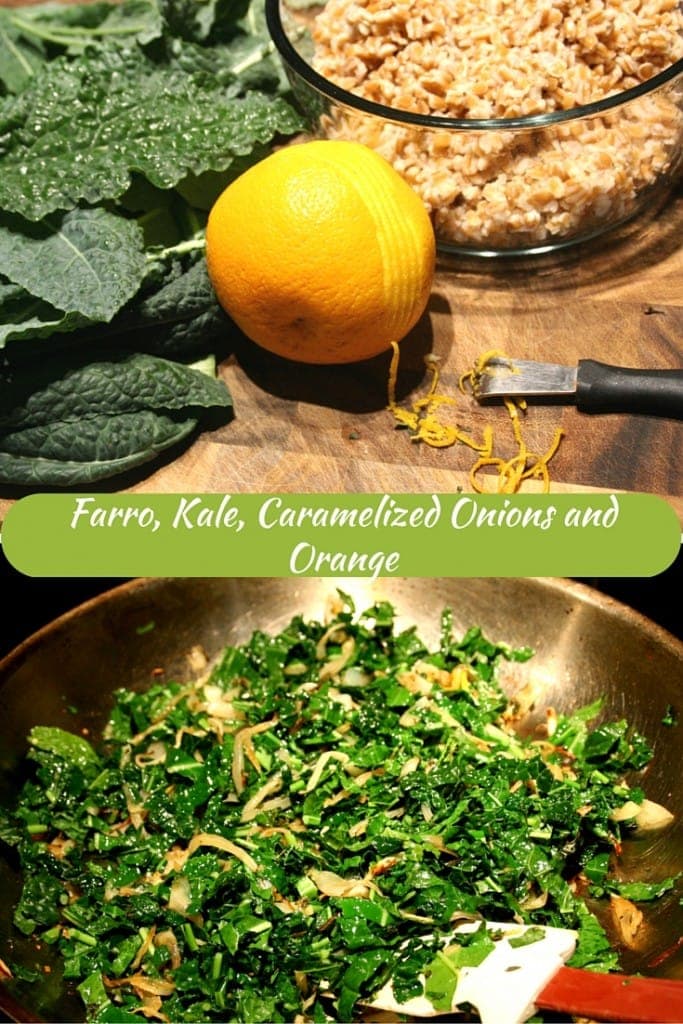 So simple to make

To match the big flavor of the Farro, I went with some deeply caramelized onions, and that was probably the most time consuming part of the whole affair. Fresh thyme from the garden, and some assertively bright orange zest and juice added some herbal and sweet and sour notes. Large handfuls of just-picked kale, sauteed just until wilted, gave it a minerally, bitter side. Creamy cannelini beans and a sprinkle of heat from red pepper flakes added more counterpoint to celebrate the whole grain Farro.

As I chewed a mouthful of these ancient grains, I let my mind wander to imagine how they must have been such a vital and revered food for the Roman legions and others who depended on them for sustenance all those years ago. Whole grains were the food of peasants, gladiators and kings. Here we are with a vast array of foods to choose from, and we are so lucky to be able to eat something so unique and storied. What was once the peasant’s porridge is now gourmet, and that’s the way I like it.

Cook the farro- Bring the water to a boil, add the farro, and cover tightly. Cook for about 30 minutes for semi-prealed (Bob’s is a little bit pearled) or longer for whole. When tender, drain any extra water and let cool.
In a large saute pan, heat the olive oil over medium high heat, and add the onions. Stir until the onions start to soften, then reduce the heat to low. Cook for at least 30 minutes, until the onions are golden brown and shrunken. Add the thyme, garlic, kale, orange zest, red pepper flakes and salt. Raise the heat to medium high again and sute until the kale is wilted. Stir in the orange juice and bring to a boil. Take off the heat.
To serve warm, add the farro and beans and stir to heat through. To serve cold, toss the farro, beans and the kale mixture in a bowl and let cool.