It’s August, and time for the Eat Local Challenge. In the spirit of eating local foods as often as possible this month, I searched out the best local ingredients for a “kick-off” local pie. I also had to start deciding who was going to get to eat this pie. A cherry pie like this must be appreciated, as you will see.

I started at the St Paul Farmers Market. There, for a brief period, Mark and Sue Christopher of Maple Leaf Orchard sell sour cherries every year. This year I was very lucky to get them, as there was a late freeze on May 9, which damaged the tender cherry blossoms. The crop was smaller than usual, which only made it more urgent that I get a few quarts pitted and frozen.

And baked into a pie.

Then, I made a trip to the Mill City Farmers Market to pick up fresh whole wheat pastry flour, grown and ground locally, and freshly flaked organic oats. Sunrise Flour Mill is a local treasure, and they put on a bit of a show at the market. The mom-and pop operation is all about bringing the freshest, local grains to the people, and they like to demonstrate their tabletop oat-flaker right there for the crowds.

My next acquisition was the always divine butter of Pastureland. Grass-fed cows make the milk for this local treasure, which has the natural yellow hue that comes from the carotenoids in grass. It’s secretly health food, but tastes too decadent to have any thoughts of healthiness cross your mind while you eat it.

The final, crowning touch were the Hickory nuts from Wisconsin that I had in the freezer from last year. Kind of a cheat, but I thought ahead. I had them once at Lucia’s restaurant, and was hooked. If you have never had hickory nuts, they are like a smaller version of a pecan, but taste like a delightful cross of walnuts and pecans. I ordered them on the internets from rayshickorynuts.com. Ray actually cracks each nut by hand, so the $24 a pound is a bargain.

So, I made my pie crust with the pastry flour, butter and salt. I made a streusel topping with flour, oats and hickory nuts. And I made the pie filling with the sour cherries. In my zeal, I wanted the pie to be overstuffed. This is what it looked like: 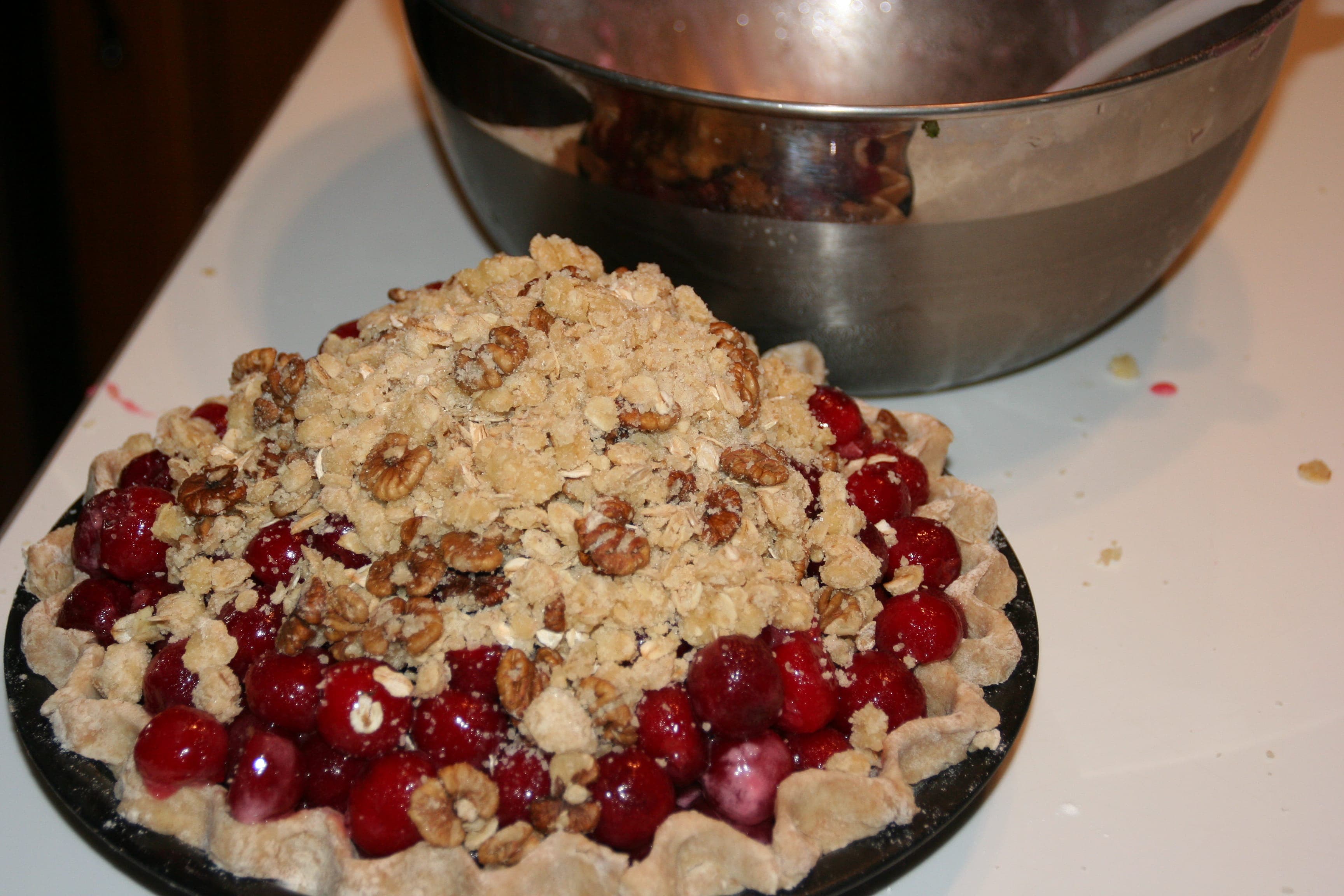 Of course it will run over- you know it will!

I covered the pie with foil, put a baking pan under it to catch the flow, and put it in a 400 F oven.  In half an hour, I turned the oven down to 375 for 30 minutes, then I uncovered the pie. By this time there was so much juice in the pan that I poured it off into a cup, where it thickened to a delicious sauce. I thought it needed another half hour, but it too about 45 minutes to get browned and thickened throughout. It was hard to wait, but we had to let it cool. 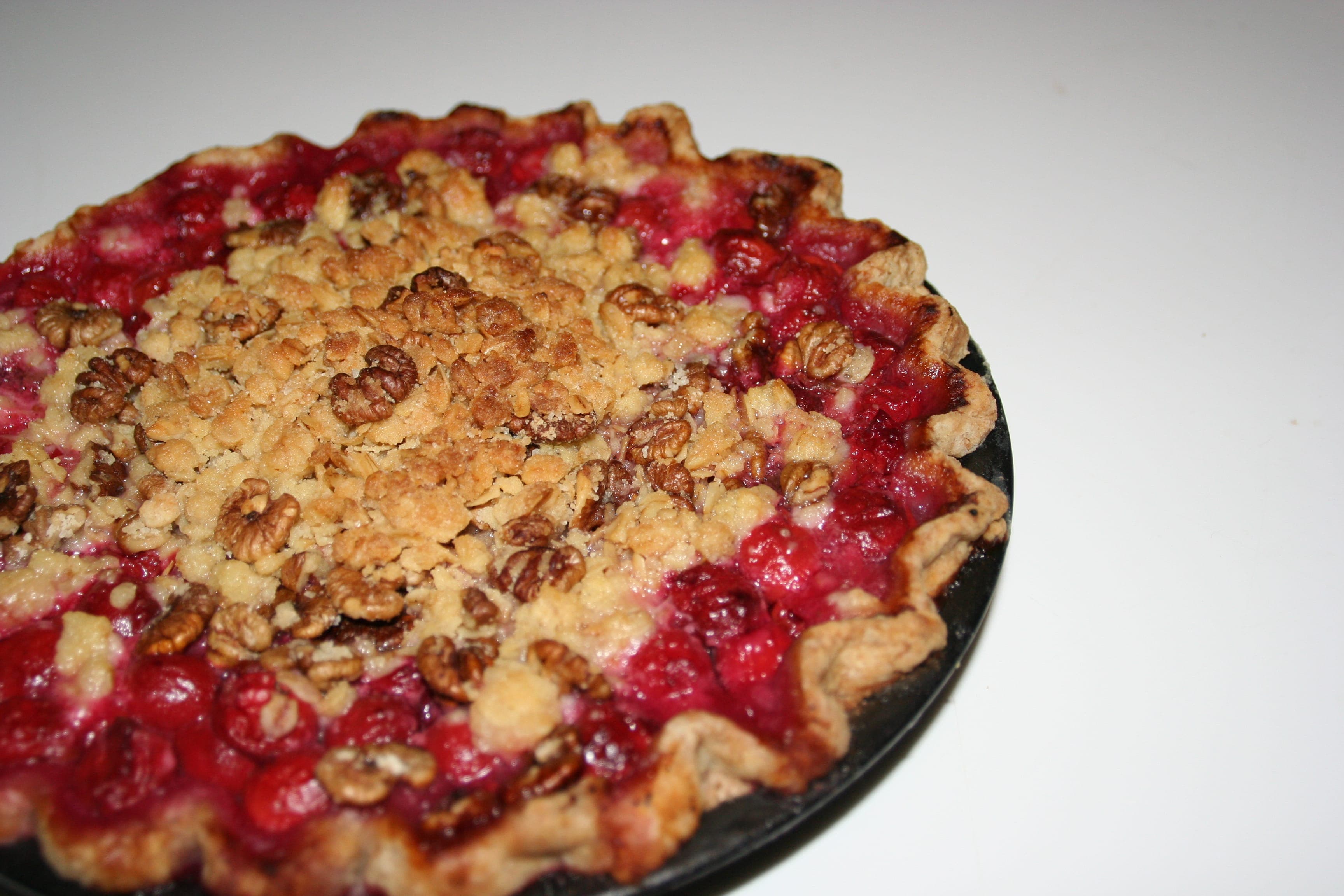 It all came out in the end!

So you might be wondering, who got to eat the pie? Many miles were traveled to share it with my Mom and Dad. I think I owe them a pie or two!

Don’t serve this to people who won’t appreciate it. It’s too special.

ice water and a shot of vinegar

a handful of hickory or other nuts

2 quarts fresh sour cherries, pitted (you will have about half a cup of extra filling)

1.Make the pie crust by mixing the flour and salt, then cutting or grating in the cold butter. Add 4 tbs ice water and gently mix, adding more to bring the mass together into a dough. Form a disk and chill for an hour. Roll out and line pie pan, flute rim and chill again. Preheat the oven to 400 F.

2. Stir together the streusel ingredients.

3. Mix the filling, stuff it in the pie, and top with streusel. Cover with foil, place on a rimmed baking sheet, and bake for 30, then reduce the heat to 375F. After 30 minutes, uncover and bake until thick juices bubble through the golden brown streusel.