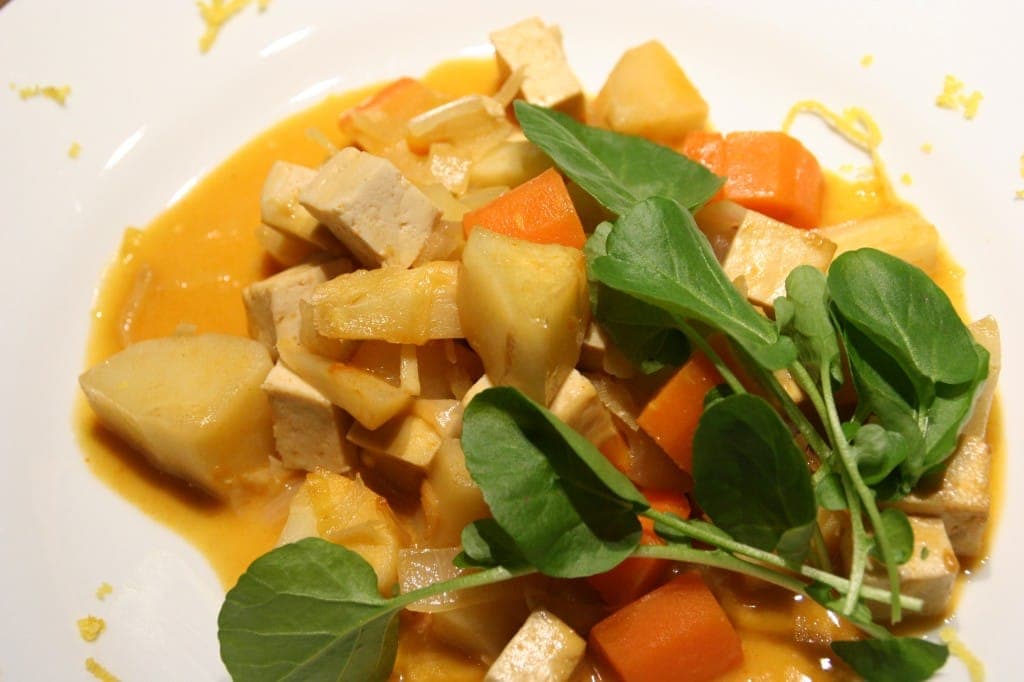 Add Watercress for a Peppery Kick

During our latest extreme cold snap, I found myself craving parsnips. The sweet, substantial root of the ‘snip is classic winter fare. As I bought mine, all clean and plump, I thought about early Minnesotans who must have had to store their roots in the root cellar, and pick through them all winter long. Right about now the Fall harvest might be getting a little gnarly, if it were not just frozen solid.

But channeling our intrepid prairie home cook, I knew that these unassuming roots would make a great, warming meal with the right handling. So, as I contemplated my craving more, I threw all prairie-style inspirations out the window, and steered toward someplace hotter.

Yes, I wanted some spice, and the sweetness of parsnips would make a great component in the sweet-salty-sour-hot balance that is Thai food. So, in a fusion made of both convenience and craving, I decided to make a roasted one-pot meal, with Thai flavors. Yes, my usual root veggie roast, but with a new theme.  I’d crank the oven, and instead of tossing my veg with olive oil, I’d stir up some coconut milk and red curry paste.

I was very pleased with the result.

You see, lately I have been trying to stave off the urge to hibernate by eating some metabolism-boosting foods. Chilis, of course, boost your metabolism enough to burn an extra hundred calories a day, if you eat enough of them. Ginger is truly a warming spice, which heats your system from the inside out. So I’ve been leaning toward some spicy foods, but I want them to be comfort foods. Coconut milk is so luxurious that it makes this simple vegetable dish into a decadent celebration.

To really make it exciting, I used real palm sugar from the Asian Market, the kind that comes compressed into little cakes that you have to shave off. I like it so much that I might have been a little heavy handed, but the resulting caramel flavor in the sauce was really great. I also had watercress, which added the fresh, herbal note that you could also get from cilantro, mint, or even basil.

It would be good over some cooked grains, like short-grain brown rice, or even quinoa, as long as we have left any idea of authenticity in the dust.

Because this kind of cold causes a kind of madness, I have an excuse. It just sounded good. 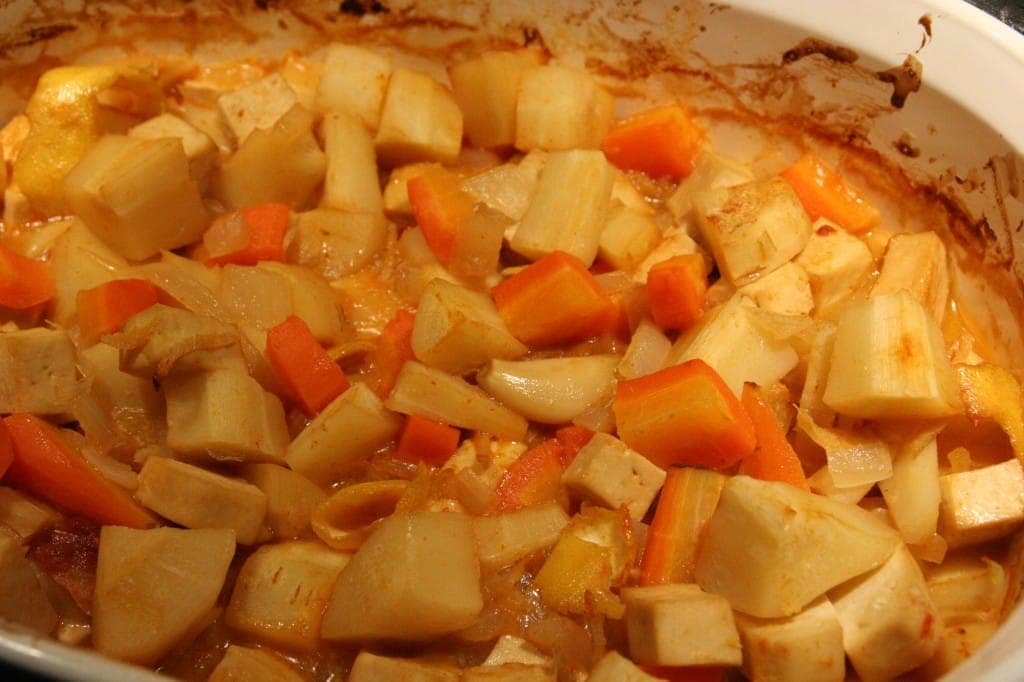 the pared peel of one lemon

1/4 cup palm sugar or other unrefined or brown sugar

Preheat the oven to 400 F. Cut up the veggies, garlic, ginger, lemon zest and tofu and put in a 2 quart baking dish with a lid. In a cup, stir the coconut milk, curry paste, soy sauce, salt and sugar. Pour the coconut milk mixture over the roots and toss to coat.

Serve sprinkled with watercress. This keeps well, if you wait to add the fresh leaves at serving time.