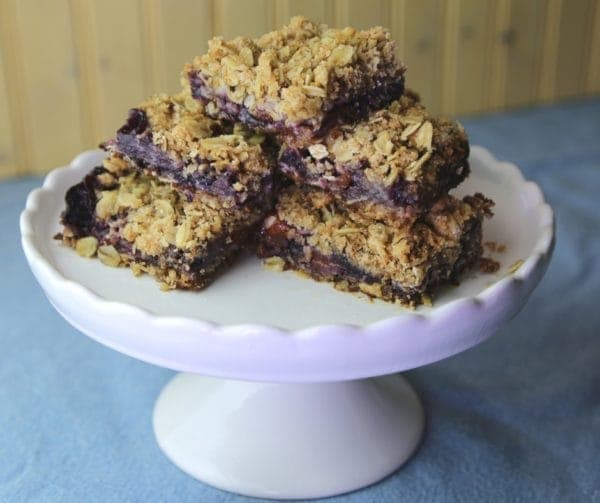 This summer was the summer of road trips. I know I clocked many hours in the car, trekking from Minnesota to Illinois to see my Mother. It’s a journey I’ve made many times, and I have learned a valuable lesson along the way.

Because unless you are a Road Food enthusiast like the Sterns on The Splendid Table, with local dining destinations all mapped out, you are going to get hungry and end up at truck stops and gas stations, looking for a snack.

It’s inevitable. We pull in for gas, and I end up scouting the store for edible food. We have our go-to’s, I’ve almost figured out where the unsweetened iced tea will be in the walls of coolers, hidden among the hyper sweet sodas, energy drinks, and beer. I’ve picked up lots of bags of nuts at truck stops, and the occasional granola bar. I even resort to truck stop coffee, when the podcasts I brought are not enough to keep me alert.

This year, we drove down to pick Mom up and bring her here, and spend a week. My Mother is allergic to wheat, so I always stock up on the flours and foods that she can eat. She is lucky, because she can tolerate Spelt, the ancient form of wheat that differs just enough that it doesn’t trigger her allergies. Ancient Grains are on the rise these days, in part because some of the people who don’t do well with conventional wheat find them easier to digest.

For the rest of us, Spelt is a tasty whole grain with a little less gluten that regular wheat. It is also a little higher in niacin, copper, iron, zinc, magnesium and phosphorus than whole wheat. Depending on which source you believe, it may be 9,000 or 8,000 years old, and was once the main grain grown in Europe. Because the gluten in Spelt is fragile, it’s not as well suited to bread baking, so when wheat varieties with stronger gluten came along, it went by the wayside. nobody bothered to hybridize it, so it is still the same simple grain it was, making it an Ancient Grain.

So for our drive, I wanted to bake a treat made from spelt. Over the years, we have found that whole and white spelt flours work best for her, and when combined, they work just like wheat. If you want to use all whole spelt flour, you certainly can.

I planned ahead and bought some of the locally ground Spelt flour from Baker’s Field flour and Bread, which is about as fresh as I can get it. (You can read my article about Baker’s Field in the Star Tribune here.) White Spelt flour is hard to find, but it is available in bulk at Valley Natural foods and Linden Hills Coop.

I decided to make us a pan of bars to get us through a 9-hour drive together, that Mom could eat and everybody would enjoy. So I chopped up a couple of peaches and mixed them with the blueberries from the farmer’s market, and cooked up the filling. An orange and its zest gave it a little sparkle of citrus. A simple, oaty crust and crumble came together quickly. You can use butter or coconut oil in the recipe, both with great results. If margarine is your thing, that would work, too.

Here’s a link to a Rhubarb Tart recipe that explains the measuring and chilling process for coconut oil. 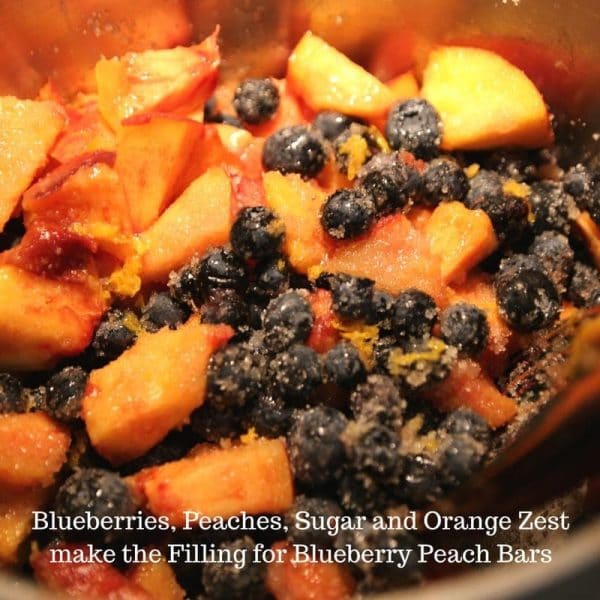 All in all, it was a quick recipe that saved us from succumbing to processed foods on our journey. I packed some avocado sandwiches, water, tea and stuff. I would have brought some organic chocolate, but the last time I did that, it melted in the package.

And yes, I tried to eat it anyway.

So here is the recipe for a bar that you can take on the road, on the plane, or in your lunchbox to work. Simple, easy, and made with Ancient Grains. 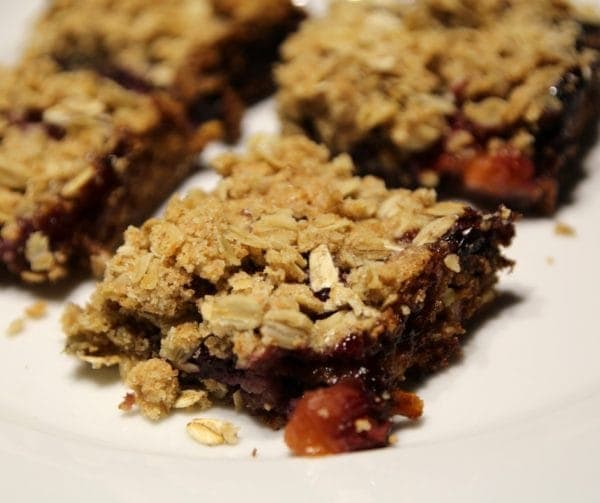 Just sturdy enough to eat in the car

Preheat the oven to 350 F. Grease a 9×13 metal baking pan and reserve.
To make the filling, put the blueberries, peaches, organic sugar, 1/4 cup orange juice and 1 tablespoon zest in a 2 quart pot and place over medium-high heat. Stir until it comes to a boil, then in a cup, whisk 1/4 cup of the remaining orange juice with the arrowroot and stir into the boiling liquids. Stir until the mixture thickens and the liquids become glossy. Take off the heat.
In a large bowl, place the spelt flours, organic brown sugar, soda and salt. Using the coarse holes of a grater, grate in the butter or coconut oil. Mix well with your hands, keeping bits of fat intact but allowing some to melt, just to bind the crumble.
Spread 2 cups of the oat mixture in the prepared pan and use wet fingers to pat it down firmly. Spread the blueberry mixture over the crust, then sprinkle the remaining oat mixture over the filling.
Bake for 50-55 minutes, until the blueberries are bubbling up in spots in the center of the pan, and the topping is golden brown. Cool on a rack, cut 4 by 6, if desired.