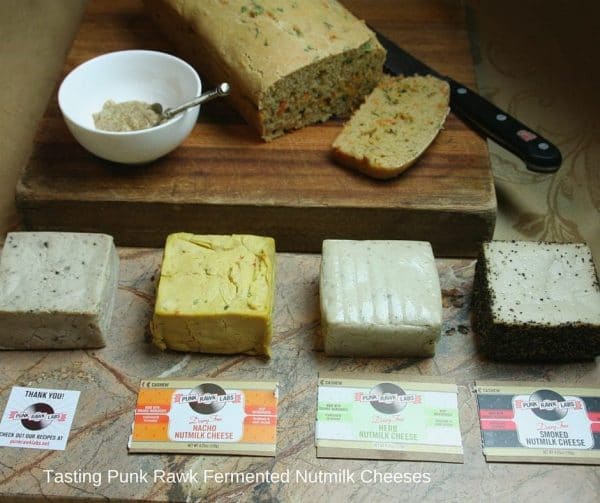 (If you want to win some samples of these yummy cheese, read on down to the bottom of this post.)

A while back, I did a tasting of Miyoko Shinner’s vegan cheeses. But there is more than one cashew cheese fish in the sea, as it were, and I knew I was remiss in not mentioning local vegan cheese makers, Punk Rawk Labs. So when I heard about a new product coming out from Punk Rawk, I thought it would be fun to talk to Alissa Berthel, one of the the founders of Punk Rawk, and to reprise the tasting with the same fabulous cheese professional who lent me her taste buds last time. My good friend Elizabeth Nerud is a Certified Cheese Professional in the American Cheese Society, and she manages a popular cheese department in downtown Minneapolis. 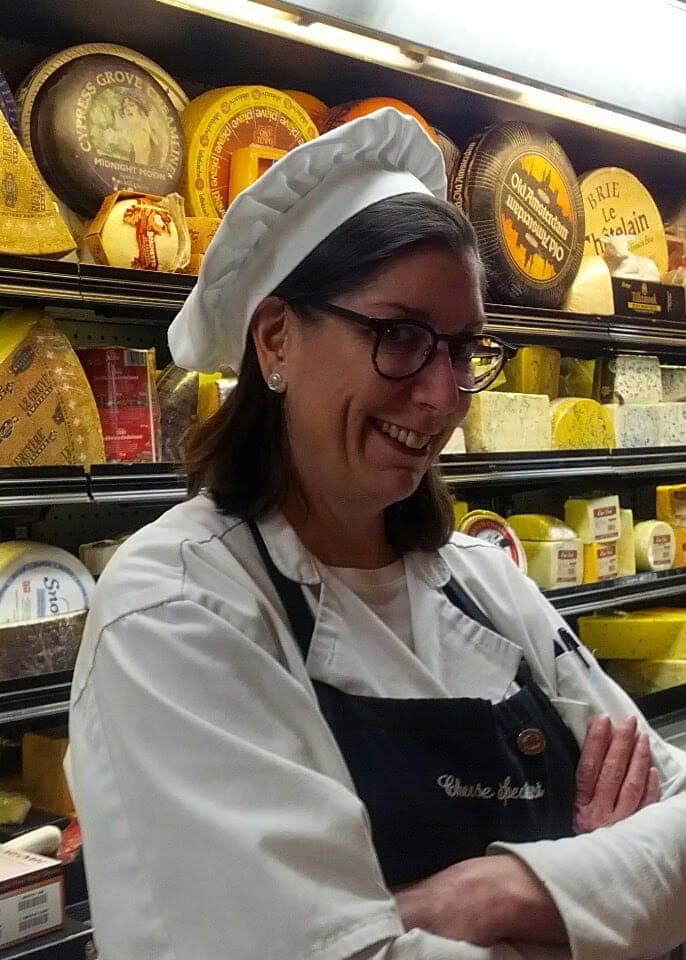 So I baked a fresh loaf of bread and let the cheeses come to room temperature, for a good sampling. 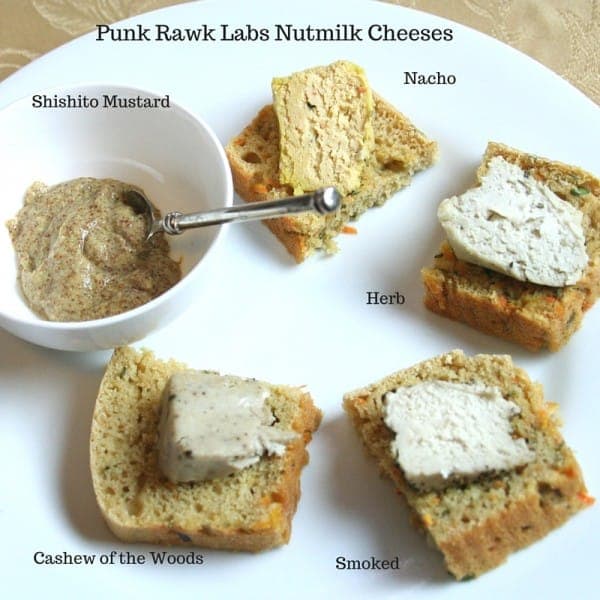 We dug right in the the cheeses. We started with what seemed like the mildest, the Herb flavor.

Liz tasted it, and said: “It smells vegetal, with possibly celery and very gentle fresh herbs. It has sage, rosemary and thyme, and it’s not overdone. Very clean flavor. The more I have the texture the more I like it. It’s not as toothsome as a nut butter, very light but it has substance. Well balanced on the salt.”‘

We moved on to the Cashew of the Woods, a mushroom infused cashew milk cheese. “It has a lovely, lush, cloudlike texture, very enjoyable to put in your mouth. It’s silky, with a bit of a floral flavor at first. The mushroom flavor builds, and it adds a nice savory umami. “said Liz.

The Nacho was the hands down favorite. “It’s nice and spicy, almost a little too spicy, kind of “hello!” with a terrific flavor. You can taste pickled chiles, they give it a nice acidity. I love it.” Liz enthused.

The Smoked was another winner. Liz wanted a little more smoke, but said “It has just a hint of smoke, not too much. I love the pepper coating. There is a lovely mousse-like elegance to the texture of these.”

The Shishito Mustard also made us happy. “Absolutely gorgeous, it has a nice pungency, a vegetal sharpness.” It went well with the bread and cheeses, as a wake up between courses.

Liz summed it up: “These are not like dairy cheese, really, they are completely unique. They are a useful and delightful addition to your cheese and cocktail hour, and so useful for people who want that. The taste like clean, pure, real food, not the chemical shit-show that is in some vegan cheeses I shall not name. They all make a great addition to your sandwich along with the sprouts and carrots. I’m sure the nacho is fantastic melted on chips.” 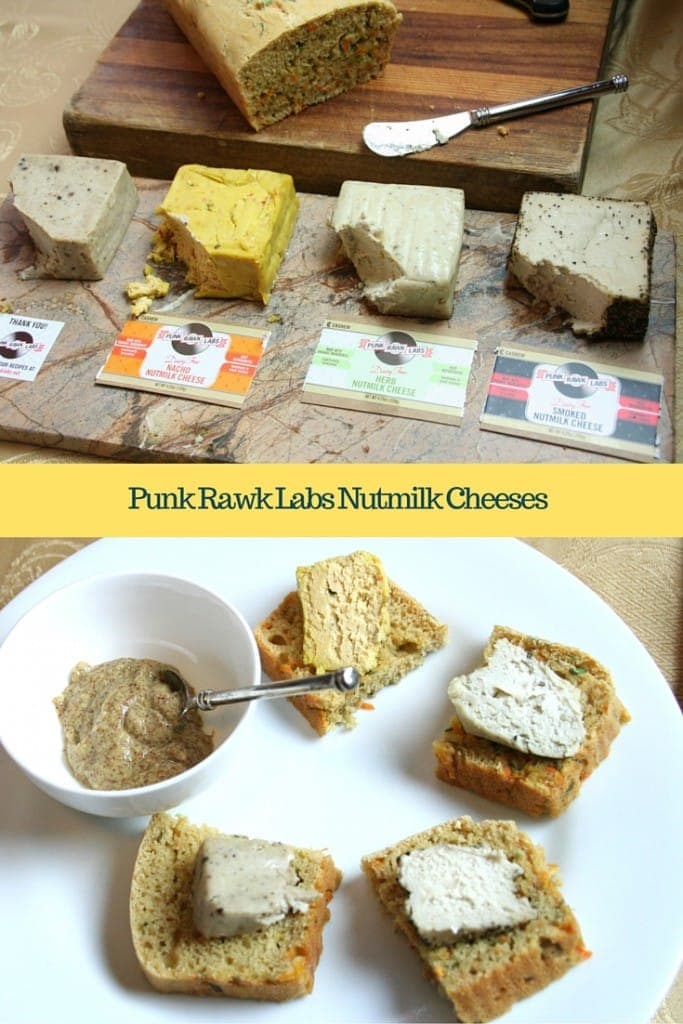 Punk Rawk is a local gem, where Alissa Barthel and her partners, Julie Wellman and Heidi Ochsner (Heidi is based in Seattle) have been selling cashewmilk cheese since 2010. I asked Ms Barthel  about the beginnings of her company.

“I actually used to be a microbiologist, but I was unhappy.  So I went back to working in restaurants.  I had a toxic exposure that caused me to develop an autoimmune disease.  I got really interested in plant based cuisine as it was alleviating my health issues.  My (would later become my) partner, Heidi, was a nutritionist and advised me to avoid dairy.  Then, I got into a serious car accident where I was in physical therapy for about 18 months.  I was very bored.  I started working on the cheese as a physical therapy project.  A store in Manhattan saw a picture of the cheeses on my blog and expressed an interest in carrying them.  They sold out right away.  Then, I started getting contacted by stores all over the country, and things evolved from there.  My partner, Julie, had been helping me for fun.  Because I was on crutches.  It felt like, and still feels like a movie.” Alissa replied.

Her products stand out for a simple list of ingredients and a pure flavor. Fermentation is such an important part of making good cheese, I wondered about her process.

We use cultures.  A lot of homemade vegan cheeses and many commercial ones are closer to spreads in that they are made to mimic the flavor of fermentation with lemon juice or nutritional yeast.  We do use cultures.  There is starting to be a divergence now with how people apply the word ‘culture’ as well.  Some people add culture to the ingredients but don’t actually ferment the cheese.  So ‘cultured’ means cultures are part of the ingredients list but doesn’t necessarily mean the cheeses are fermented.  There are cheeses out there that are considered ‘cultured’ but not ‘fermented’.  Our cheeses are cultured and fermented.” Said Alissa.

Clearly, fermented nutcheese is a vegan ideal, but are there other groups of people who are seeking out this product?

“I have a sensitive immune system.  There are a lot of things I can’t eat.  I can’t eat many of the the commercial non-dairy cheeses.  We get emails from people a lot who say the same thing.  When I look at the ingredients list on many of these cheeses, there doesn’t seem to be anything offensive.  But I don’t feel well after I eat them. I’m kind of like the canary in the coal mine.  But I’ve discovered from doing this that there are a lot of people out there like me.  These are the people who are always really excited to find us.  And this is the main intention behind trying to keep our ingredients list as simple and clean as possible.” Alissa said.

So, if you want to give some cashewmilk cheeses a try, seek out Punk Rawk.  They are online here. Their gofundme page is here.They are expanding their reach and may be coming to a store near you!