Cross-Pollinating Ideas at the Grain Gathering 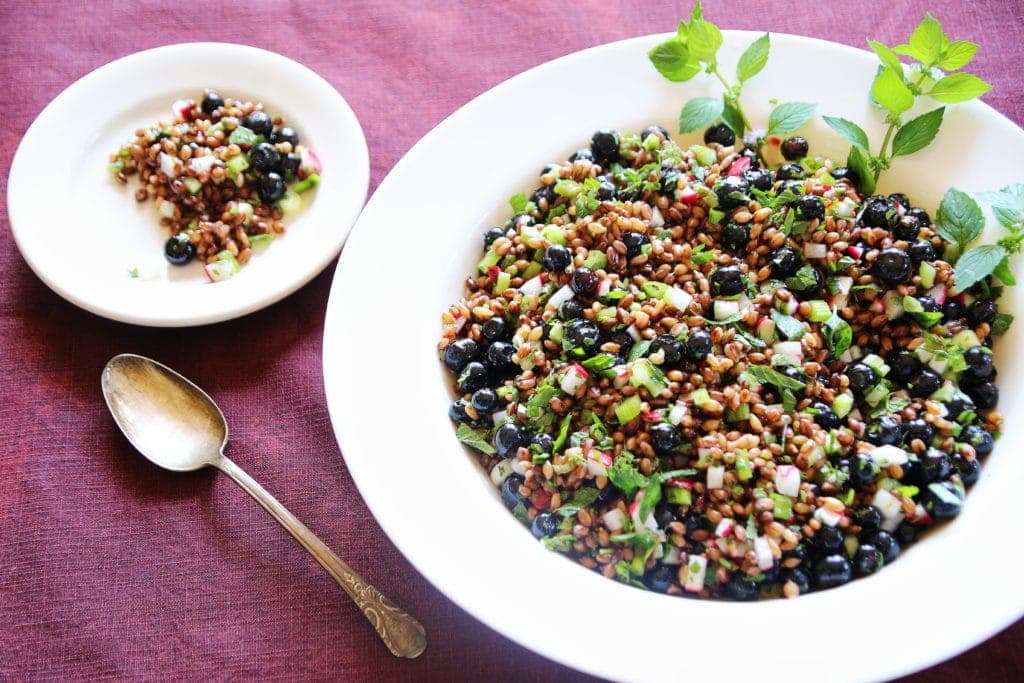 Tibetan Purple Barley and Blueberry Salad for a Picnic

Some people take time off at the end of July to visit a white sand beach.

But there’s no barley at the beach.

Instead, at 3;45 am, I found myself driving in darkness, about an hour North of Seattle, navigating country roads to get to an experimental grain field before dawn. There, as the light spilled over the silhouettes of purple mountains in the distance, I met with 38 like-minded people to follow a visionary through a field. 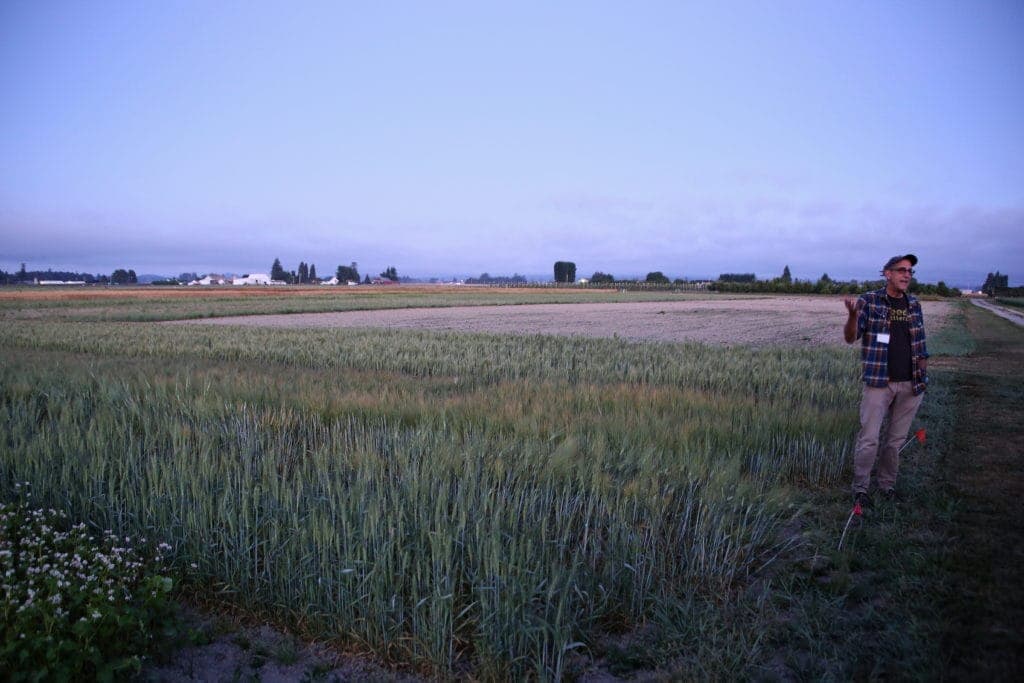 Steve Jones with Buckwheat, Barley and Wheat in the Skagit Valley

Of course, there was more to my trip than that. I was there to spend three days learning about grains, bread, local economies, farm policy, and of course, stuffing myself with swoon-worthy whole grain breads, pastries, and more at the Grain Gathering.

Three Days of All-Grains, All the Time

The Grain Gathering is hosted by the Bread Lab, which is the brainchild of Dr Steven Jones. Jones is the visionary who lead the pre-dawn tour of the fields, and the head plant geneticist at Washington State University. He’s also a leader in the effort to improve the taste, hardiness, and sustainability of wheat and other grains. The Bread Lab is the place where the people who breed the grains, the people who grow them, and the people who bake and cook with them come together, to learn from each other.

And it took a visionary to make that happen.

If you wonder what a bread lab is, it’s basically a bakery with a whole bunch of specialized equipment that is used to analyze the flours and doughs on a chemical level. Big bread manufacturers do this, but in this lab, it’s all about guiding the breeding of grain toward a flour or flake that artisan bakers can make into something with great texture and flavor. The kind of  flavor that makes converts out of white bread lovers, without commodity wheat flour, or enzymes, or chemical additives, just  grain.

Local grain communities have been sprouting across the country, thanks in part to the model started around the Bread Lab. Before this new movement took hold, none of these groups talked to each other, and wheat breeding was all about yield. Growers grew and bakers baked, but wheat kept moving forward with everybody in a separate little bubble.

Which brings us to the Grain Gathering. Since 2011, this annual event has drawn bakers, growers, millers, chefs, cereal chemists, malters, and a bunch of other folks interested in the cross-pollination of grainy information to a beautiful spot in the Skagit Valley.

And there’s beer. It’s made from barley. Tasting beer is serious business, even if it looked like a bunch of people having a good time.

Steve Jones and his grad students maintain the experimental grain fields we toured, where a colorful patchwork of grain plots stretch toward the skyline, each square holding a piece of genetic diversity. There are ancient varieties, grown to study and use for breeding, as well as newer crosses, all carefully tended by the students who will analyze them, conduct tasting panels, and collect all the information necessary to bring better grains to the world.

Jones is passionate about the need to develop grains specific to a region, that will thrive in the conditions there without chemicals or intervention. The end goal is creating local grain economies, in which locally grown grains can be milled, malted, and made into their end products, is a way to keep money in the hands of the farmers and artisans.

And it’s happening, as the sharing and cross-pollination of these ideas helps to sprout local grain economies across the US and Canada, and eventually, the World. 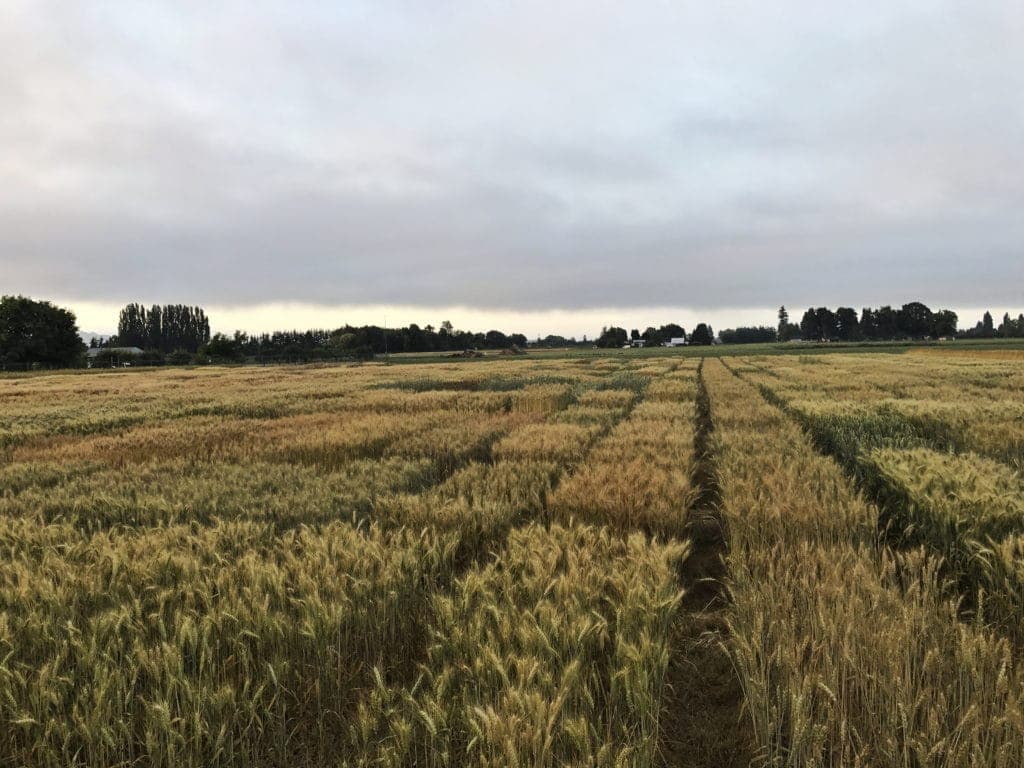 The Waving Wheat, Sure Smells Sweet

Because the Grain Gathering is all about learning more about grains from all levels, from the field to the end product, there is a big emphasis on baking. Classes on pastry and bread formulation and baking are on the schedule alongside seminars on milling, noodlemaking, tasting, malting, brewing, farm policy, and more. 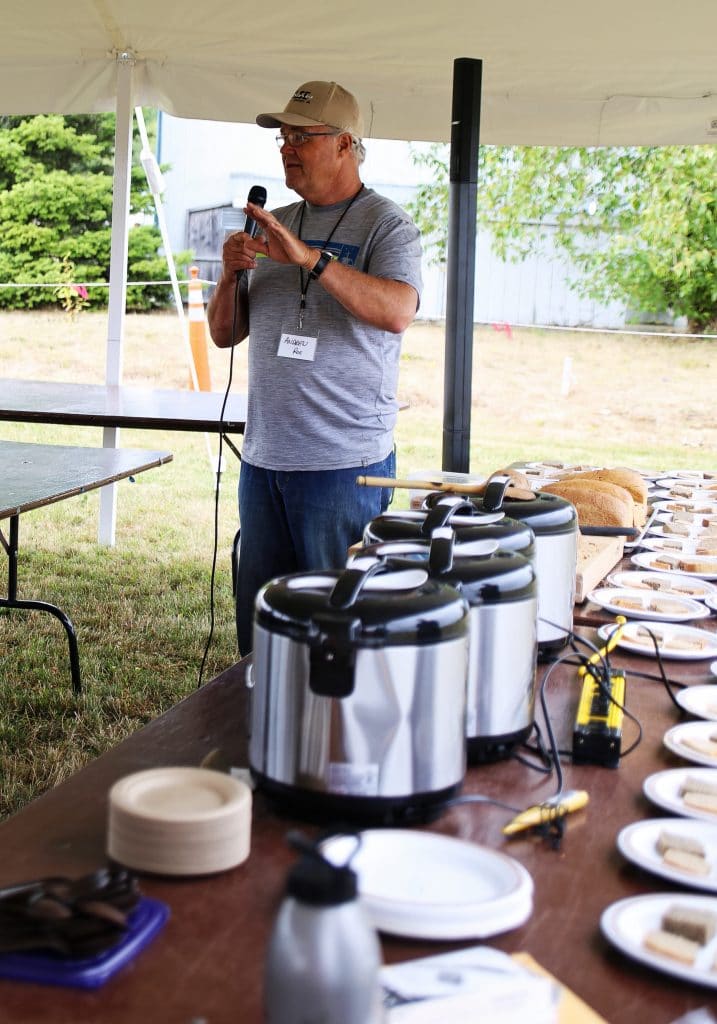 Among the many presentations at the gathering, we had a Sensory Evaluation of barley breads, crackers, cooked grain, and roasted barley tea. Another visionary, Andrew Ross, a cereal chemist and grain breeder who runs a Bread Lab at Oregon State, is also working on improving barley and finding ways to use it. He and WSU PhD student Brigid Meints shared barley info, and we all sniffed, savored, and rated the barley based foods.

It was a scientific way of quantifying our subjective opinions, and it was fascinating. 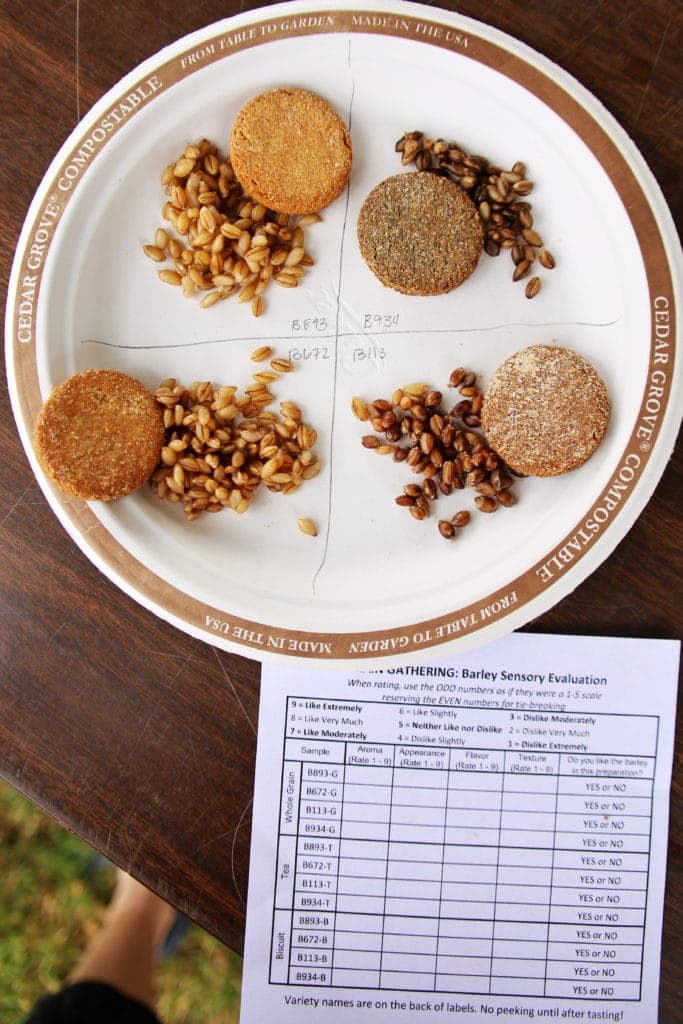 Mystery Barleys and Biscuits to Taste and Rate

Because I was invited to present at the Grain Gathering this year, the cross-pollination included a few of my ideas.I knew that a crew of world-class bakers would be there, teaching and sharing their knowledge, so I put together a menu of desserts that you make on the stove top that feature the uniquely beautiful and flavorful barleys grown in the Camas Valley. 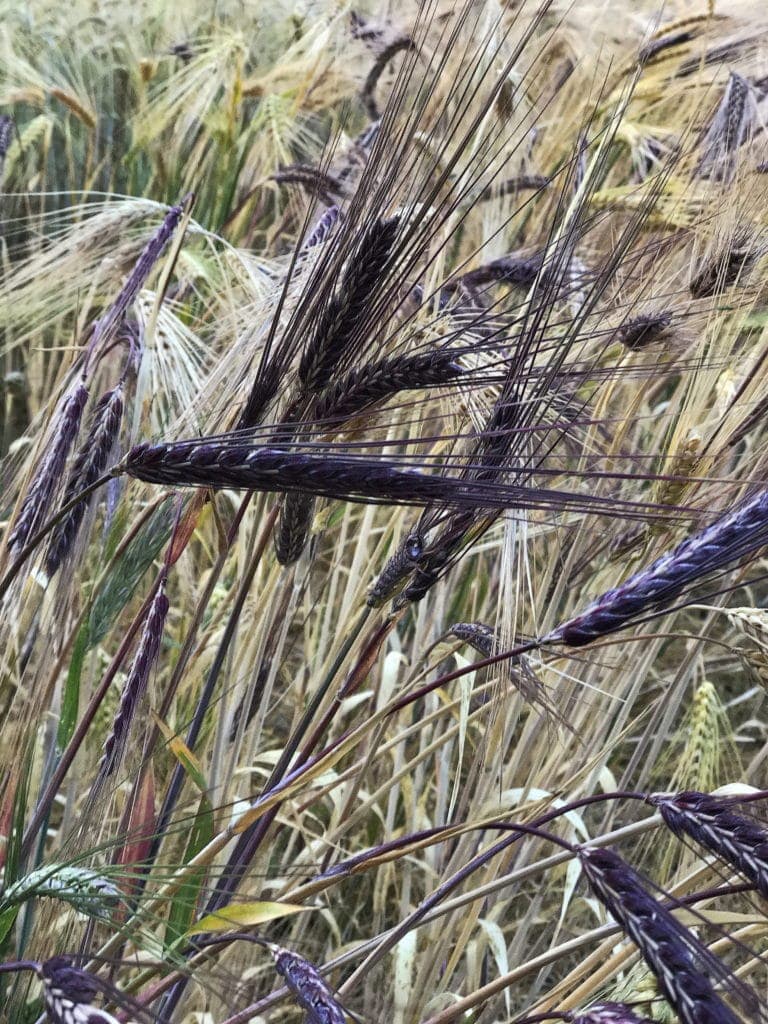 Purple Tibetan Barley in the Field

I’ve already posted one of the recipes that made the cut for my demonstration at the Grain Gathering, the Barley Pudding. Playing around with the barley from the Bread Lab lead to Rhubarb Barley Bars, Barley Chocolate Chip Cookies, Barley- Raspberry Muffins, and a Purple Barley Smoothie Bowl.

So, as I slowly digest all the information and experiences of the Grain Gathering, I give you another purple barley recipe. I needed a salad to take to National Night Out, and I wanted to make something beautiful that all my neighbors would try. Blueberries seemed like a good companion to my barley, and the fact that both are colored by the purple antioxidant pigment anthocyanin didn’t hurt. Crisp, peppery radishes give it a pop of red and some kick, and parsley and mint a cooling, herbal flavor.

Knowing where your food comes from gives you a whole new understanding of it, at the most basic level.

If you want to try the beautiful barley I used in this recipe, order it here. It’s gorgeous stuff.

I hope you’ll seek out some whole, naked barley, or any grain that’s been grown in your area. I’m lucky to be able to buy local barley in bulk at my Coop, and if you look around you might find locally grown grains where you are, too. We can support that local grain economy, and keep a farmer in business, while enjoying a tasty dish.

Think globally, act locally is more than a slogan, it really works. We can watch that come to fruition with grains, thanks to people like Steve Jones, and the many players at the Grain Gathering. 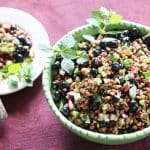 Tibetan Purple Barley and Blueberry Salad with Radishes and Mint

Beautiful Purple Barley is a delicious, filling grain to use in one bowl salad meals. For a main course, throw in a handful of walnuts or a crumble of goat cheese.
Servings 6
Author Robin Asbell 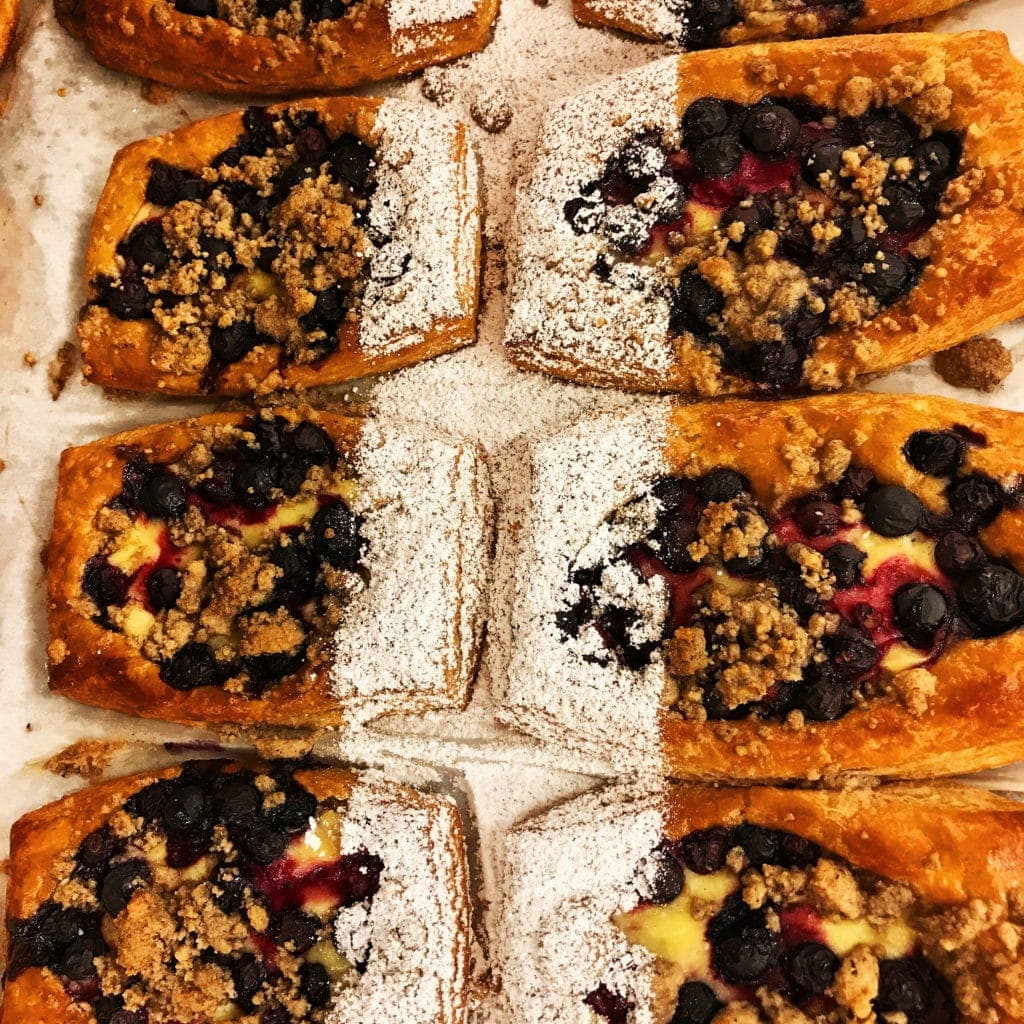 The Crumble on Top is Made from Buckwheat Flour 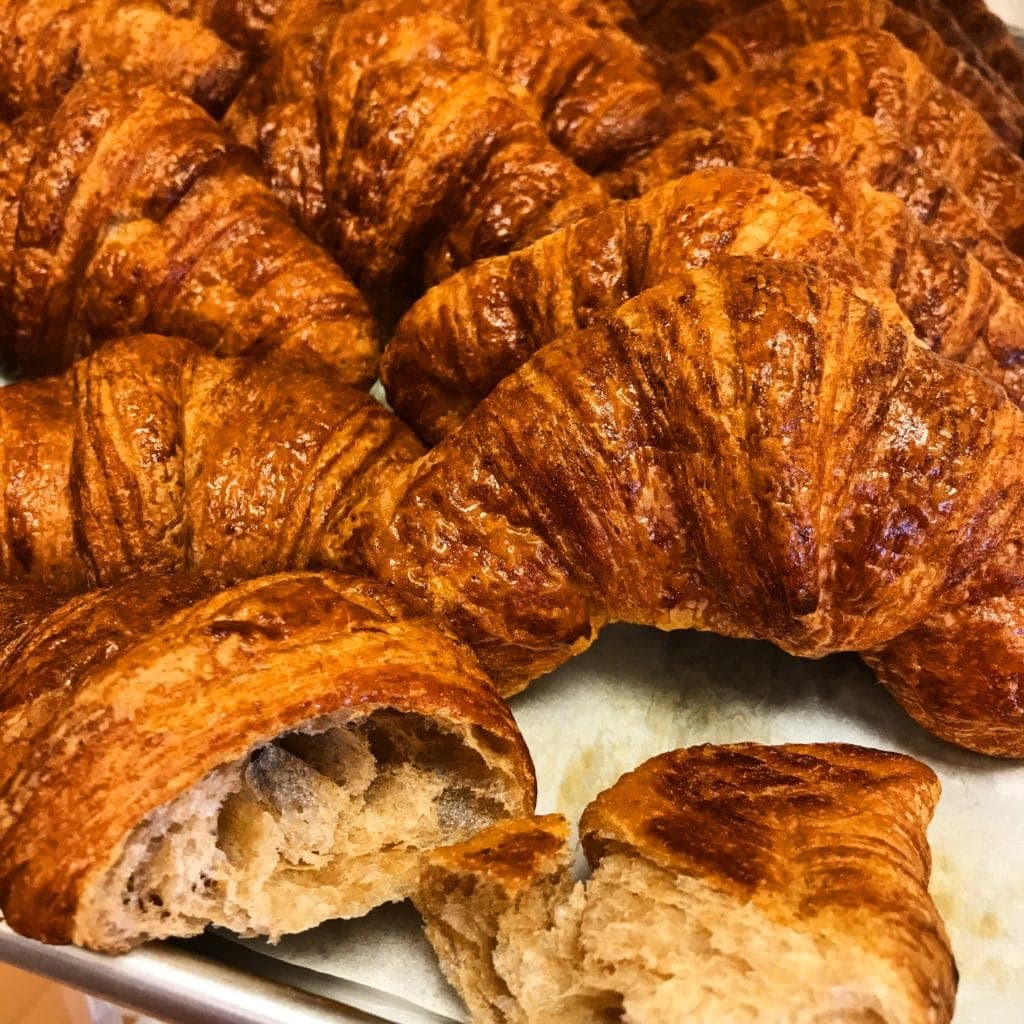 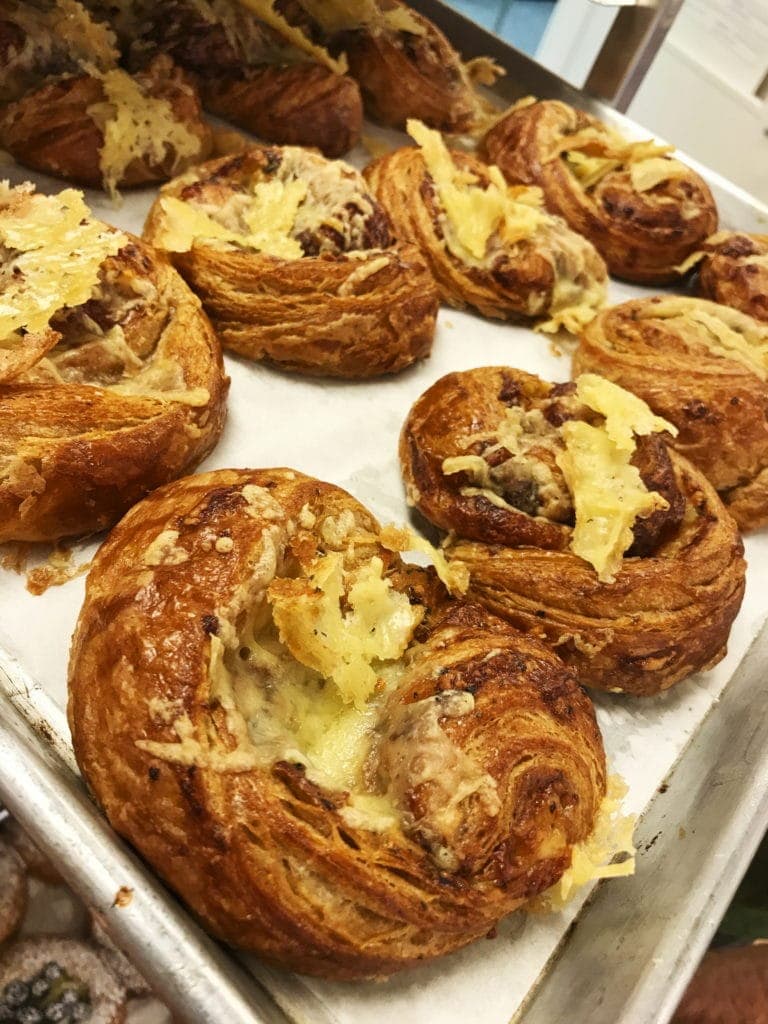 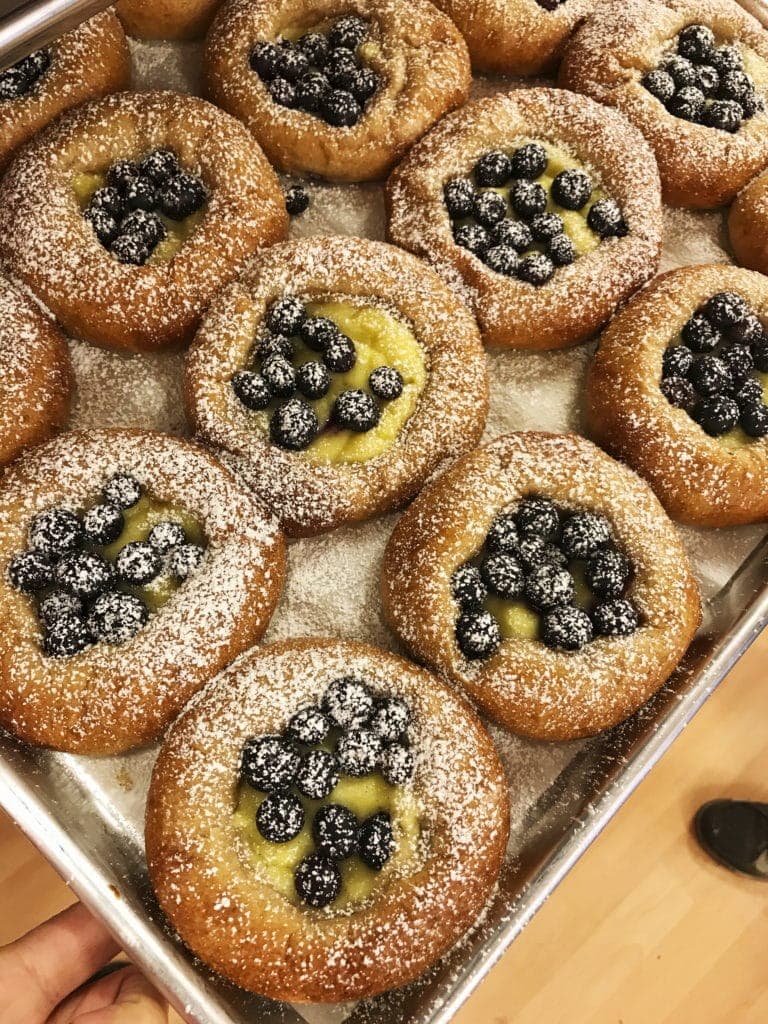 A Puddle of Custard, Dappled with Berries 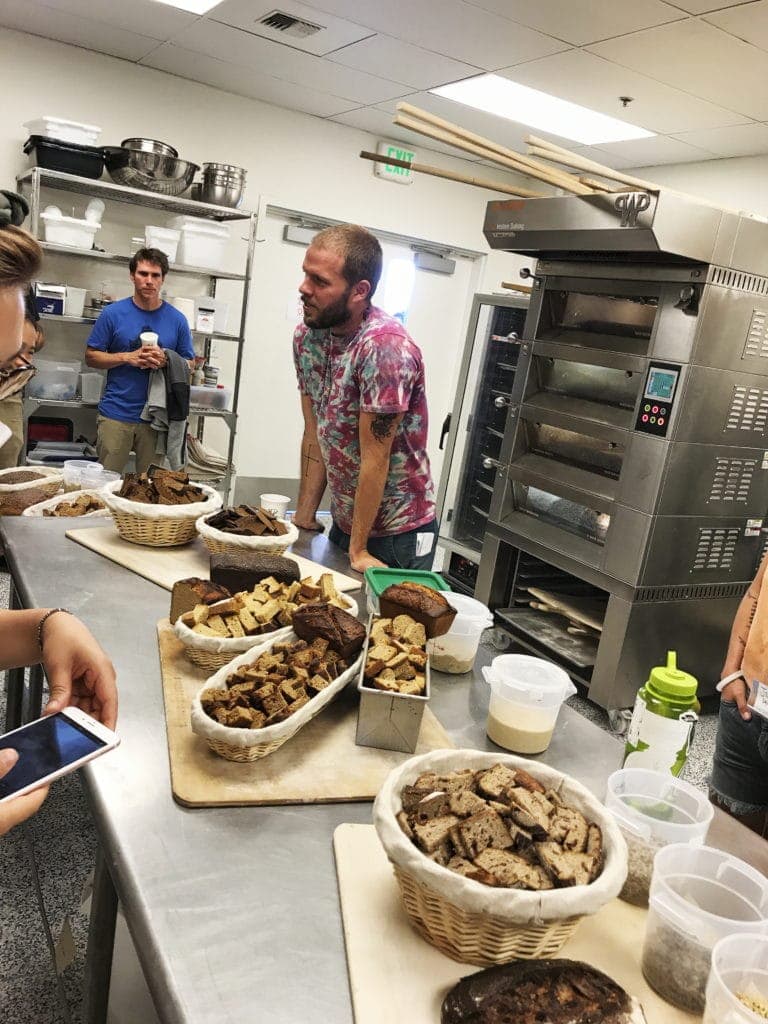 Josey Baker, Cracked, Sprouted and Ground Grains Seminar, and Many Samples to Taste 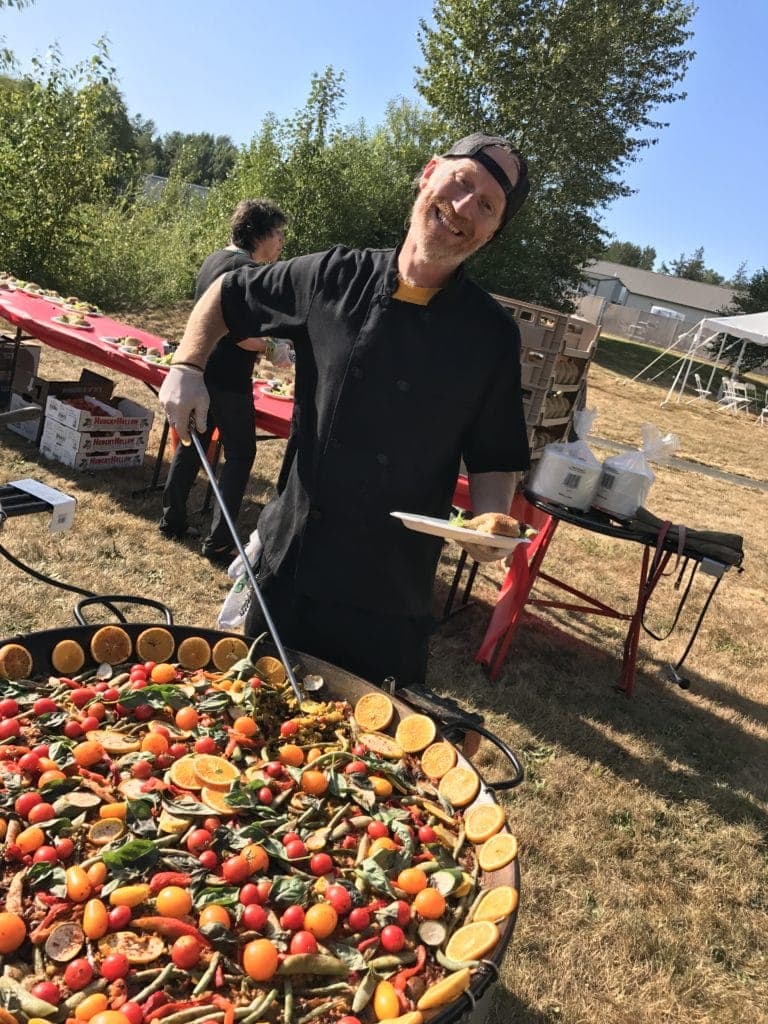 Paella Works made a Vegetarian Paella