Baby it’s hot outside. That’s why we all crave a creamy cold treat like this easy no-churn Creamy Almond Ice Cream. Sure, you could buy ice cream, but when it’s this easy to make, I think it’s worth doing it at home. Especially because this one avoids the hard texture that many no-churn ice creams have with the ingenious and amazing addition of whipped aquafaba.

Aquafaba, also known as the liquid you have been draining off of channed chickpeas and pouring down the drain, is the secret to the success of this delicious dessert. By whipping aquafaba to a meringue-like loft, you can incorporate it into a rich mix of coconut cream and almond butter, to give it a texture similar to churned ice creams. Really. Most non-dairy no-churn ice creams are plenty creamy, but when frozen, become a hard block. This one can be scooped straight from the freezer, without having to sit and soften at room temperature.

Whipping the aquafaba takes 4 minutes, but otherwise, this is about as quick as a homemade dessert gets. As the proud owner of a real ice cream maker, I can tell you that it takes much longer to make ice cream that way. First you make the ice cream base, chill it completely, then the churning takes half an hour or so. So, this little trick makes it much quicker to get some good, real food ice cream into my bowl.

Enjoy your ice cream, summer is short and you might as well savor some sweetness! 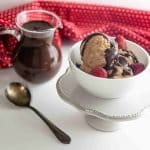