A Great Vegetarian Dish from the New Southern Latino Table 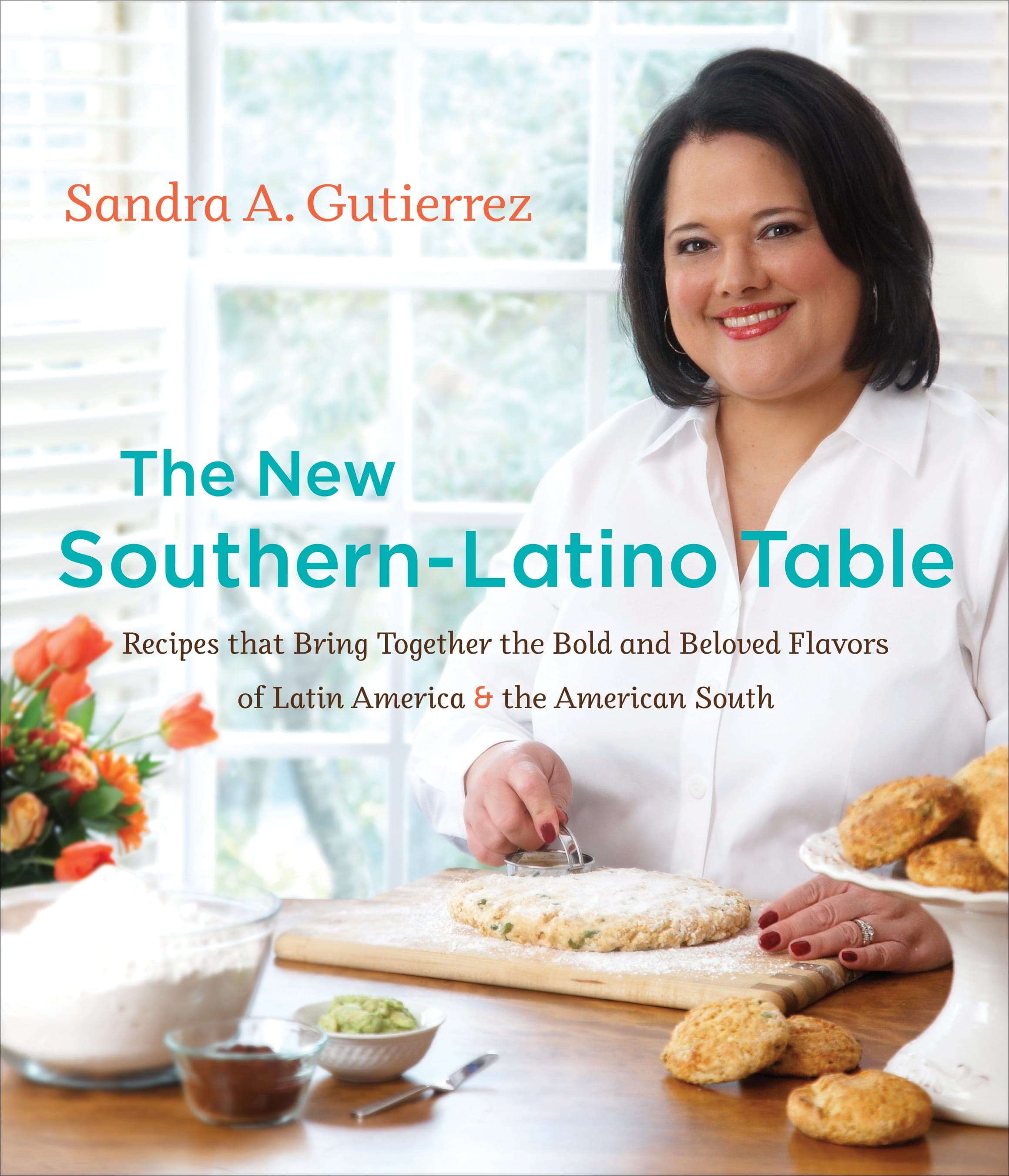 It’s a great big world out there, and as people move around in it, they bring their cultures and cooking with them. Cuisines evolve, living and breathing along with us. New traditions are born. When a talented chef grows up moving between cultures, absorbing and reinterpreting cuisine as she goes, you can bet there will be some tasty results. When that chef is Sandra Gutierrez, the tasty results are the creative recipes, gorgeous photographs, and enticing prose in her new book the New Southern Latino Table (UNC Press).

Sandra Gutierrez has taken a path that started in the US, went to her parents’ homeland of Guatemala, looped up to Canada, and ended up in North Carolina. Along the way, she learned to cook her native dishes at the side of her Aunt, traveled a lot, and learned more about Latin cooking, even as she absorbed the multicultural foods all around her. She also noticed that the South was home to a whole collection of Latinos, from all the countries south of the border, and they were creating a new kind of cuisine in their adopted homeland. From this realization came the New Southern Latino Table. This cuisine is bigger than Sandra’s home cooking, encompassing the evolving food styles of all her Latino brethren. It’s a beautiful book, and Sandra clearly embraces both the food of her origins and of her current home, and composes from their palette thoughtfully and affectionately.

When you take a forkful of any given dish from this book, you might be tasting Guatemala, Mexico, and Mississippi Delta in one bite. Or Peru via New Orleans, or Brazil with a soupcon of Creole. It’s exciting stuff, delicious at face value, but fun to analyze a little bit, to see which influences she’s whisked together this time. That’s why I wanted to share her recipe for Causa Vegetariana, and the thinking that went into its creation.

I asked Sandra to tell me more about the origins of the causa, a Peruvian dish.

“Potatoes are native to Peru and they have dozens and dozens of varieties and colors of potatoes there. You find causas all over Peru and it’s one of their most famous dishes, along with ceviche. There is a Southern element in my causa because I took the elements of a classic Southern potato salad and de-constructed it; then I built it in the shape of a causa.

All causas have these things  in common: first the potato part is always enhanced with lime and chile ( traditionally with the Peruvian aji Amarillo). Second is that they are always stuffed with a mayonnaise based salad which can be made with anything you want: other veggies only, seafood, or meats. But the one I made with egg salad is new and I pulled from southern elements in traditional potato salad. Causas therefore can be vegetarian but many times are not.” Said Gutierrez.

See what I mean, about the thought process that went into building this dish? It’s not the kind of thing most cooks can pull off with such skill and familiarity. That comes from years of crossing and mingling cultures and cuisines, and a rare ability to work both analytically and intuitively. The book is full of recipes like Chile Cheese Biscuits with Avocado Butter, Coconut, Chayote and Corn Bake, and Chile Chocolate Brownies, all of which make mouth-watering use of New Southern combinations.

Since this vegetarian version is a brand new creation, I asked Sandra how vegetarians would fare south of the border, in places like Peru and Guatemala.

“There are many vegetarian dishes in Peruvian cuisine but mostly, each Latin cuisine features a huge array of plant-based dishes. Vegetable Escabeches( pickles), rice and bean based dishes such as Nicaraguan Gallo Pinto, fruit smoothies (sometimes called aguas or batidos), and a wide selection of salads are traditional to Latin American cuisine in general.”

Maybe I need to make a trip to North Carolina, to get a taste of this Nuevo cuisine. Pimento cheese and collards never sounded so appealing! 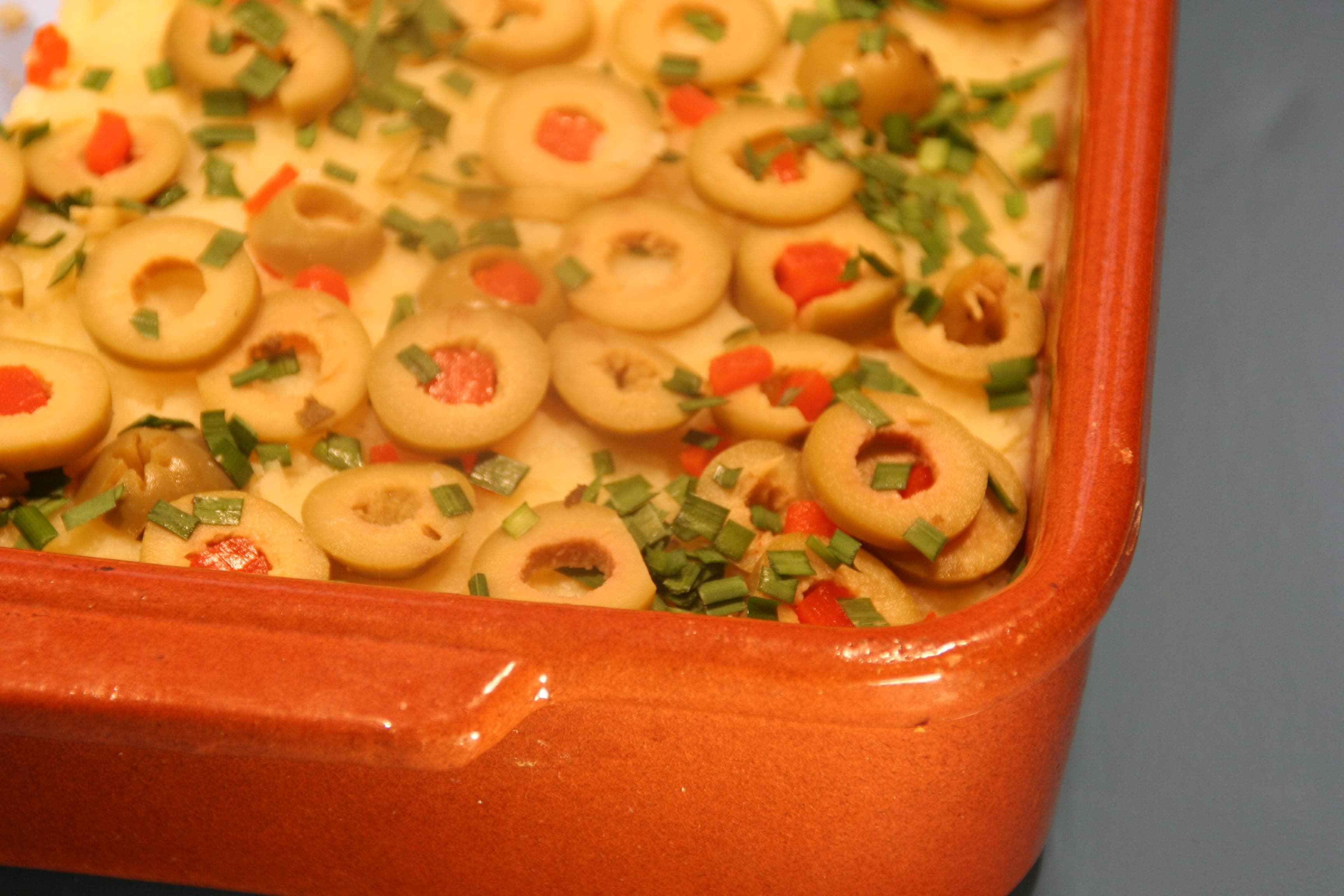 The Causa, Ready to Slice!

This is Sandra’s version of the causa. Like a potato-based egg salad sandwich, this causa will definitely wake people up at your next potluck, with its zingy lime-chile potatoes and a generous topping of olives. Vegans can use crumbled tofu instead of eggs for the filling, and with vegan mayonnaise, you can enjoy this creative new party dish!

For the Potato Layers:

For the Egg Layer:

Spray or oil a 9x13x2 inch casserole. In a large bowl, combine the potatoes and onion and stir. In a medium bowl, combine the lime, aji or hot sauce, salt and pepper and whisk, then whisk in the olive oil. Pour over the mashed potato mixture and stir to mix well. Divide the mixture in half and press half in the pan, reserving the rest.

In a medium bowl, mix the eggs, chopped olives and capers, mustard, pepper and salt. Spread over the potato layer. Cover the eggs with the remaining potatoes and gently spread to an even layer. Garnish with sliced olives and chives, then cover and chill for at least an hour and up to 14 hours. 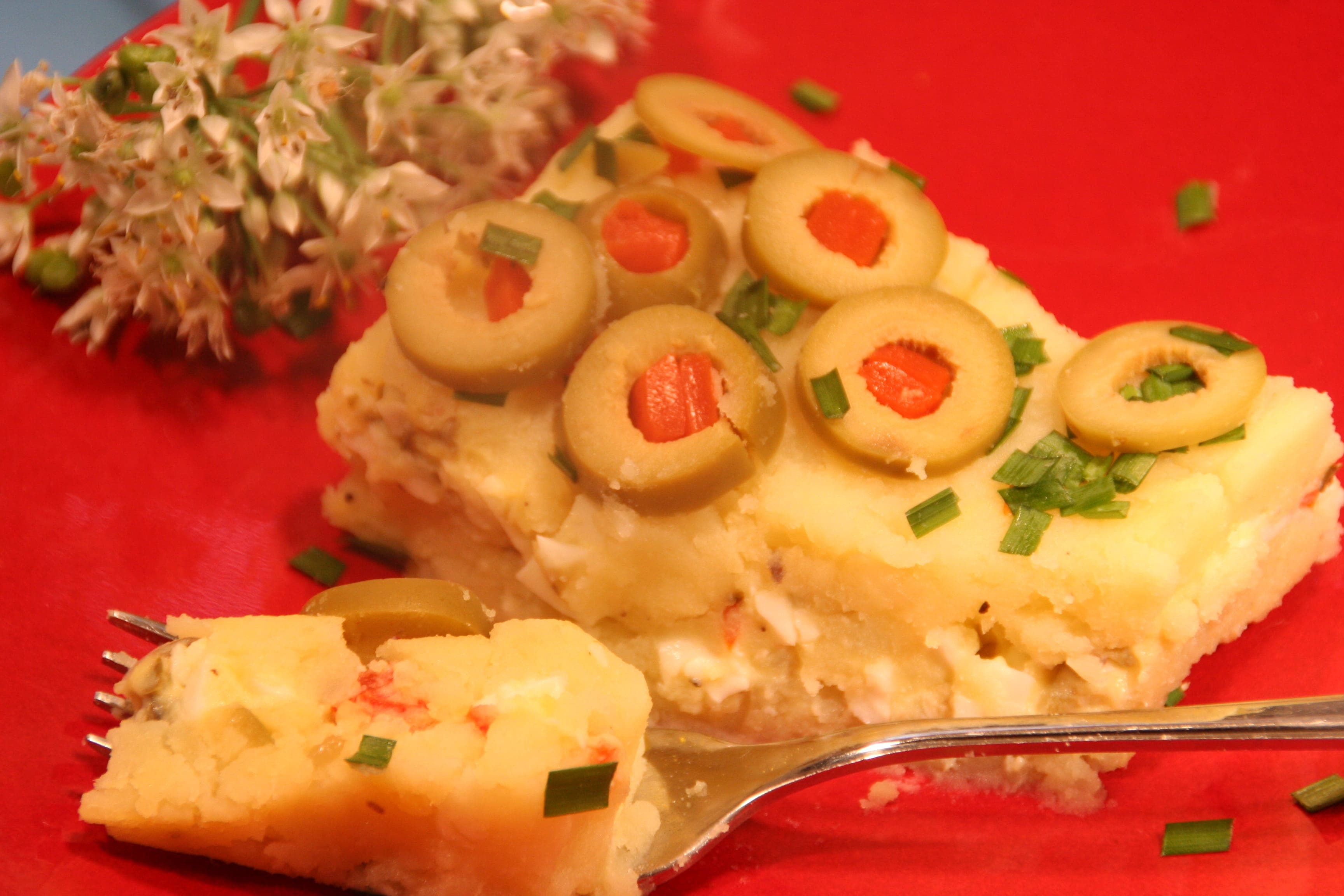 If you like the sound of this recipe, check out the other blogs that are participating in the potluck One is not vegetarian, but you can probably mock it up)

If you missed out on our first dinner party, here’s what we ate:

Peach Salsa, prepared by Tara Mataraza Desmond of Crumbs on My Keyboard
Chicken Enchiladas with Tomatillo Sauce, prepared by Jill Warren Lucas of Eating My Words
Pecan Rum Cake with Figs, prepared by Amy Lewis of The Practical Cook