Savor Summer with an Easy Plum Cake with Neat Eggs 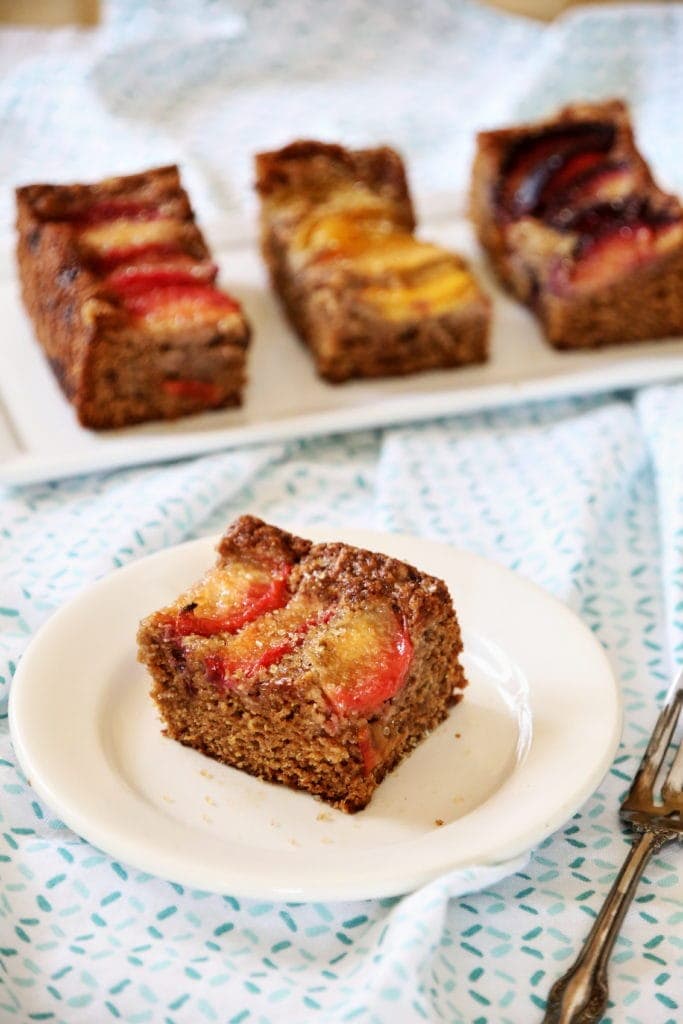 A Fruity Snack Cake for Any Time of Day

As a recipe developer, I’ve always got a list of recipes to create. Every recipe is like a little chemistry experiment, which has to work physically, as well as taste good. I’ve been lucky enough to write nine cookbooks, all while writing recipes for magazine articles, websites, and private clients. I cook, I bake, we eat, and I start all over again.

Recently, I’ve been on a run of savory recipe work, and found myself gazing at pictures of desserts with lust in my heart. So when a package of Neat Egg egg substitute arrived on my stoop, I knew I had to make a vegan cake. With whole grain flour, of course.

The Neat Egg is right up my alley, since it’s made from nothing but chia seeds and chickpea flour. Whole, nutritious food, not a bunch of starch or refined stuff. I’ve always been partial to ground flax and chia for vegan baking. Both seeds, when ground to release starches and fiber, can be mixed with liquid to form a thick gel. That gelling quality helps trap air and create structure in baked goods the way that eggs do.

I spoke to Laura Lapp, the founder and creator of Neat Foods, about her nifty Neat egg subsitute and the line of meatless meats she has created, and it’s sold by Atlantic Natural Foods.

Lapp is a lifelong vegetarian who was raising two daughters as omnivores, when the two girls decided to go veg, too. ” My girls were 4 and 7 and saw something on TV and decided to go vegetarian. I was so used to making them spaghetti and meatballs or tacos that for a while we just ate pasta with tomato sauce because I didn’t know what to do for protein.” said Lapp.

She looked at the meat analogs on the market, and didn’t like what she saw. “I got scared off by the chemicals, it was like feeding fruit loops to my kids, except it was a veggie burger.” So she started working with beans and nuts to develop some good subs for the meatballs and taco meat she had been feeding her girls.

“Kids are the worst critics,” said Lapp, but after many attempts, she got the thumbs up. “My daughter said, ‘It’s not meat, it’s neat.’ and that became the name of my company.”

The Neat Egg came along later, and now she has a whole line of baking mixes ready to launch. “It’s my new baby. We have a black bean brownie, a cowgirl cookie with pistachios and cherries, all keeping with the idea that Neat is clean. No extra additives, just real food. They are all soy-free, gluten-free and vegan, too.”

The Neat Egg is a convenient way to bake without eggs, since the seeds are already finely ground and blended with chickpea flour for a bit of that aquafaba magic. It’s an easy egg substitute you keep in the pantry. 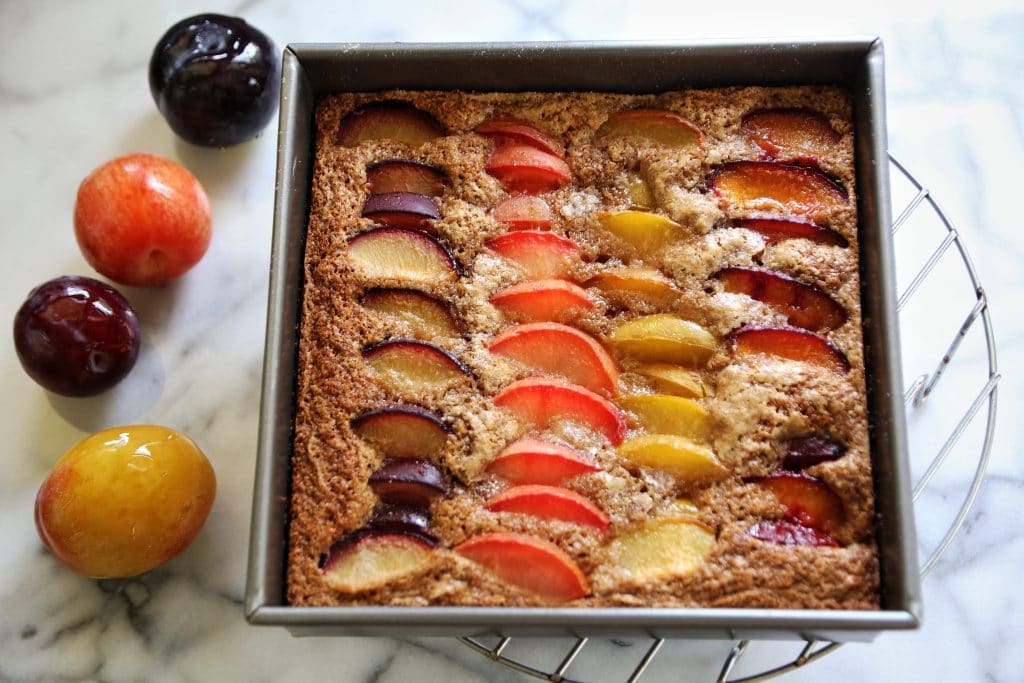 When the Plums are in Season

For this cake, I picked up four kinds of plums and pluots at my Coop. Ranging from the dappled green of the “Flavor Grenade” pluot to a deep black plum, they were perfect for displaying on top of a cake. I am lucky to have access to Bakers Field Flour and Bread’s soft white whole wheat flour, but you can use whole wheat pastry flour. If you’re baking for a tough crowd, you can always use half unbleached flour, for a lighter cake.

Putting fresh fruit and a sprinkle of crunchy sugar on top of the cake is just as appealing as frosting, but much better for you.

Keep an eye out for Neat Foods products wherever you live, because “It’s not meat, It’s Neat!”

Colorful sliced plums tile across the top of this easy cake. It only take a few minutes to make, and is 100 % whole grain. If you want to use part white flour, sub in half a cup.
Course Dessert
Servings 8
Author Robin Asbell