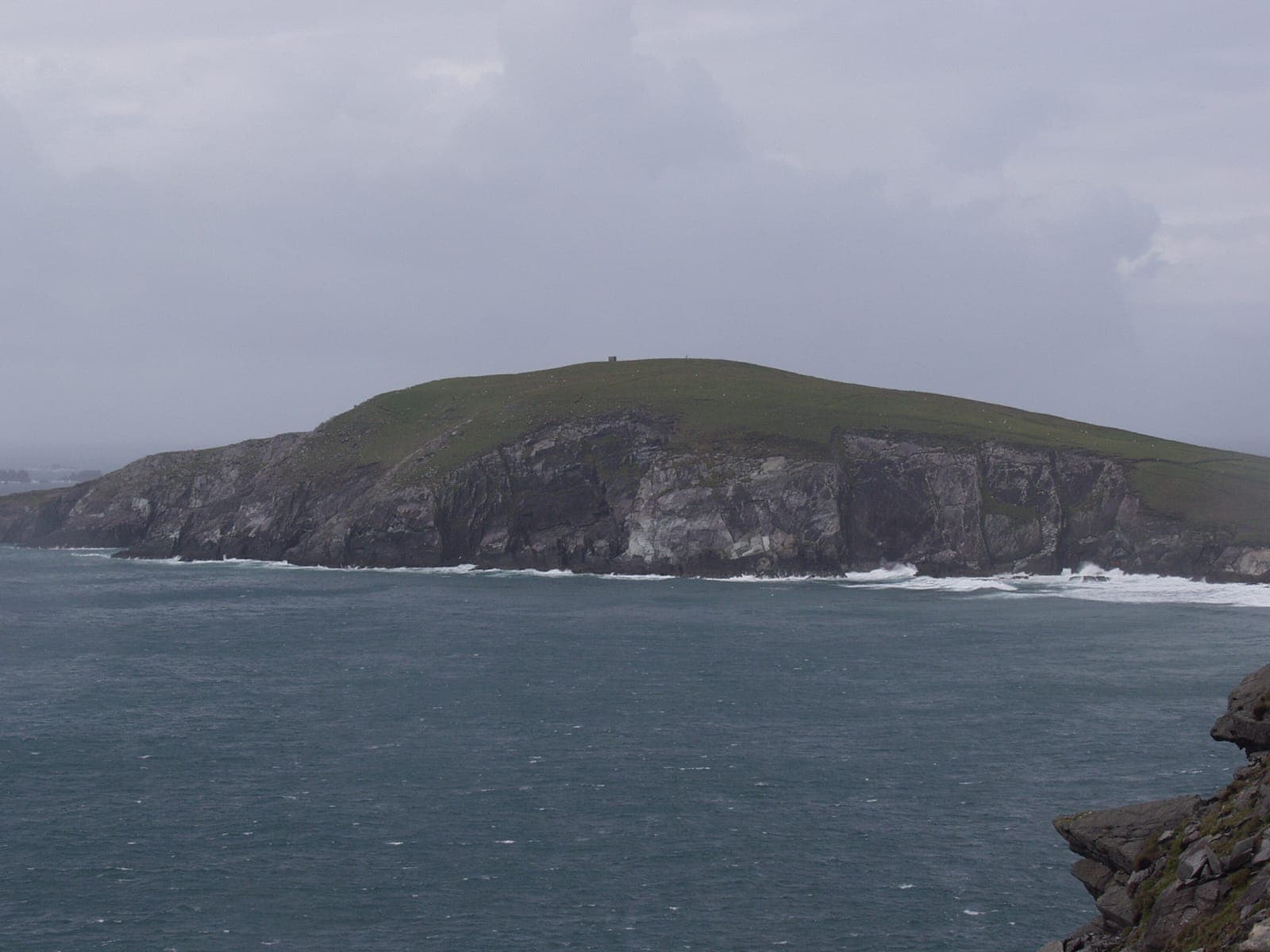 First things first, I’m not Irish. I have some Scottish blood mixed with my all-American mutt lineage, which may make me a stone’s throw from it. But when St Paddy’s Day rolls around, we can all be Irish for a day. The idea of a simple, rustic cuisine based on local, peasant ingredients appeals to everyone. For vegetarians, well, we skip the corned beef and go straight to the cabbage.

The story of the potato famine is well-known, a lesson we have been learning over and over since pre-history. A population dependent upon a single crop for its survival was devastated by a blight on that crop, and people were left with nothing to eat.

If you read the history of this terrible time, you’ll understand two things. One is why the Irish have been so angry with the British for so long. The second is that hunger in this big world is always politically based. During the famine, wealthy British landowners continued to grow crops for export, filling warehouses and ships with grain while Irish families starved and died in the streets outside. The British government did little to help, insisting that bailing out the people would create dependency, and preferring to follow a “laissez faire” philosophy. There was plenty of food to be had, if the people in power had been willing to bring it.  Thousands of people died.

Pretty good reason to drink some beer, huh? Well, while you’re Irish for a day, raise a glass to the indomitable spirit and strength of the Irish people. Maybe the next time you get a letter from an organization fighting hunger, consider eating potatoes and cabbage for a week and donating what you save on food to help.

I’ve always thought it was a tiny bit of justice that the foods that were relegated to peasants were often secretly nutritious. The 1% have historically lorded it over everyone by eating lots of meat and fat, while the hard working farmers were left eating plant foods. Of course, it’s cold comfort to know your greens prevent cancer if you are starving, but we have to look for something positive in all this. 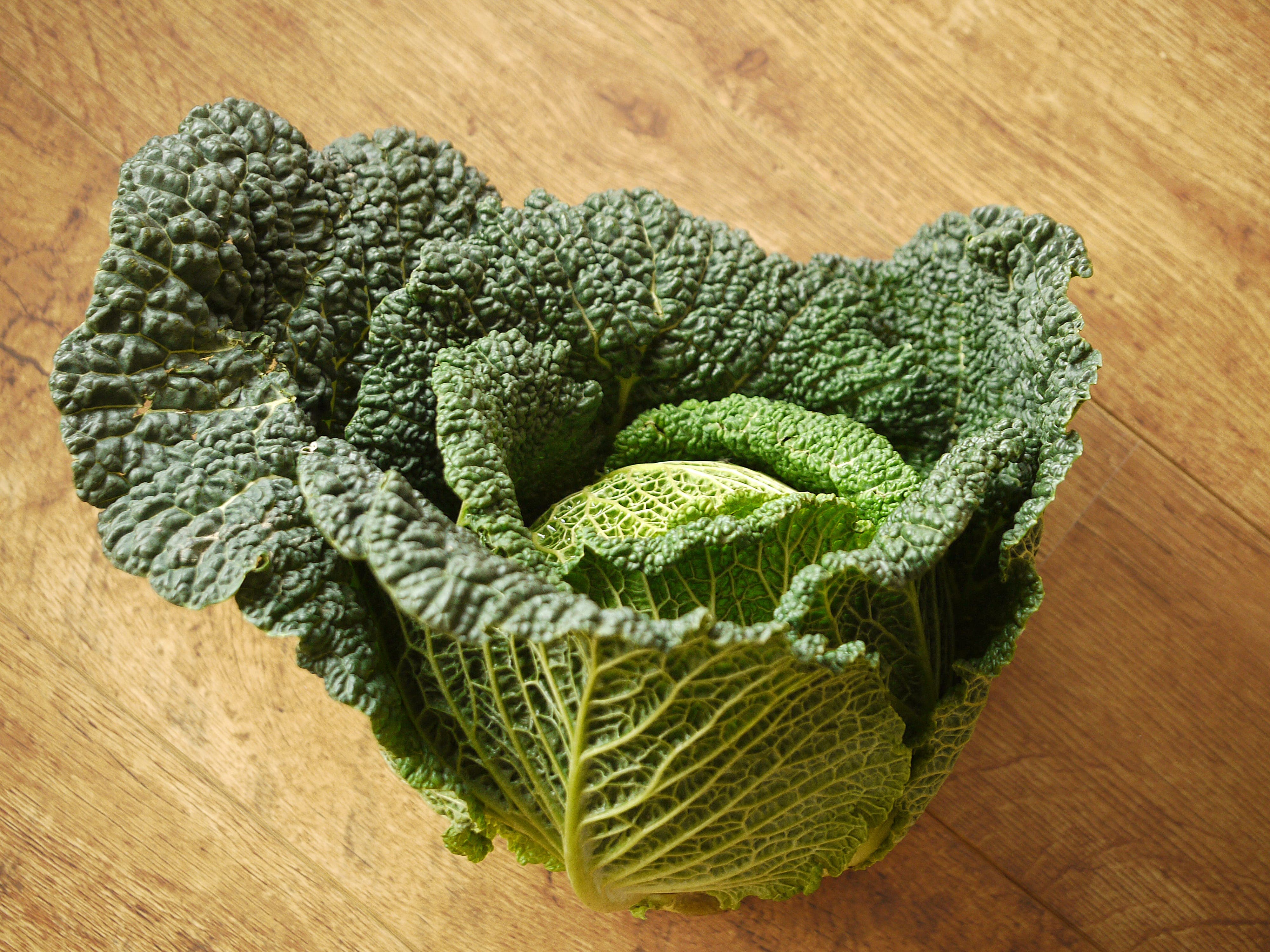 So for St Patricks Day, let’s celebrate the lowly root vegetables and cabbage. Traditional potato dishes, like Boxty, a mash of potatoes with butter and scallions, are the kind of rib-sticking, easy food that fuels physical labor. Today, I thought it would be fun to eat a version of Colcannon, another classic Irish dish. Instead of white potatoes, I’m going to up the nutrition with a big sweet potato, and celebrate the cabbage, the most peasant of all peasant foods. Of course, you can use potatoes, too.

Yes, in a karmic payback, the cabbage that was fed to peasants and livestock is now known to be a superfood. Like all members of the brassica family, cabbage has a slew of anti-cancer chemicals and antioxidants. Cabbage offers up something called glucosinolates, which are allies in preveting colon, prostate and bladder cancers. Common cabbage is also rich in polyphenols, which are both anti-inflammatory and antioxidant chemicals.  Cabbage also lowers cholesterol and helps create a healthy environment in the digestive tract, keeping good bacterial balance.

Cabbage is high in vitamin C, but really stands out for providing 66% of the vitamin K you need in one cup. It’s one of those very low-calorie foods that you can eat lots of to feel full and satisfied without gaining weight. 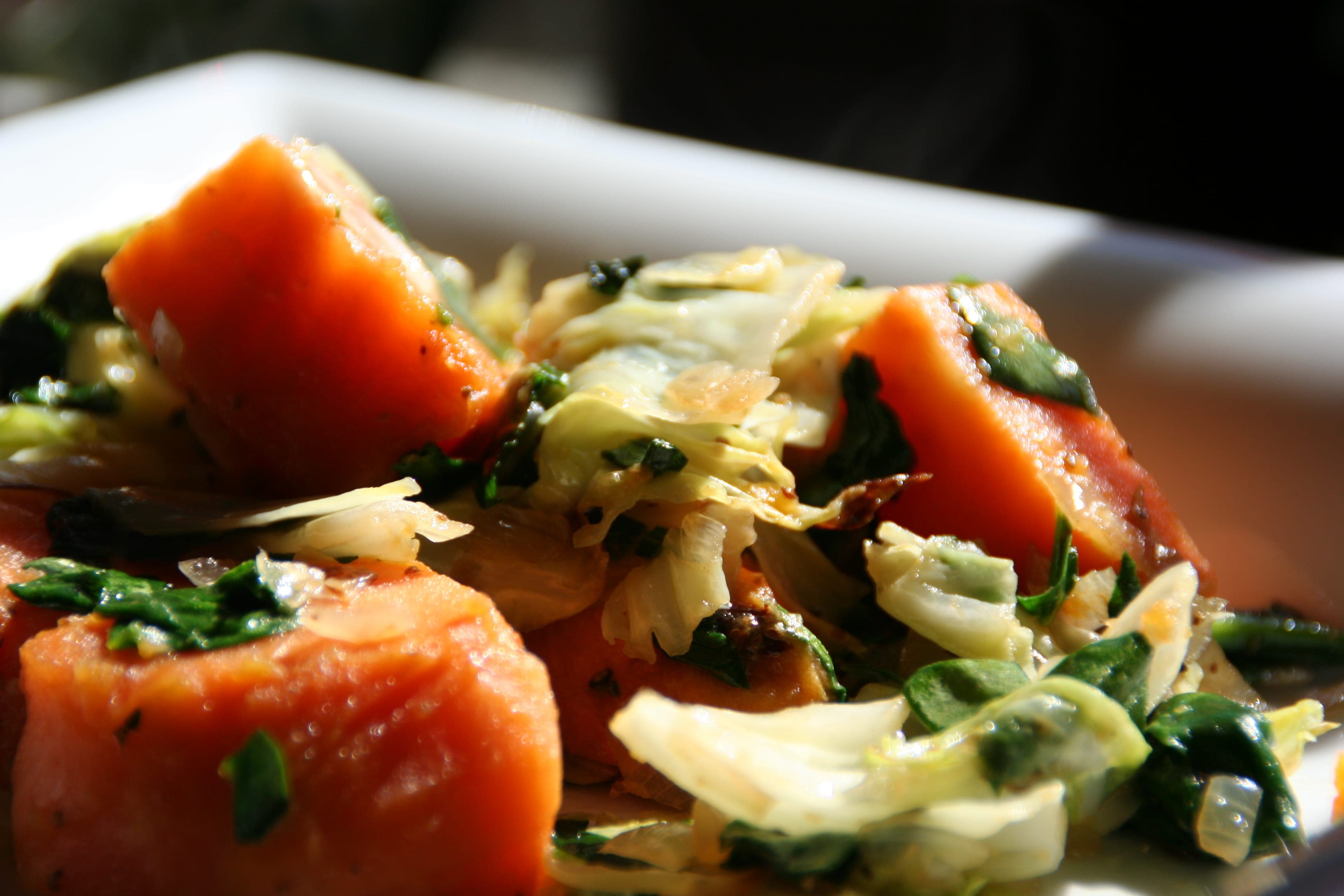 For my updated colcannon, I roasted off a big sweet potato and then put it in the fridge to get completely cold. That way it will be easy to cut in chunks, as well as save me time in the kitchen. You can do the same thing with three medium yukon golds for a more traditional colcannon. If you are ovo-lacto, an Irish Cheddar would be a good thing to shred over the colcannon.

salt and pepper to taste

1. Cut the cold sweet potato into chunks, reserve. In a large cast iron skillet, heat the fat, then add the onion. Stir for 4-5 minutes over medium-high heat to soften and brown a little. Add the cabbage and caraway or celery seeds and keep stirring, let the cabbage get very soft and browned in spots. When it’s all soft and sweet, stir in the sweet potato and stir until heated through, then add the spinach and stir until wilted. Salt and pepper to taste. 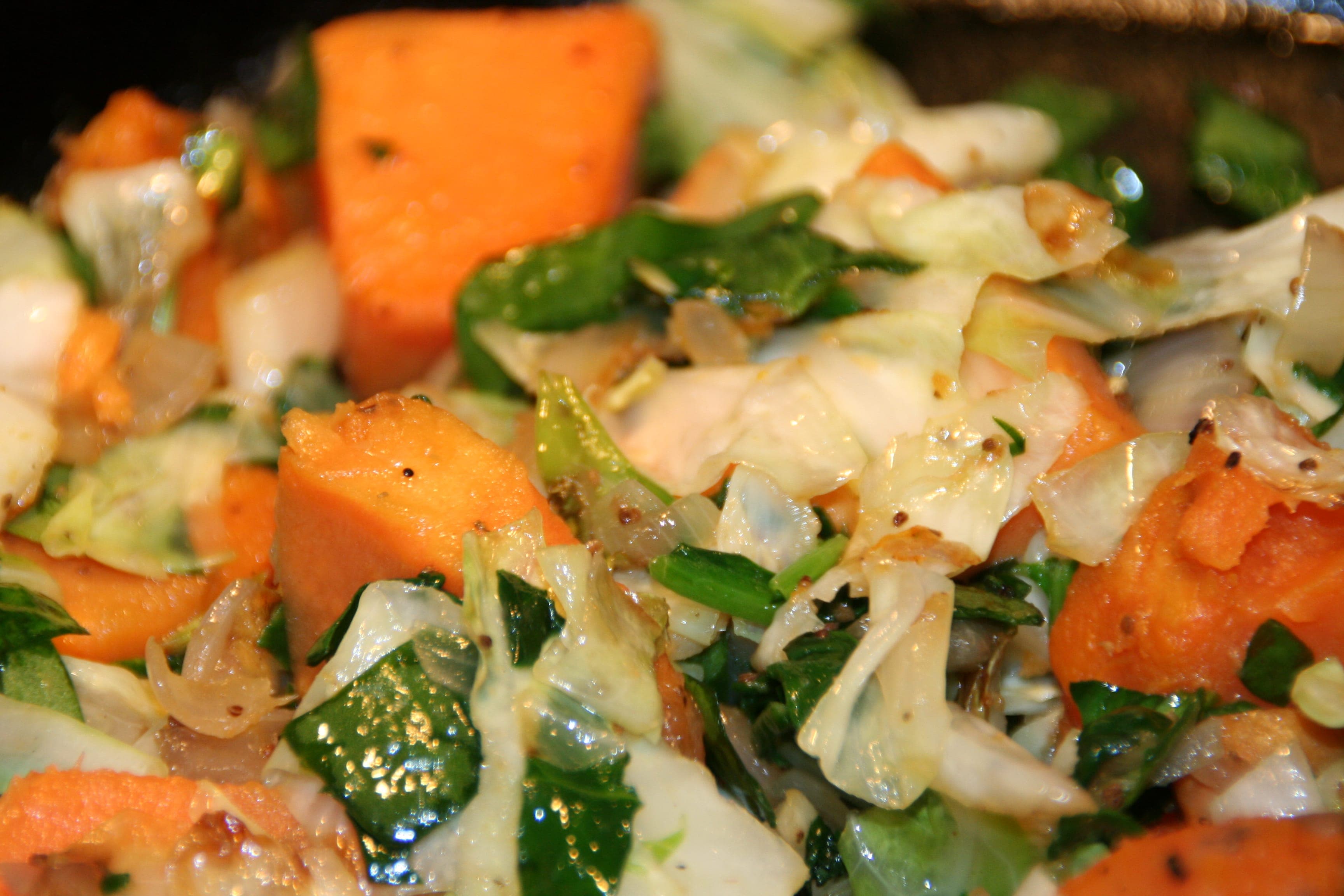 In the cast iron pan, sizzling