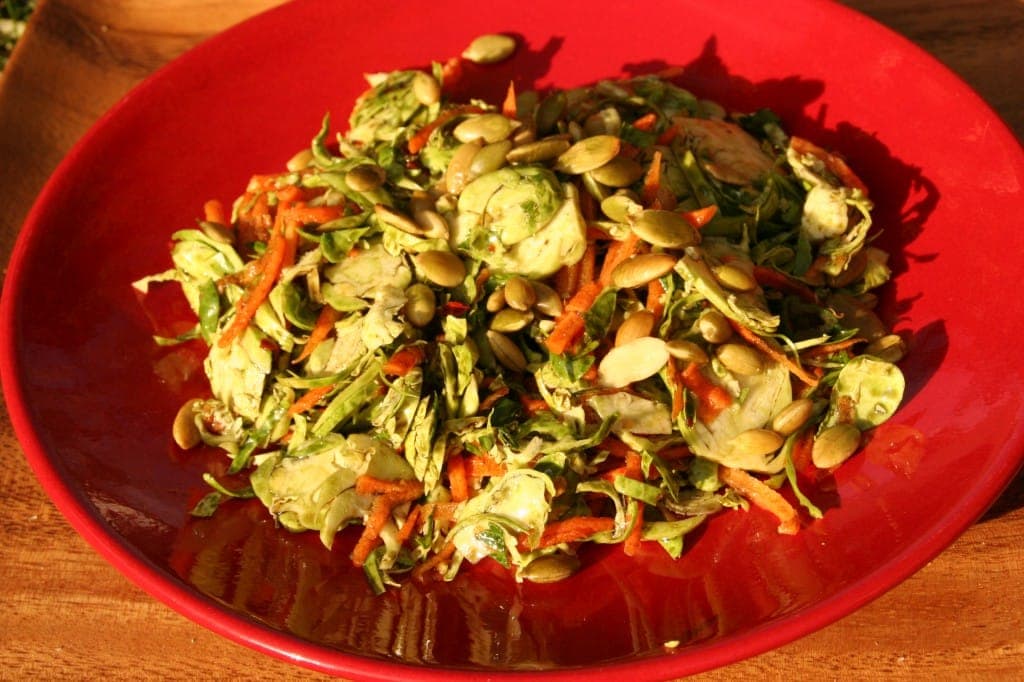 I made the trek to my wintry Farmer’s Market on Saturday, where there was still a surprising wealth of produce. My teeth were chattering as I fumbled with my money with my blue fingers, speed shopping to get out of the cold. Then, I spied a quintessential Fall specialty.

The whole stalks of brussels sprouts, stacked like bulbous mini-trees, are a treat that the farmers usually bring at the end of the season. Before that, they can trim a few of the little round heads off of the tree, and they will grow more, stretching out the harvest from each plant. Bringing the whole stalk in means it’s going to snow soon.

Of course, my farmer friends were right on, it snowed a few days later. 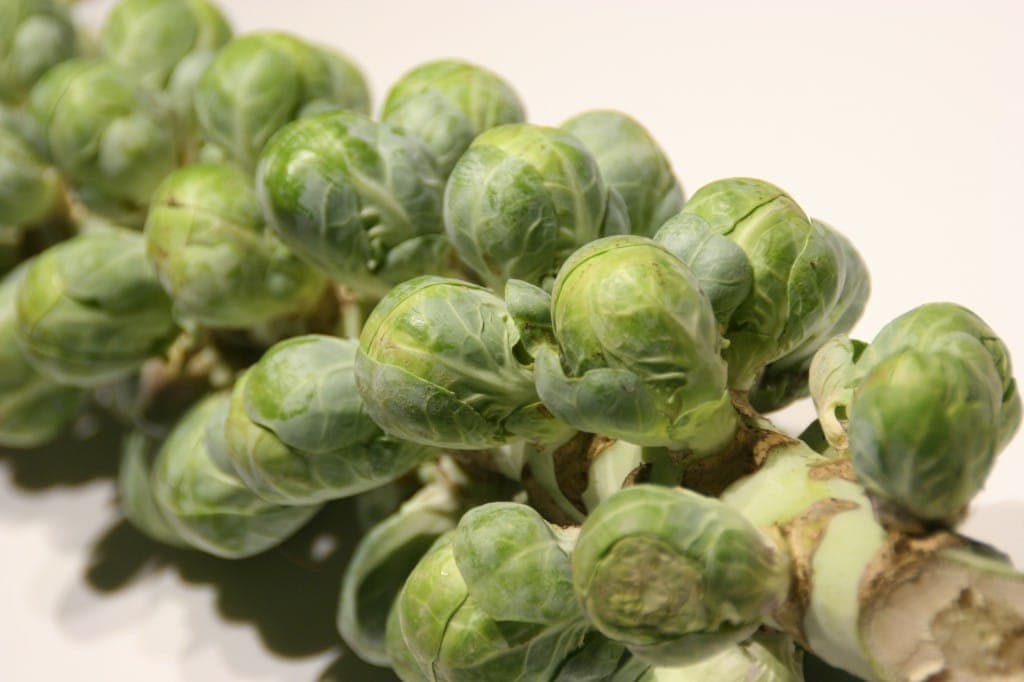 Sprouts on the Stalk

Luckily, I had toted home my stalk-full of brussels sprouts, and was ready to play. Now to be honest, I love roasted brussels sprouts like crazy. It was hard to hold myself back. But you probably already have a few recipes for those, like this one, where I tossed halved brussels sprouts with shallots and maple, and roasted to a golden browned but tender nirvana.

Nope, I wanted to get a salad going that really played up the nutty, sweet flavor of the sprouts. Looking in the fridge, I saw that bottle of fabulous pumpkinseed oil, and the die was cast. Shredded brussels with pumpkinseed oil and toasted pumpkinseeds would be a perfect way to celebrate the intense freshness of these little buds. So, I impatiently lopped off the sprouts and composted the woody stalk.

After that, I felt lazy, so I did all the work with a food processor. Yep, I love my food processor for making sturdy veggies into slaws and salads. Dropping the sprouts thru the feed tube took hardly any time.

Good thing, because I had time to look up the nutrient content of these crunchy little gems. Turns out that they have even more of the anti-cancer glucosinalates that other Brassicas are famous for. Cruciferous veggies are always being studied for the amazing ability of their antioxidants to protect the body. A single cup of brussels sprouts has two days worth of vitamin K and over a day’s worth of vitamin C, and a long list of other nutrients in smaller quantities. Vitamin K and C are both anti-inflammatory, too.

We all suspected that brussels sprouts were good for us, but many of us had early experiences with them that were not good. I know that my first consciousness of them involved being at my Grandmother’s house as she boiled a big pot of them for a long time, creating a sulfurous stink that I can still remember. We now understand that boiling these little guys releases all the stinky sulfur compounds and creates some new malodorous ones, and gives them a sodden, khaki-colored appearance. If you have ever had them served this way, you might think that they are awful.

Thankfully, I moved on and discovered that light steaming or blanching, or my fave, roasting, are the best cooking methods for preserving the charms of brussels sprouts. Raw, they are a little crunchier than white cabbage, which makes them an ideal veg for a salad that keeps. Unlike tender lettuces, which start to perish the moment you dress them, these sturdy slivers stay crunchy for days in the dressing.

You can even saute the leftovers and serve them with pasta or on pizza.

So let’s celebrate the best brussels sprouts of the season together.

You can make this by hand, it will just take a while to thinly sliver all those brussels sprouts. If you don’t have pumpkinseed oil, a dash of toasted sesame oil or another flavorful oil would work.

6 tablespoons pumpkinseed oil (or another nut oil, or a combination with canola)

3 tablespoons sucanat or other sweetener

Set up the food processor with the slicing blade, and feed the brussels sprouts through, pressing lightly to slice as thinly as possible. Switch to the shredding blade, and shred the carrots. Transfer the contents of the processor to a large bowl. Add the parsley and scallions.

In a cup, whisk the pumpkinseed oil, vinegar, cider, sucanat, salt and pepper flakes. Pour over the vegetables, and mix well with your hands, massaging a bit to tenderize the sprouts. Serve or store in the refrigerator.

Good for four days, it just gets better as it goes along.