Brown Rice, Arsenic, and You, and a Great Loaf of GF Bread 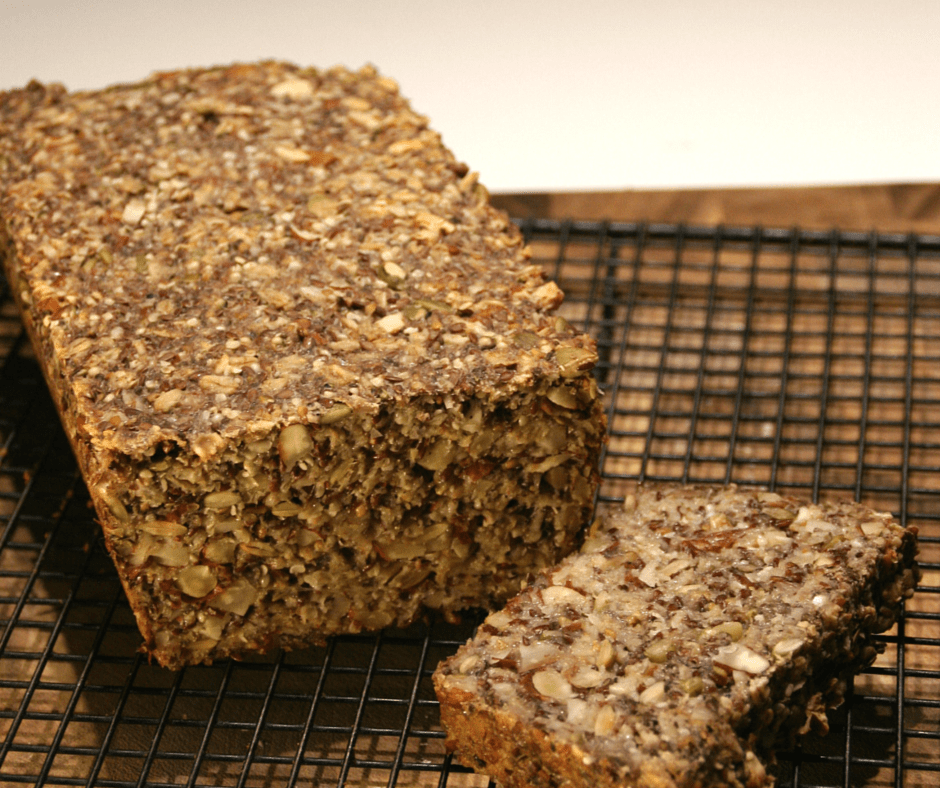 I have to admit, when I heard about rising concerns about arsenic in rice, I went into a denial spiral. “Not brown rice, the soul food of vegetarians everywhere!” I thought, as if the chewy, comforting grains were an old friend, now accused of a crime.

Good old brown rice has been a synonym for healthy eating for most of my life. Sure, there are steel cut oats and quinoa, but brown rice, that is health food for the masses.

But the sad truth is, my dear old friend has an unfortunate proclivity for picking up arsenic from the soil, and it is not a good habit. And while this is a sad day for anyone who loves a good brown rice stir-fry, it’s especially troubling for people eating alot of packaged gluten free foods. Brown rice has been a go-to flour for gluten free baked goods, in part because it has a healthy reputation.

The news about arsenic in rice really hit the news when it appeared in Consumer Reports in 2012. The CR people had analyzed 128 samples of various rices, and combined it with FDA analyses, and found that the levels of inorganic arsenic were high. Way too high.

Turns out that when rice is grown, it needs silica to build its bran layer. In the absence of silica, arsenic will do the job. Inorganic arsenic is naturally occurring in soil, but we have given it a boost by using it in pesticides, and feeding it to chickens. Chicken droppings are made into fertilizer and spread on fields, helping to build the arsenic content of the very soil we are growing our food in.

So, do I have to dump my dear, old friend brown rice? Well, Consumer Reports did another study, and found that if you shop carefully, you can still eat rice.

Brown rice has 80% more inorganic arsenic than other forms of rice, thanks to that bran layer. Fortunately, the arsenic problem is regional. Brown rice from California, India or Pakistan has less, and you can eat up to 1/2 a cup of uncooked brown rice a week and stay at a safe level. White rice from the same regions has less, you can eat 2 1/2 cups per week.

The FDA has weighed in, and has published reports and data, and concluded that there are not short term health risks, but promising to look into the long term effects of eating arsenic. Read a summary here.

So what’s a whole grain eater to do? Well, if you needed a reason to rotate in some other whole grains, this is a good one. Quinoa, Millet, Farro, Barley, all the other whole grains do not take up and store arsenic. For a gluten free diner, look to the naturally GF amaranth, quinoa, millet, buckwheat, corn, and teff.

If you are buying GF products, read those labels and steer away from brown rice based ones, at least most of the time. It’s still ok to have it a few times a week, so if you just love that cookie you found at the Coop, it is probably safe to have three or four a week, provided that you are not eating the max of brown rice in other dishes.

This issue is most serious when it comes to feeding babies and small children. Hot rice cereals and rice cakes are now not recommended, with one serving of either providing all the arsenic that they could safely consume in a week. Those developing brains and bodies need to be protected.

So, to cheer myself up, I decided to try baking a rice-free gluten-free loaf of bread. This one is based on a recipe from Josey Baker, a very talented baker in San Francisco. His book, Josey Baker Bread is a fresh and exciting take on bread in general. This bread has gotten quite a bit of interest, in part because it is a gluten-free bread that doesn’t try too hard to be like regular bread. Instead, it is chock full of nuts, seeds and oats, and held together with flax and psyllium, not xanthan gum or starch. 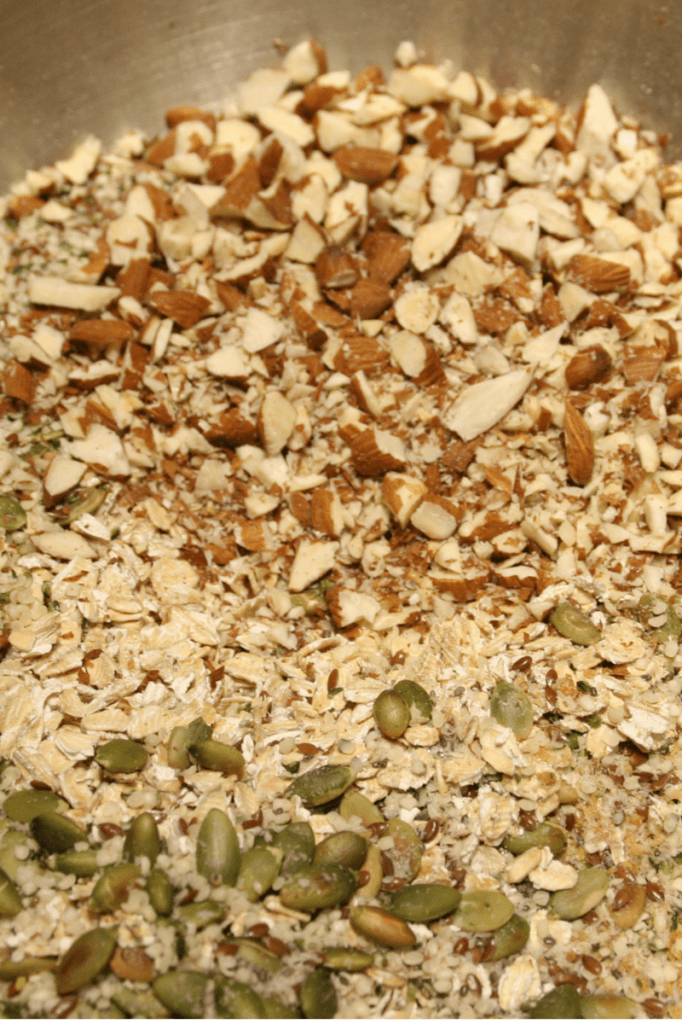 This is going to be bread, I promise

Bold move. I couldn’t leave well enough alone, though, so I tweaked it a teeny bit, using half ground flax instead of all whole, subbing hemp for part of the sunflower seeds, using more almonds and pumpkinseeds than the recipe called for. It’s still his basic architecture. 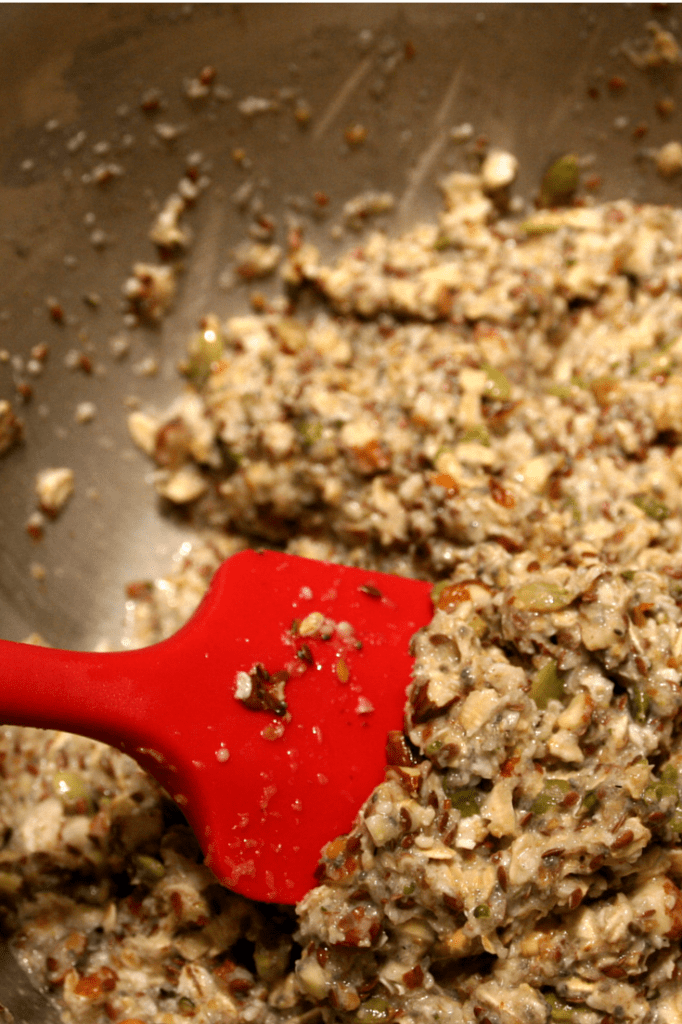 It will, after a few hours of sitting in a bread pan, form a loaf, it really will. 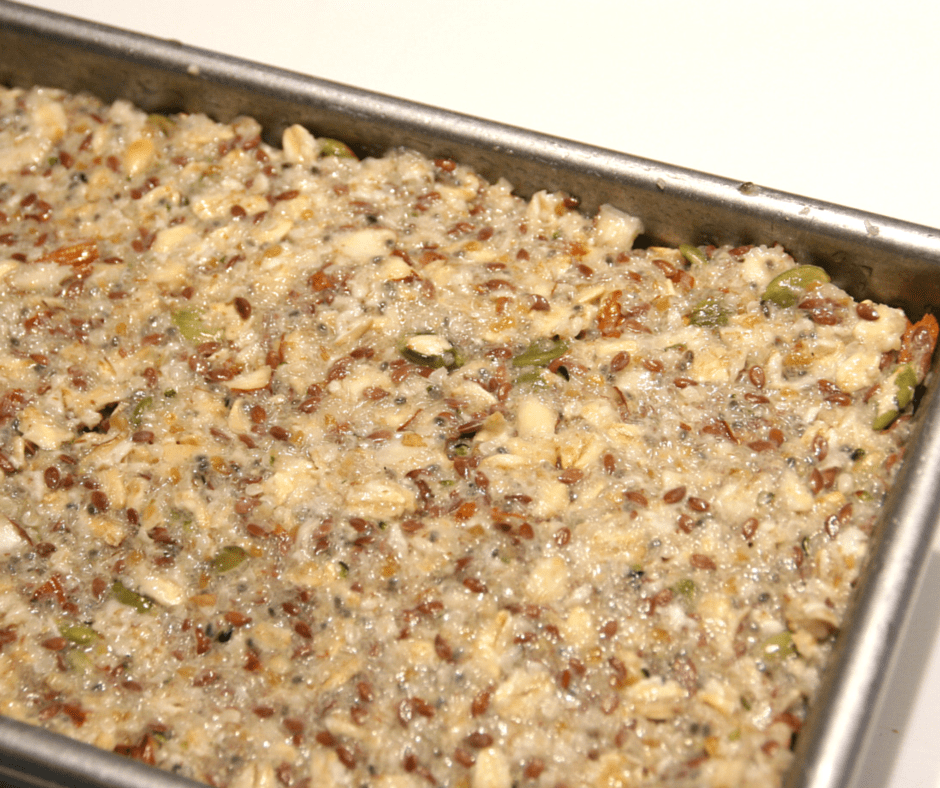 Smooth the Top and Chill Out

So if you are skipping all those brown rice flour breads you used to eat, try making this. It’s sturdy, hearty, and a slice slathered with your spread of choice is definitely worth $4.

1. Toast the almonds and pumpkinseeds, either in a saute pan on the stovetop over medium-low heat, or in a 350 degree oven. Leave the seeds whole, coarsely chop the almonds. Let cool.
Combine the oats, hemp, whole ang round flax seeds, psyllium husks, chia and salt in a large bowl, add the cooled almonds and pumpkinseeds and stir. In a medium bowl, stir the maple syrup, olive oil and water, then stir into the oat mixture. It will seem watery, you need to get in there with your hands and squeeze and mix to get the ingredients to hydrate. When it thickens to a porridge consistency, oil a loaf pan and scrape the mixture into the pan. Smooth top, then put the whole pan in a plastic bag or cover with wrap, and put in the fridge for at least three hours or overnight.
Bake at 400 F for an hour, then gently tap out of the pan onto a rack and cool for at least two hours before slicing thinly. 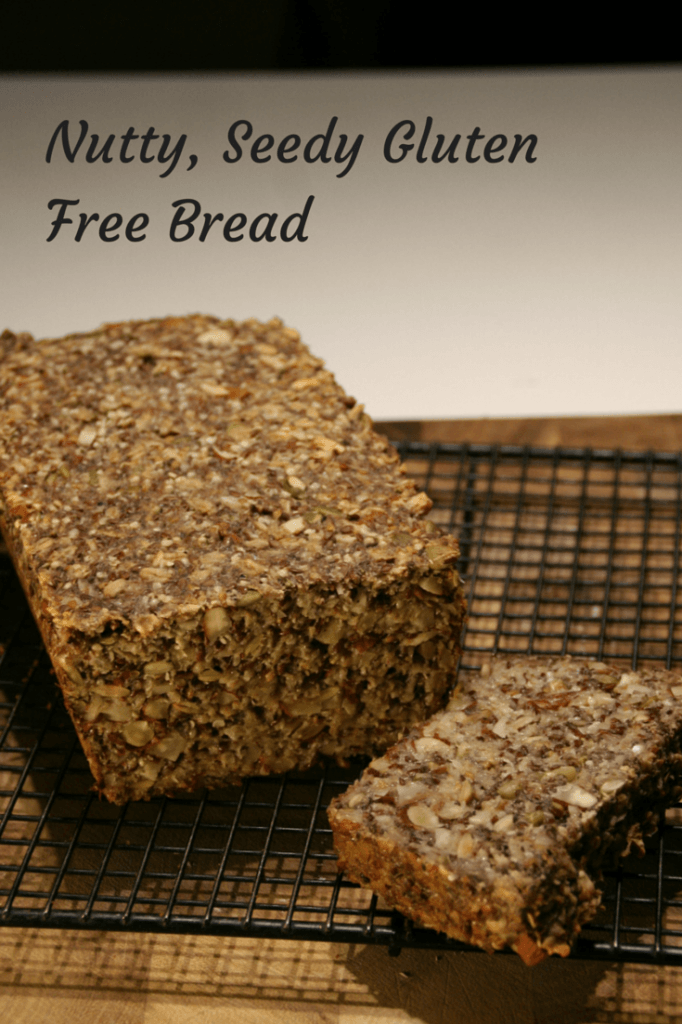