Sandor Katz and the Art of Fermentation 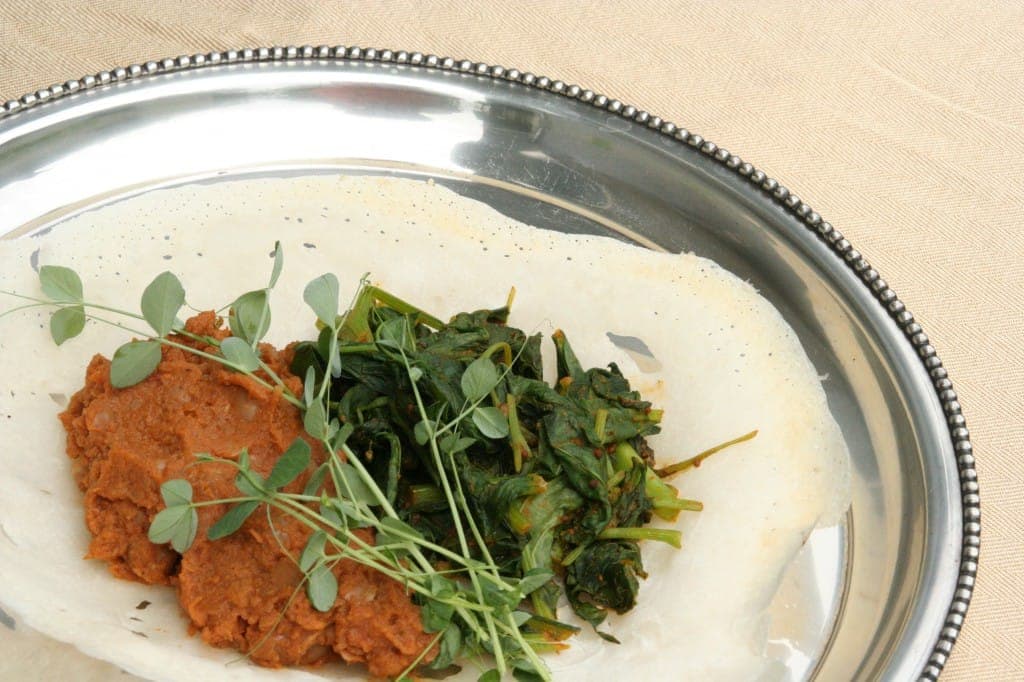 My Hopper with Kale Mallung and Chick Pea Curry

Jump in the way-back machine, and come with me to 2003. I’m working on my monthly column for the local Twin Cities Wellness paper, looking for stories. A friend asks me if I am going to see the sauerkraut demonstration, by some guy with a book.

Well, I got a copy of the book, and  I went to the demonstration, and met a brilliant and charming kraut maker, Sandor Ellix Katz. His first book, Wild Fermentation, had just hit bookshelves, and he was making his way across the country, couch surfing, making kraut and meeting fellow fermentation enthusiasts wherever he could. He even had time to meet me for coffee the next day and let me interview him for an article.

I remember being blown away by the book, and having that ominous feeling that I was present at the beginning of something important. Turns out I was right, and it became the DIY bible for a movement that is still growing today. Ever wonder why kim chi, pickling everything, and kombucha are officially trends? Well, Wild Fermentation certainly tapped into and fed a hunger we didn’t know that we had. Sure, the natural foods people had our miso and our yogurts and our unpasteurized krauts, and there were artisans making fermented foods in little pockets of the country. But here was a book about making your own champagne, cheese, tempeh, rice bran pickles, and just about every conceivable food that is improved by time spent with bacteria.

You see, Mr Katz is more than just the guy who told us how to mix up cabbage and salt and wait. Wild Fermentation had much bigger ideas to share. Katz presented his macro philosophy, in which eating foods fermented by the bacteria that surround us makes a body more in tune with its environment. For Katz, those bacteria, which we call cultures, serve as metaphors for ideas, ideas that ferment within our intellectual culture, bubbling and growing. Fermentation is a microscopic version of what happens when people inoculate each other with thoughts.

So zoom forward to today. Sandor Katz has sold over 125 thousand copies of Wild Fermentation, which has been translated into Korean and Spanish, and he still travels the country, calling himself a “fermentation revivalist.” And after a solid run with Wild Fermentation serving as the fermenter’s bible, he has come out with a sequel. his new book, The Art of Fermentation, An In-Depth Exploration of Essential Concepts and Processes from Around the World (Chelsea Green, $39.95)

I caught up with him again, in SanFrancisco, where he was one of the presenters at the International Association of Culinary Professionals. 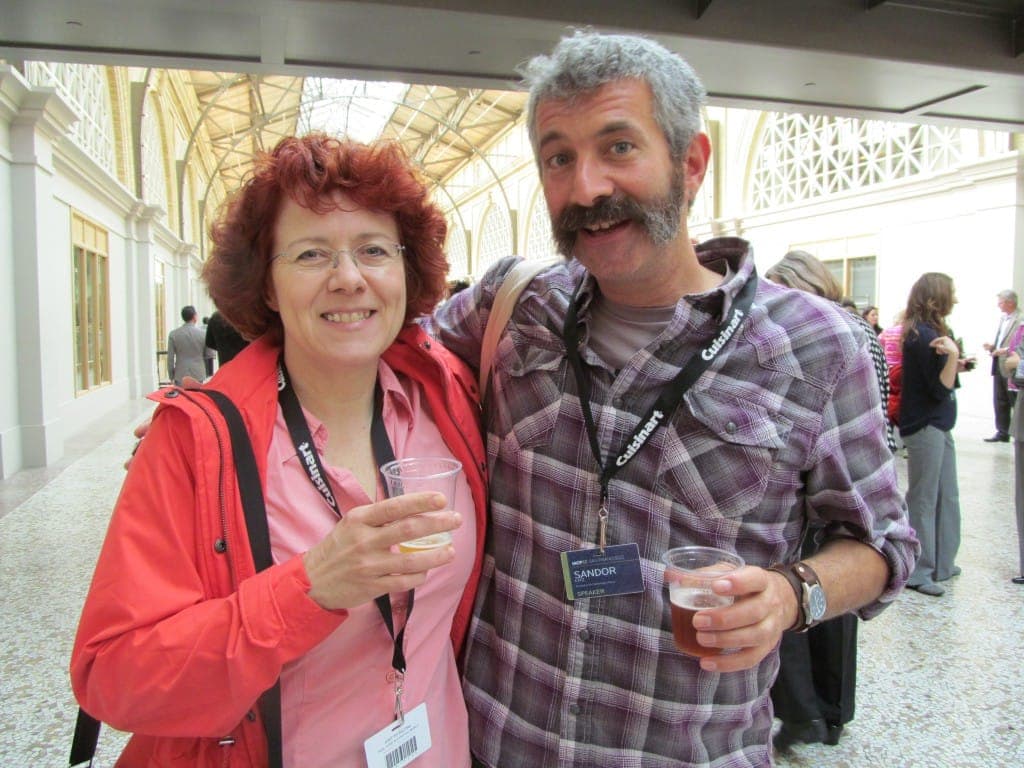 Ten years later, Mr Katz is a revered expert, who travels the world and speaks to groups like ours, consults on fermentation businesses, and generally spreads his culture everywhere. He also maintains a website and blog where he and all his fermentation followers share information and experiences as they try out different ferments.

He had this to say, when we got around to talking about the books: “It is thrilling to see the huge growth of interest in fermentation. It seems like home production, fermentation awareness and education, and artisan production are all on the rise, as is news about the importance of bacteria in our bodies and environments. From the moment Wild Fermentation came out, I have perceived that there was great interest in fermentation. Ferments have always been among the most popular of foods (and beverages). Yet, like all aspects of food production, fermentation largely disappeared from our households and communities during the 20th century. Because this coincided with the first emergence of knowledge of bacteria, primarily as agents of disease, many people became terrified by the idea of fermentation, because it involves microbes, and quickly came to imagine that it is extremely dangerous and best left to qualified technical experts, despite the fact that almost everybody almost everywhere loves fermented foods and beverages and enjoys them frequently. ”

The new book, The Art of Fermentation, is another classic. Unlike the paperback that many people wore out and had to replace, this one is a hefty hardback, and it’s an exhaustive resource, yet again. Don’t expect the kind of bullet pointed, measured to the quarter teaspoon recipes that have become the norm. Fermentation is experiential, so the recipes are written in more of a narrative style. Start by reading in deep detail about exactly what is going to go on in the microscopic ecosystem you are about to populate, then follow the story and do it. Read on about how to maintain and what signs to watch for. It might take longer, it might develop a funny smell, and Mr Katz has seen it all, and walks you through with a calming sureness and irrepressible playfulness.

So, if you have any interest in learning about the long history, health benefits, and processes of fermentation, get the book.

It’s The Book, this one.

I opted to make a relatively quick and easy recipe from the book, a kind of Sri Lankan Bread called Hoppers. It involved cracking a coconut and making coconut milk, so that might seem not so easy, but it only took a couple of days. Next time I will use brown rice, and possibly try it with canned coconut milk to make it really easy.

1 pound white or brown rice or a mix, not sticky rice

yeast (the book has other options, but I had yeast)

1. Soak the rice overnight in cool water. Take your coconut outside and use a hammer and a nail or screwdriver to puncture the three “eyes” at one end. Pour out the water inside into a cup. Crack the coconut into pieces and take it back inside. Rinse the pieces and pare out the white meat. Use a box grater or your food processor shredding attachment to grate the coconut. Put the coconut in a large bowl and pour about 2 cups boiling water over it. Let stand until cool, stirring occasionally. Using a thin kitchen towel to line a wire strainer, strain the liquid into another large bowl. Bundle the towel around the coconut and squeeze it out into the bowl, extracting all the coconut milk.

2. Put the coconut back in the first bowl and pour about a cup of boiling water over it, repeat to make a little more coconut milk, then discard the pulp, or use it for something else. Mix the reserved coconut water with the coconut milk.

3. Drain the rice and grind the rice in a blender or food processor until smooth, adding a little coconut milk as needed. Transfer to a bowl, add about half a teaspoon of yeast, a teaspoon of agave, and stir in a little more coconut milk to make a soft dough. Cover with a towel and let rise until doubled, several hours. At this point, you can put it in the fridge overnight. 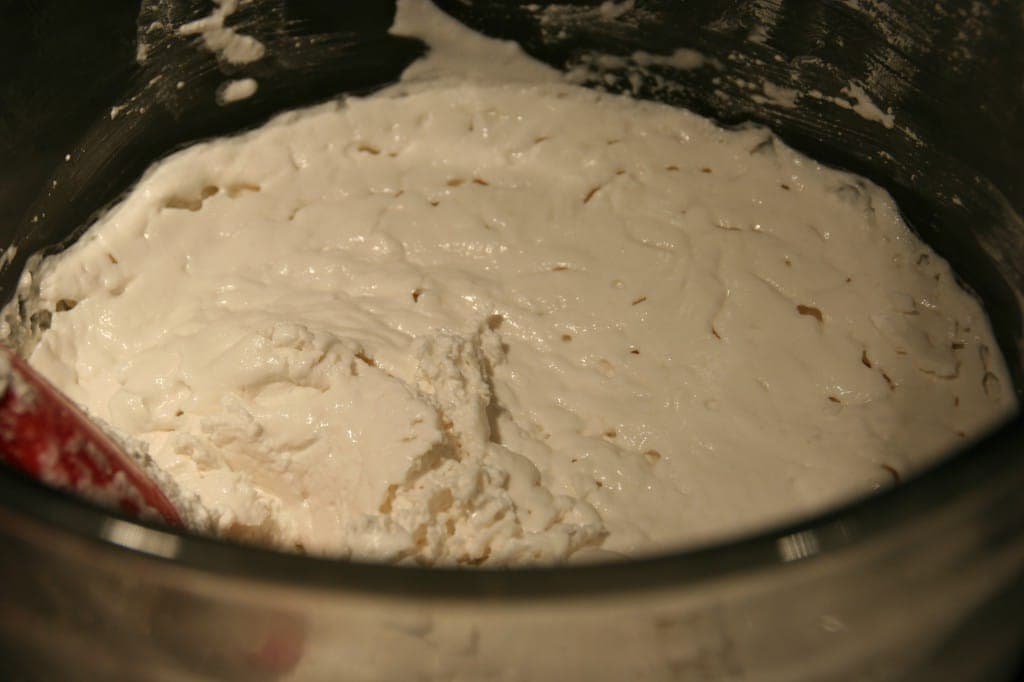 4. At least an hour before making hoppers, get the dough out and let it warm to room temp. Whisk in coconut milk to make a batter slightly thinner than pancake batter. Salt to taste, a big pinch or so. Heat a wok over high heat, and when hot, drizzle the batter around the pan so that there are thin, high sides and a thicker, pillowy bottom. Reduce the heat to medium low and cover the pan, to steam the bread in the bottom of the pan. Check every few minutes, the sides should get slightly golden brown and pull away from the pan, and the middle will rise and set. 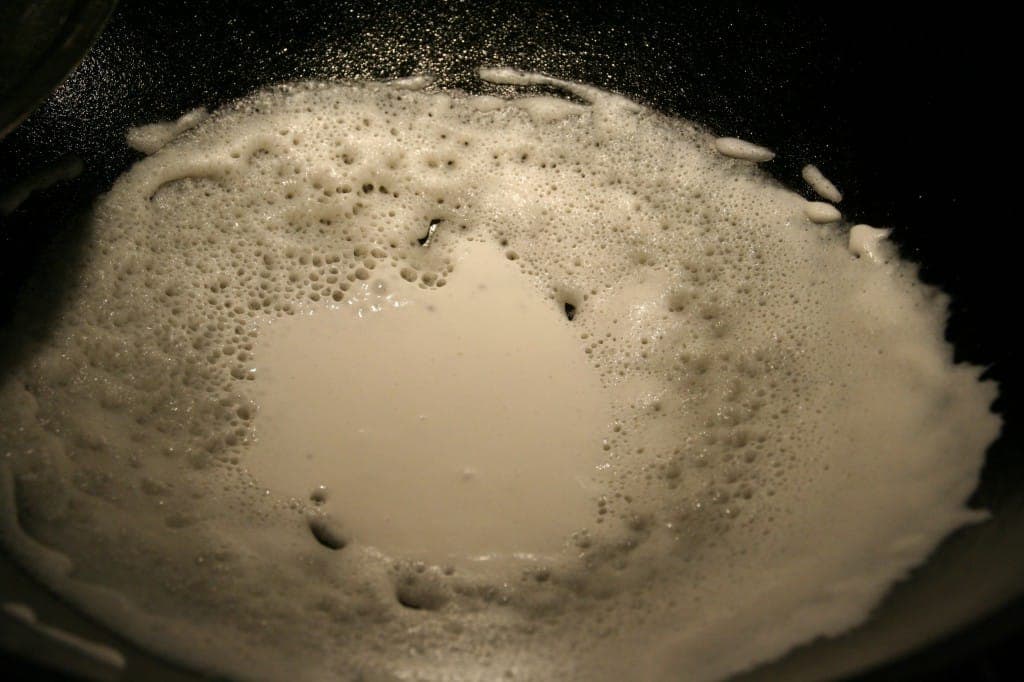 In the Pan, Halfway Done

5. Serve your hoppers with curry and sambals. 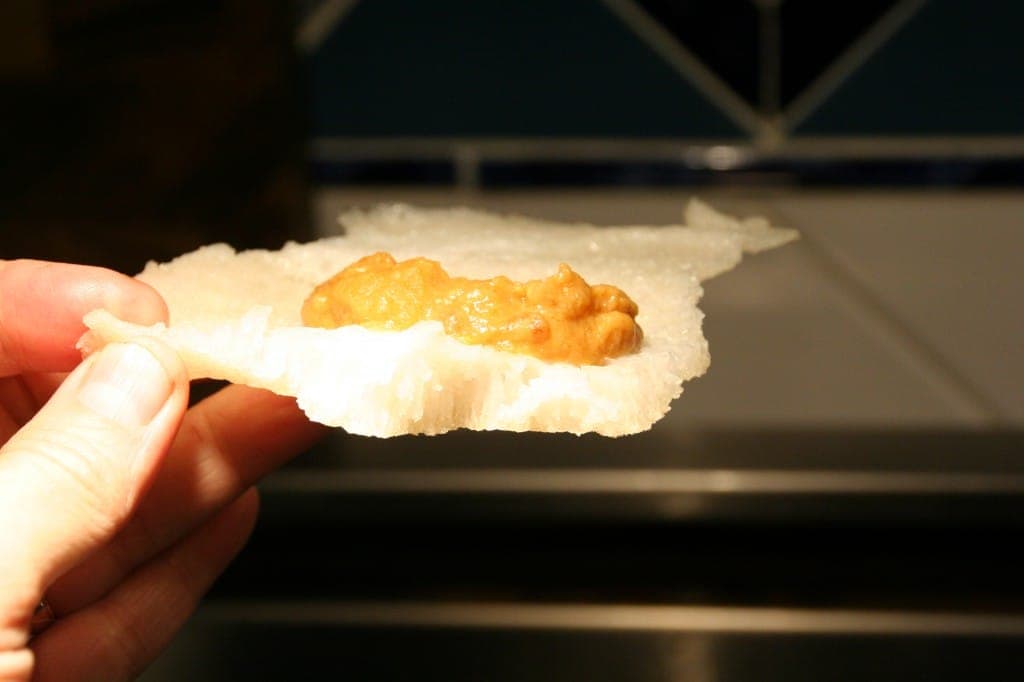 The Pillowy Bottom of my Hoppers