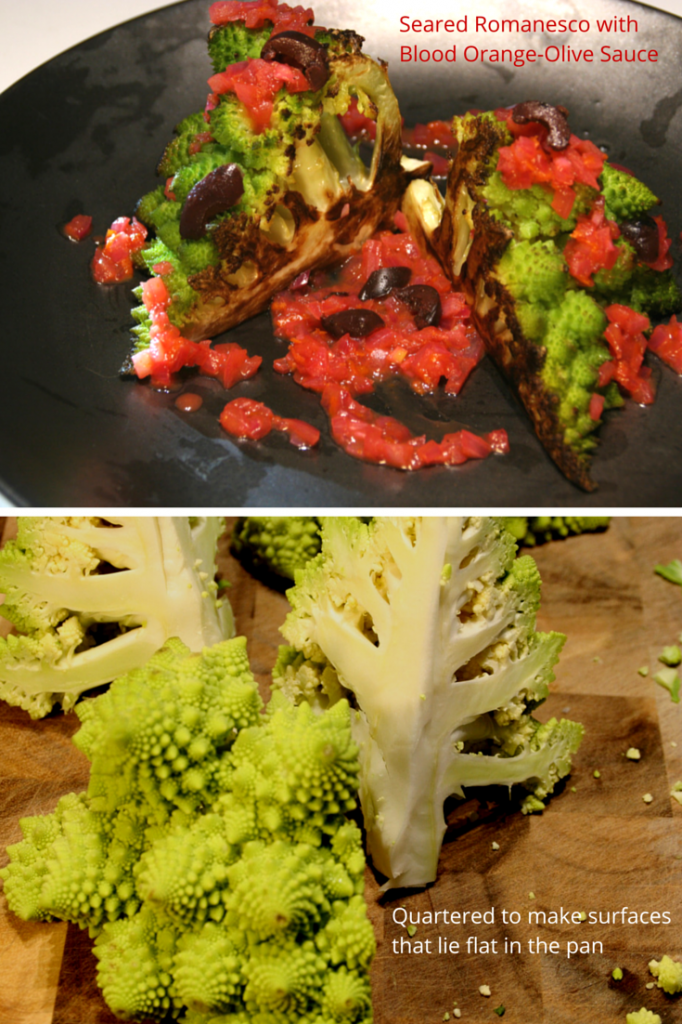 All that geometry makes a dramatic dish!

I recently had the pleasure of interviewing Kate Jacoby, co-owner and pastry chef at Vedge A vegetable restaurant in Philly. It was for an article about the trend in cooking vegetables more like the centerpiece of the plate, not the side. In the course of the interview, she described a dish that they make at Vedge with Romanesco. I couldn’t get the image out of my mind. I was so inspired by her ideas that I decided to try to make my own version of the concept.

Now mind you, the one at Vedge gets a blanch in seaweed infused stock, then it’s grilled over smoke,then seared to make a deeply flavored, complex centerpiece. I thought maybe I could just borrow the shape and the sear, and come up with my own sauce. At Vedge, this Romanesco is on a plate with a rouille sauce, saffron cream, a quenelle of roasted cauliflower and potato puree that has been sauteed to caramelize the exterior, and some shaved cauliflower, broccoli and Romanesco.

As Jacoby put it, “Steak used to be the most luxurious thing, but now people are looking at coconut water and goji berries as the way to pamper yourself. Meat is not the most interesting thing and not the only status symbol. You have to think about what you want to put into your body, too.”

Here is a link to the cookbook from the restaurant, Vedge  100 Plates Large and Small That Redefine Vegetable Cooking.

So, with all respect due, here is my Romanesco. You could use a small cauliflower, if you don’t have access to Romanesco. The Romanesco is a brassica that traces its origins to the area around Rome in the 16th century. People love to debate whether it is a broccoli or a cauliflower, but it really doesn’t matter. It’s often called Romanesco Broccoli, or cauliflower, there was even an attempt to rename it brocco-flower at one point.

It is its own, unique vegetable. Resembling a cauliflower whose rounded florets have gone cubist, the Romanesco defies our concept of a vegetable. In a fascinating quirk, the florets are arranged in perfect fractals, cascading in orderly geometric repetition from the tips of the florets. The quirky beauty of the vegetable makes it a perfect subject for a treatment like this.

This shows off the shape, and also a uniquely charming flavor. The Romanesco has a milder, sweeter flavor than a standard cauliflower or broccoli. Like the Vedge version, I’m going to blanch it, which denatures and removes a bit of the strong flavored chemicals in all the brassicas. Then in the sear, we can get a bit of bitterness and char, which makes the sweetness more apparent, by providing contrast. Then, a roast in the oven caramelizes and concentrates the whole affair, taking the vegetable into a whole new level of complexity.

Once that is all built, a sauce full of tangy blood oranges and funky olives is going to call out the underlying subtleties of the Romanesco. 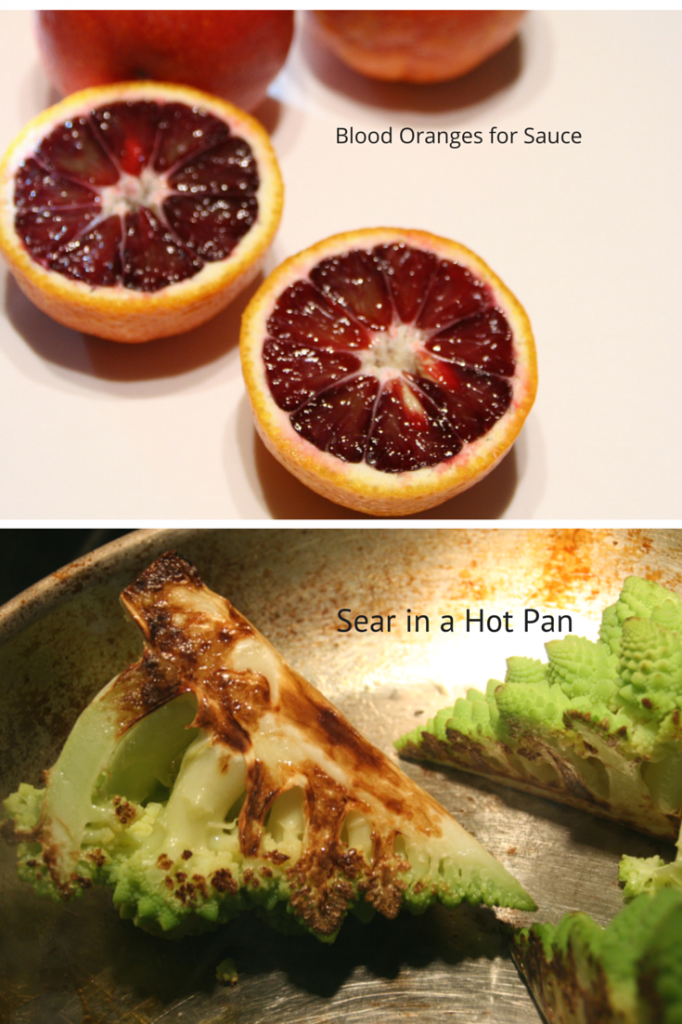 So, since I can’t make it to Philadelphia to try the Vedge Romanesco, I’ll just have to make do with this. It’s got all kinds of flavors, and the presentation will wake you up from your side dish slumber.

Oh, and give everyone steak knives. They will get to carve each bite from the big, juicy roast.

1. First, trim the base of the romanesco to make it stable, and remove any leaves, rinse it to remove any dirt. Set it down on the base, like a pine tree, and cut it in half cross the highest point, then lay each side flat and slice in half again. Brain a large pot of water to a boil and salt it. Drop in the romanesco quarters and blanch for about 4 minutes, 5 if  it was a particularly large romanesco. Drain, let cool, and pat dry.

2. Preheat the oven to 425 F. Lightly oil a sheet pan with canola oil. In a large skillet, heat canola oil over medium-high heat until shimmery, then place the romanesco in the pan, cut sides down. Sear, without moving, for about 3 minutes, then peek to see if it is browning. When the bottom is deeply browned, turn the vegetable and sear the second side. If desired, you can turn it to brown the tips, but it is not as pretty that way. Place the browned veggies on the sheet pan and roast for about 30 minutes, until a paring knife inserted in the stem of the vegetable slides in easily.

3. While the romanesco roasts, heat the olive oil in a small saucepan over medium heat. Add the shallots and orange zest and stir. Stir occasionally and cook for about 5-10 minutes. When the shallots are very soft, add the juice and stock and raise the heat to bring to a boil. Cook, uncovered, to reduce by half, about 5 minutes. Stir in the olives, salt and pepper.